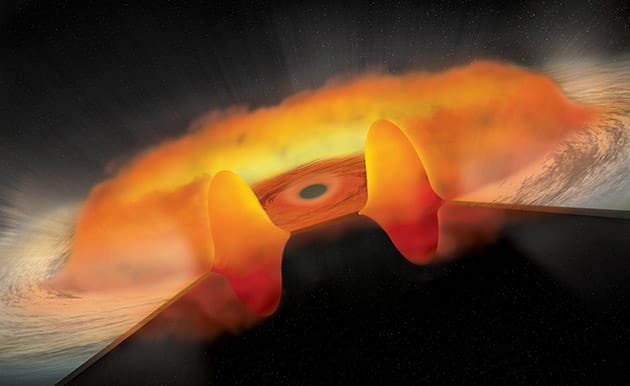 According to a new study using NASA's Chandra X-ray Observatory, there's a breed of supermassive black holes out there a lot more ravenous than usual. Supermassive black holes are found in the middle of galaxies, measuring millions to billions of times the mass of our Sun. Some of them actively consume gas and dust, which form a "disc" around the mass -- as matter from that disc fall into the black hole, a jet of particles stream out, appearing as cloudy streaks. These are called quasar black holes, and they usually shine more brightly than the galaxy itself, since that disc radiates huge amounts of energy. The ones discovered by Bin Luo and his team of astronomers, however, "[dine] at enormous rates, at least five to ten times faster than typical quasars."

The group looked at data collected from 51 quasars being observed by Chandra and found that 65 percent of them appear around 40 times fainter in x-rays. These quasars also seem to exhibit low carbon emissions at ultraviolet wavelengths. Using those info, the team ran a simulation and concluded that some quasars are extremely hungry beasts that attract copious amounts of gas and dust, which tend to form a donut instead of a disc around the black hole.

These donuts shield gluttonous quasars from prying telescopic eyes, which is why they appear fainter to Chandra. "If a quasar is embedded in a thick donut-shaped structure of gas and dust," said team member Jianfeng Wu, "the donut will absorb much of the radiation produced closer to the black hole and prevent it from striking gas located further out, resulting in weaker ultraviolet atomic emission and X-ray emission."

It's very much possible that these ravenous black holes are growing at a much faster rate than others and might have been more common right after the Big Bang. That probably explains why the scientists found so many among the quasars they studied, which are all located 5 to 11.5 billion light-years away. To note, not all supermassive black holes are quasars -- our own galaxy's isn't. It's not gobbling up matter at the moment, though that could change once the Milky Way collides with Andromeda in around 4 billion years.

Source: NASA, Cornell University Library
In this article: BlackHoles, ChandraX-rayObservatory, nasa, space
All products recommended by Engadget are selected by our editorial team, independent of our parent company. Some of our stories include affiliate links. If you buy something through one of these links, we may earn an affiliate commission.