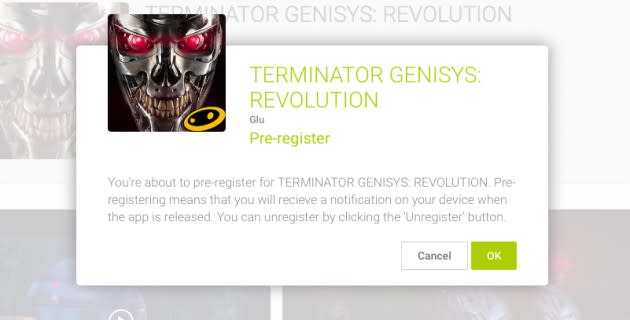 Starting with Glu's Terminator Genisys: Revolution mobile game, you can now pre-register for apps from the Play store. Now if a developer wants to drum up some interest before an app release, they can stick a placeholder page in the store where users can sign up and receive an alert on their phone when the app is actually released. This is obviously handy for users, but it can also help devs gauge interest in their apps before they're released.

In this article: alerts, android, google, googleplay, mobilepostcross, preregistration
All products recommended by Engadget are selected by our editorial team, independent of our parent company. Some of our stories include affiliate links. If you buy something through one of these links, we may earn an affiliate commission.