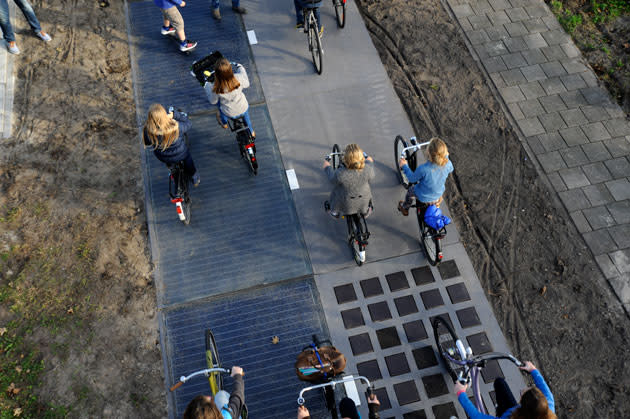 Back in November, SolaRoad launched a test bike path that generates energy through solar cells embedded in the concrete. It sounds like an outlandish idea, but it's apparently paying off very quickly. The company has revealed that its road has generated much more energy than expected -- it produced 3,000kWh of electricity in the space of just six months, or enough to power a single person's home for a year. That doesn't sound like much, but SolaRoad notes that its path only covers a 230-foot stretch in a Dutch village. You'd get a lot more energy from longer, wider roads.

Things haven't been going perfectly. The coating on the solar cells' protective glass tends to peel off when the weather changes, for example, suggesting that the path could be expensive to maintain as-is. However, the project is going to last for another two and a half years. SolaRoad believes that it'll have plenty of time to iron out the kinks, and it's confident enough that it plans to test its technology on small municipal roads in the future. Between this and Solar Roadways in the US, you may soon find cycling routes that are as much about saving the environment as getting you from A to B.

In this article: bicycle, bike, cycling, energy, path, road, solar, solaroad, solarpower, transportation
All products recommended by Engadget are selected by our editorial team, independent of our parent company. Some of our stories include affiliate links. If you buy something through one of these links, we may earn an affiliate commission.