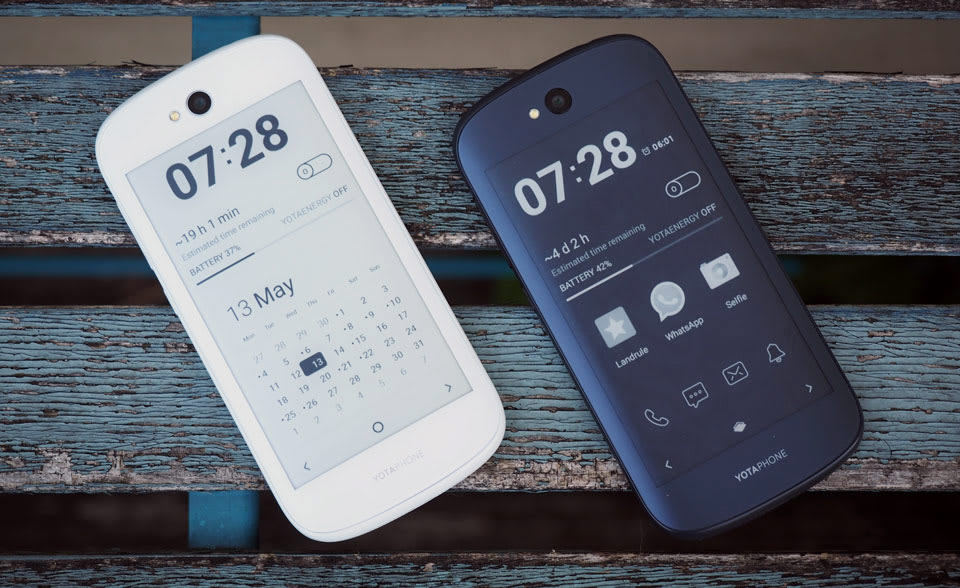 The YotaPhone 2, with AMOLED on the front and E Ink on the back, is already quite a striking handset thanks to its dual-screen design. Though not striking enough, apparently, or at least not as openly eccentric as the new, white version of the device launching today. And a different color scheme isn't the only thing Yota Devices has to announce this morning. The price of the YotaPhone 2 is also dropping significantly in Europe from today, regardless of what model you're eyeing up, and all current owners will be pleased to hear that an update to Android 5.0 Lollipop has begun rolling out. In addition to Google's improvements, the new version also includes a bunch of YotaPhone-specific tweaks that let you do more with the E Ink display. The new, white YotaPhone 2 isn't just a straight reversal of the all-black model. In fact, only the plastic on the rear and sides of the device have changed hue. The front panel has remained black for a number of reasons. Firstly, prototyping told Yota that a black front is just easier on the eye, especially when framing an AMOLED display since it accentuates the high level of contrast. And second, the company didn't care to blindly reskin the handset. It wanted to create something a little bit different, which is part of the reason the YotaPhone 2 exists in the first place. And different, it is.

A switch from black to white plastic is obviously the most apparent change, but a couple of other parts have been tweaked to make the new color scheme work. The power key and volume rocker are now brushed metal, as is the detailing around the primary camera, and the small YotaPhone logo on the E Ink side is now silver instead of white. I can't deny it's a more eye-catching build, especially with the juxtaposition of the black face, but it's a bit too ostentatious for my liking. In my opinion, the all-black model is pleasantly understated in comparison, and I'd be worried the white plastic would show signs of wear and tear much quicker. 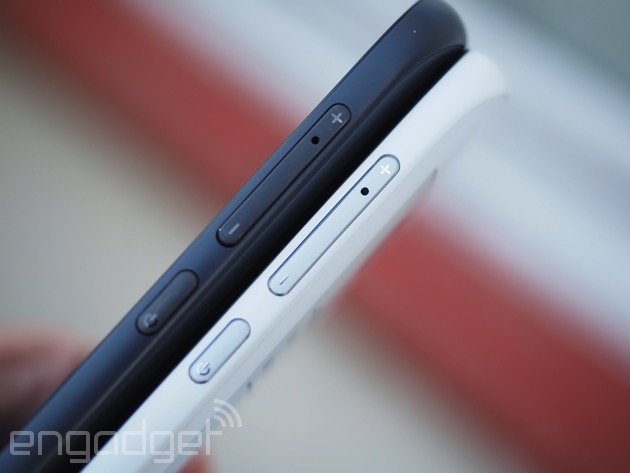 I can easily see, however, how the more extravagant white version might take your fancy. And Europeans after a new YotaPhone 2 are in luck, as it's receiving a significant price cut today. Both the black and white models are now on sale in the UK for £440 (£115 off the launch price), and elsewhere in Europe for €599 (€100 less than at launch) through Yota's online store. The white version can also be purchased online in certain CIS and Middle Eastern countries where the black model is available, but at full price, though Yota hopes to extend the price drop to these markets as soon as possible. If you're wondering about US availability, I'm told the plan is to launch an Indiegogo campaign sometime this month to facilitate a North American launch in July.

In addition to the new exterior, Yota has been working on improving the software side of things, too. One development that's already available on the all-black model, even if you haven't spotted it yet, is a new "white theme" for the E Ink display. Quite simply, it's an inverted version of the YotaPanel UI that runs on the E Ink side, so what was black is now white, and vice versa. It was created so that YotaPanels looked better and more natural on the new white version of the handset, but you can use either theme on both models.

More importantly, though, the YotaPhone 2 is being updated to Android 5.0 Lollipop. The white model comes with the latest version as standard, but all-black units currently out in the wild will start receiving it from today. It's being issued OTA in stages, mind, so it might take up to 10 days to reach your specific handset. In addition to all the good stuff that comes with Google's latest mobile OS version, Yota has taken the opportunity to overhaul its own software that runs on the E Ink side (when you're not in full Android mirror-mode). And I'm told almost all the improvements are the direct result of user feedback. 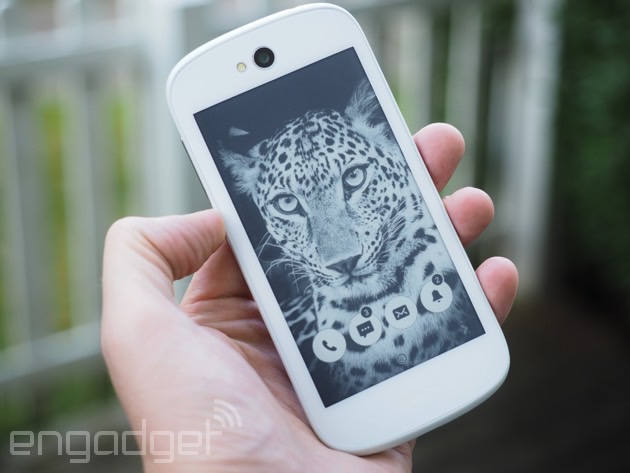 The company's custom software used to be layered, with what's called a YotaCover up front, and widget-filled YotaPanels beneath (you might want to check out my full review of the YotaPhone 2 to brush up on the old layout). The YotaCover used to function as kind of a lockscreen, showing background images the user selects and an overview of unread notifications if you allowed it. You'd switch between the YotaCover and YotaPanel UI using an on-screen key, but this was apparently thought to be confusing and unintuitive. So, YotaCovers and YotaPanels are now on the same level rather than tiered, letting you swipe between them, and that onscreen key is now a home button. Thus, you can select any Cover or Panel to be your E Ink "home screen."

Setting up YotaCovers is a tad easier in the latest iteration of the YotaHub app, which is what you use to manage everything that happens on the E Ink side. YotaCovers can pull images from the device, Facebook, Instagram and Google+, and change them automatically as quickly as every five minutes (you can still have multiple Covers with different rules and different image sets). Before, this was a cumbersome process. You'd have to select an individual service, and then the pictures you thought appropriate to broadcast on the back of your phone. Now, all sources feed into a central gallery, meaning you only need to thumb around the one screen to pick a bunch of images you want. Exploring all your pictures on any given service still requires a few more taps, though. 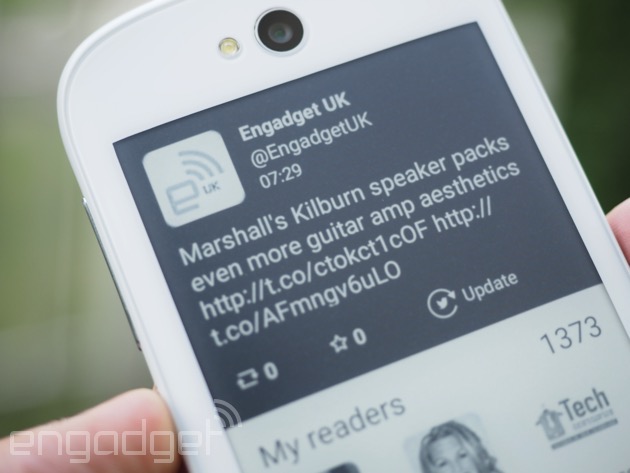 There are new Cover options, too, some of which are more like full-sized widgets that won't fit into any of the YotaPanel grid layouts. These include Facebook, Instagram and Twitter YotaCovers that poll your social networks as often as every 15 minutes and display the latest post. Currently, it's only the one post, but Yota is planning to expand them to include more of your feed. They are also interactive, so you can like and retweet content without having to enter the apps on the AMOLED side. That's indicative of what this software update is all about: giving users more information and more flexibility to do things with the E Ink display that they'd otherwise have to unlock the phone and load up an app for.

Other new YotaCovers include YotaRemote, a smart TV remote that works over WiFi and is compatible with the majority of recent Samsung and LG TVs from the get-go, and YotaFit, which is a basic pedometer app (though I'm told two high-profile partners are working to integrate data from their own fitness apps into this Cover). There are plenty of new widgets that slot into the YotaPanel grid layouts, too, most notable of which is the new Gmail widget that was apparently one of the most requested features. You've also got YotaSports (powered by EuroSport), which pulls live match scores and other sporty information (primarily for soccer lovers), and the simple to-do list and note-taking app YotaNotes, which can sync with Google Drive.

"Yotagram," a special version of the Telegram app built with an E Ink widget in mind, and subscription e-book service Bookmate, which has a native mirror-mode when its Android app is pushed to the E Ink side, round out the notable new additions. Not everything is working quite as intended yet, I must add. On the handset I've been playing with, the Facebook YotaCover isn't functioning properly, and the YotaNotes widget won't populate with lists I've made in the corresponding Android app. 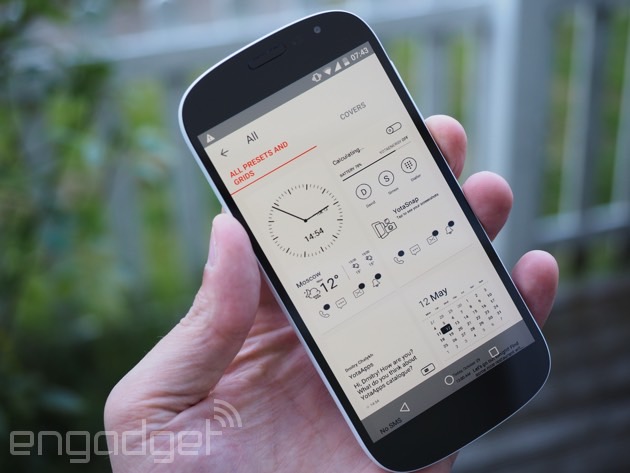 Making a comeback from the first-generation YotaPhone is "emotional messaging." What this feature does is scan the contents of SMS messages, pick out keywords and display an appropriate image alongside the notification on the E Ink side. It's sometimes wildly inaccurate and only works well with short messages, but that's supposed to be part of the fun. The YotaEnergy low-battery notification has also been tweaked so it's persistent, hard to ignore and gives you more information on how long your phone's got left with or without battery-saving mode enabled.

Yota hopes that by adding more functionality to the E Ink display, consumers will see more value in the quirky and niche device. The company doesn't want to do all the work itself, though, and has launched a new SDK it says is simpler than the last and encourages developers to build widgets that allow for quick interactions on the E Ink side, without needing to overhaul the way their apps work.

The final slice of news today is the launch of the YotaPhone Wireless Power Bank accessory, which is essentially a reskinned, white-label portable charger with built-in Qi wireless charging plate. The Power Bank is on sale now for £35 in the UK and €49 in the rest of Europe.

In this article: hands-on, mobilepostcross, yota, yotadevices, yotaphone, yotaphone2
All products recommended by Engadget are selected by our editorial team, independent of our parent company. Some of our stories include affiliate links. If you buy something through one of these links, we may earn an affiliate commission.