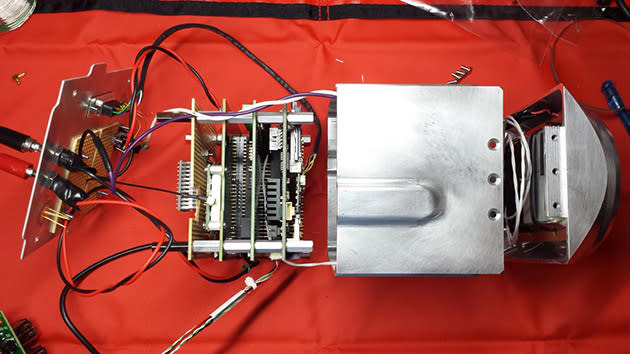 Most CubeSats sent out to space by scientists and students end up orbiting the Earth -- that's pretty much their final destination. NASA, however, wants to use the diminutive satellites for missions that'll take them way beyond low-Earth orbit and right into another planet's atmosphere. Goddard technologist Jaime Esper is developing a concept called CubeSat Application for Planetary Entry Missions (CAPE) that's comprised of two modules and weighs around 11 pounds. One of the CubeSats will serve as the service module in charge of propelling the spacecraft to its destination, and the other will serve as an entry probe.

After the spacecraft gets ejected from its "mothership," it'll either spread its solar panels or run on batteries until it arrives near its assigned planet. The service module will then detach from the entry probe, which was designed to withstand the harsh conditions of entering a planet's atmosphere. Esper plans to load that probe with a ton of sensors, so it can collect data (such as the temperature, atmospheric pressure, and so on) and beam it back to the mothership, which will transmit it to the ground station on Earth. Since CubeSats are relatively inexpensive, future missions might deploy several CAPEs to monitor the different aspects of a planet.

Before any of that happens, though, Esper first has to prove the concept works. His team is dropping a prototype comprised only of the entry module from a high-altitude balloon this summer, and they're expecting it to hurtle towards the Earth at roughly the speed of sound. They're most likely doing their best to ensure a successful test flight, since they're hoping it will "attract potential partners to provide the rest of the vehicle" -- the service module, in other words. If all goes according to plan, Esper wants to go higher and drop another entry module straight from the ISS as soon as 2016.

In this article: cubesat, nasa, space
All products recommended by Engadget are selected by our editorial team, independent of our parent company. Some of our stories include affiliate links. If you buy something through one of these links, we may earn an affiliate commission.