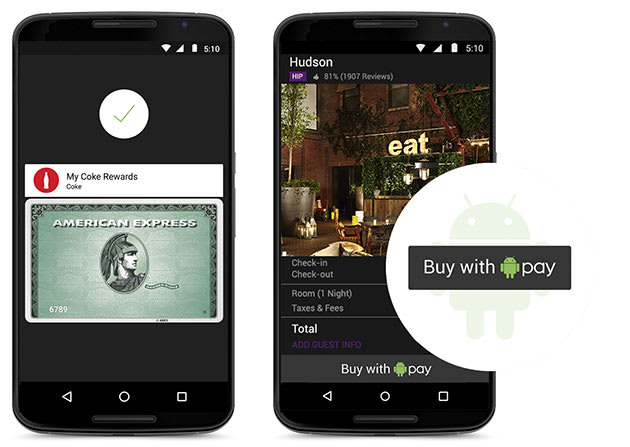 Google SVP Sundar Pichai may have tipped the company's hand on mobile payments back in Barcelona, but he offered little detail on how the system would work. At I/O 2015, though, the folks in Mountain View served up a wealth of details on the matter, including the announcement that Android Pay would be part of the Android M release. Just like Apple Pay, transactions are sorted via NFC and your actual card number isn't shared with merchants. Instead, it'll use "a virtual account number" to handle payments. When it arrives, the system will be employed by over 700,000 retailers (sounds familiar) like Macy's, Whole Foods, Walgreen's and many more. It'll also be used for in-app purchases, so if you're ordering food from Chipotle or paying for an Uber ride, you'll be able to use Android Pay there as well. And yes, web sellers can leverage the system, too.

In terms of security, the payment tech will employ your phone's fingerprint scanner -- if it has one -- to pay for items from a linked MasterCard, Visa, AmEx or Discover card. What's more, Google says it's still working on expanding the list of banks that support Android Pay and with AT&T, T-Mobile and Verizon to make sure that when you buy a new device, it'll be ready to work with the system out of the box. There's no mention of what'll happen to Google Wallet just yet, but reports surfaced yesterday that it would handle sending money between individuals as the folks in Mountain View completely overhaul Android phone-driven payments. That same report mentioned loyalty programs being lumped into Android Pay, but there hasn't been any talk of that yet either.

Source: Official Android Blog
In this article: android, androidpay, google, googleio2015, io, mobilepostcross, pay, payments, smartphonepayments
All products recommended by Engadget are selected by our editorial team, independent of our parent company. Some of our stories include affiliate links. If you buy something through one of these links, we may earn an affiliate commission.