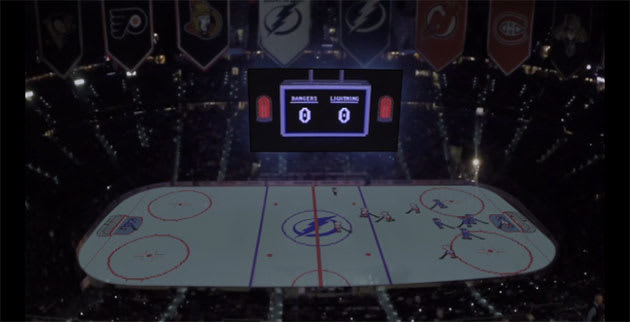 We've seen 3D projections on basketball courts and arena floors before, but the NHL's Tampa Bay Lightning just took the game up a notch. Before the team's Eastern Conference Finals game on Tuesday, it used the playing surface to project a "Bolts of Steel" (get it, lightning bolts) game simulation inspired by the Nintendo classic Blades of Steel. We surmise they opted for another name not just for copyright purposes, but because the franchise didn't exist until 1992. While the video you'll see after the break is a render/demo, a Deadspin reader caught the thing on tape during the pregame festivities, so you can have a look at was it was like for those in attendance. Perhaps if the Bolts advance to the Stanley Cup Finals, they'll let a couple of fans duke it out for some nachos.

Via: SB Nation
Source: Tampa Bay Ligthning
Coverage: Deadspin
In this article: 3dprojection, bladesofsteel, boltsofsteel, game, gaming, hockey, nes, nhl, nintendo, projection, sports, tampabaylightning
All products recommended by Engadget are selected by our editorial team, independent of our parent company. Some of our stories include affiliate links. If you buy something through one of these links, we may earn an affiliate commission.