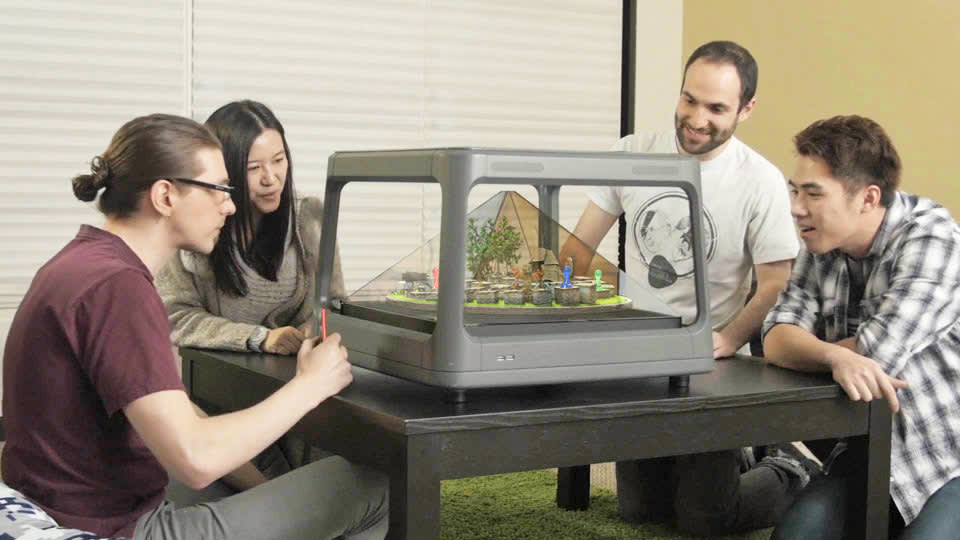 If you've ever thought that the apps and videos on your phone were flat and lifeless, H+ might have an answer. It's crowdfunding the Holus, a tabletop display that turns 2D content from phones and PCs into 3D holograms that you can see from any direction. All you do is plug in -- after that, you can play virtual board games, educational titles and any other app with support for the extra immersion. There's even motion tracking that will make sure content follows you when you wander around. H+ hopes that Holus will revive the lost art of real-life get-togethers without making you revert to that Monopoly game gathering dust in your closet. That's a bit optimistic (as are the impossibly high-quality promo shots), but it's hard to deny the allure of a living room holographic display that you don't have to wear.

It won't surprise you to learn that Holus will be pricey. You'll have to pledge $550 as an early backer to get one ($650 for a Holus Pro with HDMI video input), and it's more likely that you'll be spending $850 to $950 for the privilege. As it stands, the first units aren't expected to ship until March, so you'll have to be patient. If the hardware lives up to the hype, though, it could be worth the investment for technology that was sci-fi just a few decades ago.

Update: You know how we said the promo shots looked too good to be true? That might well be the case. Raphaël de Courville notes that Holus is likely using the ages-old "Pepper's Ghost" technique to create hologram-like 2D images, similar to the recreations of dead musicians that you've seen at some concerts. If that's what's involved here, you won't get true depth or 360-degree viewing. That doesn't mean it won't be interesting -- just be sure to temper your expectations before you plunk down any cash.

Source: Kickstarter
In this article: av, crowdfunding, design, display, gear, hologram, holographic, holus, hplus, kickstarter, mobilepostcross, timeline16holodisplay
All products recommended by Engadget are selected by our editorial team, independent of our parent company. Some of our stories include affiliate links. If you buy something through one of these links, we may earn an affiliate commission.