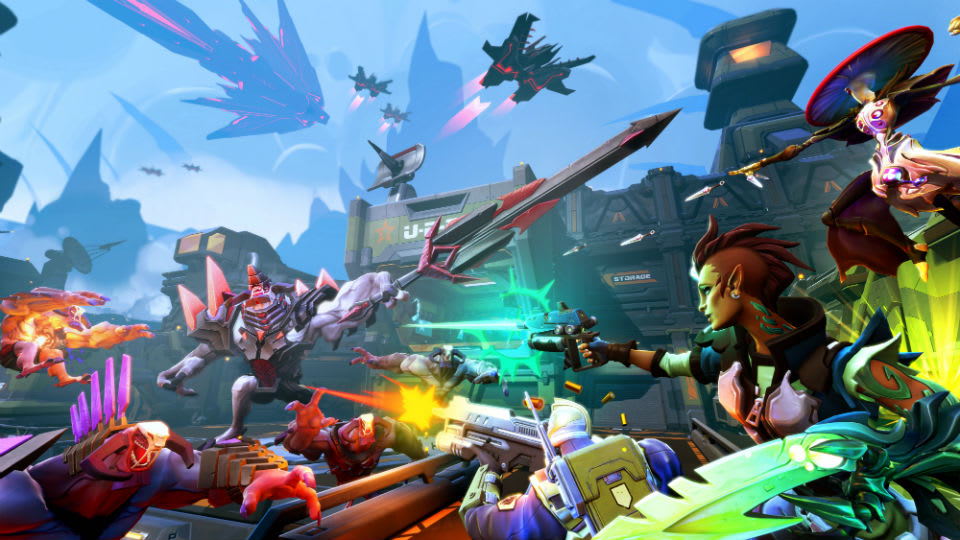 Battleborn looked like it would be my kryptonite. When Gearbox Software showed the game to a group of reporters at a pre-E3 event, the roster of 25 characters looked like League of Legends clones, all of them clashing like a teenage anime enthusiast's backup Tumblr. That the studio emphasized a 5-vs.-5 competitive mode, where players would hit and shoot each other in online matches, only further entrenched its cosmetic similarity to that game. What's more, Gearbox promised that playing Battleborn would be all about the "ding" moment, when you level up your character in each match; again just like League of Legends. All those signifiers on top of a name that made it sound like an off-brand He-Man playset, and Battleborn came off like everything I detest about modern gaming. Then I played a co-operative story mission with four other people and never wanted to stop. 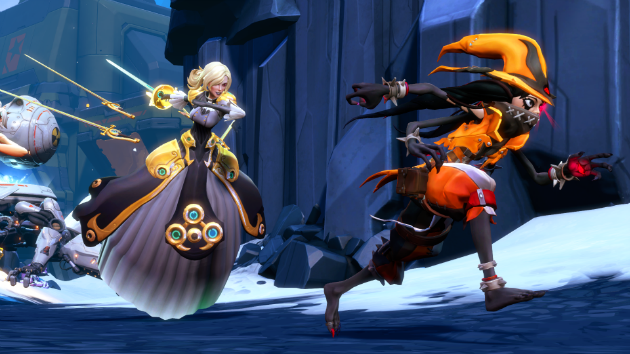 Orendi and Phoebe are two heroes with more character than you'd expect.

Don't let the bad name and eSports marketing fool you: Battleborn is a delicious mix of old-school arcade spirit and Gearbox's beloved Borderlands role-playing games. Battleborn utilizes the same mix of light cartoon art, snide humor and characters with complementary skill sets that invite players to experiment with how they destroy hordes of enemies in tight, tiered spaces. Unlike Borderlands, though, its challenges are compact. There are no huge worlds to explore, wandering from town to town and you don't spend dozens of hours building your character up. In the campaign, which you can play by yourself or with up to four other people cooperating, you goals are refreshingly set and simple; it feels far more like a classic arcade game like Final Fight than it does League of Legends.

Battleborn feels far more like a classic arcade game like Final Fight than it does League of Legends.

Gearbox acknowledges that inspiration up front. The demo we got to play was just one section of a larger mission, where our crew had to fight against a bunch of angular monsters called Varelsi. (Those beasts work for some jerk vampire named Rendain, who's trying to control the last planet in a dying universe. You and your pals are trying to do the same.) Our goal was to fight through an alien canyon, activate a beefy robotic tank and escort it to a giant set of doors so it could blow them up and the good guys could plumb farther into Varelsi territory. Before all that, though, we got to pick our characters from a colorful grid of portraits that looked, as Gearbox noted, like it was lifted straight out of Street Fighter. The simplicity of this setup was extremely welcome and its vivid, exaggerated characters were charmingly approachable rather than cloyingly trendy as they first seemed. Compared to other games at E3 this year, there's a refreshing clarity in Battleborn when you play it that's weirdly absent in its marketing. 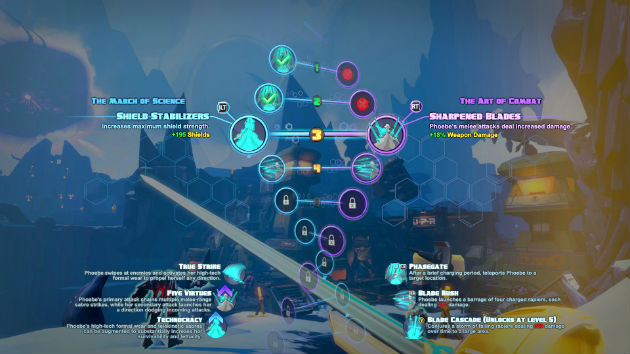 Building your character in each mission is nice and simple in practice.

Only 10 characters were available in the demo and I tried three of them, each one providing a unique approach to the find-and-protect-the-'bot scenario. Miko is a giant, sentient mushroom carrying throwing knives and who can toss out smaller fungi to heal companions or hurt enemies. Orendi, a four-armed demon in a witch's hat and with a jack o'lantern grin, casts big, violent spells and shoots balls of purple fire from her hands. Rath is an iron-haired swordsman who looks like he's on loan from Samurai Jack. He carries a big red sword and unlocks special moves that let him twirl around like a particularly sharp tornado.

The first thing that impressed me was how much character Gearbox has instilled in these weirdos even though you don't see them on screen. Battleborn is played in a first-person perspective, but your field of view is full of each hero's details. Orendi cackles and shouts nasty quips while her four spiky hands flit about the corners of the screen. A cloud of spores drift around you as Miko. Phoebe, another character I didn't get to try, uses four rapiers simultaneously, and the way they're angled on screen while you're playing tells you everything about her; she's poised and balanced with a flair to her sci-fi fencing skills. Vibrant personality is one of Borderlands' biggest strengths. It's striking how swiftly Gearbox affects that level of soul in Battleborn in so short a period of time. 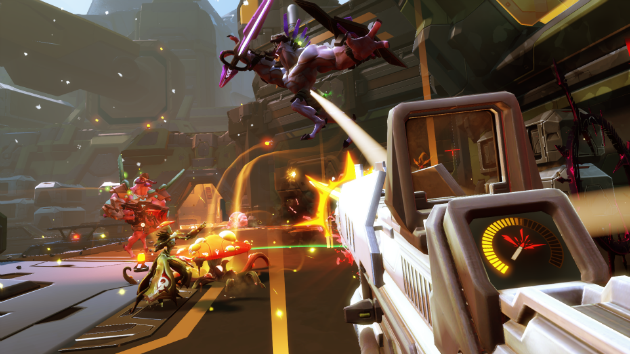 Gearbox has a knack for making games that feel like more than just another shooter.

The second thing I noted was how natural it makes an outwardly complex style of play. The idea that you have to build your character up from Level 1 to Level 10 in each mission, unlocking new skills and improving old ones as you dispatch enemies, sounds needlessly complex in the abstract. In execution, it gives Battleborn a wonderful thrust. It took about 20 minutes to play through the demo area, just enough time to fully build up each character. Each time they leveled up, a notice would flash on screen and you could pause to select from one of two upgrades. For example, do I want Rath's sword to be stronger or do I want to be able to use his special moves faster? It adds just the right level of complexity to the rush while keeping the action propulsive, essential when you're playing with a group.

It's striking how swiftly Gearbox affects that level of soul in Battleborn in so short a period of time.

Each time through felt fresh thanks to the differences in the characters. While Orendi felt vulnerable and needed to keep a distance from the action, you could wade into the thick of a fight with Rath and just slice away. And although the stages themselves were just corridors leading to slightly more open areas, navigating them always changed depending on whom you were using. Some characters can jump twice, leading you to previously inaccessible platforms and hallways where you could snipe enemies from far away. It has everything old arcade action games needed to thrive; instantly satisfying action with multiple ways to approach and replay it. 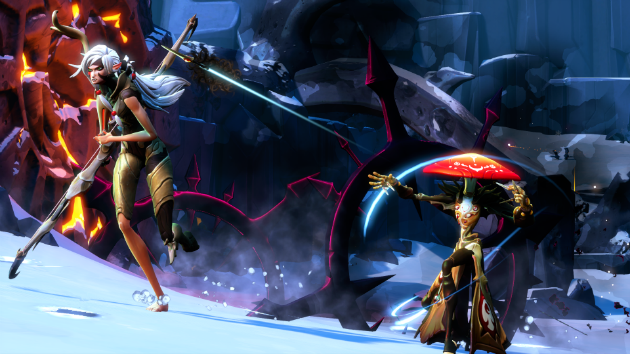 While I never had a chance to try out Battleborn's competitive options, I walked away more than impressed by just this fun-size piece of its campaign. Gearbox is making something with real potential that stands to broaden its success beyond the Borderlands games. If the generic name and oppressive trendiness of the messaging surrounding Battleborn have made this seem like a late-2015 game to dismiss, ignore that impulse. This is one to watch.

In this article: battleborn, borderlands, e3, e32015, gearbox, hands-on, hdpostcross, microsoft, sony
All products recommended by Engadget are selected by our editorial team, independent of our parent company. Some of our stories include affiliate links. If you buy something through one of these links, we may earn an affiliate commission.