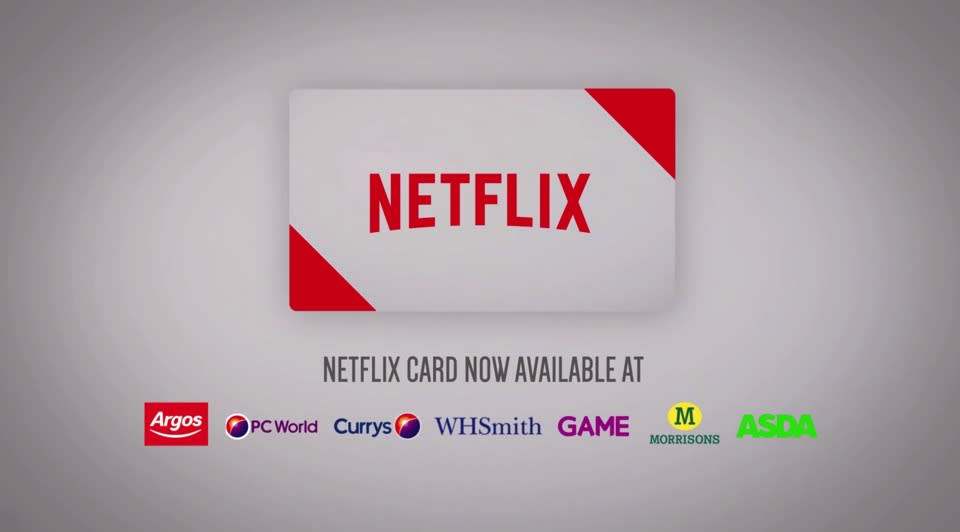 In the UK, if you want to sign up for Netflix, your options are basically PayPal or your bank card. With the Netflix Card, however, the company has just introduced a new pay-as-you-go option, allowing you to continue sampling the service beyond the free trial or enjoy your favourite films and TV shows without the added hassle.

Similar to gift cards for Amazon, Google Play or iTunes, Netflix's Card offers £15, £25 and £50 credit, which can be redeemed via a unique code on the back. It can be used against any one of Netflix's three streaming tiers, which include an SD option, HD service and a 4K plan (think House of Cards in Ultra HD). If you're familiar with Netflix's pricing structure, you'll know that its monthly plans won't always fit nicely into the values on each card. If you have a little bit of credit left over, it'll run for a number of days dependent on your balance.

If you're currently signed up to a monthly plan but feel Netflix's latest option would better suit you, the Netflix Card can be used on new and existing accounts. Many of the retailers you'd expect are also on board, with Argos, Currys, PC World, WH Smith, GAME, Morrison's and Asda already selling the Card. More newsagents and supermarkets are expected to follow suit over the coming months -- because you've always wanted to give the gift of Netflix.

In this article: hdpostcross, netflix, netflix card, streaming, top-up, uk-feature
All products recommended by Engadget are selected by our editorial team, independent of our parent company. Some of our stories include affiliate links. If you buy something through one of these links, we may earn an affiliate commission.