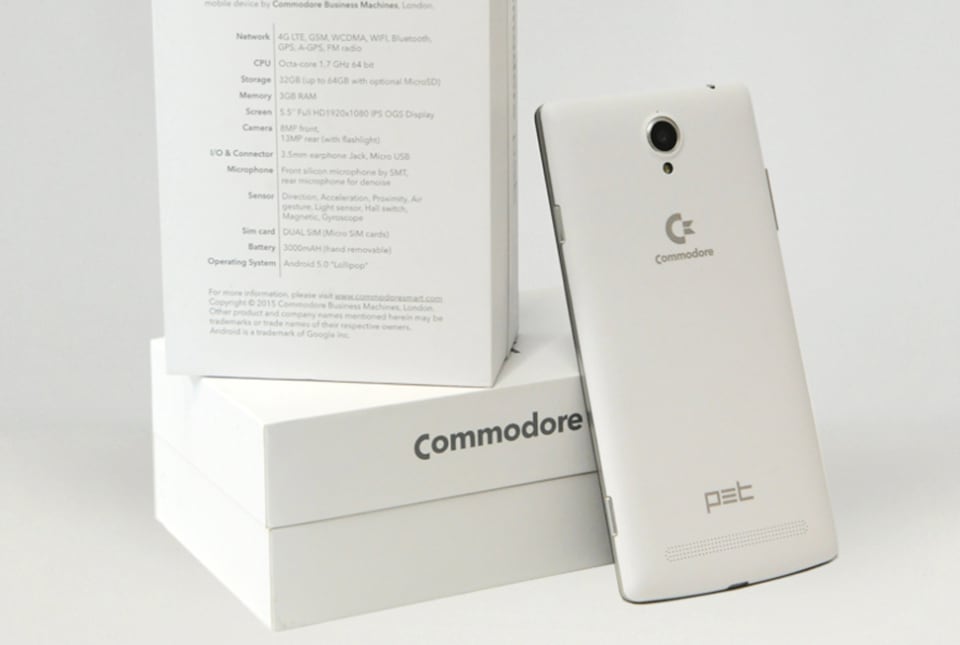 It hasn't been a legitimate name in computing for over 20 years, but somehow the Commodore brand always manages to find a way back into our lives. In 2004, it came back as a simple TV-Game joystick. In 2011, Commodore USA sold gaming PCs stuffed into retro-styled keyboard chassis. Today, the brand is back again--as a nostalgia-stamped 5.5-inch Android smartphone.

Putting its super-obvious nostalgia-grab aside, the Commodore PET (yes, named after that computer) actually sounds like a pretty decent midrange phone--complete with a 1.7GHz octa-core Mediatek processor, a 13-megapixel rear facing camera with a dedicated shutter button and a hefty, 3000 mAh battery. Nothing too special, but there are a few features baked in for fans of the brand, namely a pair of customized emulators for the Commodore 64 and Amiga games.

The phone will be available in Italy, France, Poland and Germany later this month to the tune of about $300, which buys 16GB of storage with an included 32GB micro SD card, and a 32GB version will sell for about $60 more. Live on the wrong side of the world and need a new Commodore in your life? Don't worry--the company says it plans to expand to international markets soon.

Update: Of course, there's another way to get it if you don't mind missing out on some of that Commodore re-branding: direct from China. Android Police did a little legwork and found (surprise!) the Commodore Pet is a Orgtec WaPhone with a new logo. The original version of the phone doesn't come with Commodore and Amiga emulators, but it does cost about half as much, minus international shipping.

Source: Android Police
In this article: amiga, android, Commodore, commodore64, commodorepet, mobilepostcross, smartphones
All products recommended by Engadget are selected by our editorial team, independent of our parent company. Some of our stories include affiliate links. If you buy something through one of these links, we may earn an affiliate commission.