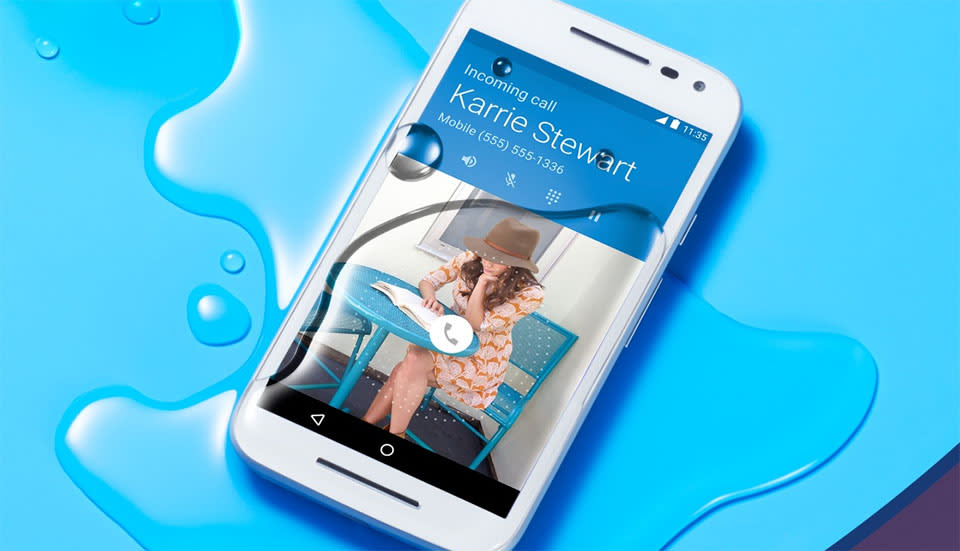 Motorola has just revealed its third-generation Moto G in the US, and its best-selling device now has a waterproof shell and Moto Maker customization. As rumored, it's mostly similar to the last model, spec-wise, but has gotten a little better across the board for about the same price. The $180 device packs a 5-inch, 720p screen, 1GB RAM and 8GB of internal memory, as before. But it now has a quad-core Snapdragon 410 chip, 2GB RAM option and Android 5.1.1 Lollipop "with zero bloat" out of the box, according to Motorola. And the Moto G now has a 13-megapixel Nexus 6 camera module, which should make for considerably better photos than the previous 8-megapixel unit.

Other specs include 4G LTE (something that took a while to get to previous models), a 20 percent beefier 2,470mAh battery and upgradeable microSD memory. Perhaps the best news of all is for lovers of Moto Maker. As rumored, the Moto G now has the customization feature made famous by the Moto X, meaning if you don't like the stock black or white colors, you can select from a variety of shells in orange, green, pink and other hues. It's also IPX7 certified for water and dust resistance. The new handset goes on sale today around the world for $180 in the US and £160 in the UK with 8GB of memory and 1GB RAM. The Moto Maker option bumps that to $220 and £180, respectively.

Source: Motorola
Coverage: India Today
In this article: launch, lenovo, mobilepostcross, Moto G, Motorola
All products recommended by Engadget are selected by our editorial team, independent of our parent company. Some of our stories include affiliate links. If you buy something through one of these links, we may earn an affiliate commission.