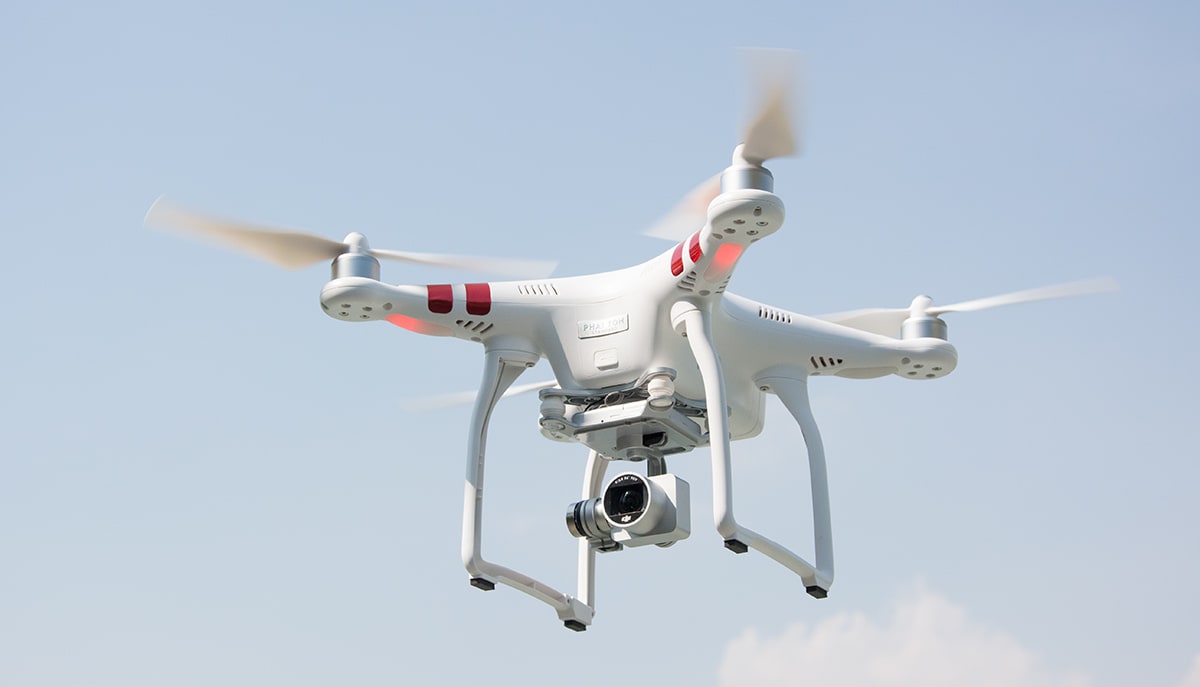 After the Phantom 3 Professional and the Phantom 3 Advanced, DJI's back with an even cheaper drone dubbed Phantom 3 Standard to tempt beginners. It costs just $799, which is $200 less than the Advanced and $460 less than the Professional, but you still get all the essentials: a built-in 3-axis stabilization gimbal, 12-megapixel still image capture (supports RAW shooting), up to 2.7K of video capture at 30 fps and 40 Mbps, video downlink at up to 720p and a slightly longer flight time of up to 25 minutes. The only real downside here is that the Standard can only transmit video back to your phone at up to 1km or 0.62 miles, which is half as much as the other two models. Other less important differences include the missing visual and ultrasonic sensors on the Standard's underbelly, which are only to help the drone identify its position accurately (the more high-end Inspire 1 has this, too); and the bundled remote controller is basically just an updated version of the one that came with the Phantom 2 Vision+: no still camera trigger and no tablet holder, but you still have an integrated WiFi range extender plus a wheel to adjust the camera's tilt. It's worth noting that while the Advanced can only capture video of up to 1080p (for now) instead of 2.7K, it still beats the Standard with a better camera sensor from Sony. The Professional has the same Sony sensor as well. 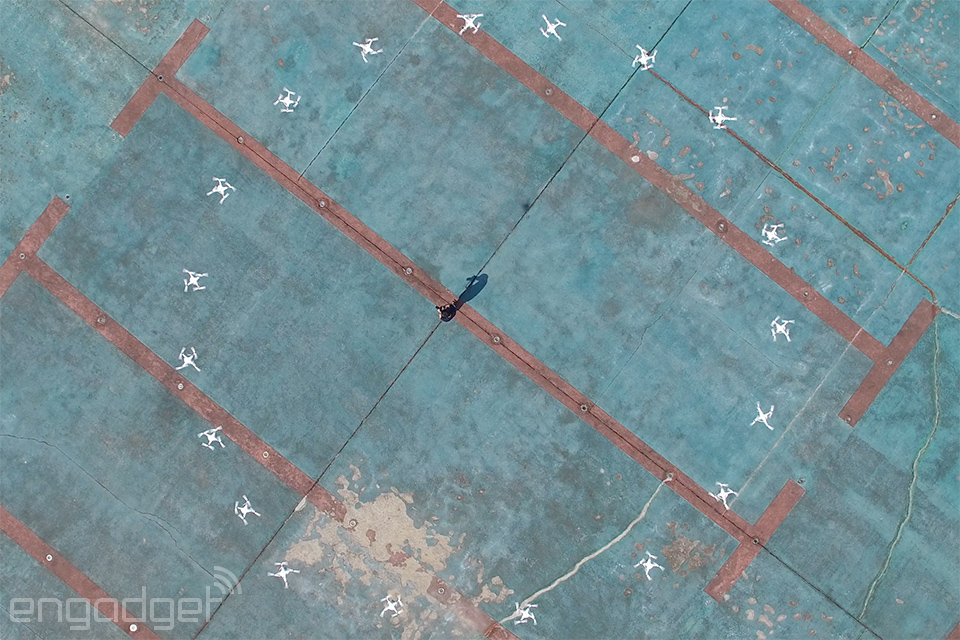 An action sequence shot of the Phantom 3 Standard flying automatically in Point Of Interest mode.

One major complaint we had in our Phantom 3 Professional review was the lack of autopilot features. Well, these are arriving in the near future, with the Standard likely to be the first in the Phantom 3 series to receive the firmware update. Our favorite feature is the Point Of Interest mode, which keeps the drone's camera pointing at your desired object -- as configured in the app -- while it flies around in a circle at your set radius, speed and height. (In fact, professional drone pilots may have already come across this feature on DJI's A2 flight controller.) The result is a stable 360-degree shot that makes anyone in the middle of it look cool, especially while you're hiking up a hill or driving across the field.

Another upcoming intelligent feature that we got to see is the Ground Station mode. To set a route, simply fly your drone to a set point with your desired camera angle, then save the waypoint, and repeat until you're done. You can then let the drone automatically follow the course to make a slick video, with the gimbal taking care of smoothing out your shot throughout the entire route, rather than changing the camera's angle on the spot at each waypoint. And say if you need to take another shot, simply pull down the remote controller's right trigger to fly the drone backwards on the same course. It's a pretty handy feature for both beginners and film makers, really.

The third and perhaps the riskiest feature here is the Follow Me mode. We say risky, because if it's not used properly, then there's always a chance that your drone could end up hitting a building or a tree. That's the last thing DJI wants to see in the news, but apparently it's also what a lot of customers want, so it's working on this. Alas, we didn't get to try it during our preview, so we'll have to wait and see. 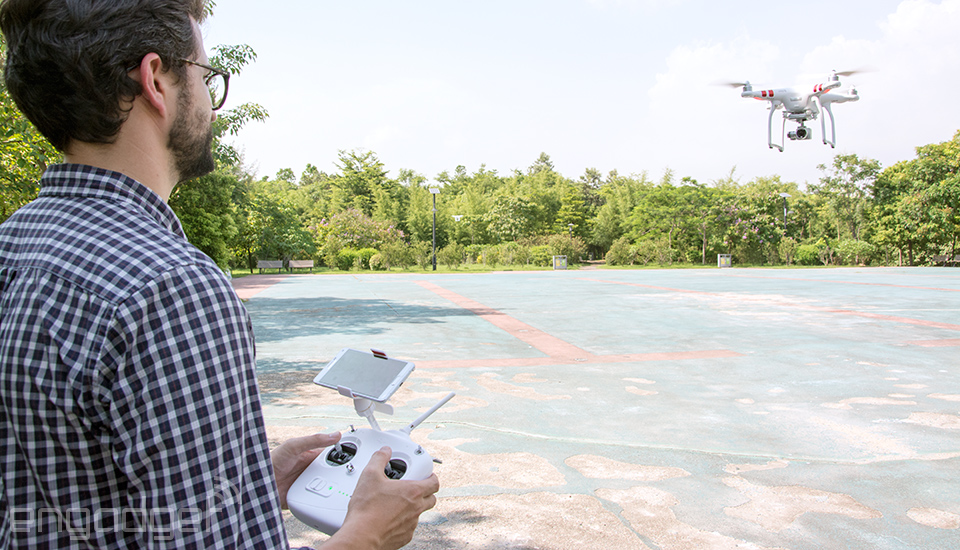 Like the Phantom 2 Vision+, the Phantom 3 Standard's remote controller has an integrated WiFi range extender.

In addition to the aforementioned intelligent features, the Phantom 3 Standard offers a few tools that make life easier for beginners. For those who struggle to get their heads around the drone's orientation when it's far away, they can toggle Course Lock that changes the drone's direction according to the pilot's perspective, instead of the drone's perspective. In other words, even if the drone is facing you, it'll go left in your view if you pull left on the remote controller, rather than fly right as it normally would. Of course, you'll want to refrain from using the live view while flying with Course Lock enabled, in order to avoid confusion.

The second notable mention goes to Home Lock. When toggled, you can pull the drone back to where it took off by simply pulling back the right stick, regardless of where the drone is. It's like letting the drone take a shortcut back to you, but obviously, you should be wary of any object that could be in the way.

Other noob-friendly features are actually already on the Professional and Advanced. These include a geofence tool that lets you set a virtual barrier at a set distance, as well as mandatory GPS calibration on the drone before first take-off, and auto take-off plus auto landing which can easily impress your friends. 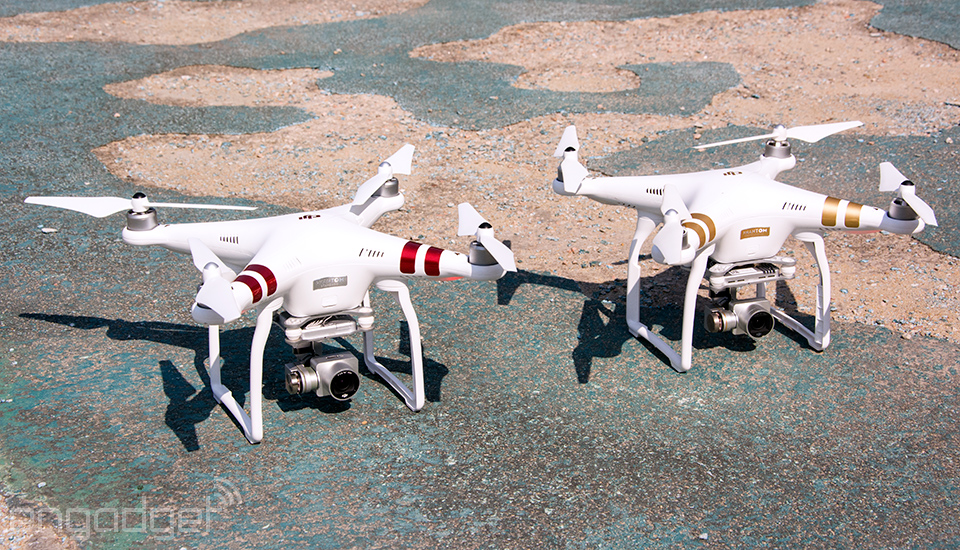 A Phantom 3 Standard next to a Phantom 3 Professional.

At $799, the Phantom 3 Standard will likely be a popular choice for folks who are new to aerial videography. For those who are interested, you can grab one on DJI's official online store, and expect shipment as early as next week.

Source: DJI, YouTube
In this article: aerialcamera, AerialPhotography, AerialVideo, dji, drone, hands-on, phantom 3, phantom 3 standard, video
All products recommended by Engadget are selected by our editorial team, independent of our parent company. Some of our stories include affiliate links. If you buy something through one of these links, we may earn an affiliate commission.