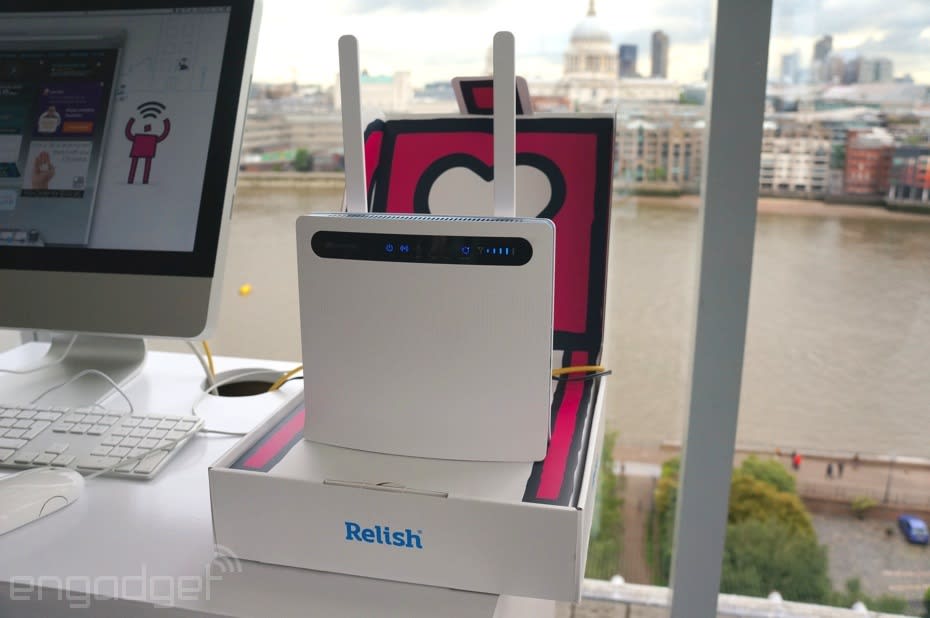 Relish's dream to connect London homes with wireless broadband, rather than traditional landlines, could be in trouble. UK Broadband, the company behind the service, has reported losses of £37.5 million for 2014 -- almost four times what it was the year before. To make matters worse, turnover slipped from roughly £2 million to £1.5 million over the same period. Relish was launched in June 2014 as a simpler, but capable broadband alternative to the likes of BT, Sky and Virgin Media. Instead of copper and fibre cables, the company relies on 4G connections to deliver the internet to its customers. The advantages are plentiful -- you don't need to pay for a landline, and because Relish's network is already up and running, you don't need an engineer to install anything. Once you've signed up, a router is sent round within the next working day and you can instantly get online. The concept is similar to the mobile broadband packages offered by EE, Three and other UK carriers, although here there are no restrictive data allowances. So what's gone wrong?

Well, it should be noted that the figures filed by UK Broadband aren't just for Relish. The company also offers consultancy services and the "provision of wireless solutions," including design and the supplying of equipment, for instance. Even so, it's evident that Relish hasn't been a runaway success. At least, not in the six months following its launch, anyway. The company has been pushing its offering with ads on the Tube, but Relish still doesn't feel like a household name. There's also something of a stigma attached to wireless broadband at the moment. Adopters often tell stories of slow or unreliable connections, similar to those experienced on their phone. Relish promises "up to 50Mbps" speeds, but that's also dependent on you being inside their catchment area. The company is focused solely on London, but its network doesn't cover every household -- to find out if you're eligible, you'll need to submit your postcode into its coverage checker first.

Home broadband is still a messy quagmire in the UK, but traditional ISPs are pushing hard to improve speeds and coverage. Relish is an intriguing competitor, and could appeal to Londoners who move a lot and just want a decent, easy to cancel broadband package. Early demand appears to have been low though. Relish hasn't failed just yet -- business could have picked up in 2015 -- but this is a worrying sign from the company.

Via: ISPreview, The Telegraph
Source: Companies House
In this article: broadband, broadbanduk, relish, wirelessbroadband
All products recommended by Engadget are selected by our editorial team, independent of our parent company. Some of our stories include affiliate links. If you buy something through one of these links, we may earn an affiliate commission.