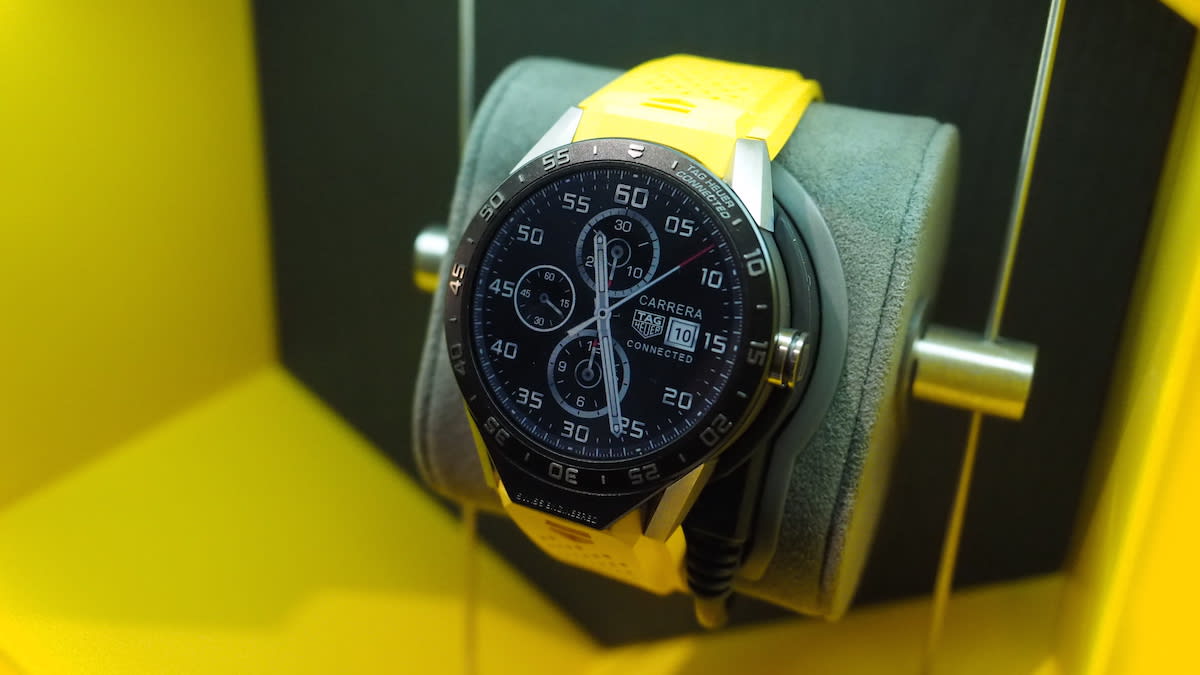 TAG Heuer unveiled its first smartwatch called Connected at an event today. The 155-year-old luxury watch company turned to its classic Carrera for inspiration. But for the innards of the watch, it tapped into Google for its Android Wear software and leaned on Intel for its sensors and processing. To make room for the computing capabilities, they went with a large sized watch -- 46.2mm across and 12.8mm thick -- that's currently available only for men. The watchmaker announced that a women's version is in the making, but for now the men's only watch is available at 20 stores across the country for $1,500.

When I first strapped the TAG Heuer Connected on to my wrist, what instantly set it apart is that it looks like a familiar, traditional watch. It has three watch faces: a chronograph, a traditional three-hand face and a GMT face option. While the watch is modeled after the Carrera from the '60s, it feels nothing like it. From a distance, it's reminiscent of the bulky but iconic craftsmanship of the original watch, but it's deceptively light. It has a titanium case, bezel and buckle with a vulcanized rubber strap that make the watch incredibly comfortable on the wrist.

A quick swipe over the watch face takes you to the apps, texting features and even Google maps. There's also a "draw emoji" option that would make the comparison to other smartwatches unavoidable. But, despite the apps and Google voice recognition built into this watch, it's hard to compare the conventional looking TAG Heuer Connected to other smartwatches. The company didn't set out to build a smartwatch. They wanted one of the their own watches to be smarter and more capable for watch-wearers who need their watches to do more than just tell time.​

In its effort to build a smartwatch, the company gave up the "Swiss made" status on its latest product. The guts of the watch are manufactured by Intel here in the US and even though about 70 percent of the watch is still built in Switzerland, the watch doesn't qualify for the status. Earlier at the event, Jean-Claude Biver, CEO of TAG Heuer, emphasized that the USP of the watch will be that it's "eternity in a box". So, when the current Connected model inevitably becomes outdated you can trade in your smartwatch for a traditional Carrera.

The transformation, which will reportedly cost an additional $1,500, is aimed at turning a trendy, tech-heavy watch into a traditional TAG that's meant to be passed down for generations. The watchmaker believes that gives their device an edge over other smartwatches that are prone to obsolescence. But without the option to upgrade, even the luxurious Connected seems to be a temporary smartwatch like all its counterparts.

Edgar Alvarez contributed to this report.
In this article: AndroidWear, AppleWatch, carrerawearable01, Intel, mobilepostcross, TagHeuer, TagHeuerCarrera, TagSmartwatch
All products recommended by Engadget are selected by our editorial team, independent of our parent company. Some of our stories include affiliate links. If you buy something through one of these links, we may earn an affiliate commission.