Apple's AirPods drop to $129 on Amazon

The best true wireless earbuds we listened to at CES 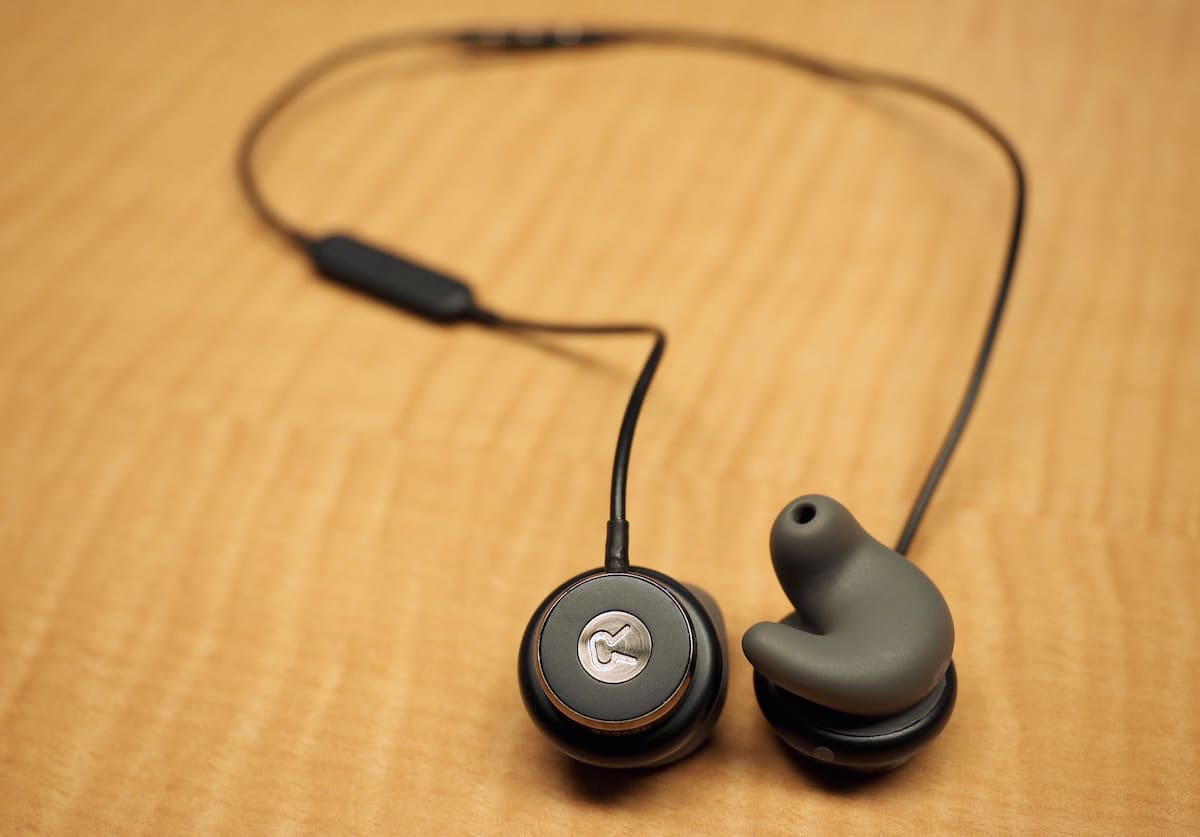 Earlier this week, we heard about the Revols, a pair of wireless earbuds that can be custom-fit to your ears in 60 seconds. In just a few short hours after it hit Kickstarter, Revols met and surpassed its $100,000 funding goal -- it's now earned a little over $326,000 in pledges. To learn what all the hype was about, I talked to the two co-founders and tried out a prototype version of the custom-fit earphones for myself. In sum? It works. In just under a minute, I had custom molded earbuds.

Navi Cohen, Revols' CTO and co-founder, first thought of the idea in college when he started getting into higher-end earphones. They sounded great, but they weren't very comfortable. "After awhile, my ears would get sore," he said. He then looked into getting custom-fit earphones, but it was too much of a process and much too expensive. Daniel Blumer, the company's CEO and co-founder, said he went for a custom-molded pair himself, and said it was an expensive and arduous process; they shoot a custom molding solution in your ears, ask you to stay still for several minutes with your mouth open, and then after that, the mold is shipped back to the company to hand-make those earbuds. "Unless you're an audiophile who's willing to spend thousands of dollars and wait a long time, those traditional injection molded earbuds aren't for you," Blumer said.

So, with Cohen's know-how in plastics and background in mechanical engineering, they developed the Revols, which approaches the whole custom-fit earphone thing in an entirely new and innovative way. When you first get a pair, you'll notice that the silicone buds are filled with a squishy molding gel. You're then instructed to download an app, which will guide you through the fitting process. Push the buds in according to the video tutorial and when you're ready, tap a button. The app then tells the earbuds to start hardening that gel so that it fits perfectly in your ears. When I asked Cohen on the technology involved here (how does the gel harden and mold to your ears like that?), he said it was a secret proprietary technology. Patent-pending, of course.

I tried this out for myself using a prototype model, and it felt weird but not unpleasant. There was warming sensation that filled my ear as the 60 seconds went by, which Cohen said was mostly to inform the user that the process was working. After it was done, I had a slightly hard time popping the buds out because they were already custom-molded to my ear. 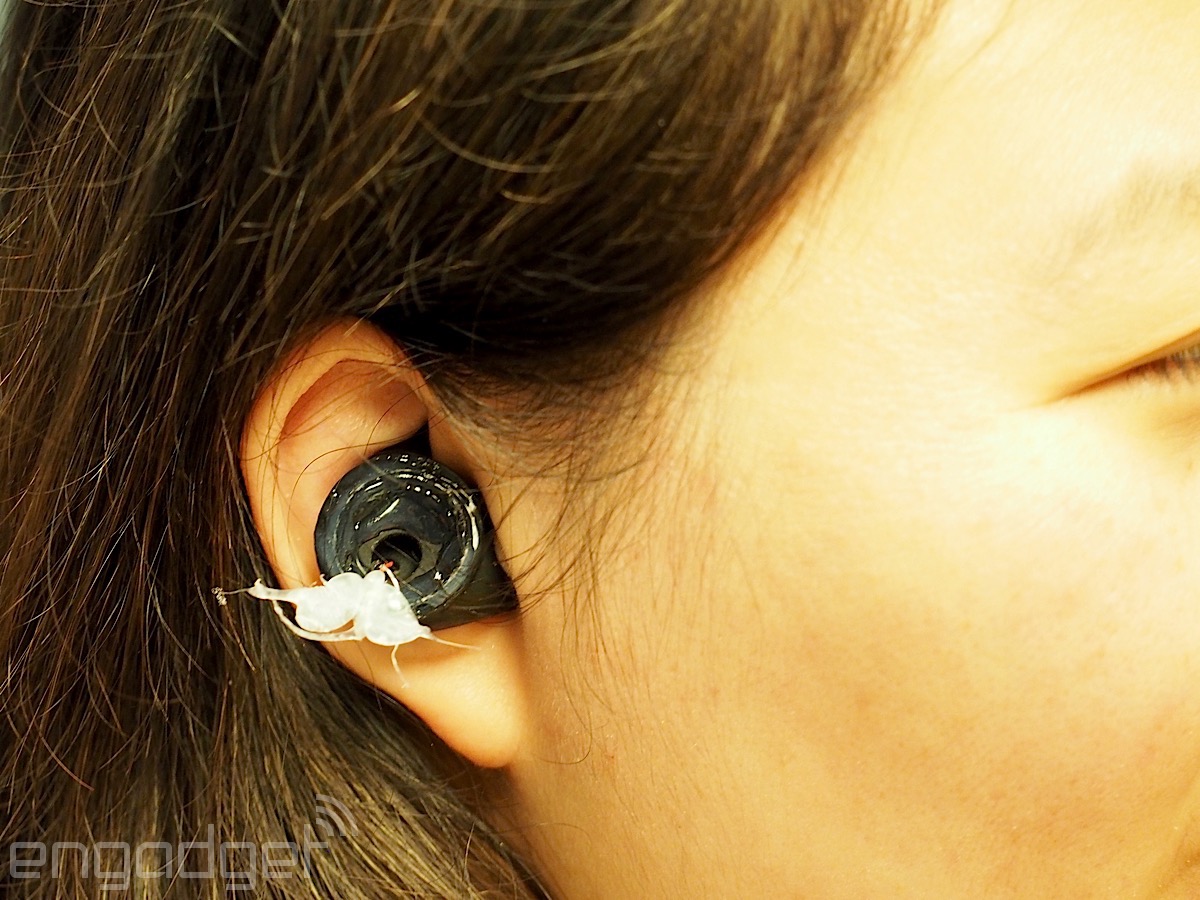 And, well, it worked. When comparing the custom earbud to the default earbud side-by-side, I could see that the custom version had crevices and edges that the original did not have. Additionally, as most people (including myself) have pairs of ears that are shaped slightly differently from each other, a custom fit makes more sense than traditional one-size-fits-all models. "It automatically forms to the unique shape of your ear," said Blumer. "Your ear is as unique as your fingerprint."

A few more details about the Revols: They work via Bluetooth and have a pretty good rated battery life of around eight hours. You can also clip on an external battery to the proprietary charging strip on the cord to extend that life another six hours. The battery is actually small and slender enough that you can still wear the earbuds with it attached. Blumer also tells me that they're working on a charging cable for the Revols that lets you listen to music while charging the earbuds, which is something that a lot of Bluetooth earphones can't do. There's also an inline microphone for taking calls.

As it's custom fitted to your ear, the Revols boasts passive noise isolation that'll block out external noise. But if you're jogging around town, you probably don't want that, so the Revols has another microphone that lets in environmental noise -- you use the app to control just how much of that you want to hear. Revols calls this an "adjustable soundscape." And if you like, you can also add on additional colorful sports sleeves to protect the earbuds against sweat. The ring around the earbud also rotates like a watch bezel, so you can wear the earbuds either over or under your ear. 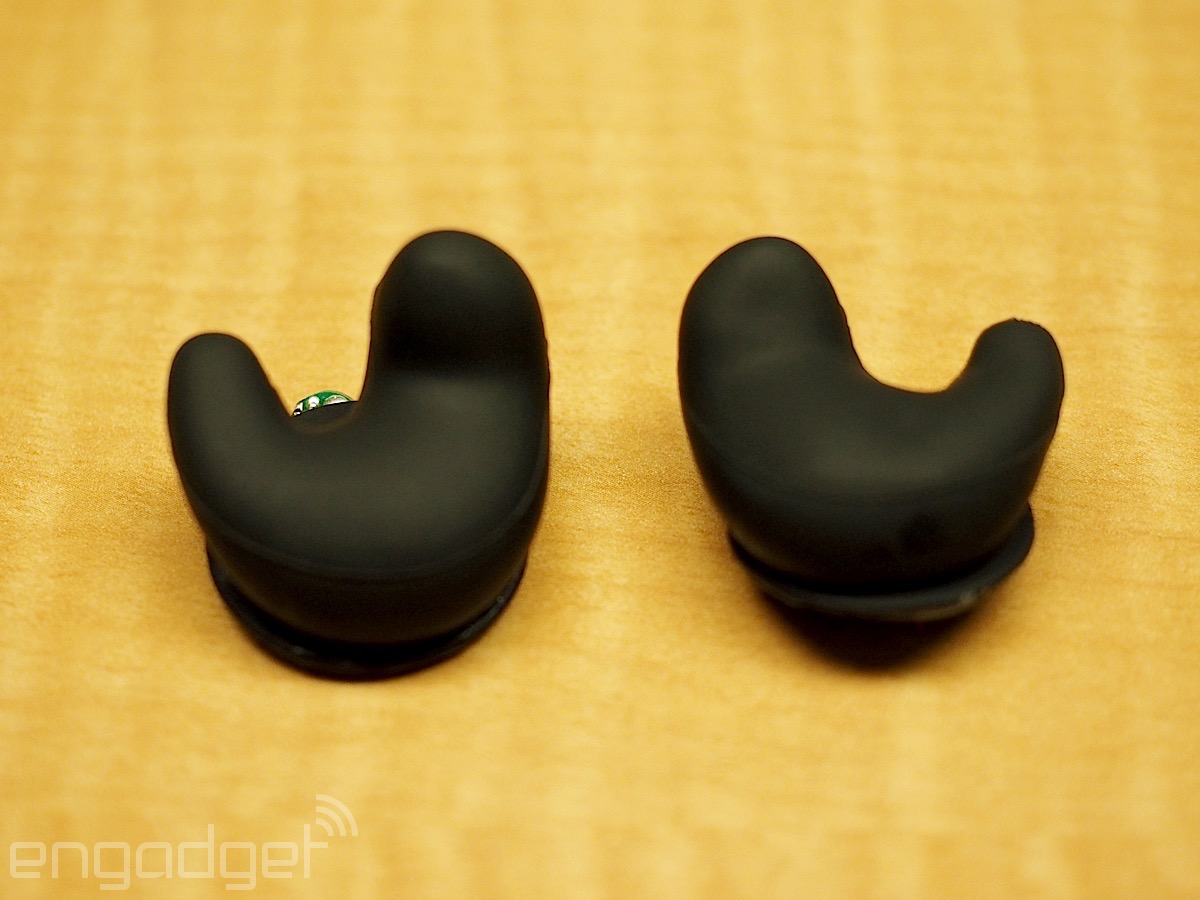 L to R: Out-of-the-box earbuds next to custom molded earbuds

Last but not least, is sound quality. Through a partnership with the HAX hardware accelerator program, Revols will be powered by Onkyo, a high-end audio firm in Japan. "We'll be working with their engineers to optimize the sound quality so that it is in fact a premium experience," said Blumer. This includes choosing the final speaker selection, the sound profile, the sound signature and the audio tuning.

Throughout the meeting, I could tell Blumer and Cohen were excited about their product. They had just spent several months in Shenzen, China developing the hardware and survived several personal trials. For one thing, their acceptance to the HAX program was at the last possible minute; they showed off their product in June at a local incubator in Montreal and were told to fly to Shenzen right away for the HAX program, which started in July. At the same time, Cohen was already scheduled to get married to his then-fiance in October. Needless to say, there was a lot of flying back and forth. "It all worked out great, we're married and happy, but coming through the other side... it was an amazing experience, but that initial conversation [with her]? It was rough," laughed Cohen.

Now, a pair of Revols aren't cheap: They'll retail for $300, though you can order one through Kickstarter for $200. But as Blumer and Cohen point out, they're still way cheaper than traditional injection molded earbuds, plus they can do way more. Still, we'll have to wait until June or July next year to see if they sound any good. If you have faith in it, you can go ahead and get one through their Kickstarter: there's about 58 days left in the campaign.

Ed. Note: Edited to add the earbuds' hardening properties is a proprietary technology

Source: Revols (Kickstarter)
In this article: earbuds, hax, revols
All products recommended by Engadget are selected by our editorial team, independent of our parent company. Some of our stories include affiliate links. If you buy something through one of these links, we may earn an affiliate commission.