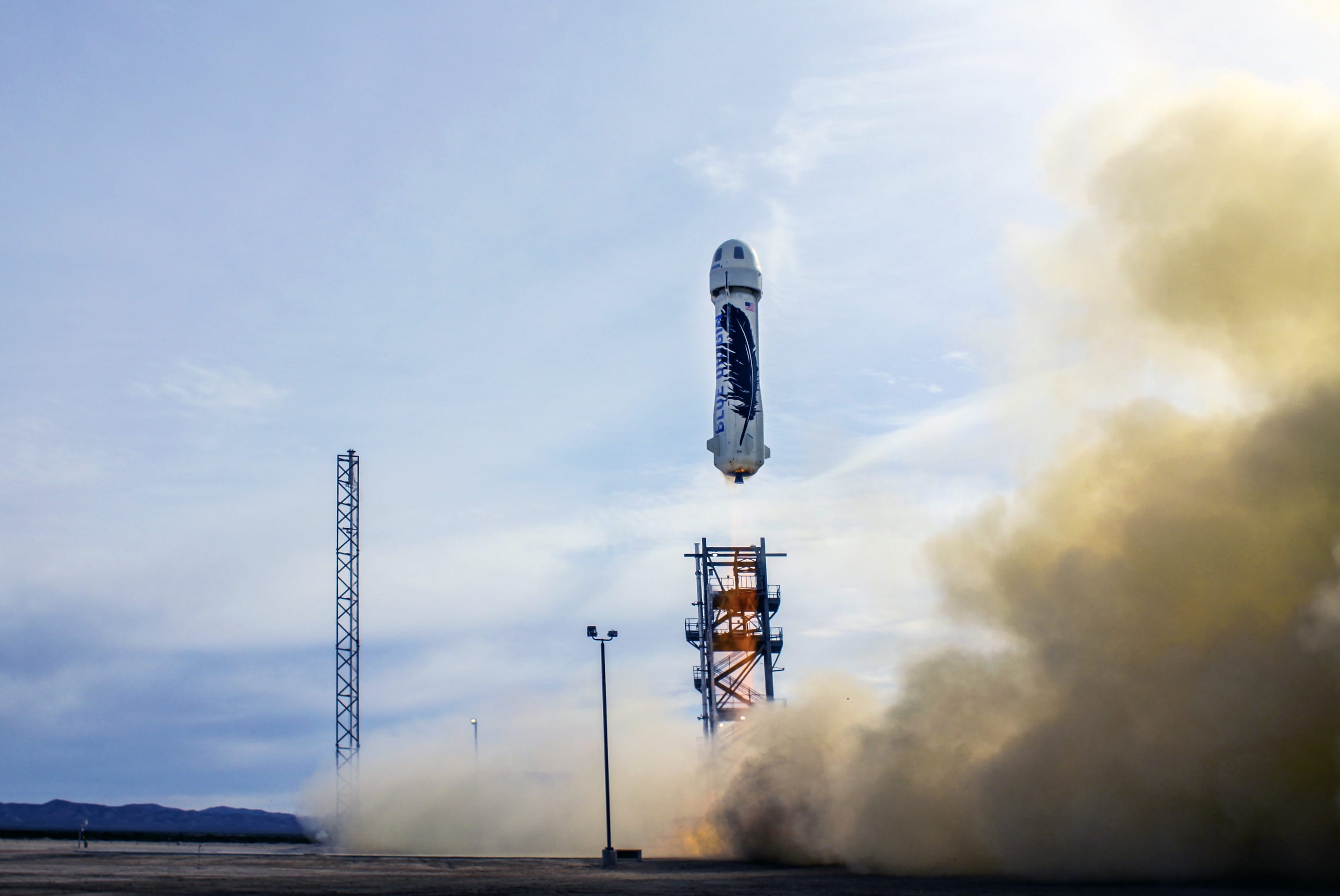 Blue Origin, the private space firm owned by Amazon's Jeff Bezos, has just dropped a huge gauntlet in the race to develop a reusable rocket. It just launched its New Shepard space vehicle (video, below), consisting of a BE-3 rocket and crew capsule, to the edge of space at a suborbital altitude of 100.5 kilometers (62 miles). The capsule then separated and touched down beneath a parachute, but more importantly, the BE-3 rocket also started its own descent. After the rockets fired at nearly 5,000 feet, it made a a controlled vertical landing at a gentle 4.4 mph.

So far, SpaceX has managed to get its own reusable booster close to its barge platform, but hasn't nailed the landing yet. Elon Musk's company does have a more daunting task, however -- its much larger Falcon 9 reusable first stage is propelling the rocket to an orbital, not suborbital altitude. While SpaceX's rocket separates at a similar height of around 50 miles, its speed at that point is much faster than that of New Shepard -- around Mach 10 compared to Mach 3.7. As a result, it continues to an apogee height of nearly 90 miles, so it has a lot further to fall. During its last attempt, the rocket unfortunately exploded early in the flight, setting the program back significantly.

The rarest of beasts - a used rocket. Controlled landing not easy, but done right, can look easy. Check out video: https://t.co/9OypFoxZk3

Bezos boasted that the BE-3 is "now safely tucked away at our launch site in West Texas, [and] is the rarest of beasts—a used rocket." He added that "it flew a flawless mission -- soaring to 329,839 feet and then returning through 199-mph high-altitude crosswinds to make a gentle, controlled landing just four-and-a-half feet from the center of the pad." In the video below, you can see the rocket approaching the ground at dramatically high speeds, then slowing rapidly with a final rocket thrust as the landing gear deploys. Meanwhile, the drogue parachutes on the capsule unfurled at 20,045 feet, helping the crew craft make a (fairly) gentle desert "splashdown."

The New Shepard and BE-3 are intended to be used in Blue Origin's suborbital space program, mainly for a commercial space tourism. Blue Origin hasn't set a date for flights yet, but the program is intended to carry six astronauts to the boundary of space at around 100 km in altitude. Also in that race is Virgin Galactic, which itself was badly set back by its SpaceShip 2 crash that resulted in the death of a pilot. Blue Origin's BE-3 rocket may also be used by United Launch Alliance to power the second stage of its Vulcan orbital rocket.

Source: Blue Origin, Blue Origin
In this article: BE-3, BlueOrigin, JeffBezos, Landing, reusable, Rocket, space, timeline16race4space, timeline16rocketman, video
All products recommended by Engadget are selected by our editorial team, independent of our parent company. Some of our stories include affiliate links. If you buy something through one of these links, we may earn an affiliate commission.