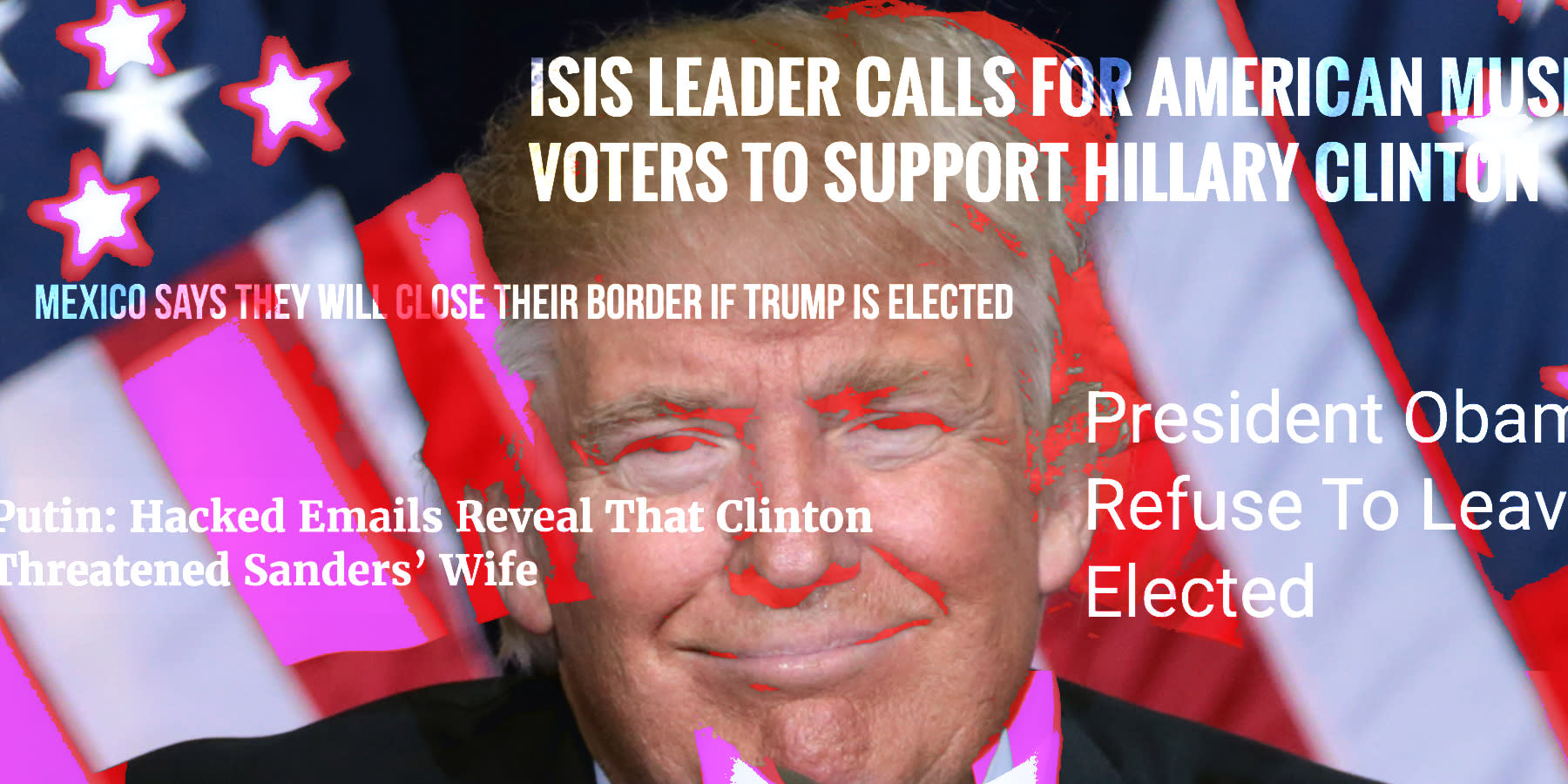 To battle fake news is to battle brain chemistry.

Fake news has dominated post-election headlines, and important questions have been asked: Would Hillary have won had almost a million people not read that Pope Francis had endorsed Trump? (Probably not). Did Facebook take enough action to prevent fake news proliferating on its network? (Definitely not). But few have asked why these articles were so popular in the first place. Why were so many people duped into clicking these stories?

Earlier this month, BuzzFeed News' Craig Silverman analyzed engagement (likes, comments, shares, etc.) across Facebook and identified the most popular real and fake articles across three distinct periods: February to April, May to July and August to Election Day.

With this analysis, Silverman was able to show that the 20 most popular fake posts were "engaged with" (Facebook's term for likes, shares and so on) 8.71 million times in the lead up to the election, compared to just 2.97 million times in February to April. Mainstream news showed the opposite pattern: Starting at 12.4 million, and falling to 7.37 million in the final period -- 1.34 million less than the fake news. The overall number of engagements is fairly steady, too, suggesting that, at least to some extent, Facebook users were sharing fake news instead of real stories.

Last year, a group of researchers from Brazil's Federal University of Minas Gerais and the Qatar Computing Research Institute, analyzed 70,000 articles from four major news organizations (BBC News, Daily Mail, Reuters and The New York Times) to measure the correlation between headline sentiment and popularity. Although results varied from publication to publication, the general finding was that the more extreme the emotion in a headline, the more likely it is to be clicked on.

This runs both ways, the group said: "A headline has more chance to be successful if the sentiment expressed in its text is extreme, towards the positive or the negative side. Results suggest that neutral headlines are usually less attractive." You're more likely to click on a story that says "This is the best" or "This is the worst" than "This is quite okay."

"A headline has more chance to be successful if the sentiment expressed in its text is extreme."

Could sentiment analysis explain fake news' popularity? As Silverman made the statistics he gathered public, I asked the researchers to run the same dissection on all of the stories in the dataset. Their script uses multiple methods (including valence scoring) to determine the positivity (or negativity) of each word in a headline, before giving it a final "sentiment score."

The scale we're using runs from -4 (negative) to +4 (positive). A few examples: Vox's "The smug style in American liberalism" got a -1, while The Guardian's "Millions of ordinary Americans support Donald Trump. Here's why," is one of the more positive, scoring a +0.75. Few stories get higher or lower than a full point away from neural. Washington Post's "Max Lucado: Trump doesn't pass the decency test" was one of the most extreme mainstream stories, scoring a. -1.37.

Inferring meaning from this requires some guesswork, and there are two possible explanations, according to Kwak. Either fake news writers are intentionally doing this for "clickbait" purposes, or they "naturally use more negative words" because of the topics they're writing about. An in-depth qualitative study might show which of the explanations is valid, but given the fake news writers were generally trying to make money from clicks, the former seems likely to be a driving factor.

Looking across the three periods, something else becomes clear: The average sentiment of real news became slightly more negative (from -0.14 to -0.2) while fake news became more positive (from -0.4 to -0.23). "This contradicts with our expectation that fake news became more aggressive over time," said Kwak. Look at the stories themselves, though, and you can see the problem with the sentiment analysis. The fake news headlines in the pre-election period are atypical. Unlike those of traditional news, these headlines are complex, long and often switch viewpoint.

Take the fake story "BREAKING: Hillary Clinton To Be Indicted... Your Prayers Have Been Answered." The first half of this headline is clearly negative, the second half, clearly positive. As the sentiment scoring ascribes an average for the entire headline, the story was given a +0.29 score. There are other examples of this: "Thousands Of Fake Ballot Slips Found Marked For Hillary Clinton! TRUMP WAS RIGHT!" Kwak explained that things like Trump endorsements "could boost the sentiment score slightly to be positive."

This mixture -- very positive with very negative -- is something of an anomaly and would require a new method of sentiment analysis to really dig into. But, it would appear, it does make for a very clickable headline. Kwak also noted that the dataset mixes headlines about Trump and Clinton. "If there were separate datasets for each candidate, it may bring a more interesting result."

Sentiment analysis can't be used to show whether news is true or false, but it does show the way headline writers, like marketers, manipulate our emotions to inspire us to click, like or share a story. Jonah Berger is a Wharton professor and the bestselling author of Contagious: Why Things Catch On, a book that attempts to unearth the science behind "going viral." What makes an advertisement, a YouTube video or a tweet catch on?

According to Berger, virality comes down STEPPS, a backronym of six ideals. There's Social currency (we share things that make us look good to those around us), Triggers (the nugget of a product or idea), Emotion (a message with an emotional component is more likely to be shared), Public (the more public something is, the more likely people will imitate it), Practical value (useful things get shared), and Stories (if you want to spread an idea, embed it within a narrative). A good piece of marketing will hit as many of the STEPPS as possible.

Look at BuzzFeed News's dataset -- with the assumption that these Trump-positive stories were shared by Trump supporters -- and you can see the fake news ticking every marketing box. You have a piece of breaking news that hasn't been reported elsewhere (Social currency, Practical), that's positive for Trump (Emotion, Stories), with the crux of the article in the headline (Triggers), all shared -- often by people they know -- on a trusted public forum (Public).

Berger's findings differ slightly from Kwak's. "People are more likely to share more positive content, in part because what people share is a signal," Berger told Engadget. "Most people don't want to be seen as a Debbie downer, always sharing negative news."

BuzzFeed News' data isn't complete. We don't know if people were actively sharing stories, liking them, or commenting. The net result is the same, as Facebook will surface those comments and likes among a user's social circle, but the intention may not have been to share. "Negativity may certainly drive clicks," said Berger. "We pay attention to negative things, even if we don't share them. If it bleeds, it leads."

It could be that many people were simply reading these stories because they were there, and they seemed interesting. We interact with fake news in much the same way as real news, or advertising, then. The same things that make a news story too tantalizing to ignore, make people at least click on them.

"Clickbait" is a term that, to me, originally meant a story with a misleading headline -- a click-bait and switch, as it were. It's now more difficult to define. Cataphoric headlines -- titles that refer to something within the article -- are now often branded as clickbait: "You won't believe why police arrested this 102-year-old woman" is a classic example while "Nintendo's Super Mario Run for iPhone and iPad now has a release date and price" is a more subtle take. They're withholding all or some of the news from the potential readers, in order to get them to click.

Many of the fake stories highlighted by BuzzFeed News employ similar tactics. The top story in the lead-up to the election was "Pope Francis Shocks World, Endorses Donald Trump for President, Releases Statement." Much of the news is there, but the author has appended "releases statement" to the headline to ensure you click. Next is "WikiLeaks CONFIRMS Hillary Sold Weapons to ISIS... Then Drops Another BOMBSHELL!" This follows the same pattern: valuable information up front, cataphora later.

The third-placed story, "IT'S OVER: Hillary's ISIS Email Just Leaked & It's Worse Than Anyone Could Have Imagined" is the most cataphoric, offering way more tease than information. Berger calls this a curiosity gap. "It raises awareness of a gap in knowledge, where clicking on the link is the only way to solve the puzzle."

Preposterous stories are inherently more clickable than believable ones.

This suggests that preposterous stories are inherently more clickable than believable ones. Perhaps that shouldn't be a surprise. Humans are easily manipulated: With only a meager understanding of our psychology, politicians, journalists, marketers, filmmakers, authors and, yes, news scam artists, are able to make us think and feel pretty much whatever they want.

Applying quantitative analysis to our actions feels dehumanizing, as no one wants to be told they don't have agency over their behavior. But in this case, it's important to do so. It's vital that Facebook, and other companies that have become the gateway to current events on the internet, understand how easy it is for our emotions to take over.

"Fake news is becoming a bigger and bigger issue," said Berger. "But to solve it we can't blame people for being silly, dumb or biased. We have to understand why people click and share, and use that science to encourage people to engage with the important, true information."

All products recommended by Engadget are selected by our editorial team, independent of our parent company. Some of our stories include affiliate links. If you buy something through one of these links, we may earn an affiliate commission. All prices are correct at the time of publishing.
View All Comments
Clickbait, fake news and the power of feeling