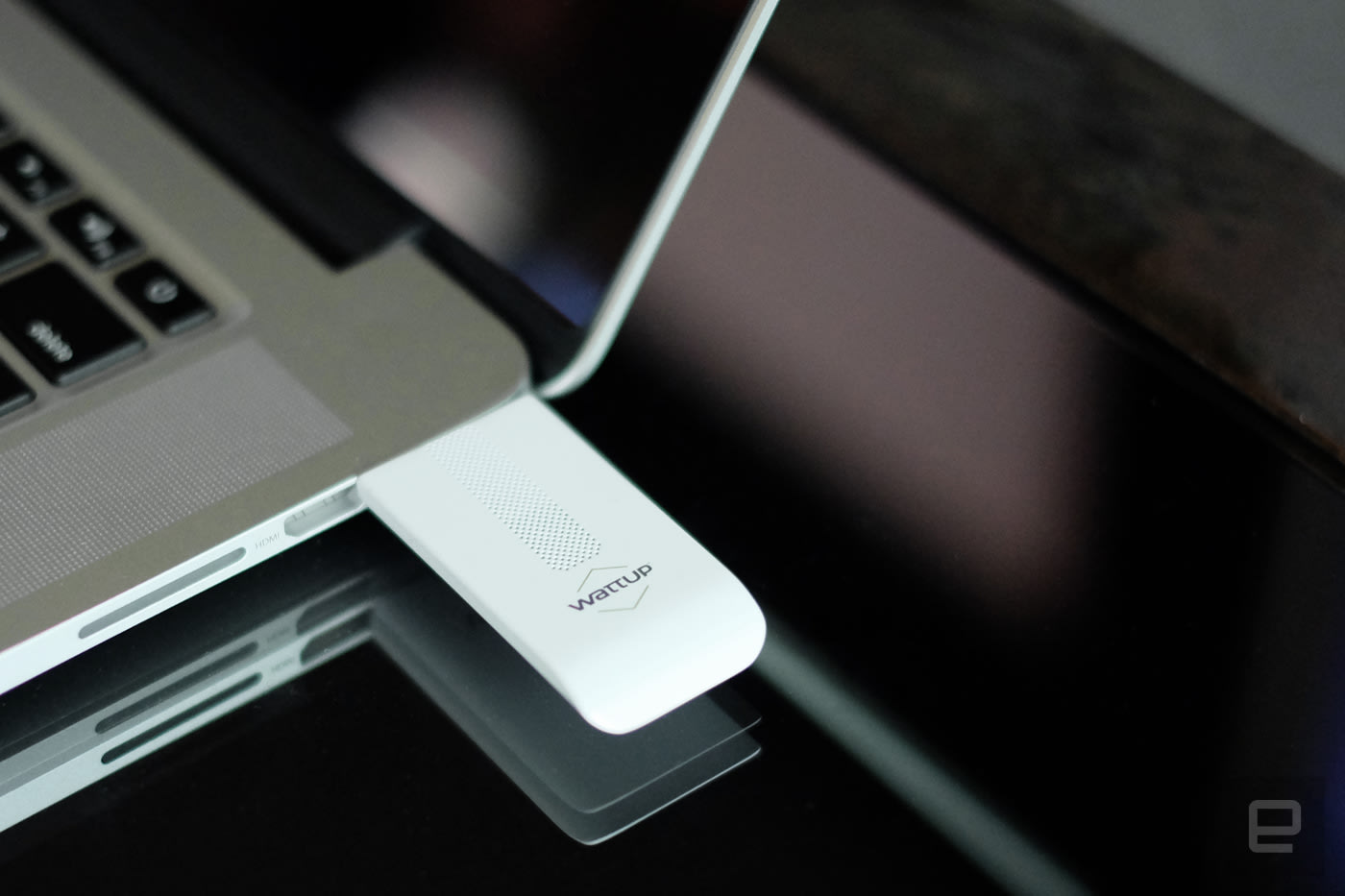 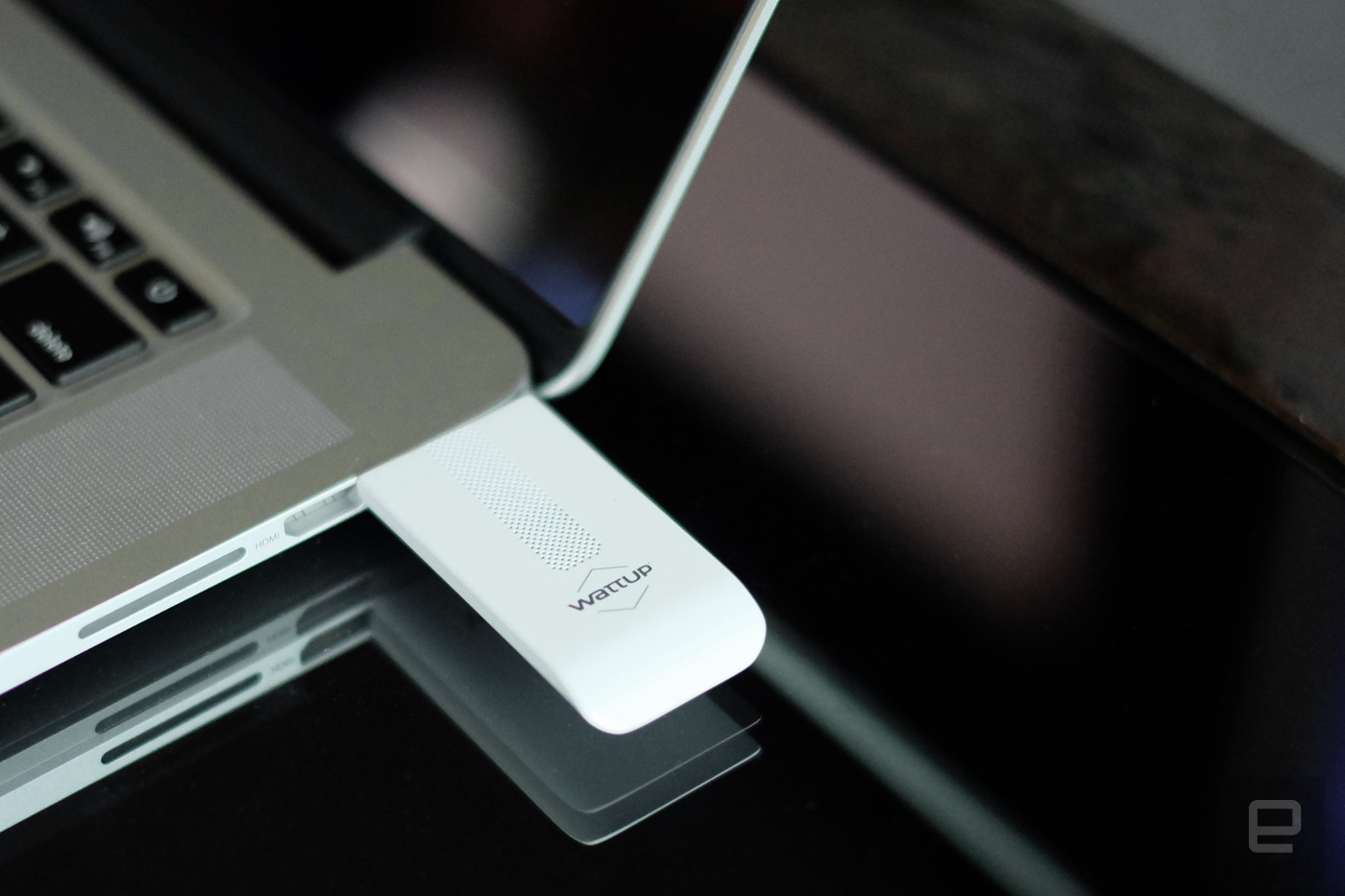 Energous' wireless charging tech WattUp made a splash at CES 2015, promising to charge your devices from 15 feet away with an "energy router." After winning two Best of CES awards, though, it dropped off the radar. And as is so often the case with CES innovations, a year has passed and there's nothing with the tech inside on the shelves. This year, it's back at the trade show explaining why that's happened, and how things will change in 2016.

For the uninitiated, WattUp uses RF to charge devices. It's a two-step process. First, a transmitter locates a compatible device via Bluetooth, then it sends out RF waves on the same 5GHz band as WiFi in a focused beam toward it. The compatible device has antennas and chip to convert the waves into DC, which charges the battery. Converting RF to DC -- "rectification" -- is a well-established concept, but the combination of focused RF and the WattUp receiver chips is an efficient (and patented) application of the idea.

Energous' problem in a nutshell is that persuading a manufacturer (it designs the technology rather than building consumer products) to peddle a $200-$300 router is difficult without other manufacturers building compatible devices to charge. It's very much a chicken-and-egg situation. 2015, Company founder Michael Leabman says 2015 was about proving that the tech worked, further miniaturizing it and finding more business partners.

If that's the criteria you're judging the company by, 2015 was a success. It had its technology checked out by Underwriters Laboratories (UL), a safety consulting and certification company with over a century of experience, and it ... checked out. UL validated that it could deliver over 5.5 watts of power from 5 feet, over 3.5 watts of power from 10 feet, and 1 watt from 15 feet. It also showed that its energy routers could charge two devices from 5 feet with no drop off in power received. For context, a standard iPhone charger delivers 5 watts.

In addition to proving to the world that there are no smoke and mirrors involved, Energous has miniaturized its tech significantly. Today it's announcing a "pocketable" energy router that's capable of powering devices placed in its immediate vicinity. It's intended as a "pack-in" for wearable manufacturers, a replacement for the USB cable that comes with low-power devices from companies like Fitbit, Pebble and Misfit. 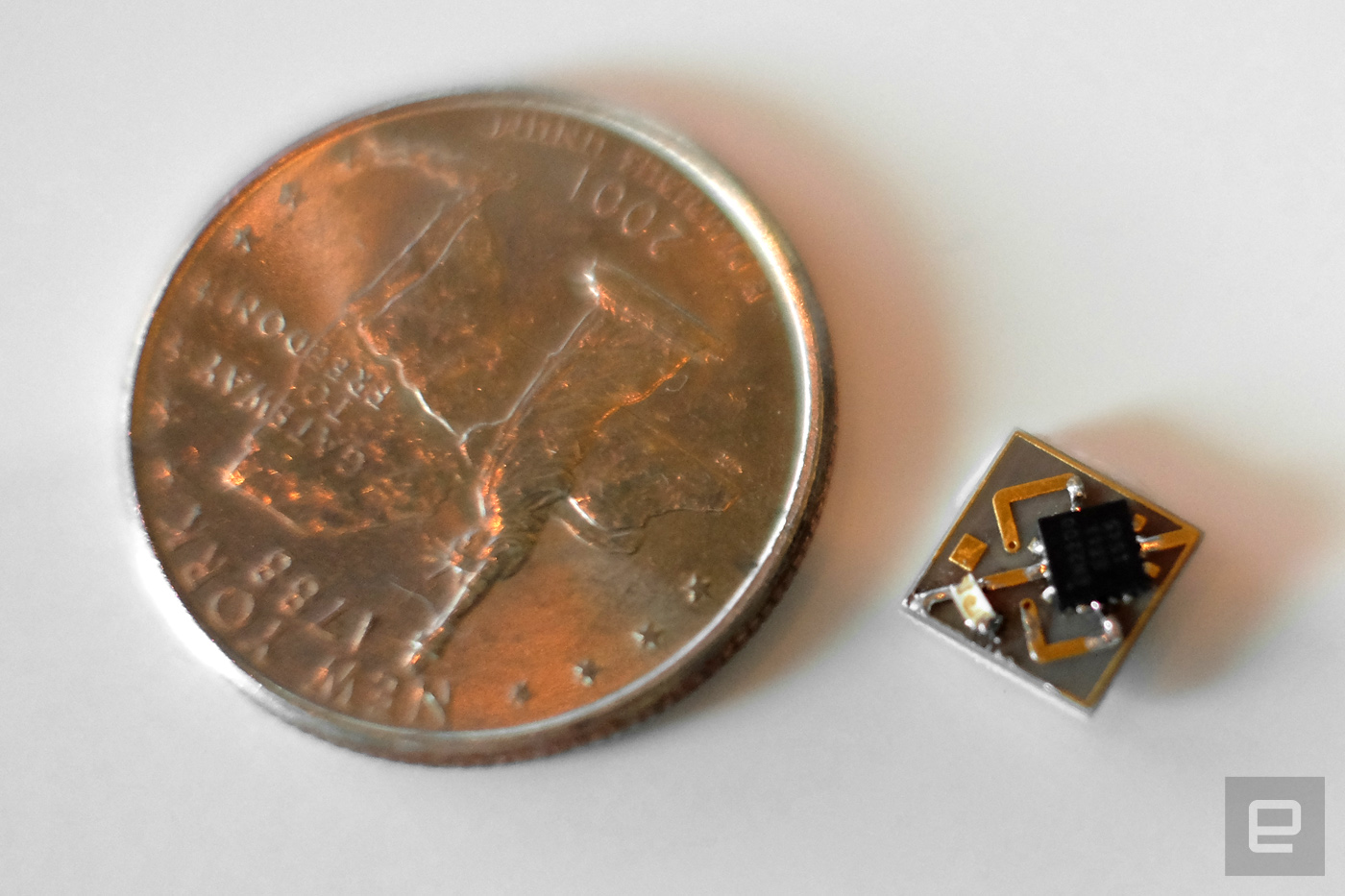 Energous' receiver chip next to a quarter.

It's easy to see this as an alternative to the inductive charging that you'll find on a Moto 360 or an Apple Watch, but Leabman is quick to point out that it's not that simple. Inductive charging requires a coil inside the device to work, and the Apple Watch's coil, for example, is about the size of a dime. That's way too big to fit inside a Fitbit or even a Pebble. For Energous' system, all that's required is a receiver chip measuring just 3mm square -- all these devices have Bluetooth already -- meaning it could easily fit into any wearable you can think of.

We watched this new low-power system in action via one of the company's "evaluation units," which it's going to send to potential partners for testing. It was able to charge a Fitbit, a Bluetooth headset and a simple LED light system from around 6 inches at exactly the same rate as their respective wired chargers would. To be clear, this is exactly the same tech we've seen powering phones in the past, and it's fully compatible with the full-blown, 15-foot system. It's just a far cheaper way of doing it. Leabman claims a simple USB dongle like this would not add a noticeable cost to the price of a wearable over a plug-in charger system. 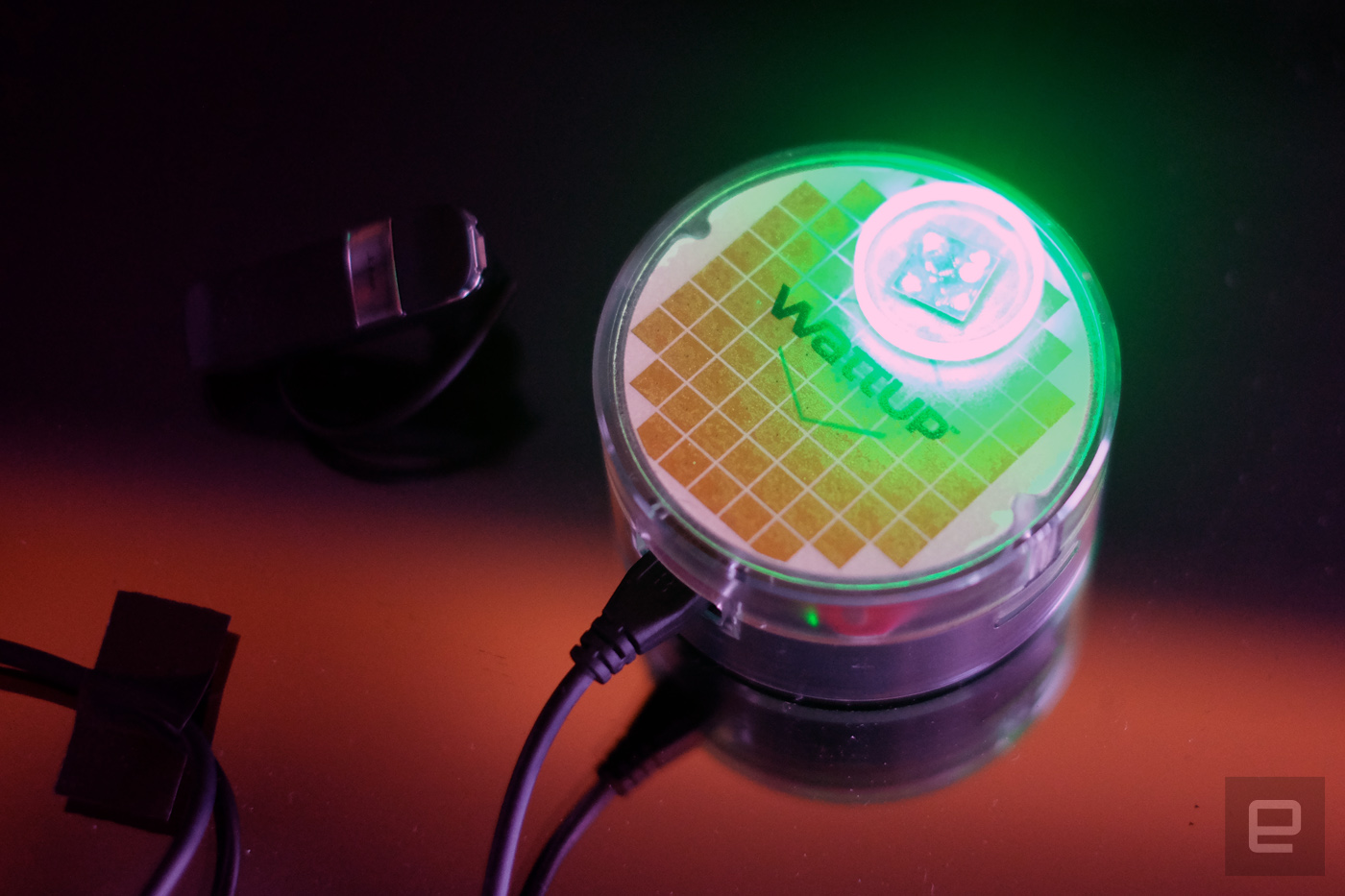 A WattUp evaluation unit powering an LED light while charging a Bluetooth headset.

The developments over the past year are encouraging, but most people aren't judging Energous on whether its technology works -- it clearly does. They'll evaluate its success on the number of products it's selling and how much money it's making. The answers to those questions are not very many, and not very much. It's only generating any income at all through existing partnerships.

One of those partnerships has the potential to be huge for Energous, but the company is bound by an agreement to not talk about the exact details. It says it has a contract with a "tier one" manufacturer that's apparently "one of the top five consumer technology companies in the world." Depending on your definition of "consumer electronics company" the top five changes significantly, but we're probably looking at either Samsung, Apple, Microsoft, Sony, Intel, HP or Dell. And given that WattUp really isn't any good for charging devices larger than a smartphone right now, it's unlikely to be either of the last two on that list.

What this product will look like really isn't clear. We know the chip is going to be embedded inside something, be it a case or a device itself, and it'll be sold with a transmitter of some description in the box. Leabman also said the product will be manufactured in the millions, so it's definitely a large-scale launch. As for when it'll release, that's not really for Energous to decide, but it believes the device will launch towards "the end of 2016, or early 2017." Let's hope that, when the time comes for CES 2017, we're not still waiting for this promising tech to actually make an impact.

In this article: ces, ces2016, Energous, energouswattup, gadgetry, gadgets, gear, mobile, WattUp, wearables, WirelessCharging
All products recommended by Engadget are selected by our editorial team, independent of our parent company. Some of our stories include affiliate links. If you buy something through one of these links, we may earn an affiliate commission.