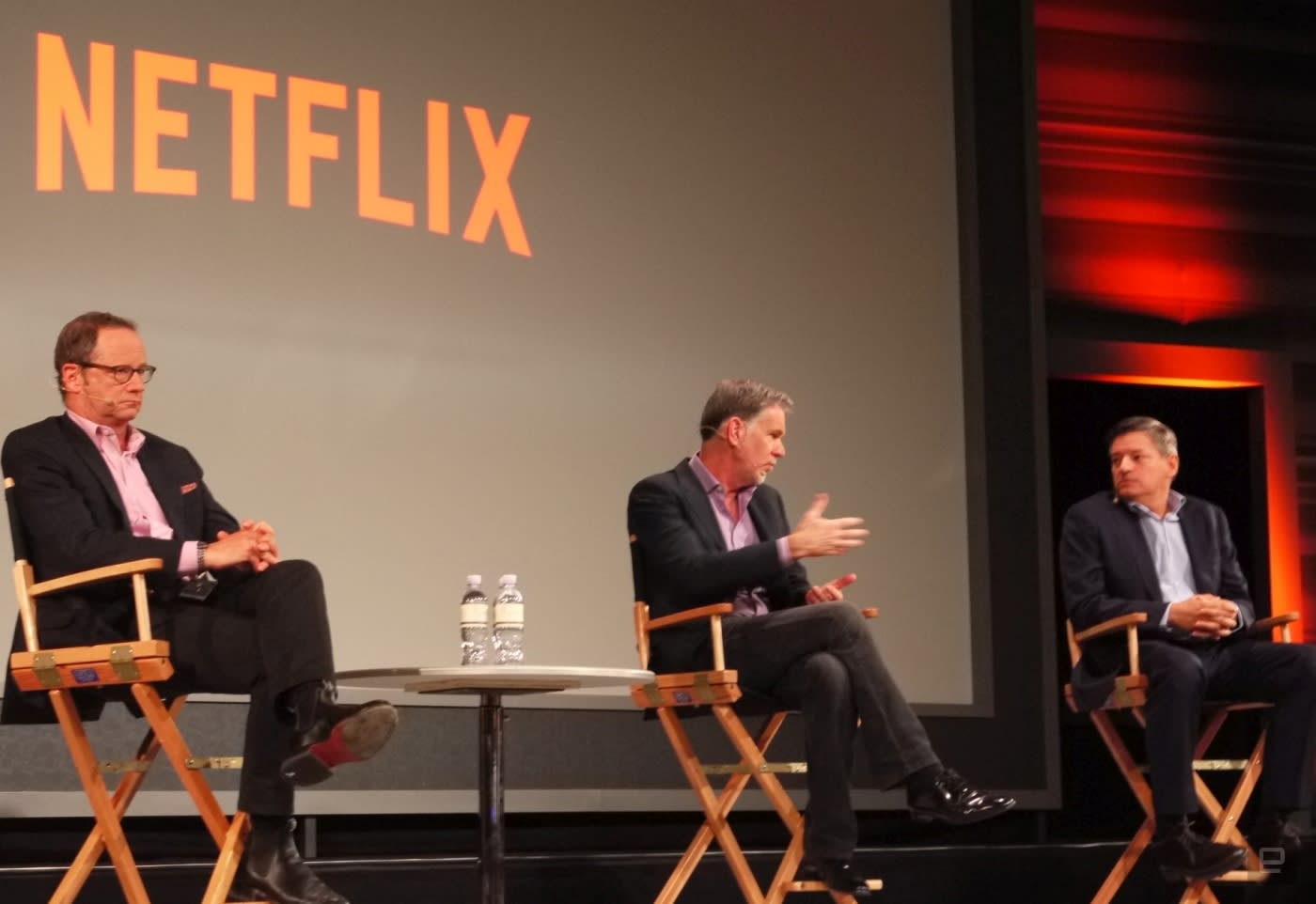 In their first Q&A session since launching a (nearly) global internet TV network, Netflix CEO Reed Hastings and content head Ted Sarandos sounded appropriately pleased with themselves. Sarandos said the recent debut of Adam Sandler's Ridiculous 6 made it the "most-watched movie in Netflix's history" over the first 30 days. Previously he'd said Beasts of No Nation was the service's most-watched movie in its first week of release and that it had over 3 million views in North America after two weekends, but he did not provide any numbers for Sandler's movie. Most of the questions focused on what content would be available worldwide, and from them, it's clear that Netflix is not only operating differently from most others in the TV business but also sees its opportunities in a different way. While Sarandos called movie windowing "managed dissatisfaction," Hastings presented a goal of global availability. But Netflix has to operate under preexisting restrictions for now.

While the company will probably continue to make coproductions that may limit the availability of a show or movie in one country, any originals in the future will appear for viewing in most of the countries it serves, all at once. However, those restrictions could include editing for content: When asked if different regions may see different versions of the same original Netflix production, Hastings responded, "We'll see and we'll have to learn." Variety notes that currently a show like Marco Polo has censored nudity in Japan, even though it doesn't elsewhere.

Still, it turns out that while rolling out to 130 new countries at once was a hard thing to do, both executives said that choosing to launch House of Cards a few years ago -- and diving into producing original content -- was a harder decision. Sarandos called that "a little bit of a blind leap" but said the most surprising thing is how well certain shows that aren't made for an international audience are received around the world. Also, now that the international rollout is largely finished (with the exception of North Korea, Syria, Crimea and China), its content teams can focus on building the libraries.

The big difference between Netflix and cable companies or Hulu, according to Hastings, has something to do with the company's U.S.-centric viewpoint. Worrying about catch-up windows and nightly ratings is for everyone else. Netflix is "focused on being great around the world."

In this article: AdamSandler, av, ces, ces2016, entertainment, international, netflix, ReedHastings, Ridiculous6, TedSarandos
All products recommended by Engadget are selected by our editorial team, independent of our parent company. Some of our stories include affiliate links. If you buy something through one of these links, we may earn an affiliate commission.