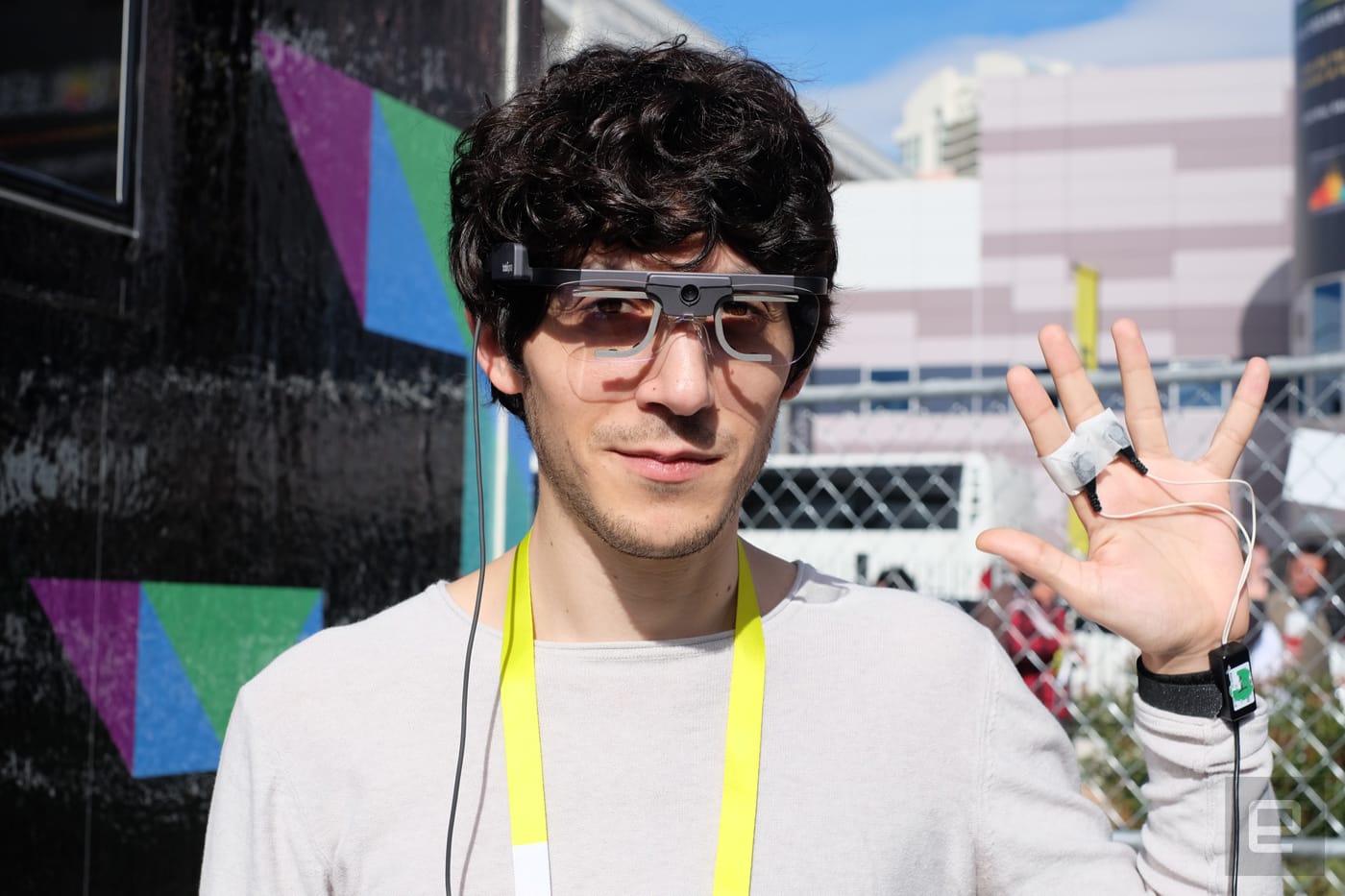 After four days on the ground in Las Vegas, I thought I didn't care about any of the new products announced this year at the Consumer Electronics Show. But Nielsen Consumer Neuroscience hooked me up with an array of sensors to prove otherwise.

It started half an hour before the doors officially opened for day one of CES 2016. A team from analytics company Nielsen came to the Engadget trailer and wired me up with sensors. They put monitoring devices on my chest, wrist and fingers. designed to keep tabs on my heart rate, breathing and changes in the electrical properties of my skin (GSR). Then came the eye-tracking glasses, which would record what I was seeing and pinpoint exactly where I was looking. Nielsen doesn't make any of this hardware. It just wraps it up in a package, and has the software and neuroscientists to make sense of the data.

The question I went into this with, and the one you're probably asking yourself now, is "why?" Why is Nielsen, a company better known for its audience ratings and sales reports, working on this sort of technology? The answer surprised me. It's not "working on it." It's been using this setup for years.

Companies pay Nielsen, or more specifically Nielsen Consumer Neuroscience, to get members of the public wired up with sensors and put them in front of products. It does a lot of work with brick-and-mortar stores to give them feedback on their layout and visual merchandising, It works with TV shows and movies on "product integrations," making sure that viewers notice the placement, but don't find it annoying. It even works with websites to help them get the right balance between user experience and advertising. More recently, it's been working with a sports team to help them understand the experience of a fan watching a game in a stadium versus on the TV at home.

But back to my CES experiment...

I wore the sensors for an hour, during which I walked the CES Central Hall, home to the vast booths of Samsung, LG, Qualcomm, Intel and others. At twenty minute intervals during the experience, I was asked what I thought were the products that interested me the most. And after the sun had set on CES day one, I sat down with Nielsen's chief neuroscientist, Carl Marci, who talked me through the results. Dr. Marci and his team had made notes on the entire hour, and presented me with a timestamped document showing me what I felt at any given moment. Here's how it played out. 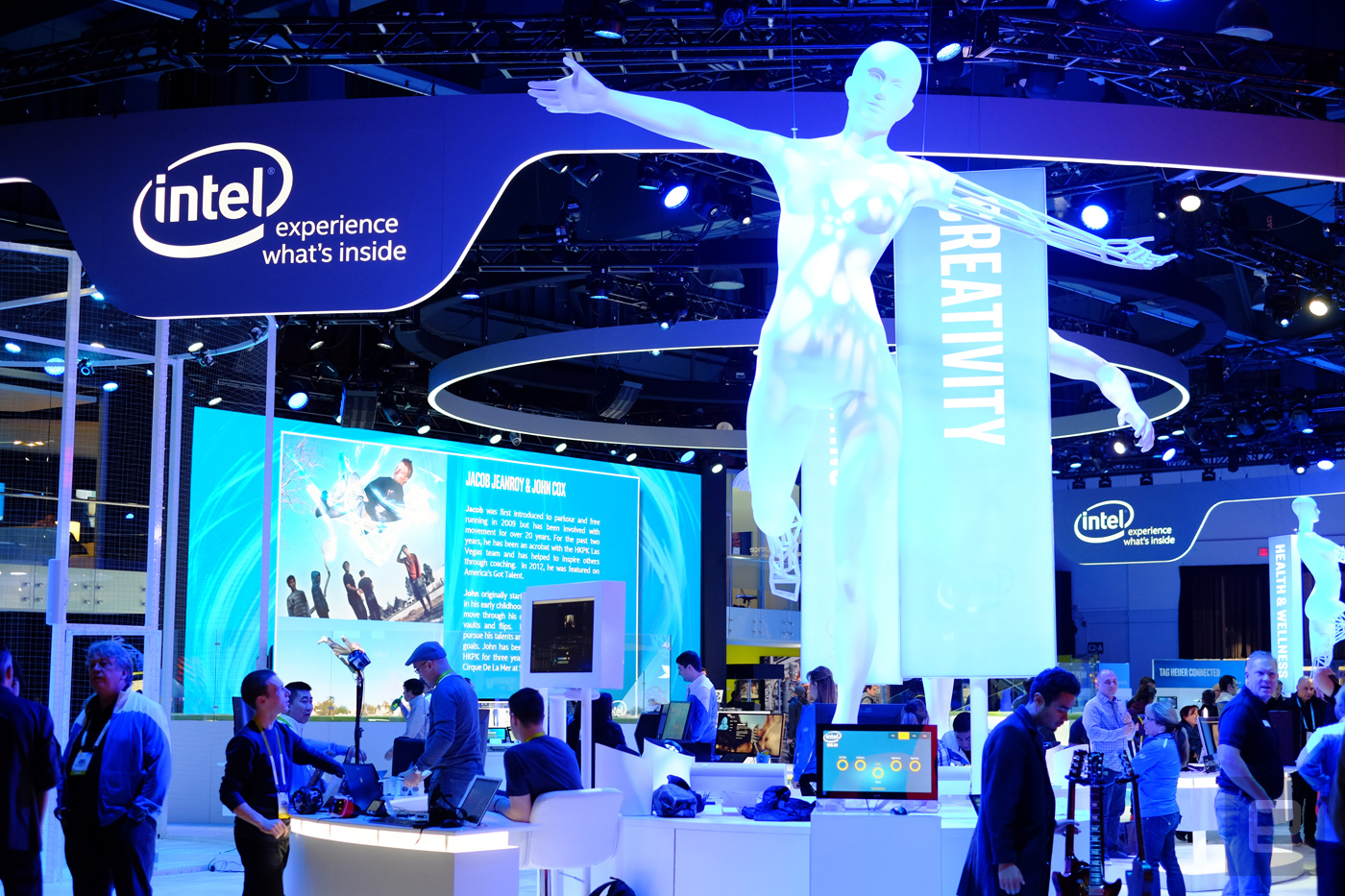 One of the first booths I walked through was Intel's, which includes lots of laptops, wearables, connected devices and a drone. At the time, I didn't know what the hexocopter was, and so over the next minute or so I wandered around the drone's fenced-off paddock trying to work out what was going on. My chief thoughts at the time were: "What is this?" and "Do I have time to work out what this is?" And then I began to get a little nervous – was I wasting too much time on this thing? Drones are interesting enough -- I've been flying a Phantom 3 Standard a fair amount over the past few months -- but they've totally lost the "wow" factor for me. And so I moved on.

Dr. Marci's notes on the Intel booth play out much like you'd imagine. While I listened to pitches on stuff with Intel processors inside, there was no reaction. I'd half-expected that my prolonged time with the drone might have tricked them into thinking I was fascinated by it. But it didn't, and the team pointed out my lack of response in their notes. In fact, they even picked up on my nervousness about time-wasting: "Drone demo elicits large HR [heart rate] response, no GSR. How does Aaron feel about drones? Nervous? Hey, cool?" 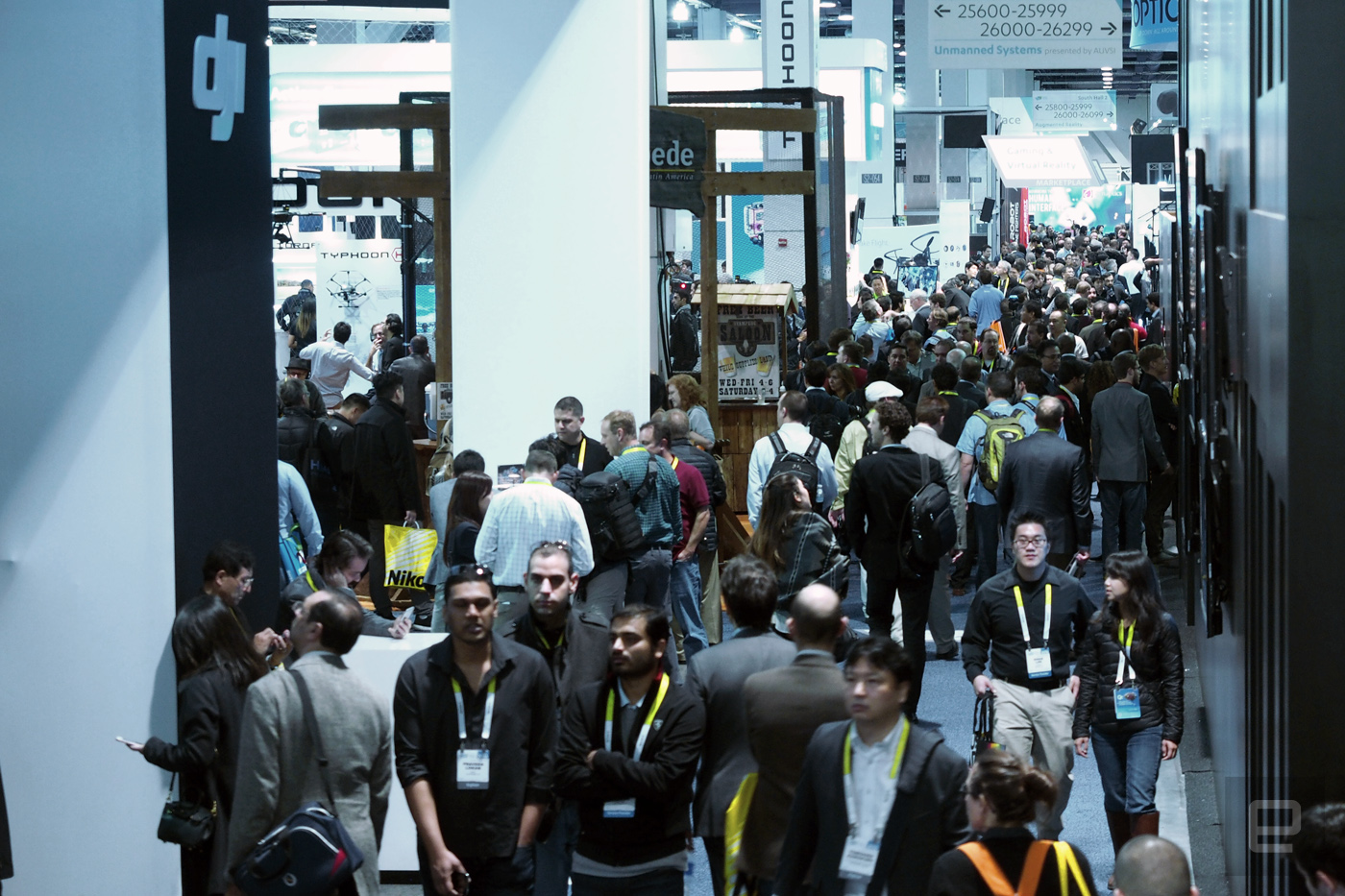 I really dislike crowds. Especially at trade shows, where I'm trying to do my job and everyone else seems to want to walk slowly and take selfies with various inane products. Imagine trying to do your job in a crowded subway car full of the worst people in the world, and that's pretty much my CES show floor experience in a nutshell. Walking away from Intel's booth, I began searching for things to look at. I visited the TCL, Qualcomm, DJI, Royole, Nikon and Casio booths. Nothing interested me massively, except a cross-section of a Nikon D5. This moderate lull continued until I -- after getting slightly lost -- found my way out of Central Hall.

Nielsen's data shows hundreds of small spikes in GSR when, for example, people bump into and talk to me or I pause to concentrate on climbing stairs. These anomalous spikes are why you can't just look at one piece of data. I wasn't engaged with the large gentleman who stood on my foot, but if you just look at the GSR readout, you might think that.

This section of the experience was punctuated by small-to-medium spikes in GSR. The largest product-related one was a "medium spike at Qualcomm watches," but more significant was "big spike as he transitions into a new hall, anticipation?" That's an almost spot-on observation. I was mostly very pleased to be out of Central Hall, but was also aware the LG booth was around the corner.

The first thing I saw at LG was a sort of "planetarium" of TVs, which was really well done: a number of TVs surrounding you, playing ultra-high definition content as one giant enveloping display. Next, I saw the sign for the company's new OLED TV set, which I hadn't actually seen but knew about from other Engadget editors. I wandered up to the section and saw the TV spinning slowly on a pedestal. When it spun to a near 90-degree angle, I was gobsmacked. Here's why: 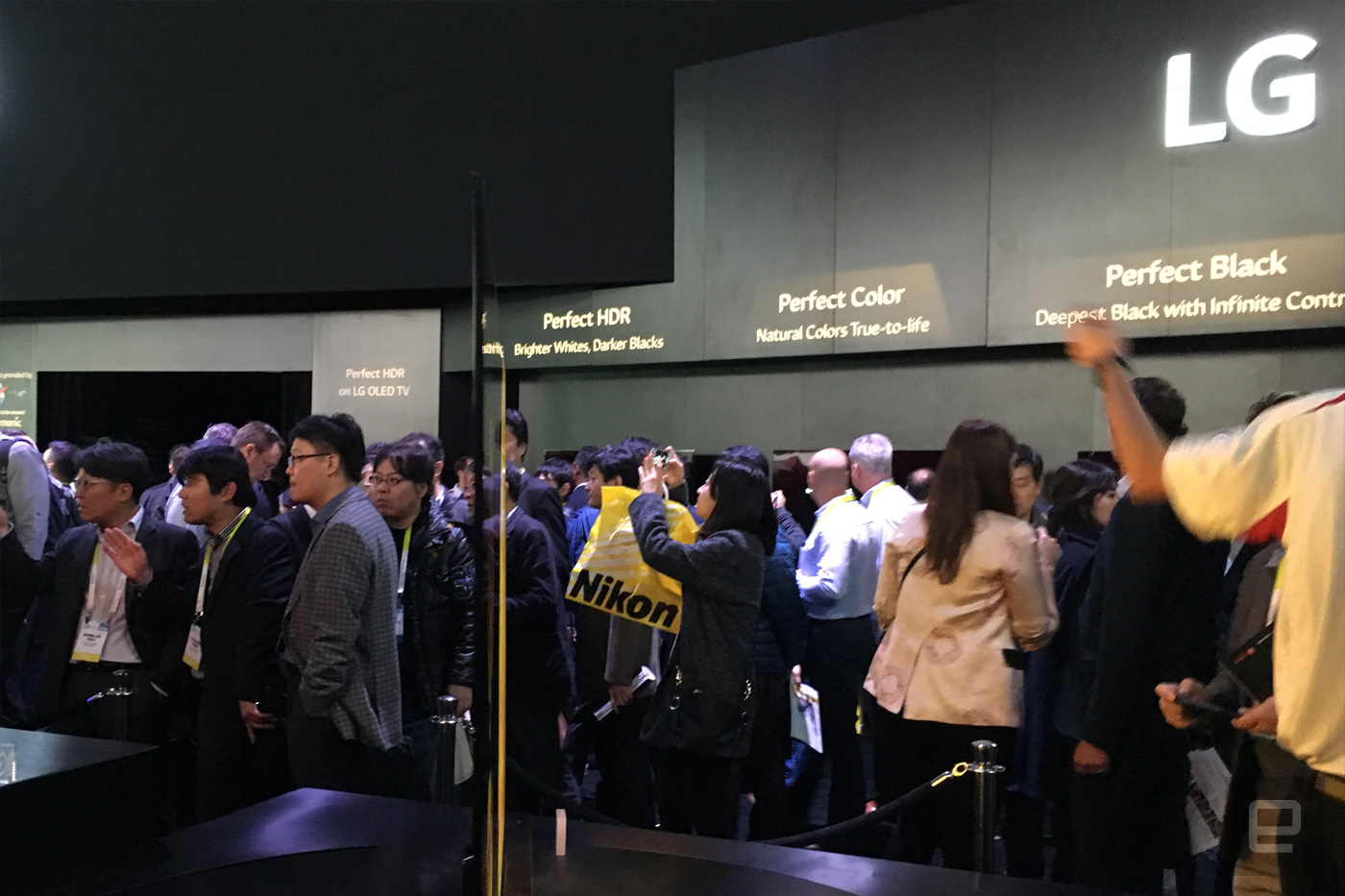 After hanging around there and taking the photo above with my phone, I wandered around the rest of the LG booth. It's filled with loads of washing machines and home appliances that I'm never going to buy.

Or maybe I will? Dr. Marci's data show a "series of small spikes" while I watched an LG device that shakes shirts while they dry to stop them creasing. But of course, the largest product spike of the LG booth – and the entire show floor experience – was for the LG OLED TV. There was a "double medium spike" as I stopped to watch it spinning, followed by a large one when it spun to 90 degrees. Interestingly, as I take a photo of it, both my heart rate and GSR drop, something that's apparently normal when focusing on a single task.

After the LG booth, I realized that the other giant Korean company was my best shot at a grand finale for the experience, and so I headed to Samsung. There are a lot of TVs there, as you'd expect. Aside from "the world's largest SUHD TV," I saw some curved sets, and a giant wall setup showing off ultra-high definition content. There was also a lot of Android stuff and the usual array of home appliances. It felt pretty underwhelming, especially after LG's showing.

As I'd expected, the results of my Samsung booth tour were flat. There were a few spikes as I interacted with various phones and watches, but weirdly my biggest reaction was a "medium to large spike on Samsung Active Wash machine with embedded sink." Since I got the results, I've been trying to work out why that is, and I think I've got it. Everywhere I've lived has had a similar setup: either a front-loading washer or combination washer-dryer, almost invariably in white -- laundromats really aren't a thing where I'm from. And because I write about consumer tech like phones, tablets, PCs and drones on a daily basis, LG and Samsung's glitzy home appliances, with their exotic form factors and features, are probably the most unusual things I see at a show like CES.

Here's the thing: When I was asked to list my highlights, I included the Intel drone, the Nikon lenses and the LG planetarium. No LG OLED TV. At the time, I was simply recalling the things that I'd spent the most time looking at and equating that with interest.

As I went about my day following the walkthrough, the thing I remembered, and talked about most, was the LG OLED. Dr. Marci's team didn't know that, but when I met them later on they correctly picked that out as my highlight, in spite of my telling them otherwise. They also exposed my interest in Korean home appliances, something that I was almost entirely unaware of until now.

Turns out, my little jaunt on the CES show floor expertly highlights the benefits of Nielsen's focus on neuroscience. One of the few projects Dr. Marci was able to precisely divulge was the company's work with Fox Sports on its "double box" advertisements, which display adverts around events like Nascar where commercial breaks wouldn't be appropriate. When asked, some viewers thought they ignored the advertisements. Nielsen, however, was able to show, using the same sensor array I wore, that viewers did take in the advertisement while still watching the sports event.

My little jaunt on the CES show floor highlights the benefits of Nielsen's focus on neuroscience.

This dichotomy between what people think they saw and what they actually saw almost exactly mirrors my own neuroscience experience at CES. And it shows why the companies that pay for this research put their faith in the technology. With the right people analyzing the data, Nielsen can provide insight that no focus group can. And as technology improves, its usefulness will only grow.

Although the neuroscience kit I tried has been around in some form for a few years, Nielsen has been updating the individual parts as and when improved tech becomes available. More recently, Nielsen has been using simplified versions of the platform that rely on smartwatches and P.O.V. cameras, enabling "budget-sensitive" companies to gather data.

At the other end of the spectrum, it's also evolving its methods to incorporate more advanced sensors. Within the next few months, it'll start rolling out an in-lab platform with a 32-array electroencephalogram (EEG, a device to monitor brain activity) and high-quality cameras for both eye-tracking and decoding facial expressions. This super high-end setup is going to be used for video ad testing for its clients in controlled environments.

A lot of companies are likely to use something that falls somewhere between the two extremes. Dr. Marci says he's working with "one of the big movie distributors" to more accurately monitor focus groups that view early cuts of movies and give feedback. Maybe by tracking excitement levels, they can cut out those lulls in big-budget movies, or even trim short an overly long action sequence.

Dr. Marci talks a lot about balance. The future of advertising, he believes, isn't some dystopian nightmare where we're bombarded with commercials. It's about offering people a choice: Watch this ad, or don't. Read this ad, or don't. Click this ad, or don't. Nielsen Consumer Neuroscience's research is really about making the first choice in all those questions the most attractive it can be.

In this article: ces2016, gadgetry, gadgets, gear, intel, lg, samsung, science
All products recommended by Engadget are selected by our editorial team, independent of our parent company. Some of our stories include affiliate links. If you buy something through one of these links, we may earn an affiliate commission.