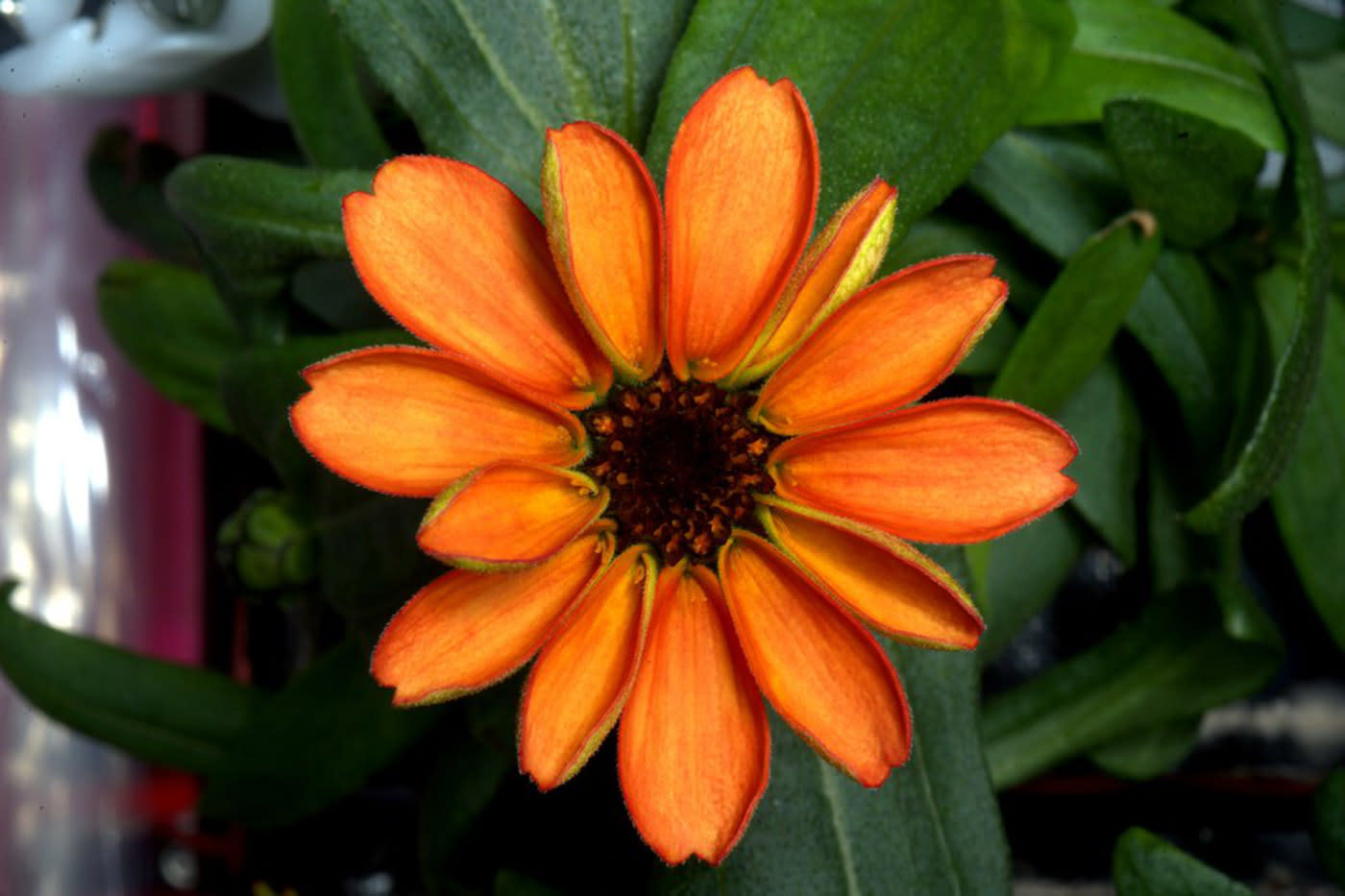 NASA astronaut Scott Kelly can brag about having a green thumb all day long, and we wouldn't mind at all. He's earned that right by successfully growing the first flower in space after the zinnia plants the ISS crew planted almost died. The astronauts started growing zinnias late last year, but a mere two weeks later, the team noticed symptoms of excessively high humidity and limited air flow. The plants' wicks (seed containers), for instance, leaked water, and the leaves became unnaturally bent and curled. Around Christmastime, things came to a head when some of the plants grew mold.

Kelly took charge of the zinnias after that -- he even told NASA he'd decide when to water them instead of following a schedule. "...if we're going to Mars, and we were growing stuff, we would be responsible for deciding when the stuff needed water," he said. On December 27th, he tweeted a photo of the ailing organisms, saying he'd have to "channel his inner Mark Watney" to ensure their survival. While some of the plants ended up dying anyway, he ultimately succeeded nurturing at least one until it flowered.

The molds and the dead plants the crew collected are nowhere near useless, though. The ground team will study them when they get the samples back, so we can understand how different it is to grow plants in outer space -- on Mars, in particular -- compared to here on Earth. NASA chose zinnias for this stage of the project, because it has a longer growth duration than romain lettuces. That makes them an important stepping stone towards growing tomatoes.

If you recall, the crew also grew the veggies aboard the ISS sometime ago. That stage suffered setbacks, as well, with its first batch dying off due to drought. Eventually, the team managed to grow a good batch and even had the chance to eat their produce. It'll take some time before any astronaut gets to eat a space-grown tomato, as NASA isn't planning to send seeds to the ISS until 2018. The plan itself sounds like a great idea, though. After watching Matt Damon eat nothing but bland potatoes in The Martian, we owe it to future space travelers to make sure we can grow other crops on the red planet.

Our plants aren't looking too good. Would be a problem on Mars. I'm going to have to channel my inner Mark Watney. pic.twitter.com/m30bwCKA3w

Some of my space flowers are on the rebound! No longer looking sad! #YearInSpace pic.twitter.com/HJzXaTItIf

[Image credit: NASA]
In this article: iss, nasa, science, space
All products recommended by Engadget are selected by our editorial team, independent of our parent company. Some of our stories include affiliate links. If you buy something through one of these links, we may earn an affiliate commission.