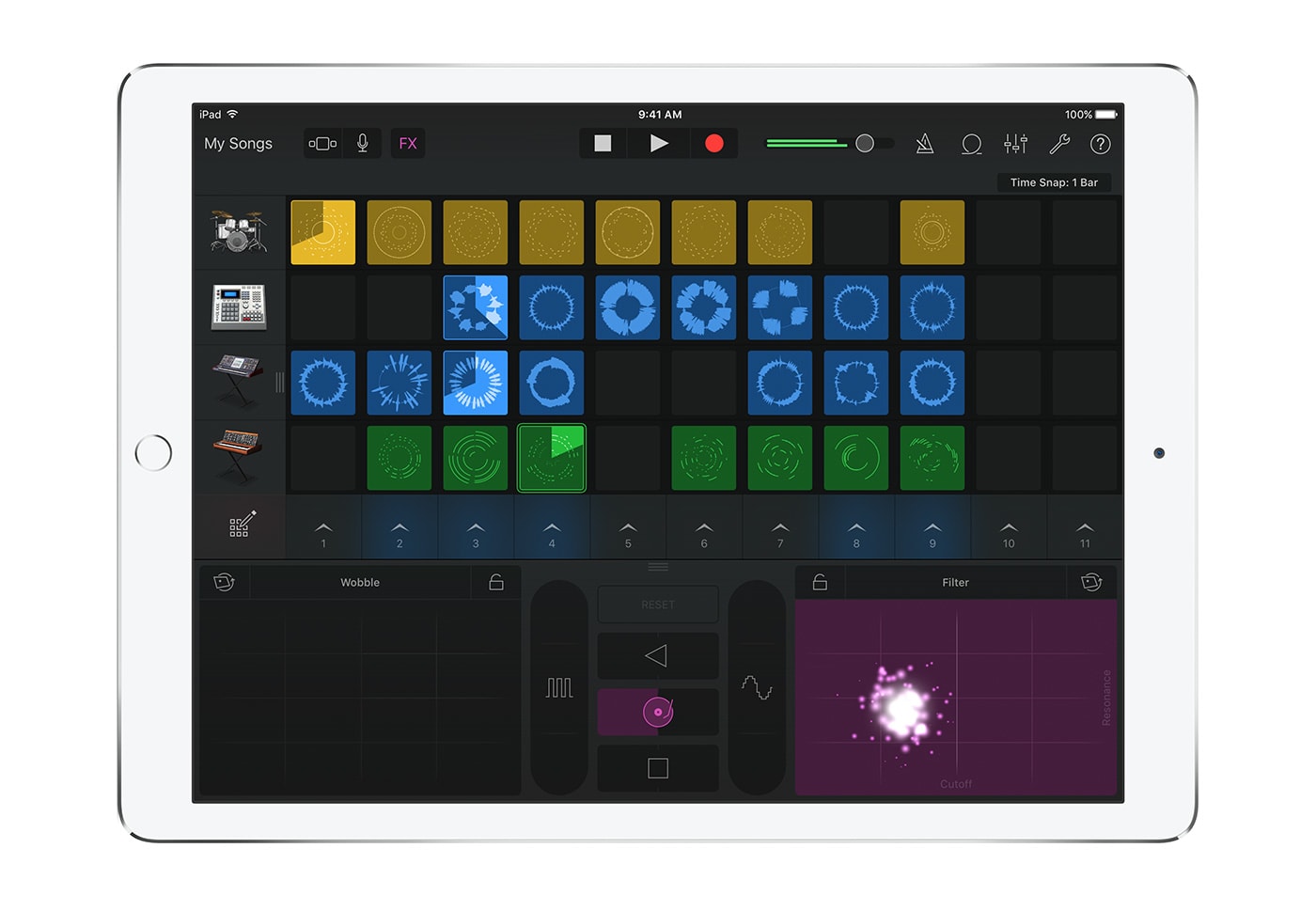 Oh, you thought Apple's new recording app was the company's only music-related news today? Not quite. Apple also pulled back the curtain on a new version of GarageBand for iOS — 2.1, if you're keeping count — and with it comes the ability to craft decent EDM, Dubstep, and even Funk tracks with surprisingly little effort. It's all thanks to a new feature called Live Loops, which more or less turns your iDevice into a launchpad for either the dozens of royalty-free loops Apple has made, or ones you've created or obtained yourself.

I spent a few days playing with the GarageBand update on an iPad Pro, and while it turns out I'm no Madeon, I still walked away from the experience feeling like kind of a badass. It shouldn't shock you to hear that the GarageBand shines on bigger screens, but iPhone 6s and 6s Plus owners can use 3D Touch to squeeze some more gusto out of Apple's virtual instruments.

Anyway. When you jump into the Live Loops interface, you're first asked whether you want to mess with one of several genre presets, including EDM, Hip-hop, Dubstep and Rock (among others). Popping into any of those gives you a template of preloaded cells — tapping on any of them plays the loop at your specified tempo, and tapping an icon at the bottom of the column plays all of the loops contained within it. Congrats: that's 90 percent of the learning curve accounted for already.

After a while, though, you'll want to start making your own stuff. Thankfully, sifting through Apple's loops is simple enough — you can filter by instrument, genre and mood and just drag them into the grid. When you need more control over your sound, there are effects panels waiting for you. Dragging your fingers inside the proscribed effects squares let you manipulate, stutter and apply gonzo filters to your tunes. Just for kicks, Apple threw in a way to control those effects by tilting your iDevice to and fro; too bad it's more of a novelty than a properly useful tool. Oh, and of course, there's a key smack in the middle of those effects panels to scratch and stop some virtual vinyl for good measure. 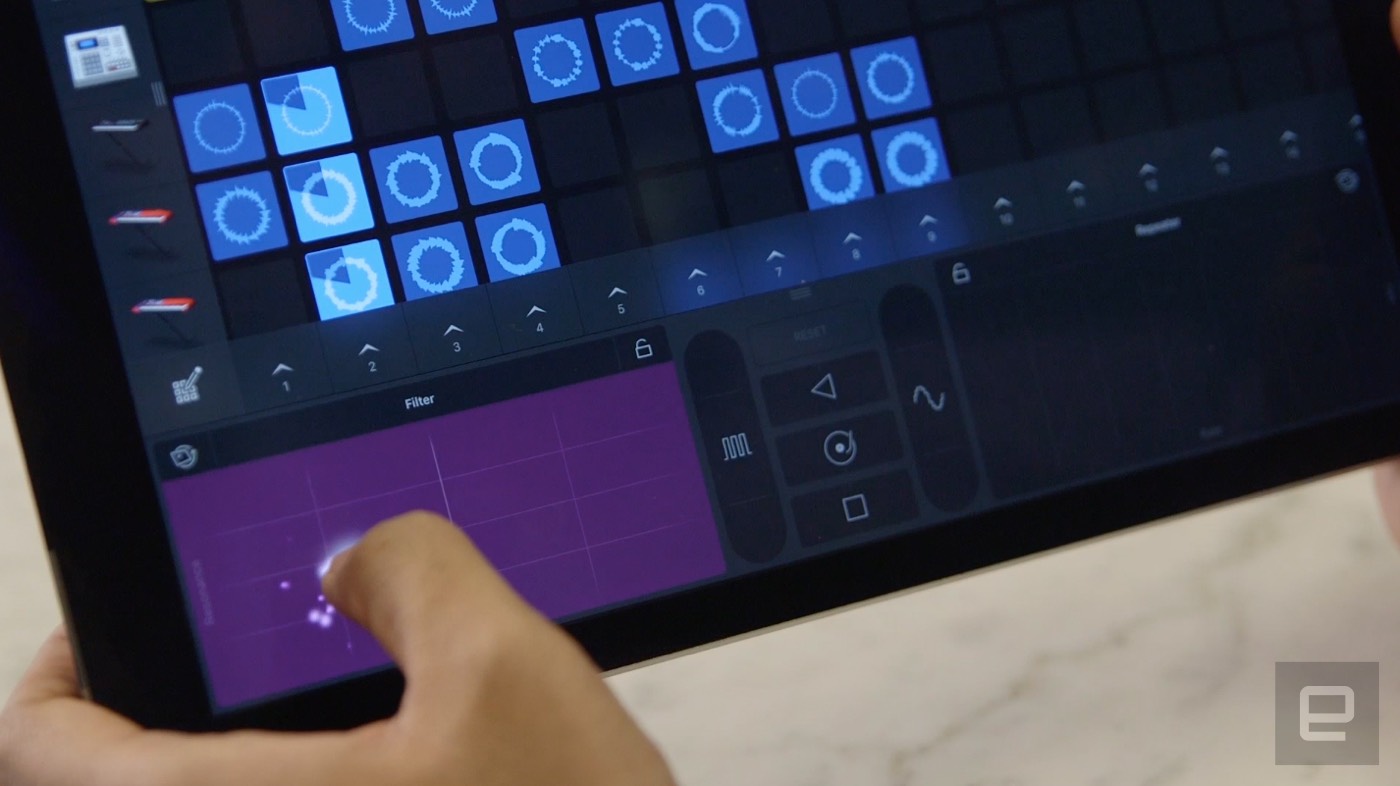 You can record audio straight into launcher cells, too, be it from GarageBand's virtual instruments or from third-party software. Seriously. Apple teased so-called "Audio Unit Extensions" at WWDC last year, and this version of GarageBand for iOS is the first to let you pull audio straight from apps like Arturia's iSEM, a faithful recreation of a decades-old synth. Throw in the ability to have a virtual session drummer — yep, the one from the desktop version of GarageBand — throw in some automated fills and you've got a remarkably thorough way to make music song with basically zero musical know-how.

More than anything else, though, this GarageBand update is just fun. Mostly. There were moments after laying down loops where I realized I didn't actually know a damn thing about constructing songs, but any lingering sadness evaporated when I realized dumb luck could be just as potent as talent. You'll probably have better luck putting together a new chart-topper than I will, so keep your eyes peeled -- the update should hit the App Store today and will come bundled with new iPhones and iPads with at least 32GB of storage.

In this article: app, apple, av, garageband, gear, handson, ios, mobile, music, software
All products recommended by Engadget are selected by our editorial team, independent of our parent company. Some of our stories include affiliate links. If you buy something through one of these links, we may earn an affiliate commission.