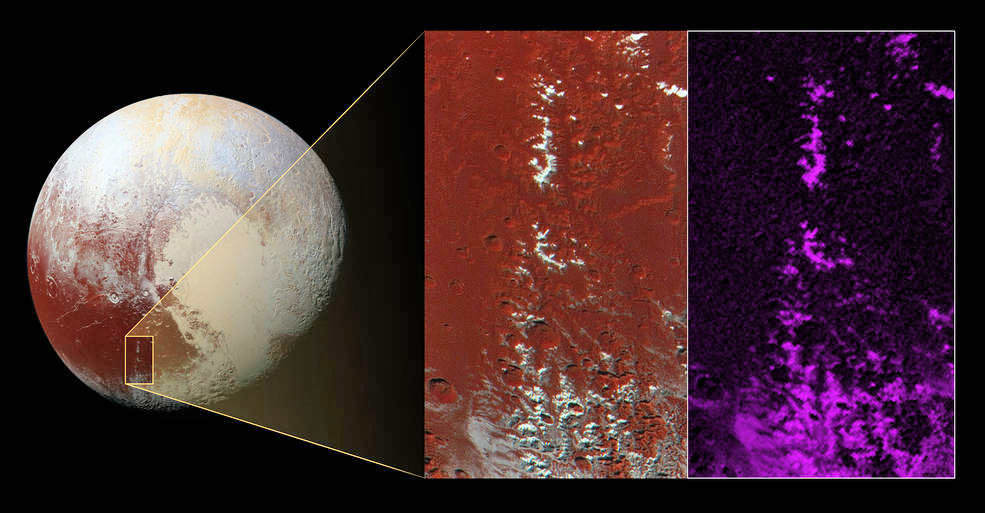 Right now, most mountaineers covet the seven summits: the highest peaks on each continent. In the (very, very distant) future the big seven might be redefined as the highest peaks across the solar system. A whimsical thought, perhaps, but a newly-discovered mountain range on Pluto will have even the most amateur of Earth-based climbers intrigued. The frosty-looking peaks are located in the south east of a region known as Cthulhu, and stretch out over 260 miles in length.

The images were originally taken during New Horizon's closest fly-by point back in June last year. The images were taken from about 21,000 miles away, and (for a sense of perspective) have a resolution of about 2,230 feet (680 meters) per pixel. The purple image on the right is a composite of data from the Ralph/Multispectral Visible Imaging Camera on New Horizons, and shows the distribution of methane. As it almost exactly matches with the areas shown in white on the enhanced color image, scientists believe that on Pluto, methane acts like water in Earth's atmosphere, condensing into frost at altitude.

Via: Gizmag
Source: NASA
In this article: Cthulhu, mountains, nasa, newhorizons, pluto, science, space
All products recommended by Engadget are selected by our editorial team, independent of our parent company. Some of our stories include affiliate links. If you buy something through one of these links, we may earn an affiliate commission.