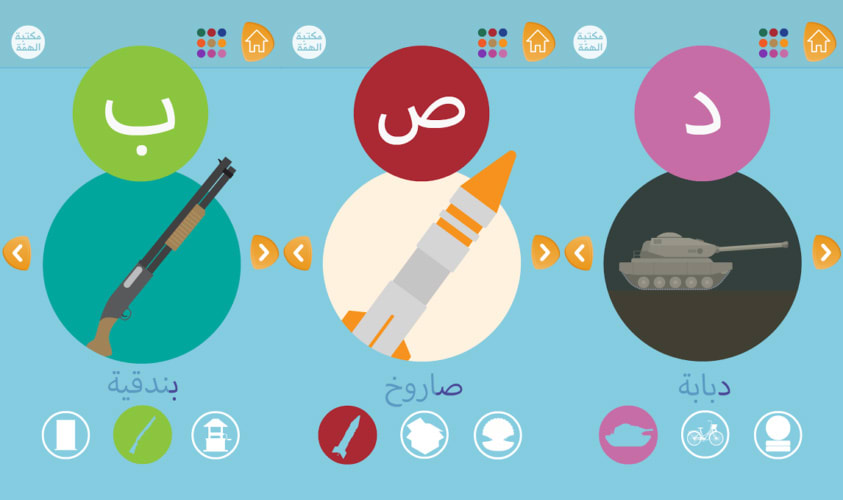 A new Android app from the tech-savvy extremist group ISIS hopes to help out busy ISIS parents by teaching their kids to read and militarizing them at the same time. The app, called Huroof, was released via the Islamic State's Telegram channel and includes games for learning the letters of the Arabic alphabet with militaristic vocabulary words like "tank" and "rocket."

In addition to the alphabet flash cards, the app also includes learning songs reportedly loaded with jihadist terms and appealing, cartoonish animations. While the learning app isn't the first from the Islamic State, Threat Matrix reports, but it is the first to be aimed at children. While the United States Military Cyber Command might be taking the Islamic State's online threats more seriously these days, apparently no one predicted the group would go after the world's youngest Android users.

The encrypted messaging app Telegram, for their part, has started cracking down on ISIS-related activity. Back in November of last year, the app claimed it had banned 78 channels in 12 languages allegedly tied to the group.

Via: The Next Web
Source: Threat Matrix
Coverage: The Guardian
In this article: android, culture, gaming, isis, mobile, politics, teaching, telegram
All products recommended by Engadget are selected by our editorial team, independent of our parent company. Some of our stories include affiliate links. If you buy something through one of these links, we may earn an affiliate commission.