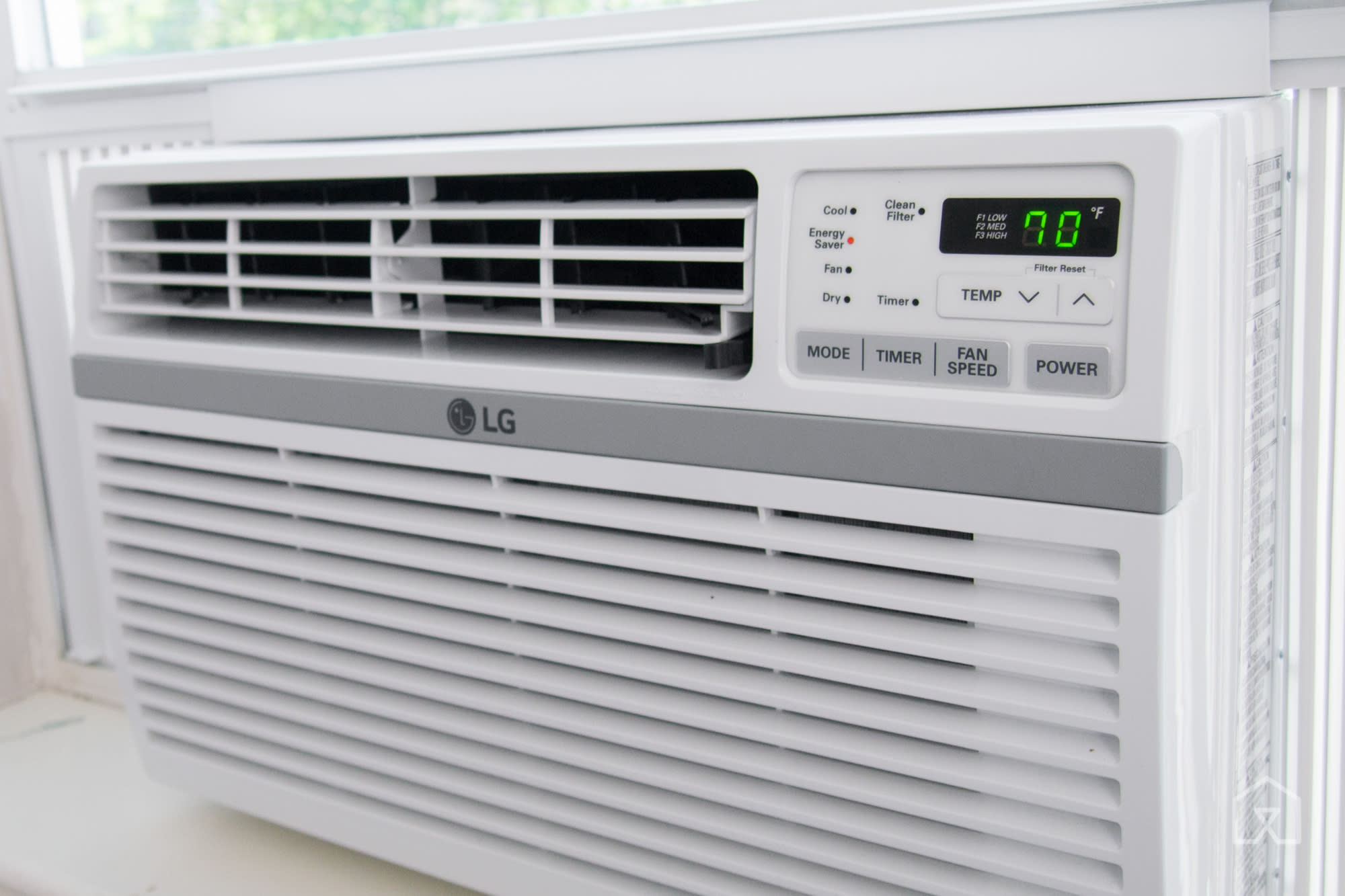 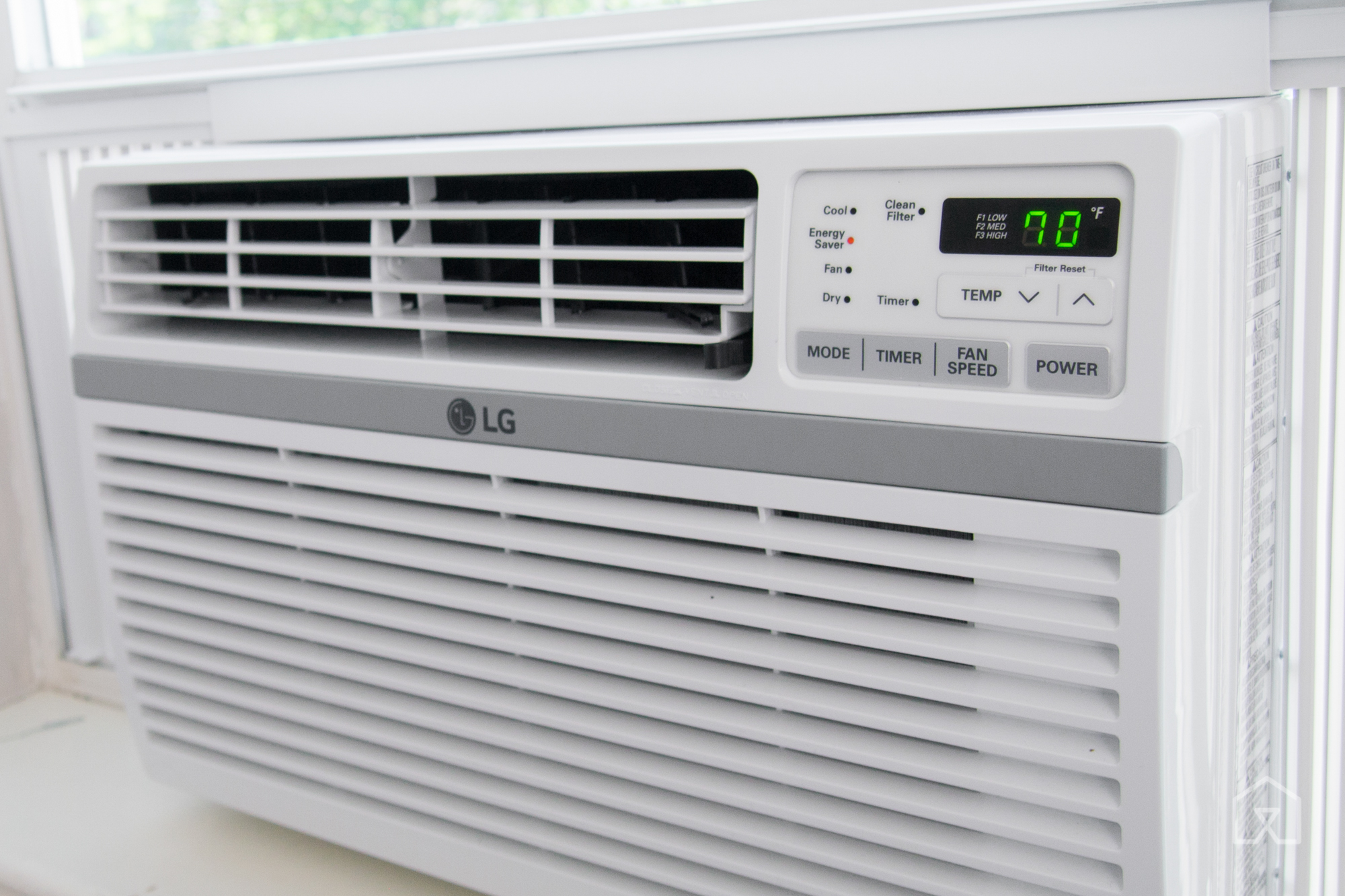 After five summers of researching, testing, and recommending window air conditioners, we've learned that quiet and affordable ACs make most people the happiest—and we think the LG LW8016ER will fit the bill in most rooms. It cools as efficiently and effectively as any of the latest ACs with an equal Btu rating, and compared with other window ACs at this price, it's easier on the ears and gives you more control. The LG is a top choice for an office or den, and some people will find it quiet enough for a bedroom, too. 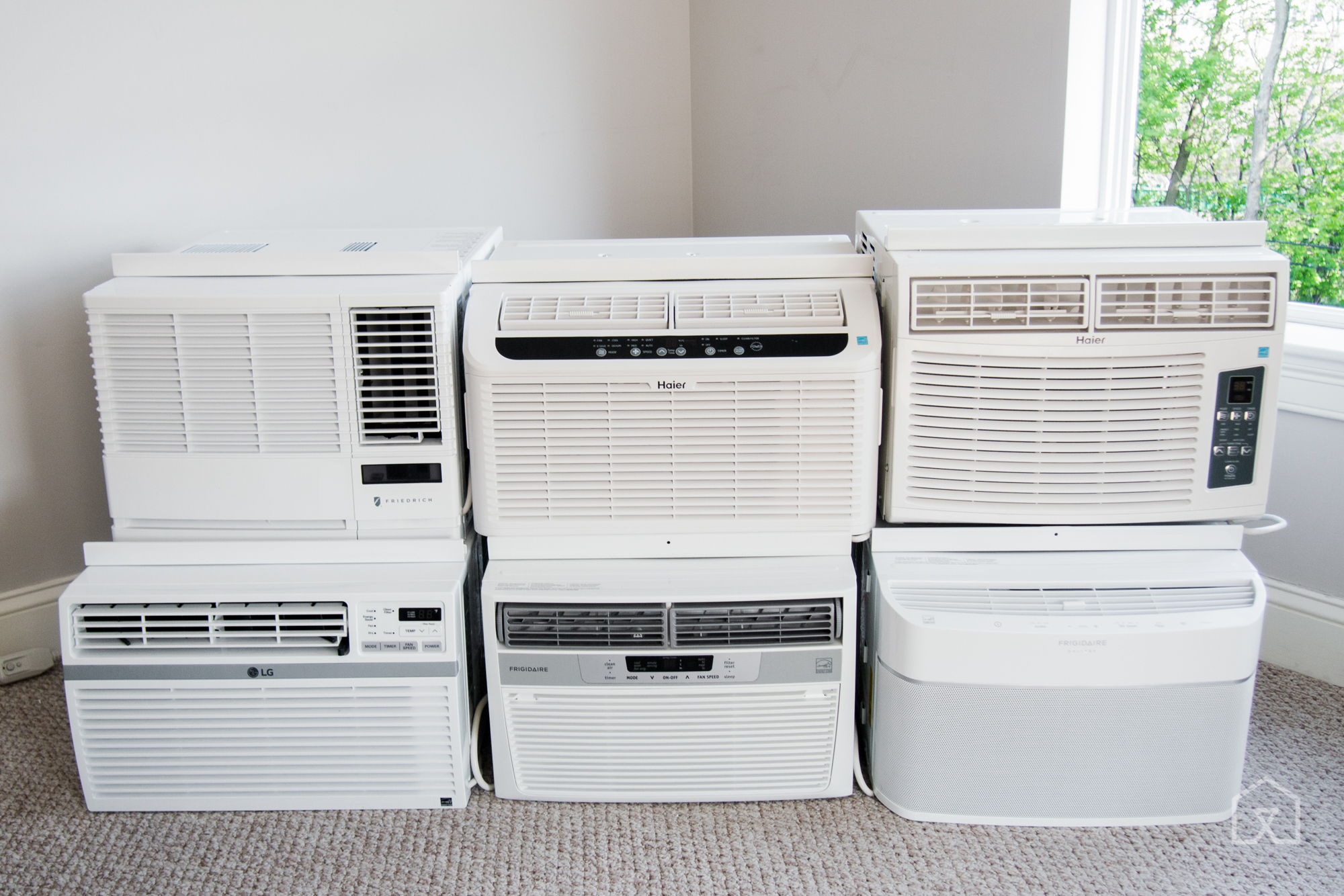 The air conditioners we tested in 2016. (Note: Stacking them in this way does not constitute a proper installation.) Photo: Liam McCabe

For this guide, we focused on 8,000-Btu window air conditioners because it's the most popular size at retail, which implies that it's what most people need. These ACs are suited for spaces between 300 and 350 square feet, roughly the size of a comfy living room or large master bedroom. We tracked down about 30 current-model window air conditioners with that cooling capacity. Then, based on specs, features, price, and our experience with older versions of some models, we settled on seven finalists.

We focused on noise as the primary distinguishing factor. Window air conditioners are all pretty damn loud these days—and louder than they used to be. But some models are easier on the ears than others, and we heavily favored air conditioners with a lower operating volume and a smoother frequency response.

The other way we judged our finalists was the level (and quality) of user control they allowed. One important area where window ACs can differ is their fan vents, which control the direction of airflow. If you sleep near your AC, you'll want to be able to point the cold air away from your body, or at least away from your head. But some models have blind spots where airflow can either never reach or always reaches. We also considered the number of fan speeds, extra cooling modes, and the depth of remote control. 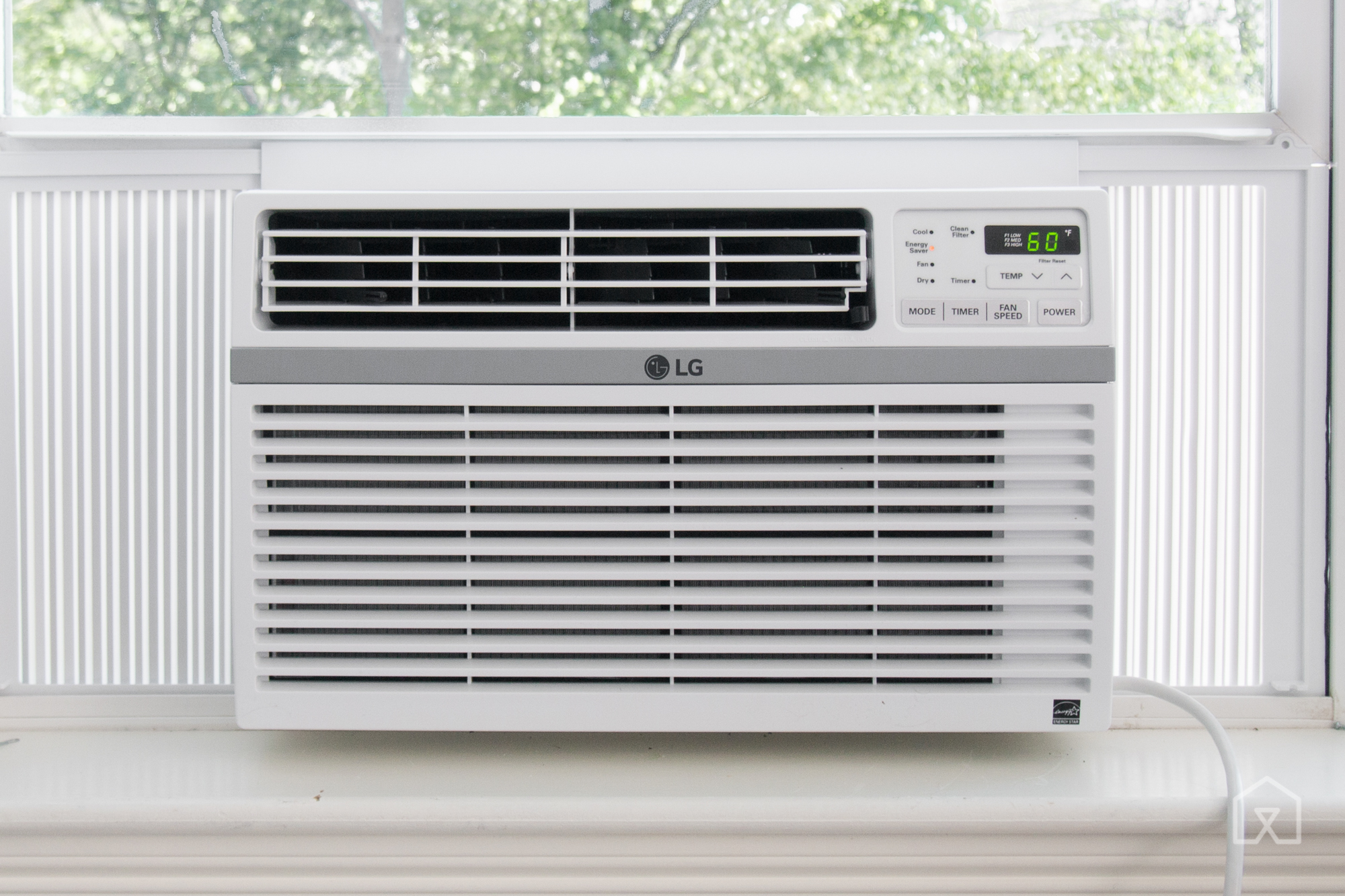 The LG LW8016ER is the best affordable AC for a home office or living area because it's quietish, gives you more control than others, and tends to cost less than its competition. Photo: Liam McCabe

The LG LW8016ER is the window AC you should probably get, especially if it's for an office, den, or other room where you won't be sleeping. Though for some people, it'll be fine in the bedroom, too. Its price is fair, and this model is widely available, so you'll have no trouble running out and grabbing it for a decent price on short notice—for instance, in the middle of a heat wave, like when you're probably reading this article. Compared with other ACs at this price, it's quieter and hums along at a lower pitch, so it's easier on the ears. And though AC controls aren't rocket science, this one offers a greater level of flexibility in total than most of its competitors, covering all the little details—from the fan's directional controls and outdoor-air vent to the dehumidifier mode and removable drain plug.

Affordable, available, and a bit loud 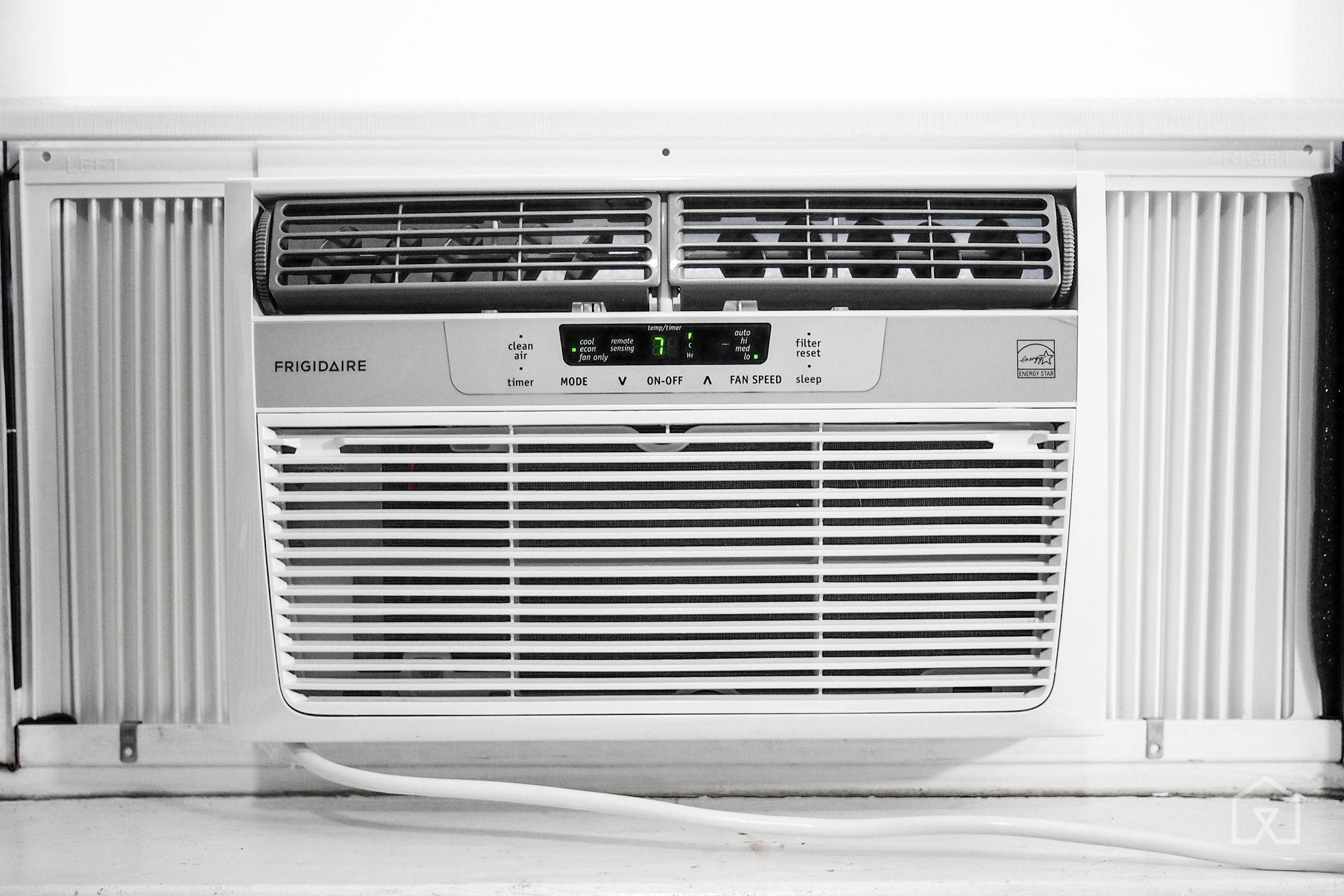 A close look at the fan blades on the Frigidaire—our previous pick—a solid window unit that's a bit loud compared with the units we've found this year. Photo: Liam McCabe

If our main pick is sold out, grab the Frigidaire FFRE0833S1, our former top pick in this guide. It's a little bit louder and higher-pitched than our new pick, but it's an equally capable performer that's usually around the same price. The Frigidaire is also a little bit easier to install because it's smaller and lighter. 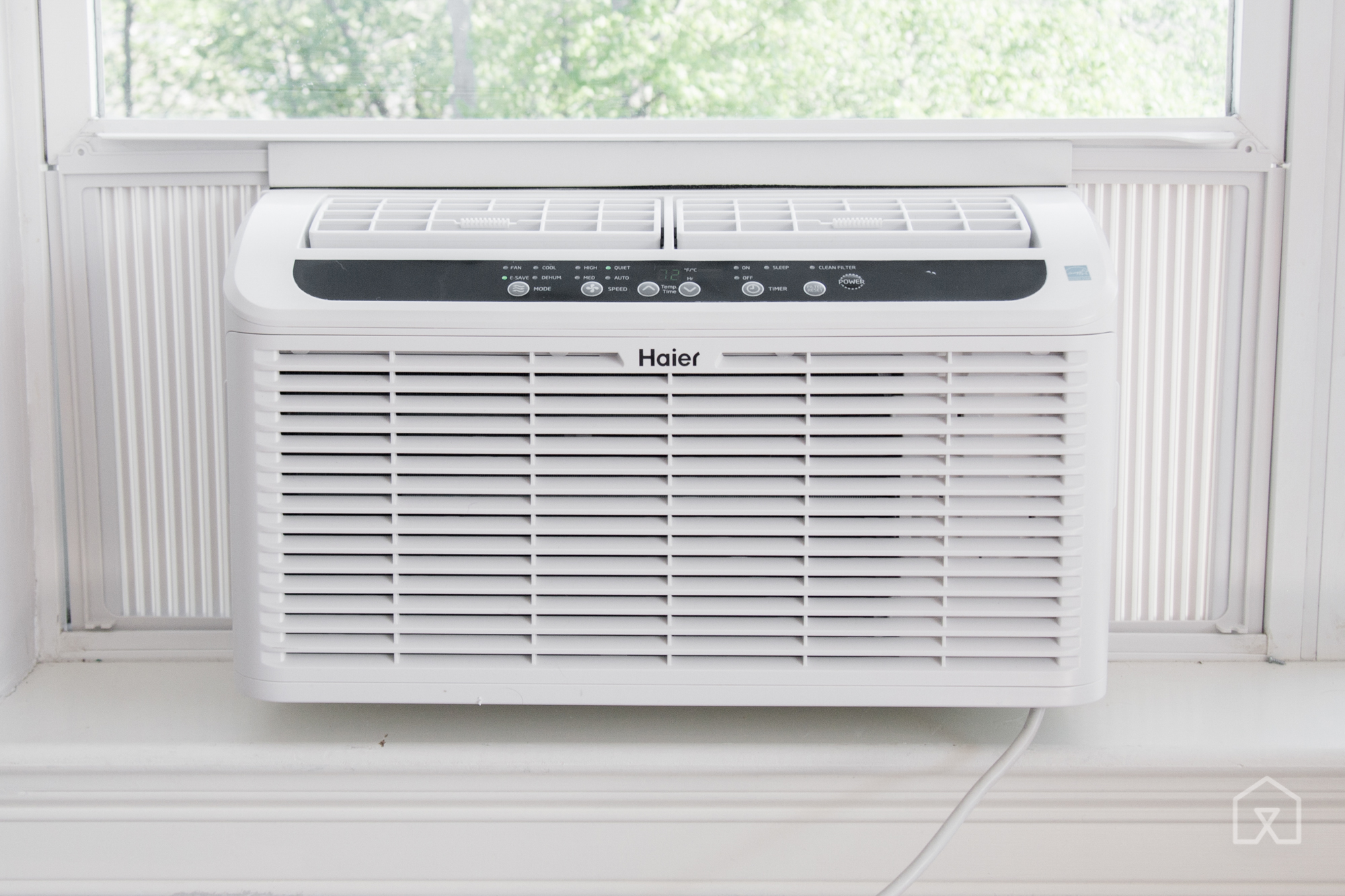 The Haier Serenity Series ESAQ408P is a great AC for a bedroom because it's much quieter than its competitors. Photo: Liam McCabe

If you're installing an air conditioner in your bedroom, or you just value peace and quiet in any other room, treat yourself to the (relatively) hushed performance of the Haier Serenity Series ESAQ408P. It gets quieter than any other window air conditioner we tested, offers tons of control, and is relatively easy to install.

If you need a portable 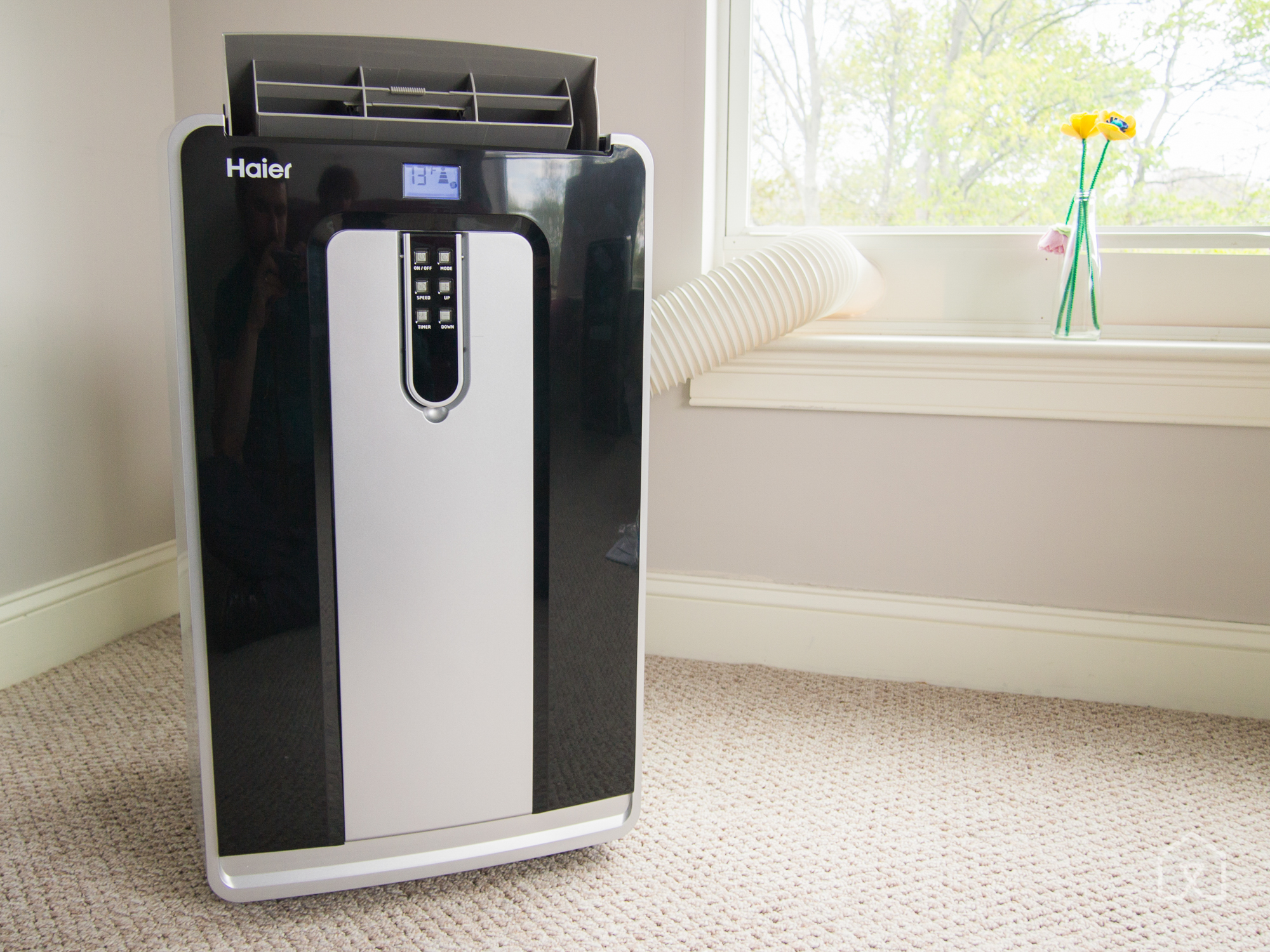 The Haier HPN12XCM is the least-worst portable air conditioner we tested. It runs quieter, rolls around easier, and looks better. Photo: Liam McCabe

Though a window (or wall) air conditioner is almost always a more effective, efficient way to control a room's climate, sometimes a portable is the only kind of AC that fits your space. So if you need one, we think that the Haier HPN12XCM is the best portable air conditioner for most people. It offers the best combination of cooling comfort, intuitive control, portability, and quiet operation among its competitors.

If the Haier is sold out or its price jumps, the LG LP1215GXR is a good alternative.

The right air conditioner size for you

Measure the square footage of the room you need to cool, then look at this Energy Star chart to find the appropriate cooling capacity, as measured in British thermal units (Btu). For most people, it's as simple as that. You won't always be able to find an AC with the perfect Btu rating, so you might have to round up. For example, nobody makes a 9,000-Btu window AC, so a 10,000-Btu window AC is the next-best option in that case.

Don't fall into the trap of buying a significantly under- or overpowered air conditioner. Smaller units cost less, so you may be tempted to size down if you're looking to save a few bucks. But an underpowered AC will run constantly, trying and failing to get the room down to the target temperature and a comfortable humidity. If you get a unit that's too big, it can leave your room feeling clammy because it reduces temperature faster than it removes moisture from the air.

Need to cool multiple rooms? It's more effective to get several smaller air conditioners and put one in each room than to buy one big unit. Sure, you'll have to spend more money to buy two 6,000-Btu ACs than you would to buy a single 12,000-Btu AC. But you'll get much more accurate, comfortable climate control when you use the right machine for each room.

In this article: airconditoner, frigidaire, gadgetry, gadgets, gear, haier, home, lg, lglw8016er, partner, sweethome, syndicated
All products recommended by Engadget are selected by our editorial team, independent of our parent company. Some of our stories include affiliate links. If you buy something through one of these links, we may earn an affiliate commission.