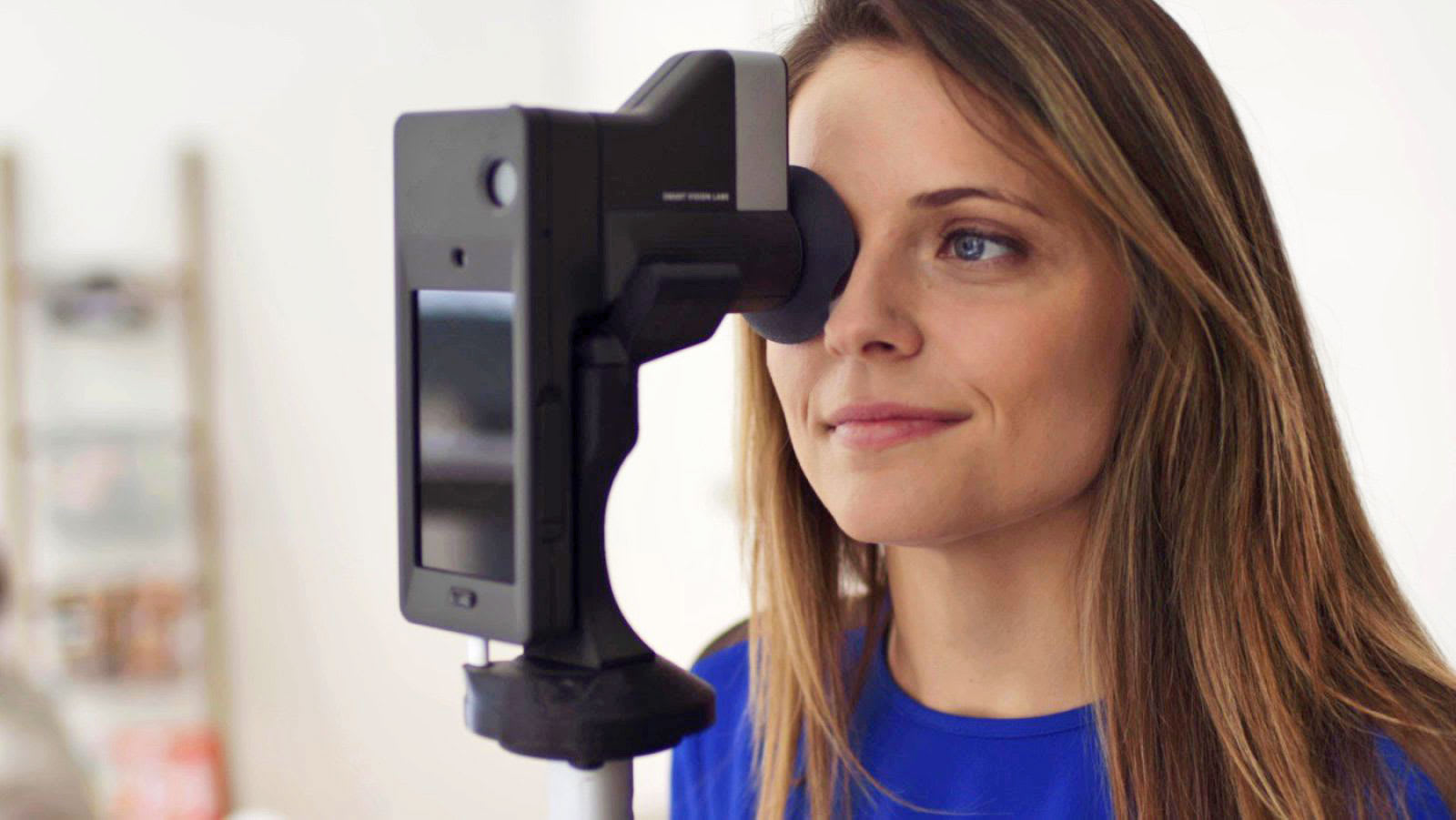 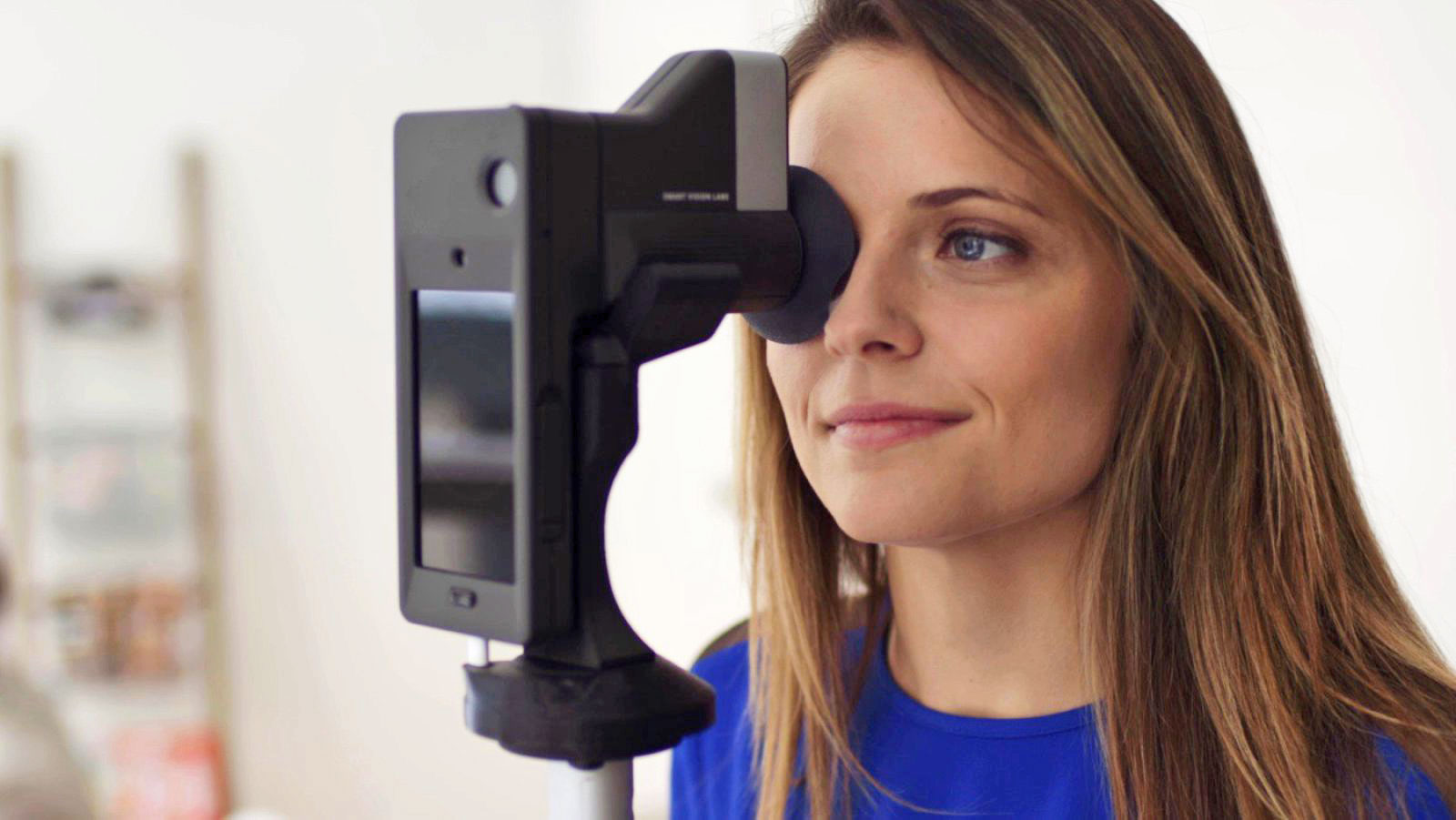 There are dozens of inexpensive ways to buy glasses online today, but getting a new eyeglass prescription is as old-school as ever: Book an appointment with your eye doctor, spend more time than you expect in the waiting room and go through a full exam. Even if you're lucky enough to book through Zocdoc, it's still a long process. Smart Vision Labs hopes to make it easier to get a new glasses prescription with the SVOne Enterprise, a smartphone-powered self-guided vision test that's launching in some New York City glasses stores today. It may not have the catchiest name, but the SVOne Enterprise could be a huge boon for the vision impaired. It's based on the same autorefraction technology as the company's first product, the handheld SVOne Pro, which lets doctors perform eye exams just about anywhere. In a nutshell, the tech involves bouncing a laser off of your retina, which is then measured by the device. The new product adds a telemedicine element: After going through the vision test, the results are sent to a remote eye doctor who approves the final prescription. You can then download the prescription at any time and take it to the glasses retailer of your choice.

The SVOne Enterprise looks like an iPhone with a specialized eyepiece on top of a tripod. It's more functional than attractive, the sort of thing an optical store can leave in a corner until it needs to test a customer. Since only a few stores can afford to have actual doctors on staff, most are left pointing customers elsewhere to get new prescriptions. Smart Vision Labs' device allows stores to keep those customers in-house, so they'll be more likely to buy a pair of glasses. The company chargers its partners $40 a test, but it's up to the individual stores to determine pricing for shoppers.

Founder Yaopeng Zhou says he was inspired to create the SVOne Enterprise after realizing there are almost 200 million people in America who need glasses, but only 106 million eye exams take place every year. He also points out there's only one eye doctor for every 5,000 people in the US. There's a definite need for a faster way to perform vision tests.

To be clear, the SVOne Enterprise isn't a completely self-service product. You'll still need a bit of help to step through the exam, though it's still far less involved than going to the doctor. To start, I answered a few questions on the SVOne Enterprise's iPhone screen about my age and pre-existing eye conditions. If I had any major eye problems, the app would direct me to take a full exam from a doctor.

After that, Yaopeng had me read from a fairly standard vision chart on the SVOne Enterprise's iPhone screen using my glasses. I then placed my right eye in the device's eyepiece and stared at a red laser as it took three photos. I repeated the same process with my left eye, but it took a few tries and a move to a darkened room for it to make a successful measurement. (Yaopeng noted that my pupils were smaller than most, so we had to dilate them a bit by moving to a dark environment.) 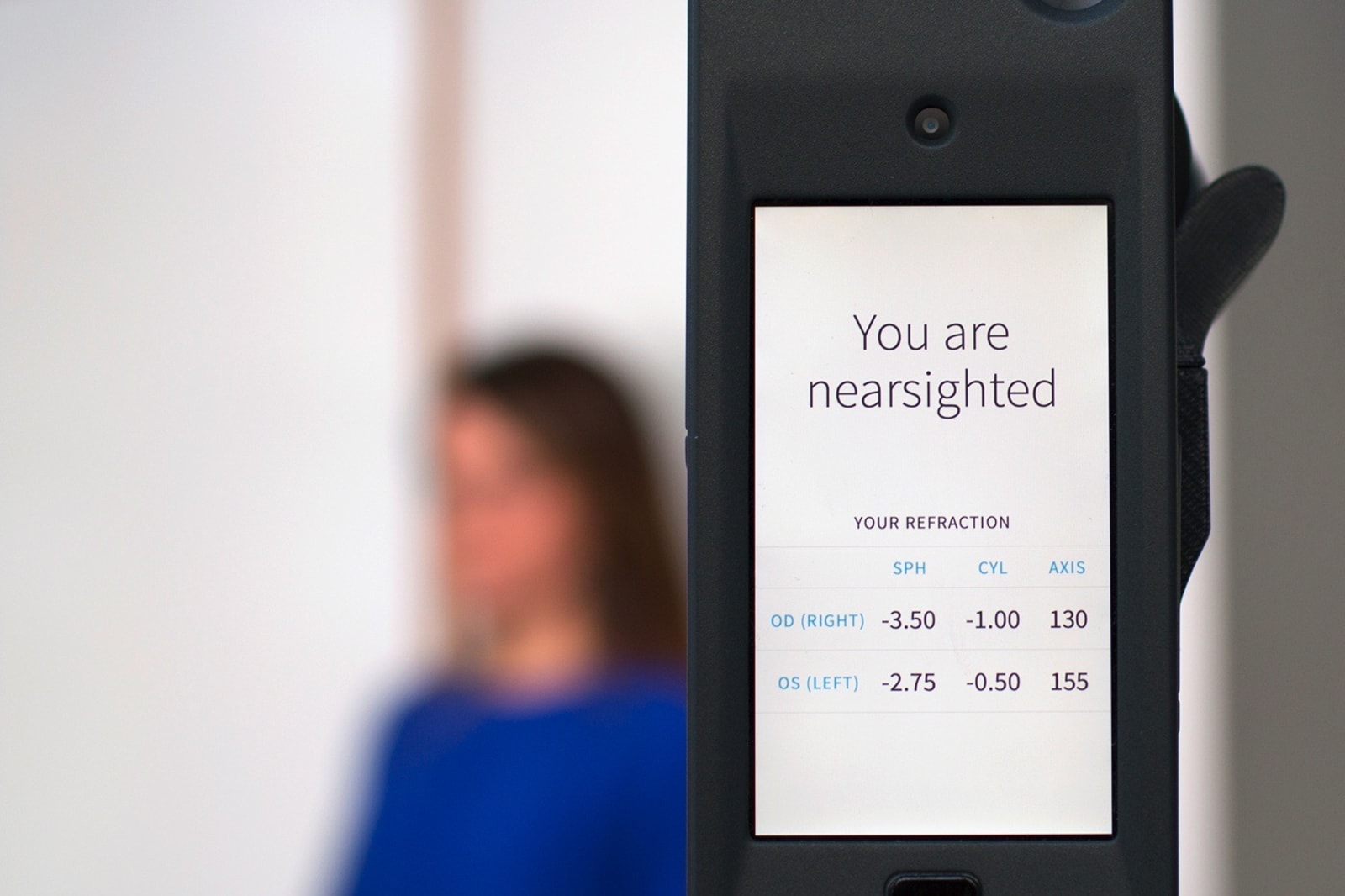 A day after the exam, I received a link to an official prescription from one of the company's contracted doctors. Surprisingly, they didn't make any changes to my current prescription, which is hopefully a sign that my terrible vision is stabilizing a bit. I can now take that prescription to an online eyeglass outfit like Warby Parker, or a local store in my neighborhood, to get a new pair of frames. (If you've only ever gotten new glasses directly from your doctor, it's definitely worth exploring the wealth of new options out there.)

Smart Vision Labs isn't the first company to pursue phone-powered eye exams. Blink claimed it would send someone to your home for an exam (it hasn't launched yet). And Peek has been trying to bring vision tests to the developing world for years. But the SVOne Enterprise is the first product I've seen that delivers a valid prescription just as accurate as my current one.

Looking ahead, Yaopeng says the company is attempting to bring the SVOne Enterprise to more markets in the US. Smart Vision Labs' handheld product is already available in 23 countries. Though it's only sold around 500 units of that device, they've already completed more than 40,000 refraction eye tests over the past few years.

In this article: gear, glasses, medicine, science, SmartVisionLabs, SVOneEnterprise, visiontest
All products recommended by Engadget are selected by our editorial team, independent of our parent company. Some of our stories include affiliate links. If you buy something through one of these links, we may earn an affiliate commission.