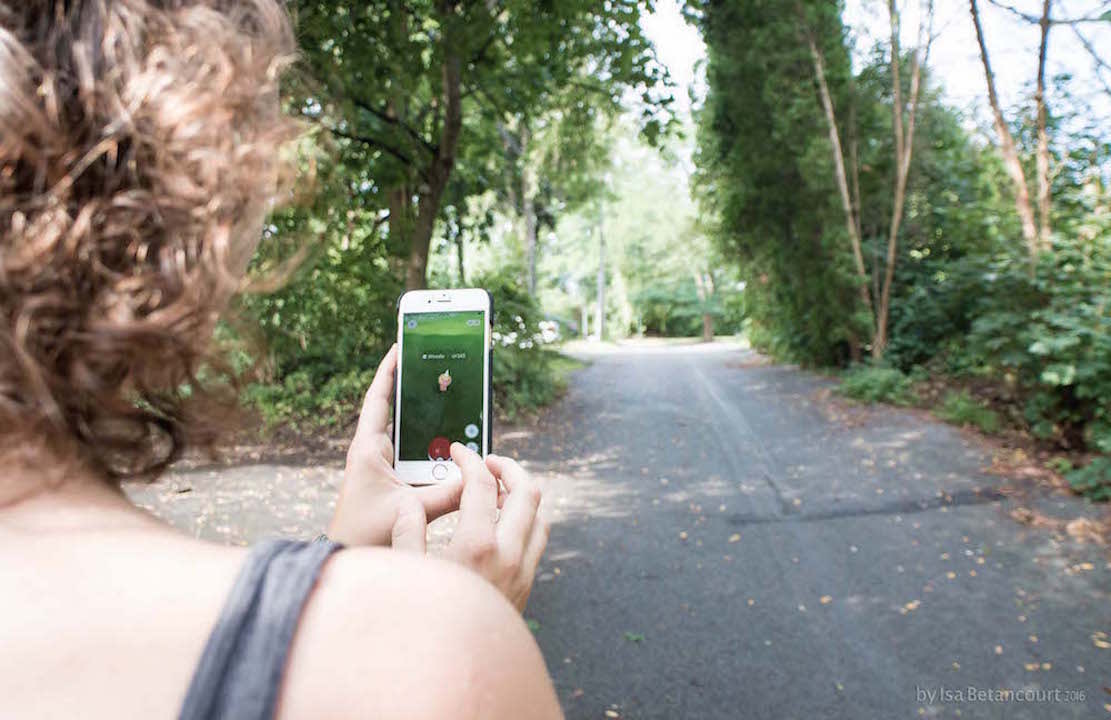 Pokémon Go is essentially taking over the free world. With a following that has outnumbered Twitter users and more downloads than Tinder, Pokémon Go is a smash hit. The game has been downloaded more than 75 million times, according to the latest stats from SensorTower. If you live anywhere that the game has officially launched, or even in a lot of places that it hasn't, you can't walk down the street without seeing Pokémon trainers with their eyes stuck on their mobile device, trying to catch a Cubone or battling an Ivysaur at the local gym.

But while you're hatching a Sandshrew or catching a Pidgey, the game's creator, Niantic, is catching a lot of information about you. As you stalk your Pokémon prey, Niantic can see and save where you go, when you went there, how you got there, how long you stayed, and who else was there.

Even after it fixed the not-so-tiny glitch that allowed the company to access your entire Google account without explicitly notifying you, Niantic may still collect your email address, IP address, the web page you were using before logging into Pokémon Go, your username, and your location according to the Pokémon Go privacy policy.

This isn't that unusual for a mobile phone app, but with Pokémon Go's detailed, street-by-street map and its incredible growth rate, the information compiled could become the most detailed location-based social graph ever collected. It has the power to define an entire user group, predict behavior, and even influence location migration.

With that great amount of location data and insight comes great responsibility, and we have to wonder what Niantic plans do with it.

Cost Per Visit to Pokestops

Niantic announced shortly after the fame of Pokémon Go exploded, that the company would soon host a sponsored locations product, one designed only to charge advertisers only when consumers, as a result of the Pokémon search, end up at their stores.

Essentially, retailers can pay-per-visit for a sponsored location and the Pokémon Go app will lead consumers to the retailer, restaurant, or grocery store via "pokestops" and the opportunity to catch Pokémon within the location. The pokestop becomes an in-game billboard for the business sponsoring it.

This begins to answer questions about how Niantic plans to monetize the game. Users can purchase virtual items on the game, but if Niantic and the Pokémon Co. plan to optimize profit on the game and live up to Nintendo's $12 billion increase in public value since its launch, they likely have a bigger plan up their sleeve.

We can see the potential value of this model as many US retailers have already experienced a massive increase in footfall due to the accidental placement of pokestops in or near their stores. Restaurants have started to capitalize on this, offering special deals to Pokémon trainers that show up in search of the beasts.

Footfall traffic is an increasingly valuable asset to brick-and-mortar locations as they compete against their online counterparts, and location-based advertising opportunities will be an important tool in their success. With that in mind, sponsored pokestops is no doubt an intriguing concept for advertisers and a capital use of the game's location capabilities.

Per the Pokémon privacy policy, we can assume that Niantic also plans to share with and potentially sell the location information collected to third parties. The policy explicitly states that the company can share any information collected with third-party service providers and third parties to conduct "research, and analysis, demographic profiling, and other similar purposes." This includes, at the very least, The Pokémon Company, Nintendo, and Google.

If Niantic decides to sell the information to third parties, it will no doubt make a pretty penny from the sales. A collection of data from a user base as large as Pokémon Go is a gold mine of audience insight for marketers and advertisers, one they can use for advertising within the Pokémon Go environment as well as a manner of other ways as well.

The big question we have to ask is, is this a good thing? With user's growing more and more concerned about privacy (91% only ever giving the minimum amount of personal information required due to security concerns according to a report by Ofcom) surely they would recoil from this tracking. However, users must enter into these arrangements with their eyes open to the exchange that is going on here, developing a game is not free, and the new servers being rolled out to deal with the increased user base aren't free, in-app purchases alone will not cover these costs and provide the revenue a global company demands for ongoing development. User information from the game can be used to target players with highly relevant advertising through Google's AdWords and other third party services. After playing Pokemon, they may find they are receiving more ads that are actually useful and relevant to them, as location data can be one of the most useful types of data when it comes to personalized targeted advertising. And what do users get from this trade? A world filled with Pokemon!

The biggest benefit to Niantic is no doubt the ability to use the massive database to profile its users and further develop not only the Pokémon Go brand but other games and products that the company and partners have in the works.

The app has been downloaded more than 75 million times and nearly 3% of the entire U.S. are daily active users. With a pool of users that large and that active along with the information that Niantic can retrieve from those users, the company can define their users to a "T" to produce some of the most accurate demographic profiling on the market.

This research and analysis will give Niantic the behavioral insight it needs to enhance the Pokémon Go experience and regardless of what detractors will say, this is likely to be a primary use for the data. Niantic has launched a game that has captured a cross-generational audience, who are more than happy to have an excuse to get outside. Yet, to maintain this audience they will need to create new ways of interacting with the world, new gameplay modes, and new activities to keep people engaged especially through the winter months. The location data they collect and the contextualized information that this provides could be vital to this process, as it can tell them the demographics of their users and what is important to them. Simply put, Niantic feeds you a Razz Berry, catches you with one Pokeball and adds you to its Pokedex, so it can see your stats and what you need to evolve.

What we have here is the first large scale, wildly popular gamification of location data, with broad appeal across generations. This data will be vital to Niantic, for both building the future of the game and for generating revenue. It may also benefit users who find they are receiving better and more relevant advertising messages, and who get the game for free.

Of course, with large scale location data like this, concerns will arise about how the data is stored, where, and for how long. It's a valid concern, and one that Niantic should be willing to address with users.

Can you imagine the potential hack in which all of this location data ends up in the wrong hands, tied to each user's login or phone number? We can expect that Niantic has gone through a series of measures to ensure that this infinitely valuable information remains protected, but it would be nice to know what some of those measures are.

The Electronic Privacy Information Center, a nonprofit, public interest research group that aims to protect consumer privacy, recently asked the Federal Trade Commission to launch an investigation on Niantic's practices. The organization is urging the FTC to create definitive limits to the amount of information that Niantic collects and how long it stores that information, also making the claim that as the nature of the game attracts a wide age group, Niantic may also be illegally collecting data from school age children. Location data services provider InMobi was recently fined by the FTC for a similar violation.

These claims, while unconfirmed, are a testament to why Niantic needs to make it clear to users and the world how it's storing, tracking and using gamer data. Location tracking and user data mining in themselves are not unusual or malevolent, but it's important that companies doing so are explicit and upfront about it.

With 47% of Americans stating that they are not confident in understanding how their personal data is used, according to Pew Research, it's important that users know what they are getting into when they decide to start training to become a Pokémon master. The data they share is up for grabs, and both the game's creators and users must agree to make this consent clear.