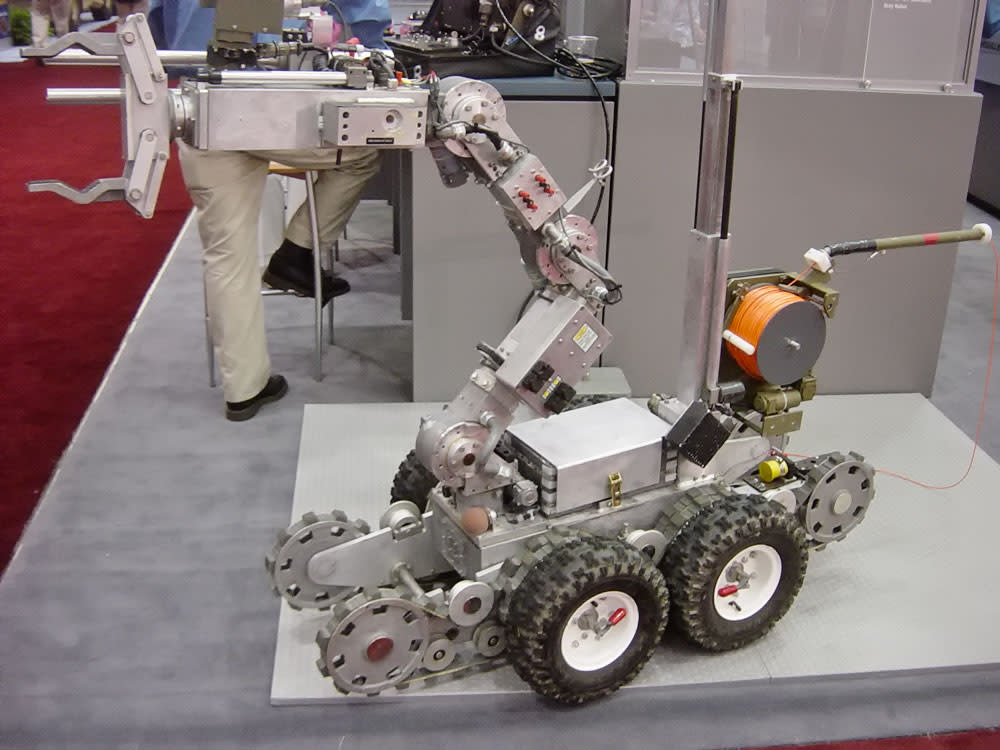 Last week, on September 8th, the Los Angeles County Sheriff's department successfully used a remote-controlled bomb squad robot to snatch a rifle out from under an armed and violent suspect. The standoff between the suspect and an armored SWAT team lasted for more than six hours, but concluded without a single shot fired. "The robot was a game changer here," Capt. Jack Ewell told the LA Times. "We didn't have to risk a deputy's life to disarm a very violent man."

According to the Times, the whole thing began with sheriff's deputies in Lancaster, CA in pursuit of 51-year-old Brock Ray Bunge, suspected of robbing two people and attempting to kill another. A police helicopter tracked Bunge until he holed up behind a dirt bank covered by shrubs and wire fencing, where he stayed for six hours while SWAT teams stood by. When he refused to surrender, deputies sent in the robot for a closer look and noticed Bunge's rifle was laying at his feet. From the Times:

To seize the firearm, they hatched a plan that relied on distractions. Deputies in an armored vehicle approached to the front of Bunge, yelling at him through a public address system to surrender. A helicopter whirred overhead.

From behind, the olive-colored robot approached and extended its claw into Bunge's hideout.

"The robot was able to move up and grab the gun without him noticing," Ewell said. "He never knew it happened."

The robot's operators managed to snatch the gun away simply by putting the robot in reverse and backing away. The suspect only notice his rifle was missing when the bomb robot was sent back to remove the wire fencing, at which point Bunge immediately surrendered.

While this particular standoff ended without any additional violence, that hasn't always been the case in the past. Back in July, police in Dallas armed a similar ANDROS bomb-disposal robot with an explosive device they used to kill a suspect who was accused of murdering five police officers and injuring seven others. That case appeared to mark the first time time in US history that authorities used a drone or robot to kill a citizen. On the other hand, in 2015, negotiators in San Diego literally talked a man with a knife down off of a ledge by sending in a bomb robot to deliver him a pizza.

In this article: BombDisposal, bombrobot, culture, militarization, police, politics, robots, security
All products recommended by Engadget are selected by our editorial team, independent of our parent company. Some of our stories include affiliate links. If you buy something through one of these links, we may earn an affiliate commission.