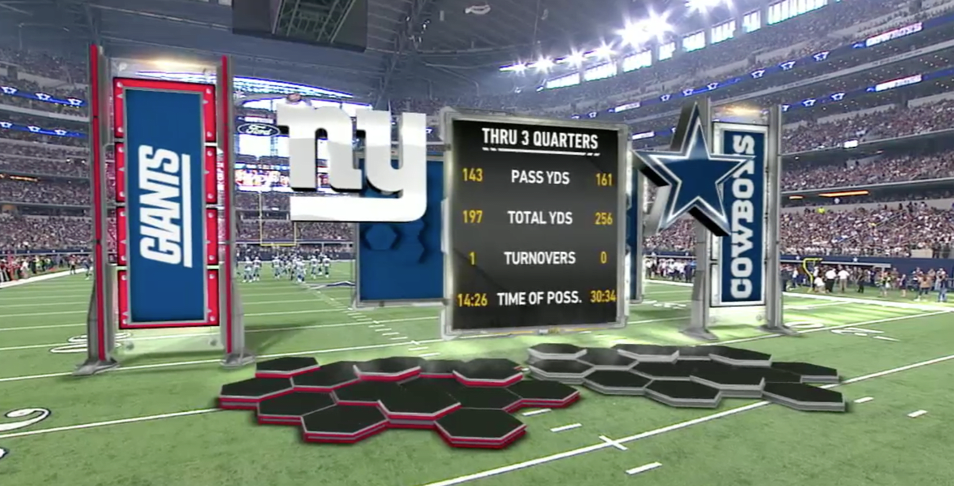 As a tech nerd and a New York Giants fan, I couldn't help but geek out during the recent Giants-Cowboys game. Fox Sports debuted a new kind of augmented-reality graphics package that placed a massively tall scoreboard on the field in 3D and then later added a larger-than-life quarterback comparison.

As the aerial Skycam moved forward, the perspective changed as I watched my TV, allowing me to peek around the side of a digital Eli Manning and then literally move through the graphics to see the live action. I've never seen anything like it before, because it had never been done before.

According to Michael Davies, senior vice president of field and technical operations for Fox Sports, this is just the beginning of what's possible with AR graphics. And the source of his and his team's inspiration is clear.

MORE: How to Get Sunday Ticket Without DirecTV

The key to the new AR graphics package is the Skycam, which provides the quintessential video-game-like view that's piloted above the field and sits right behind the play. Last year, Fox Sports used the Skycam to debut a virtual 1st-and-10 line from above, and now it's working with three vendors — Skycam, Sportvision and Vizrt — to show other types of augmented reality and 3D graphics on the field.

It took a fair amount of research; but it's good, and I think it's getting better," Davies said.

The Skycam gives Fox Sports the data on where the camera is and what it's doing. The second ingredient is Sportvision, which provides optical tracking info and synthesizes the information coming from the Skycam. Vizrt, the third ingredient, is the graphics engine that renders and produces the 3D graphics, which takes into account not only the position of the camera but also lens zoom and lens distortion.

So far, the response from fans has been fairly positive, partly because Fox Sports is very cognizant of the line between attention-grabbing and distracting. "In the past, when you needed to throw up a graphic, it would cover up and almost take you away from the action," Davies said. "This allows us to stay in the field of play and keep the audience connected to the game and still get the information up."

What's next? Davies wants to be able to take the tracking data that Fox Sports gets from the Skycam and integrate 3D graphics in real time, whether it's for displaying important statistics, analyzing important matchups or dropping a virtual pointer on a player that has just entered the game. Fox Sports might also use its new system to highlight a route.

"To be able to put augmented reality over actual gameplay, or during replays and highlights, is something I think we would really like to get into," Davies said.

Just don't be surprised when advertisers start asking for the AR graphics treatment.

In this article: AR, augmentedreality, av, entertainment, fox, foxsports, partner, syndicated, tomsguide
All products recommended by Engadget are selected by our editorial team, independent of our parent company. Some of our stories include affiliate links. If you buy something through one of these links, we may earn an affiliate commission.