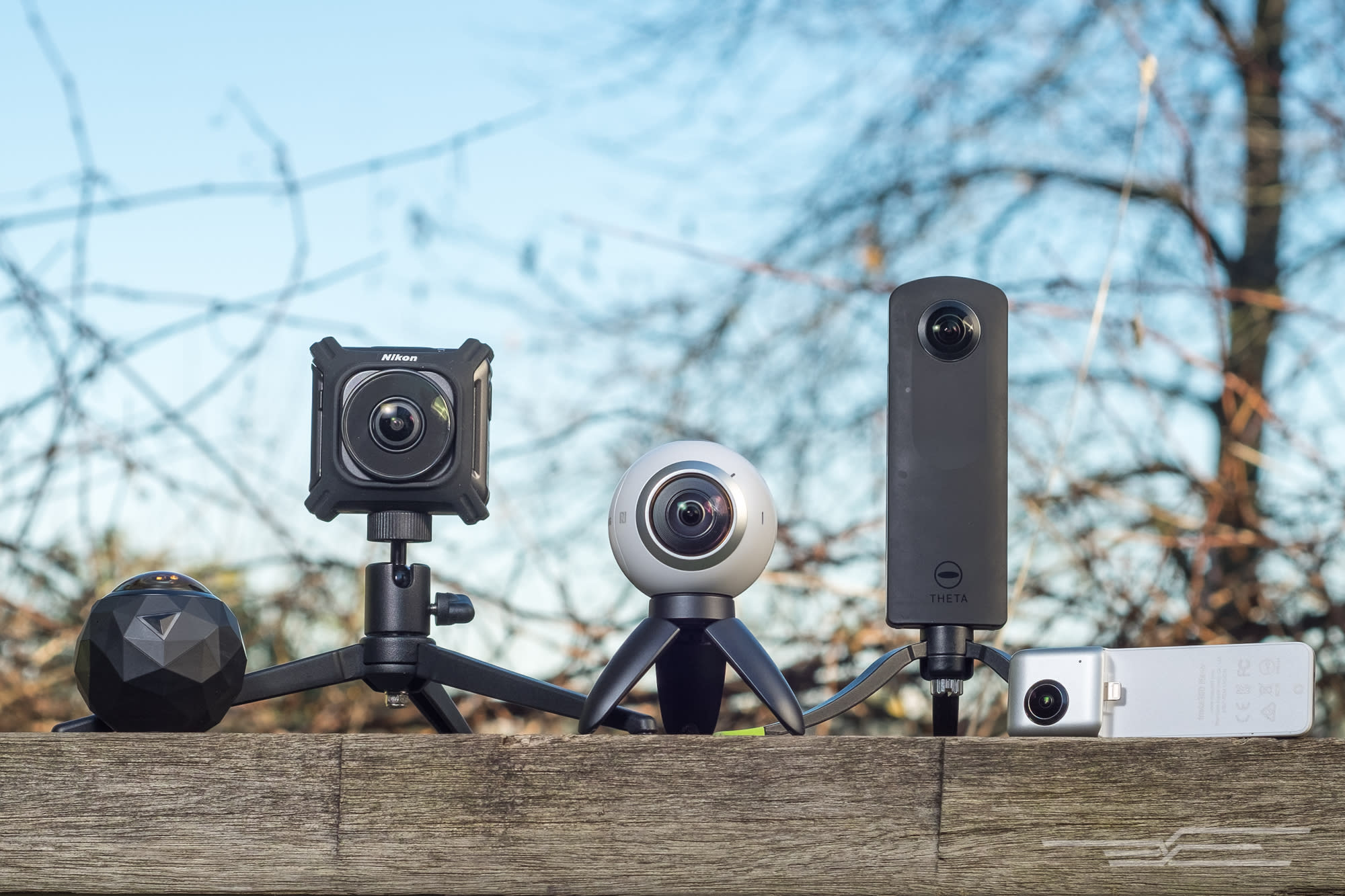 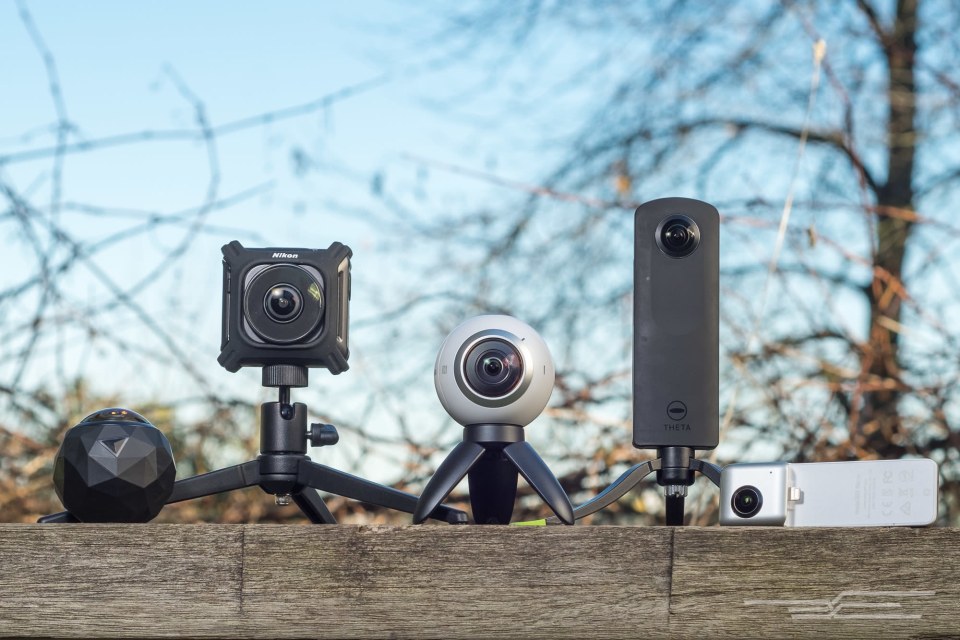 A 360-degree camera is great if you want to capture the full view of the summit on Half Dome or take in all of the surrounding architecture in the Piazza San Marco in Venice and share that experience on Facebook or YouTube so friends can pan around a scene and fully be there in the moment. After researching 360-degree cameras for 30 hours and testing four top contenders, we think the Ricoh Theta S is the best affordable, user-friendly entry point into this rapidly developing new category of photography.

The appeal of 360-degree cameras is the ability for the viewer to see (and often hear) not just what's in front of you, but the entire visual sphere of that location. 360-degree images and videos enable the viewer to look around independently, whether that's by dragging within the picture window in an app or on a computer screen, or by moving their body while holding a phone or tablet that can register its place in 3D space. When you wear an inexpensive pair of Google Cardboard goggles or more advanced VR gear, the experience you record becomes fairly immersive.

Ways to use 360-degree cameras are still evolving, but there are some scenarios that lend themselves to this kind of shooting. 360-degree cameras can function as an action camera, a POV camera, or a mounted camera. For more on these shooting styles, see our full guide. We started by reading reviews and combing through specifications for nearly 30 cameras that offer 360-degree recording capabilities. Based on a reader survey of how much you'd be willing to pay for a 360-degree camera, we then limited our scope to models priced under $600. Working on the assumption that more megapixels would be beneficial, especially when shooting video, we looked closely at 4K-capable models. But because only a small number of them currently exist, we brought in a Ricoh Theta S for testing to see how its HD video differed from 4K footage in real-world usage. We dismissed solutions like the GoPro Omni that require strapping together two or more cameras using novel brackets or cages for 360-degree coverage due to complexity. Ultimately, we were able to limit our contenders to just a handful of models: the Ricoh Theta S, 360fly 4K, Samsung Gear 360, Insta360 Nano, and Nikon's KeyMission 360. For more details on what we dismissed and why, please see the full guide's competition section.

We took the cameras on vacation to Vancouver and Disneyland, and we also used them on everyday excursions in and around Seattle. In addition to testing ease of use and image quality, viewing results on computers, mobile devices, and cardboard VR viewers, we looked at the post-capture process: editing using dedicated apps and sharing to social media platforms like Facebook, YouTube, Flickr, and other outlets that support 360-degree viewing.

Breaking out of that pipeline, however, introduces complications. Editing an image in an external application like Photoshop or cutting together multiple video clips into one movie can remove the metadata that identifies the media as 360 so it displays as a flat image rather than a sphere, necessitating an extra step to reintroduce it. And you can't assume that every outlet knows what to do with the end result. Facebook displays the images correctly, for example, but as of this writing, Facebook-owned Instagram does not. We think the Ricoh Theta S is the best all-around choice for a 360-degree camera. Its two lenses capture a true 360-degree sphere of view with good color fidelity, sharp image quality in still photos, and pleasing video quality (even though it's limited to 1080p resolution). The camera is comfortable in the hand and easy to use on its own, but it can also be controlled from a smartphone app. Editing and sharing clips and photos is an easy-to-understand process, something we couldn't say for some of its rivals. The Theta S was the camera we reached for first when going out to shoot footage.

The Theta S uses two 12-megapixel sensors paired with ultrawide 240-degree lenses in order to create 360-degree footage along both horizontal and vertical axes. It grabs nearly all of that imagery—hiding only the camera itself—and splices the captures from each lens into one seamless 14-megapixel image or 1080p video. The result is technically still a flat image, but when viewed in the Theta S app, or in some outlets such as Facebook, YouTube, and Flickr, the effect can feel like you're standing where the photographer stood. Why look out over just one vista when you can see every view from the top of a mountain? To avoid the need for stitching multiple images together, the makers of the 360fly 4K went with a different approach. The camera has just one lens, capturing a 240-degree vertical view and a 360-degree horizontal view. Because it captures that view in 4K resolution, it offers sharper footage with greater detail than our top pick. The images are still treated as full 360-degree scenes, and because it uses just the one lens, there's no stitching where two images are joined together—but there's a blind spot under the camera, replaced by a black or faux-reflected area. The practical effect, when viewing the footage, is feeling as if you're being prevented from looking down (or up, depending on the camera's orientation). The Samsung Gear 360 excels in all the areas we determined were important for 360-degree cameras. It has good image fidelity and shoots video at 4K. Its physical design is compact and feels good in hand (with its included mini tripod that doubles as a handle), with the best external controls of any of the cameras we tested. And working with the images after you've shot them in the Samsung Gear app is easy and straightforward. But it's fully compatible with only a limited range of Samsung phones, which prevents us from making it a top pick. Samsung recently announced a second-generation Gear 360 that the company says will be compatible with a wider range of devices.

Like the Theta S, the Gear 360 captures a full 360-degree sphere around the camera using two lenses, and it does so at 4K resolution (up to 3840×1920 pixels). Still photos are shot at 7776×3888 pixels when both images are combined; you can also choose to shoot using just one lens. Image quality is very good, although the lens distortion appears exaggerated when viewing it within the Gear 360 app; it looks fine when shared to Facebook or YouTube, however.

Samsung has announced, but has yet to make available, the 2017 model of the Gear 360. The new version has a redesigned form factor, shoots 4K video, offers live streaming ability, and should work better with iOS devices. We're looking forward to testing it when we can.

In this article: 360fly, 360fly4k, cameras, gear, gear360, partner, ricoh, ricohthetas, samsung, samsunggear360, syndicated, thetas, thewirecutter, wirecutter
All products recommended by Engadget are selected by our editorial team, independent of our parent company. Some of our stories include affiliate links. If you buy something through one of these links, we may earn an affiliate commission.