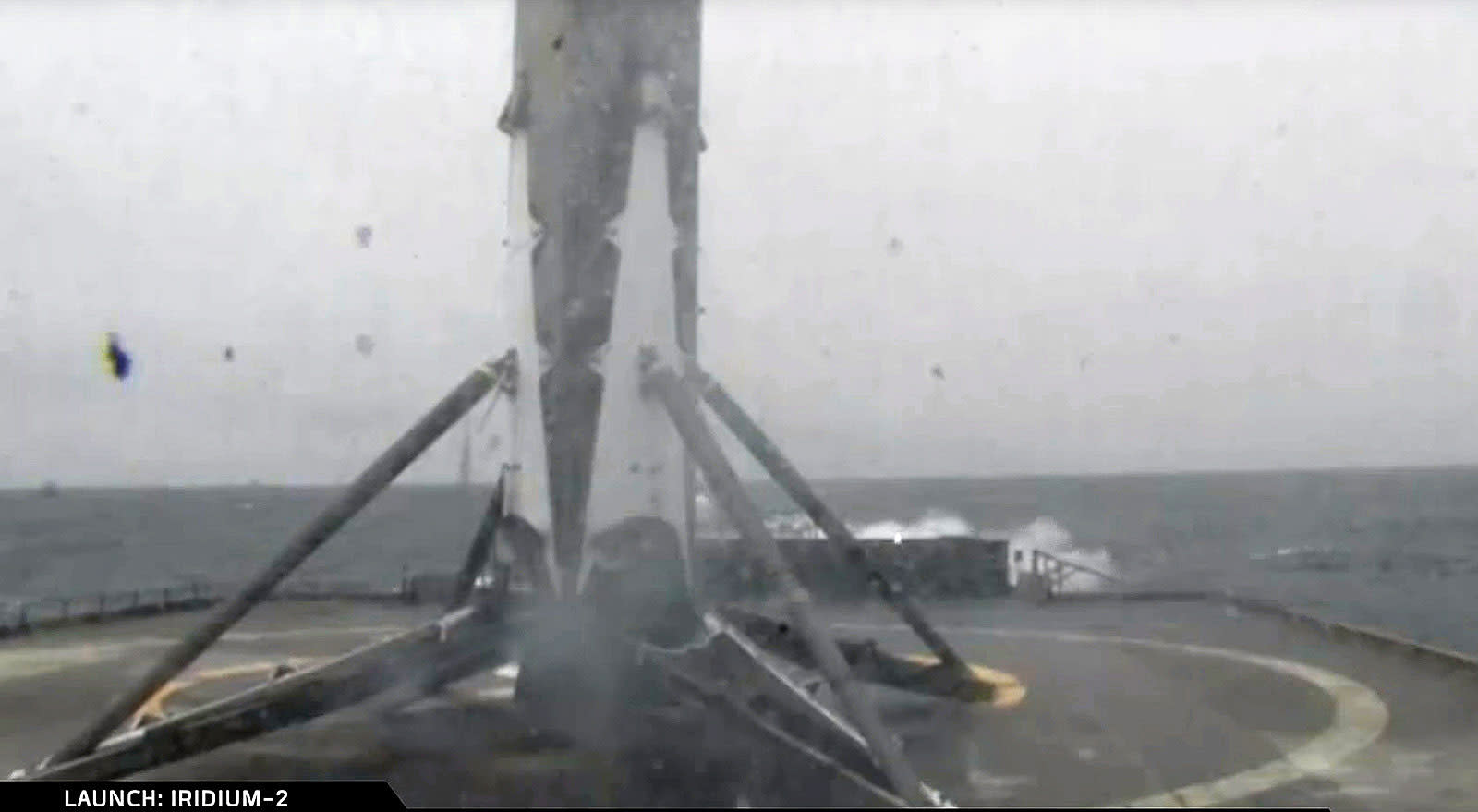 SpaceX's technical problems that caused an explosion last September seem well behind it, as it pulled off the rare feat of launching two rockets this weekend. On Friday, the Falcon 9 lofted a Bulgarian communications satellite into orbit from Florida's Kennedy Space Center, landing the recycled first stage at sea. On Sunday, it pulled off the trick again, sending ten Iridium-2 satellites into orbit from Vandenberg Air Force Base in California. Once again, it brought the first stage safely back to drone ship "Just Read the Instructions" despite visibly rough weather and rolling seas.

The landing was impressively free of drama, despite the fact that you can see the barge pitching and whitecaps breaking against it. SpaceX CEO Elon Musk said that the drone ship had to be repositioned due to "extreme weather" and warned that launch and landing "will be tight" (see the full video, below).

Musk pointed out new titanium grid fins used to aerodynamically maneuver the Falcon 9's first stage for the Iridium launch. Clearly visible in the landing video, they're made of "a single piece of cast and cut titanium ... [and] can take reentry heat with no shielding," he tweeted.

Iridium might be best remembered as the company behind a failed space internet and cellphone calling scheme. In 2007, it rebooted the network as "Iridium Next" with an 81-satellite constellation, 75 of which will be launched by SpaceX. The aim is to "provide services for aviation, maritime, internet of things, terrestrial and government organizations," says SpaceX.

The two launches are the closest together yet for SpaceX. The launch of the Bulgarian satellite and recovery of the first stage marked just the second time SpaceX has used (and recovered) a recycled first stage. Interestingly, the same rocket launched the first batch of 10 Iridium satellites in its virgin debut.

All of that is a good sign for SpaceX, which wants to really amp up the pace of rocket launches. Key to reducing time and cost are the first stage recoveries, and so far, SpaceX has done those successfully 13 times, including eight at sea. The last time a landing failed was a year ago, but that was already a risky attempt following a high-orbit satellite launch. Soon, SpaceX plans to launch rockets every two weeks, a blistering pace that may make the still-amazing spectacle old hat.

In this article: applenews, ElonMusk, Falcon9, gear, Iridium-2, landing, Launch, space, SpaceX, video
All products recommended by Engadget are selected by our editorial team, independent of our parent company. Some of our stories include affiliate links. If you buy something through one of these links, we may earn an affiliate commission.