Mazda has made the announcement car manufacturers have been working towards for years: it's releasing the first commercial compression-ignition gasoline engine. Dubbed SkyActiv-X, the engine will be available in 2019 and promises up to 20-30% more engine efficiency than the current SkyActiv-G, and up to 45% more than Mazda's 2008 petrol engine.

Current gasoline engines rely on a spark plug to ignite their air-fuel mix. The SkyActiv-X will ignite the air-fuel mix spark-free through compression, like a diesel engine. This, according to the Japanese manufacturer, combines the advantages of petrol and diesel engines to achieve "outstanding" environmental and power performance. 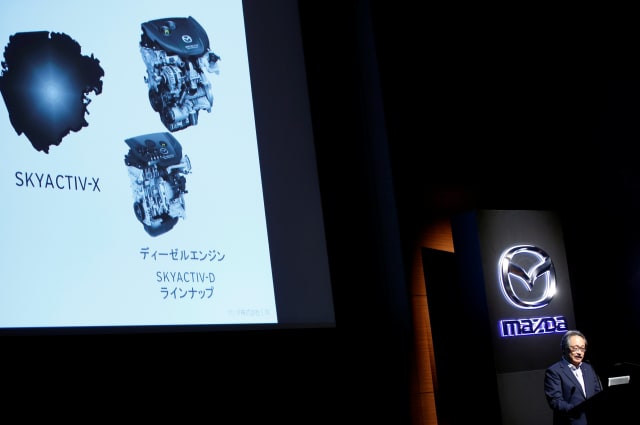 The announcement comes just days after the company laid out its billion-dollar plans to build electric vehicles with Toyota. Speaking to reporters, Mazda's head of R&D Kiyoshi Fujiwara said that while "electrification is necessary ... the internal combustion engine should come first". Electrification and emissions minimization is a major focus of Mazda's Sustainable Zoom-Zoom 2030 plan, and technically SkyActive-X falls into this remit, given its advances in efficiency. But it's still a technology reliant on natural resources. Mazda's electric vehicles and its SkyActiv-X engine take sustainability in very different directions, so it will be interesting to see if, and how, these roads eventually converge.