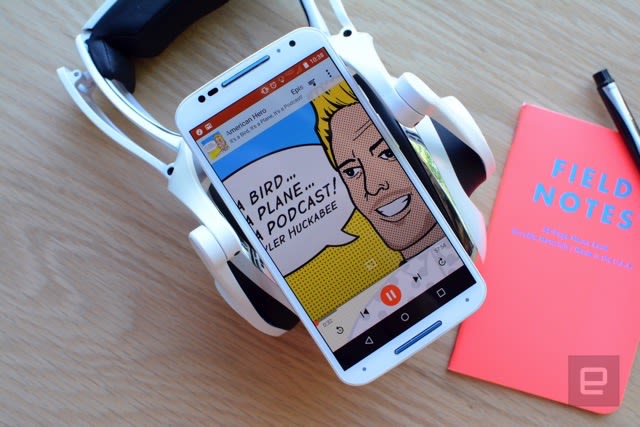 Spotify isn't the only one experimenting with original podcasts. Today, Google is announcing its first exclusive series for Play Music users called City Soundtracks. The concept is similar to the BBC's Desert Island Discs, focusing on individual artists and the people, places and moments that have influenced their lives. The chatter will be punctuated with tracks, picked by the guest, which reflect their hometown and the stories they've chosen to tell. It'll be hosted by Hrishikesh Hirway, the voice behind music podcast Song Exploder and the self-explanatory West Wing Weekly.

Three episodes have been produced, and it's not clear if more are in the works. The first centers on Kelhani and her experiences growing up in Oakland. The second is an exploration of New Orleans, and the musical landmarks which 'Queen of Bounce' Big Freedia holds dear. The final episode revolves around Britt Daniel and Jim Eno, members of the rock band Spoon, as they discuss their favorite venues, recording and writing locations in Austin, Texas. Part playlist, part interview, they should appeal to the fans of each artist and also anyone interested in music culture.

Podcasts are an obvious way for companies like Google to tempt listeners across to their service. Music exclusives are another option -- Apple Music and Tidal have had plenty -- but it's increasingly difficult to lock an artist to one platform. Spotify and others have therefore turned to 'live lounge' performances, podcasts and short-form video shows as a way to differentiate. Google is in an interesting position, however, because Play Music can be used as a streaming service, a music "locker" and a standalone podcast app -- or a mixture of all three. City Soundtracks, then, isn't a play for subscribers, but to simply get more people using the app.

In this article: citysoundtracks, entertainment, google, googleplay, googleplaymusic, playmusic, podcast, podcasting, podcasts, services
All products recommended by Engadget are selected by our editorial team, independent of our parent company. Some of our stories include affiliate links. If you buy something through one of these links, we may earn an affiliate commission.