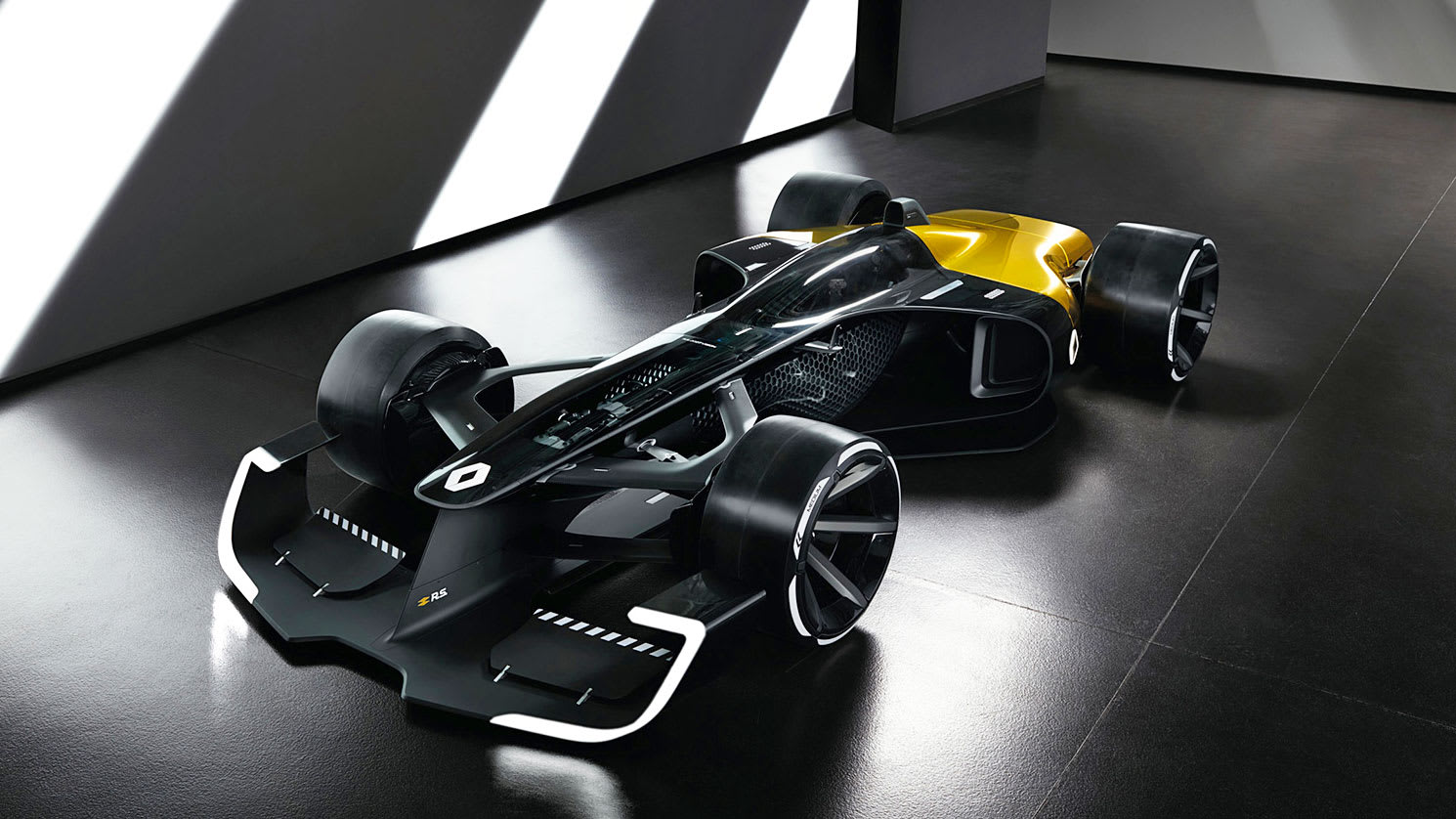 Renault sees more power, less weight, and an increased focus on safety.At this week's Auto Shanghai, French automaker and Formula 1 factory team Renault revealed their idea of Formula 1's future, the R.S. 2027 Vision. It takes the three main focus points of modern Formula 1 development - safety, driver engagement, and entertainment - and distills it into what Renault believes cars may look like in 10 years.

Despite the heavily stylized, futuristic appearance, there's no mistaking the yellow and black R.S. 2027 Vision for anything other than a Renault F1 car. The automaker thinks F1 cars of the future will be far lighter and faster than today's racers. The quoted specs are 1 megawatt of power and a weight of 600 kilos, or just over 1,300 horsepower and 1,300 lbs. Power will still come from a turbocharged hybrid V6. For reference, current F1 cars weight 1,548 lbs and are hovering around 950 horsepower.

The kinetic energy recovery system, or KERS, output would be increased to a total of 500 kW, up from 120 kW in today's cars. The R.S. 2027 Vision would have all all-wheel drive thanks to an electric motor at the front. Current packaging and power issues prevent this on cars today. In addition to sending power to all four wheels, the R.S. 2027 Vision would have four-wheel steering.

A larger battery would allow the cars to drive in pure electric mode during certain parts of the race. It would be needed to save fuel, since the R.S. 2027 Vision only has a 60 kg tank, down from 105 in current cars. The batteries would have roughly the same output as today's Formula E cars.

A transparent canopy covers the cockpit, providing more safety than today's open cars without ruining visibility. The entire cockpit will be 3D-printed to fit around a driver in a way that current cars can't quite match. Renault also envisions a transparent helmet, allowing fans to have a look at their favorite drivers. LED lighting on the wheels will show driver information like track position and energy reserve, similar to that on current Le Mans cars. The wheels themselves will grow from the current 13-inch design.

Other updates would be enhanced electrification, adjustable aero, and even some autonomous modes for safety car periods or driving in the pit lane. The goal would be to reduce accidents like the one that led to the death of Jules Bianchi. Vehicle to vehicle communications would both keep the cars in order during these periods and help drivers know where the competition is on track at all times.

Driver telemetry will be accessible to fans over the internet, providing a level of connection and interaction that some hardcore fans will love. Renault also sees a fan-ranking feature where spectators can vote on social media and provide a boost for certain drivers – a little like what Formula E does now. Races would be shortened and divided into two. The first would be a long race and the second would be a short sprint. There would also be a rookie race to feature reserve drivers from each team.

In an effort to reduce costs, non-performance differentiating components would be supplied from a single source. Additionally, parts like complex hydraulic suspension would be replaced by simpler active suspension that could be used to recover energy. Work on aero would be substantially limited in order to bring down development and wind tunnel costs.

Renault has a long and storied history in Formula 1, both as a factory-backed team and as an engine supplier. In both cases, Renault has won multiple world championships, most recently with a Renault-powered Red Bull in 2013. In its very first year in F1, Renault was the first team to use a turbocharged engine, though it would be a bit before it would take a car to a win. Over the years, Renault introduced technology such as air valves, gear-driven camshafts, and direct fuel injection.

In this article: car, concept, culture, f1, formula 1, formula1, gear, race, racecar, renault, renault f1, renault r.s. 2027 vision, rs2027vision, transportation
All products recommended by Engadget are selected by our editorial team, independent of our parent company. Some of our stories include affiliate links. If you buy something through one of these links, we may earn an affiliate commission.