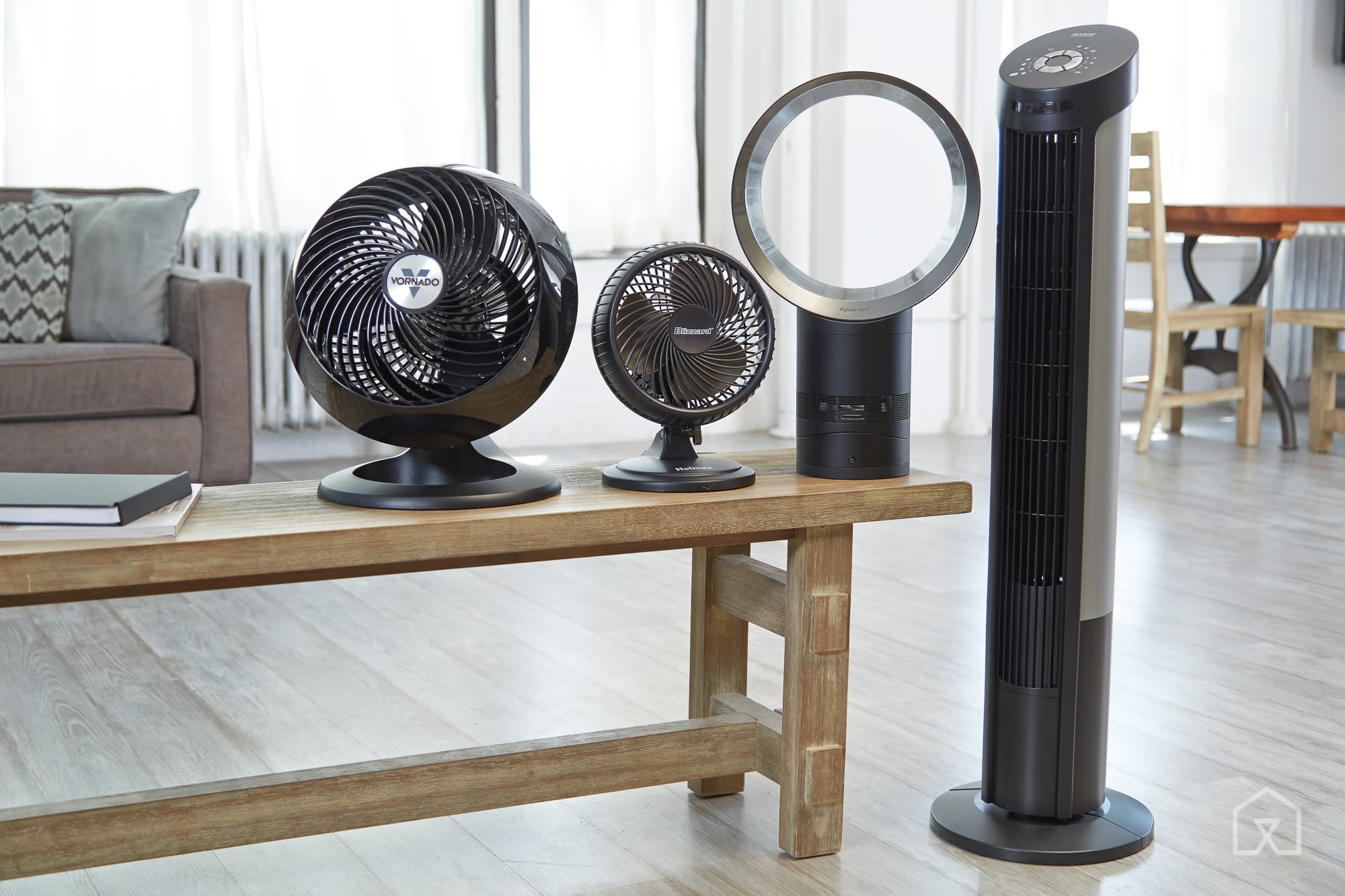 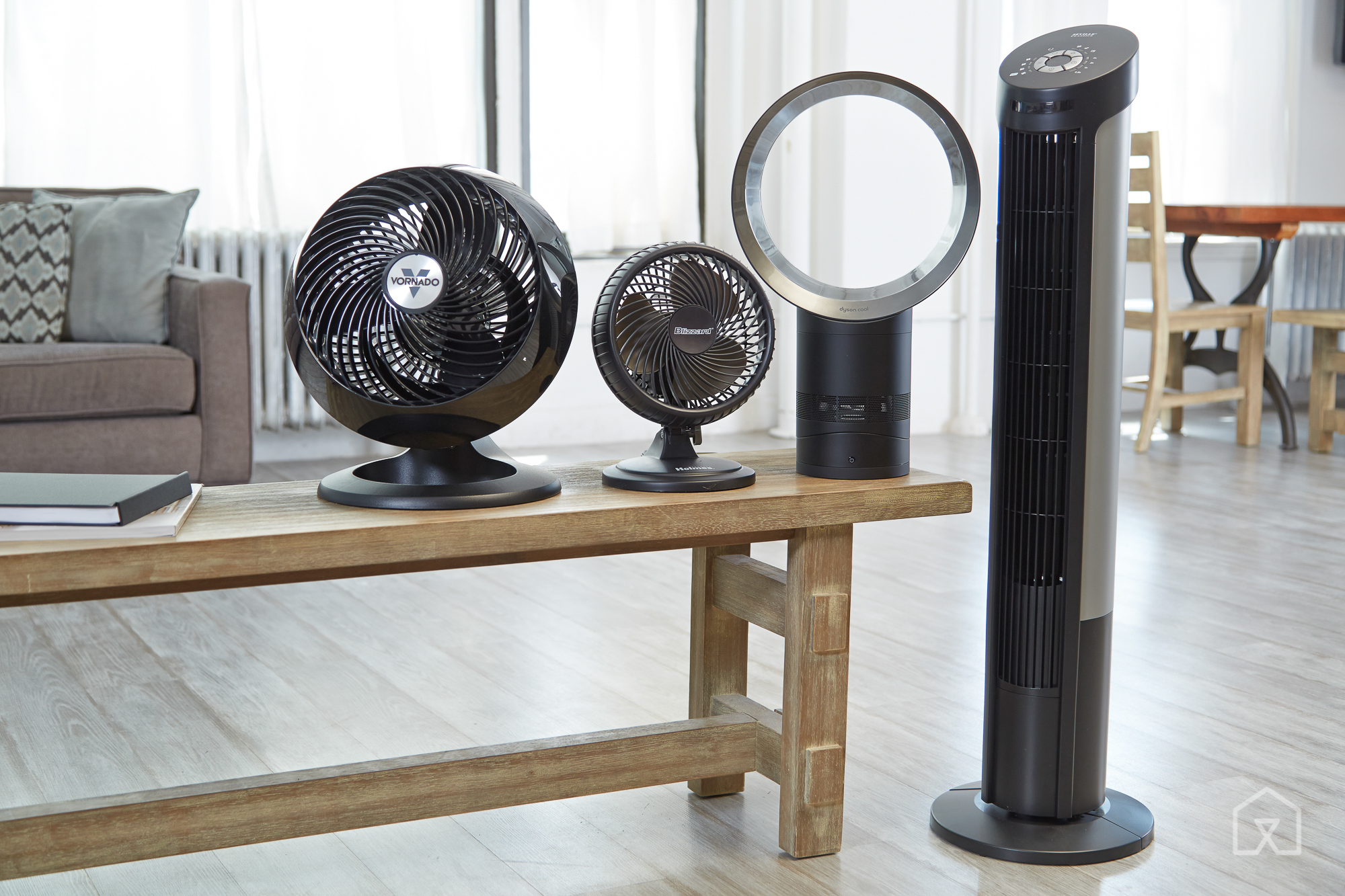 After more than 60 hours of research—including three separate interviews with fan engineers and product testing experts as well as several days measuring air circulation, airflow velocity, and decibel levels with HVAC equipment—we think the Seville Classics UltraSlimline 40" Tower Fan is the best fan for most people.

The first thing we did was break down fans into two basic groups: room fans designed to cool a larger space, and desk fans designed for use in smaller, personal spaces. Then we checked to see which fans from each category were the most popular on a number of websites. To trim the massive number of fans, we decided to consider only products with at least 100 reviews and an average rating of four stars or higher.

Based on our conversations with industrial product testing company Intertek, the three key metrics for measuring fans' performance are airflow velocity, air circulation, and noise. To test the airflow velocity, we built a rudimentary wind tunnel out of cardboard and duct tape. (It was simple, but we described it to Intertek, and our sources said it should do the job.) So with a fan blowing from one end and a digital anemometer at the other, we collected a series of velocity readings in cubic feet per minute (CFM), a standard unit of measurement used by HVAC contractors.

To assess air circulation, we fastened seven ribbons at different locations throughout a 285-square-foot room. We placed each fan at the same location in the room, and set to its highest setting with the oscillation mode turned on. We then noted how many of the ribbons stirred or rustled.

The third key metric we tested was noise. We used an iOS noise-meter app and measured the output of each fan in dB(C). We also looked at the remote-control performance, ergonomics, and safety of each fan, but these factors didn't influence our picks as much. 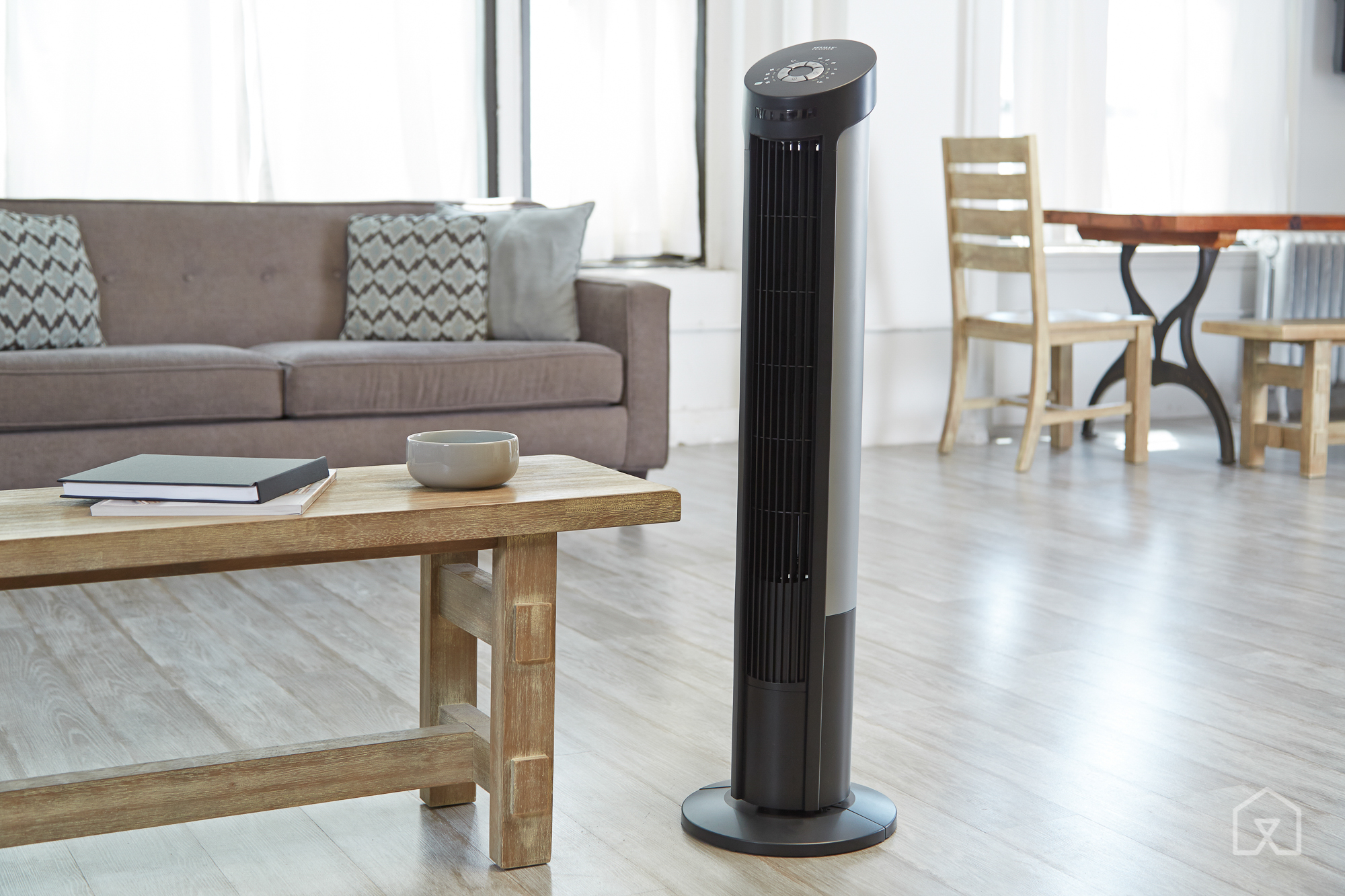 Of all the fans we tested the Seville Classics UltraSlimline 40" Tower Fan struck the best balance of performance and price. It did not dominate the other fans in any specific category—in fact, it proved middling in our airflow and circulation tests. But the Seville was the only fan we tested that did not suffer a significant flaw with regards to airflow, circulation, noise, price, build, stability, quality, design, or convenience. It was one of the quietest fans we tested, averaging 57.2 dB(C) on its highest setting, and has a wide oscillation range of 75 degrees.

In our airflow and circulation tests, the UltraSlimline proved fine. We registered an average CFM of 680.2, and the UltraSlimline moved four out of seven ribbons in our 285-square-foot test room. It wasn't the top performer in either test, but in no way did the UltraSlimline fall short in its ability to cool the room we were sitting in. We feel the other standout factors for the Seville make up for the middling circulation performance.

Since around 2016, we've noticed a steady trickle of Amazon reviews complaining about the motor failing after only a few months of use. Our editor-in-chief also experienced the same problem. We reached out to Seville for comment, and a representative told us that the company "intend[s] to address any issues" it finds. The representative said the return rate for the UltraSlimline remains low, and were quick to highlight the one-year return policy on all Seville products. So keep that receipt! 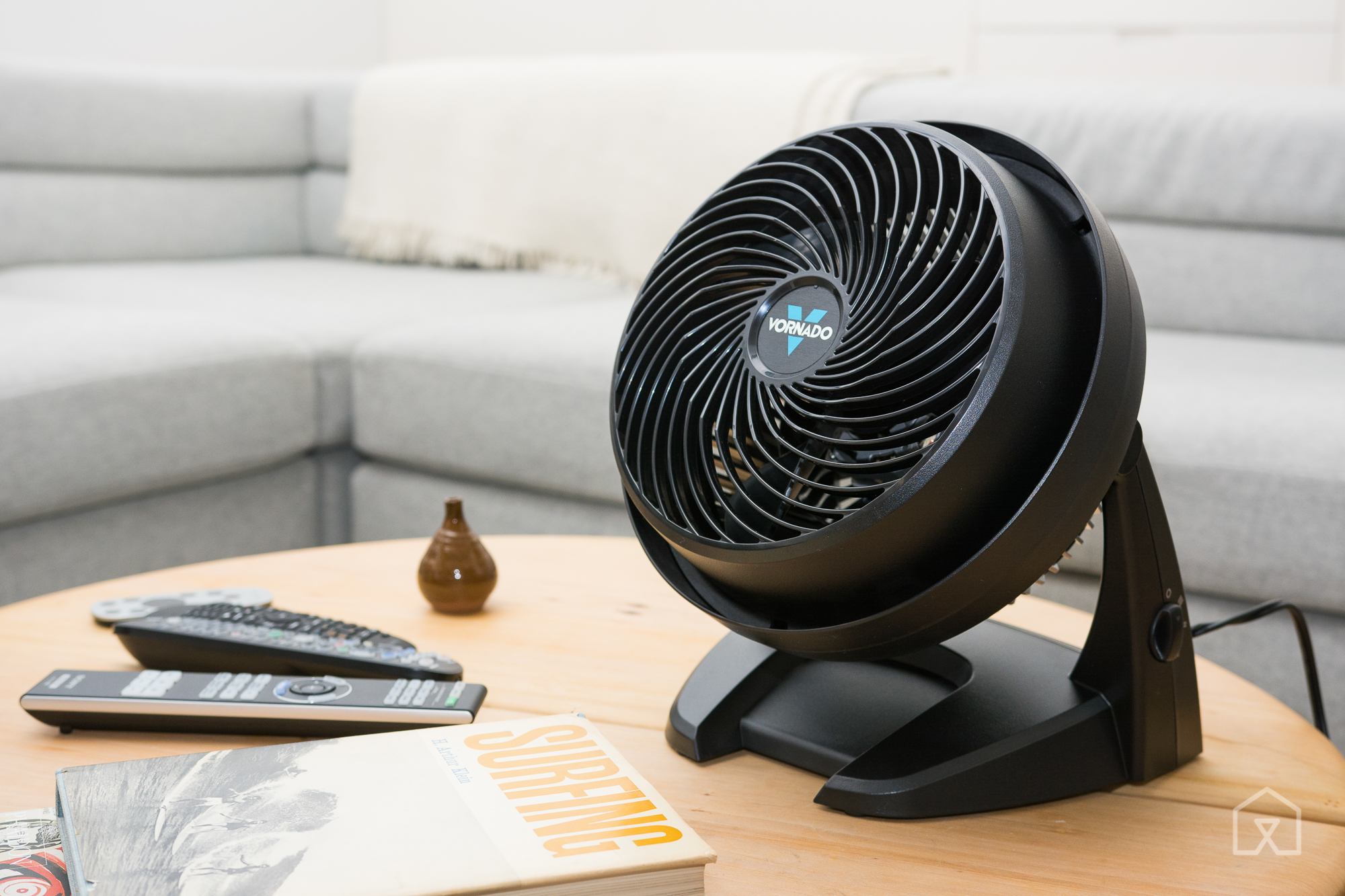 If you want more-powerful performance, but still have an eye on price, go with the Vornado 630. It outperformed our top pick in both our airflow and air circulation tests, has better reviews, is backed by a better warranty, and costs only around $5 more. We also found it was much easier to clean than a tower fan. However, the 630 is not our pick because it has only three speed settings, does not have a remote or a sleep mode, and does not oscillate.

In our airflow test, the 630 registered an average CFM of 781.30, the third highest in our test group. In the air circulation test, the 630 moved five out of seven ribbons.

With an average reading of 61.2 dB(C) at the highest setting and 53.4 dB(C) at the lowest, the 630 was the third loudest fan we tested. Despite this, the tone was consistent and not very pitchy, and we didn't think the 630 was irritatingly noisy. 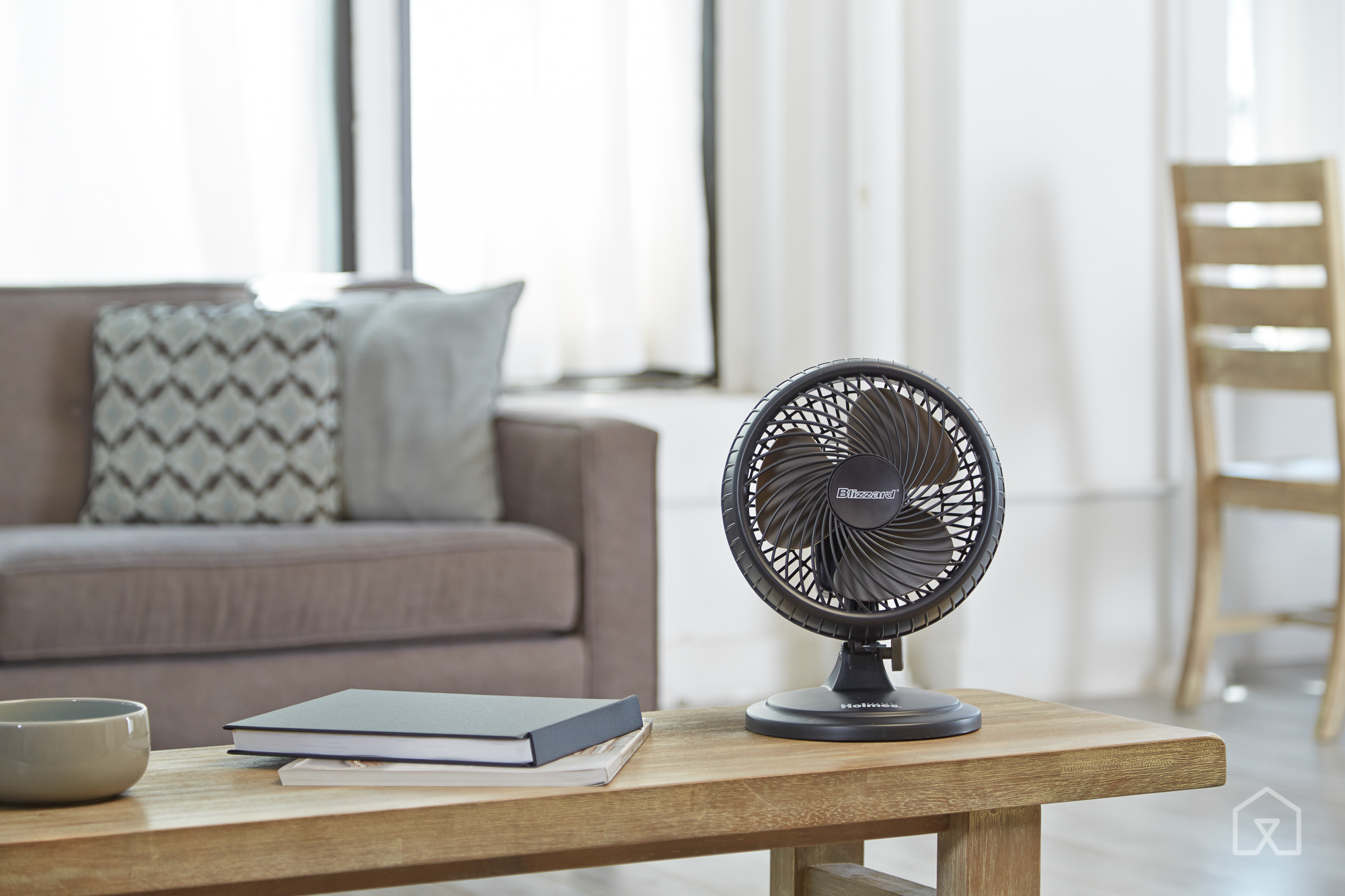 The Holmes Lil' Blizzard 8-Inch Oscillating Table Fan is the best option for a small space like a desk or a bedside table. This wasn't the most powerful desk fan we tested, but it proved to be the most pleasant one to use. You get a pivoting head, the ability to oscillate in a wide 40-degree arc, and two power settings. These features aren't unique to the Holmes, but the combination gives you more than you get with any other fan at this size and price.

Most of the complaints about the Lil' Blizzard concern its build quality. People complain that it's made of flimsy plastic, and we're not going to lie—it totally is. Despite that, it still managed to pass our fingertip safety test, and none of the other fans in this category did that. One other flaw: The Lil' Blizzard was the loudest fan in its category, averaging about 70 dB(C). 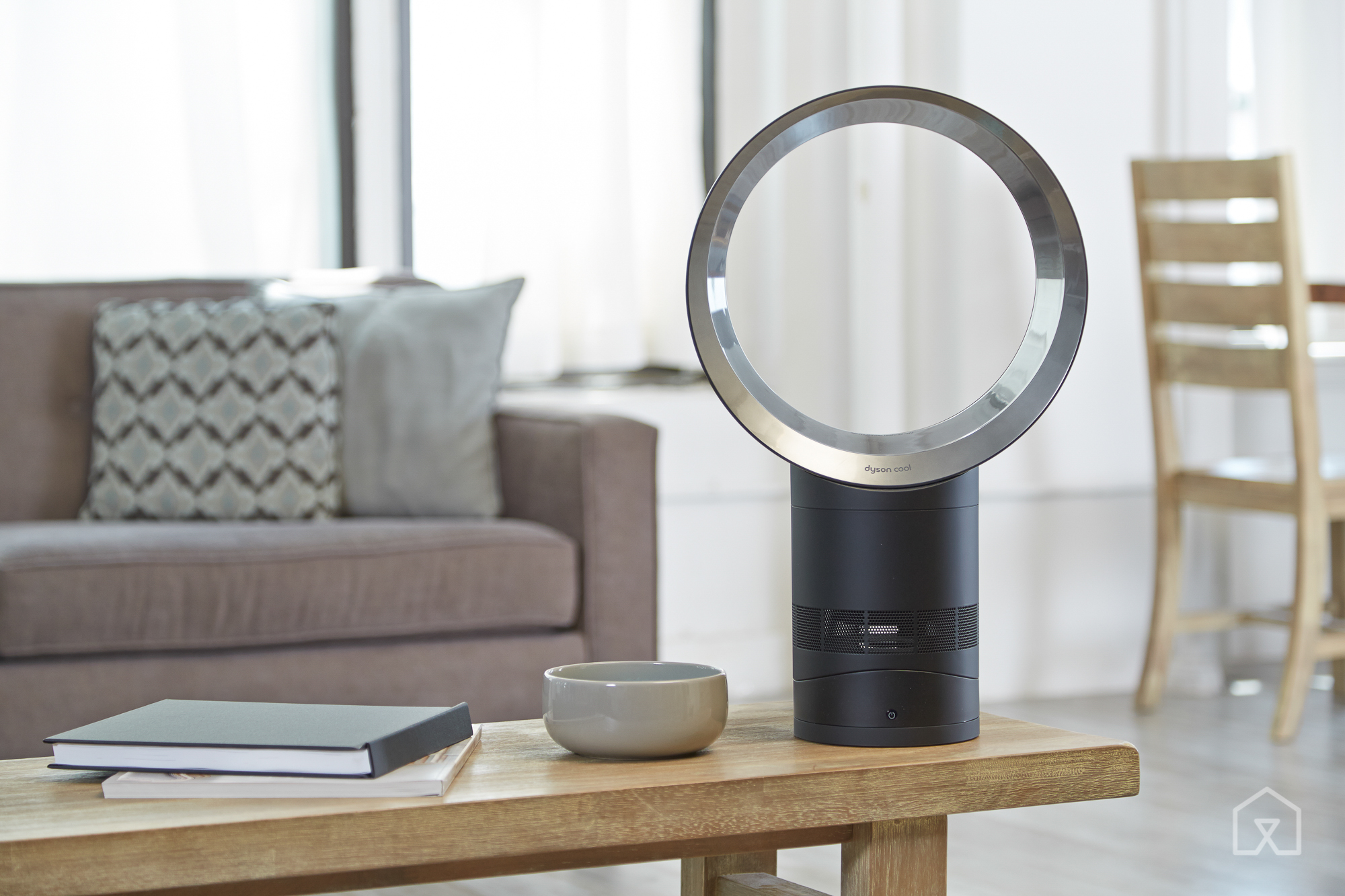 The Dyson Air Multiplier AM06, though expensive, was far and away the best desk fan we found. It was the quietest fan we tested, and its blade-less design makes it super easy to clean and an elegant piece of decor for any room. It's also flexible, with 10 power settings and a wide range for the sleep timer. But as much as we like the performance, aesthetics, and even the sound of the AM06, the price is hardly justifiable when you consider that a device at a fraction of the cost will serve a very similar function and perhaps even cool a larger room faster.

With an average CFM of 569.11, the Air Multiplier actually had one of the lowest airflow velocities in our test group. But the Dyson is a perfect example of why wind tunnel airflow tests are not enough to gauge a fan's overall power. In our whole-room air circulation test, the Air Multiplier moved six out of seven ribbons and was one of just two fans able to move the ribbon placed directly behind the fan. This device may not deliver the highest velocity of airflow, but when it comes to actually circulating air throughout a room, it's exemplary. It's also the quietest fan we tested, registering a mere 49.7 dB(C) on its highest setting.

In this article: airmultiplierAM06, dyson, fan, gear, holmes, home, LilBlizzard, partner, seville, sweethome, syndicated, thesweethome, vornado, vornado630, wirecutter
All products recommended by Engadget are selected by our editorial team, independent of our parent company. Some of our stories include affiliate links. If you buy something through one of these links, we may earn an affiliate commission.