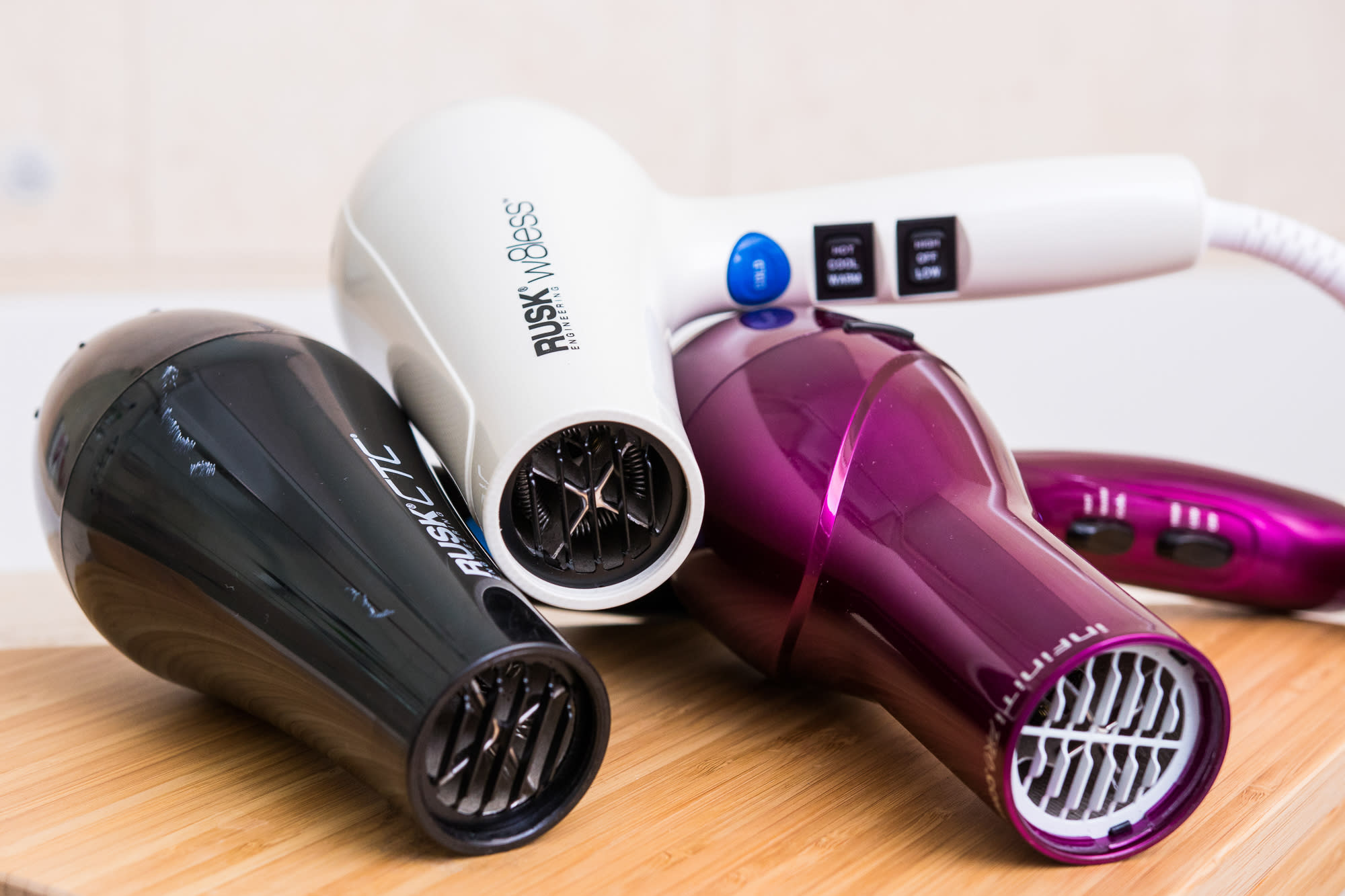 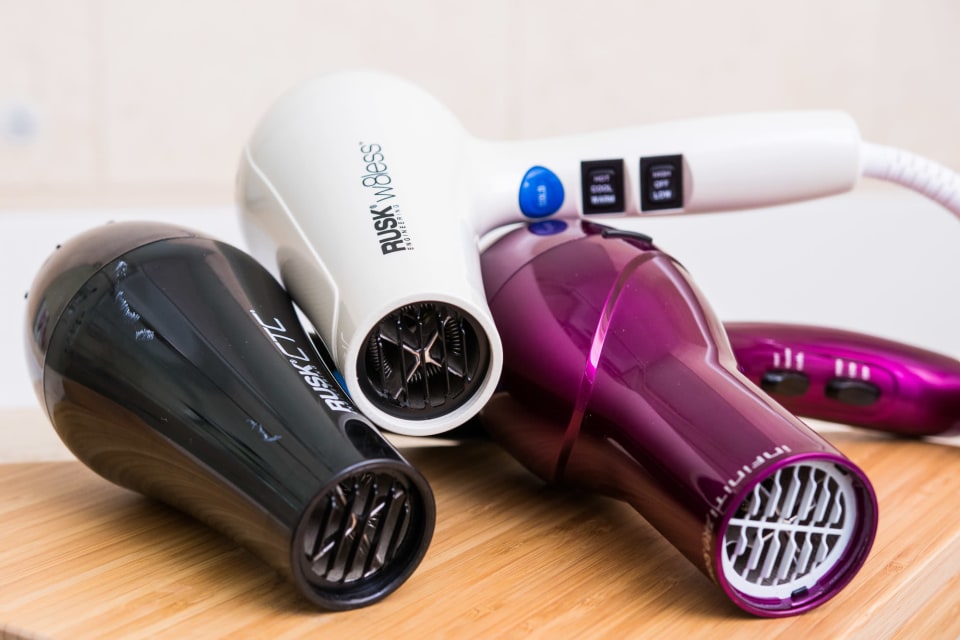 After more than 20 hours of research and interviews; more than 10 hours of putting 12 dryers through speed, heat, and time tests; a holiday season's worth of hairstyling; and working our way through all the marketing claims, we think the Rusk W8less is the best for most people. If you can't leave the house with wet hair for aesthetic reasons or because it's below freezing outside and you don't want your head to be covered in icicles, you need a hair dryer. You also need one if you plan to use other hot tools on your hair—make sure you're getting your hair really dry if you are going to take a flat iron to it. An armful of the dryers we considered. Photo: Michael Hession

Hair dryer boxes are adorned with a ton of buzzwords and specs, but hairstylist Allen Ruiz told us he looks for only two things: "hot and fast." These features are connected to the wattage, which is generally around 1,875 watts for most hair dryers. According to engineer Jim Shapiro, "Essentially all of the energy used by each dryer will be converted into heat, so don't expect or look for much difference among the dryers here." This is where we arrived at a central truth about hair dryers: Their performance doesn't differ much based on advertised specs.

Instead, we narrowed the field based on other features, such as multiple heat settings, a cool-shot button, a nozzle that's compatible with attachments, a cord that's long enough to reach across a bathroom, and an intake filter that's removable for cleaning out debris. We also looked for dryers that are compatible with a diffuser to help dry curly, wavy, or textured hair, and we paid a lot of attention to how each dryer felt in our hands.

Based on these criteria, we picked 12 dryers to test. We started by gauging each dryer's speed, heat, noise level, and weight, and how long it took to dry a swatch of hair wet with 5 grams of water on the highest setting. These tests helped us identify our favorite dryers, which we used in our daily routines for a couple of weeks before settling on our picks. The Rusk W8less lives up to its name, weighing less than a pound. Photo: Michael Hession

The Rusk W8less has all the features you need in a hair dryer while costing a fraction of the price of a luxury model. In our tests, it produced the fastest and hottest air of all (60 mph and 130 °F, respectively). The buttons are all nicely placed—easy to push, but hard to press accidentally—and the cord is long enough (8 feet) to reach distant outlets. Unlike on other dryers, the cool-shot button is wide, so holding it down for several seconds isn't uncomfortable.

Most important, the Rusk W8less should take about the same amount of time to dry hair as dryers that cost hundreds of dollars (and do it faster than some less expensive competitors). It will make your hair look just as nice. Though it does come with a two-year warranty, it does not include a diffuser—you'll have to buy one separately. The Rusk CTC Lite, our former top pick, is nearly identical to the Rusk W8less, with a few drawbacks, making it a solid choice to consider if our top pick is sold out or you strongly prefer a black glossy finish over a white glossy finish. This model has one major upside if you have curly hair: It comes with a diffuser; our top pick, the W8less, does not. The CTC Lite's nozzle is also slightly shorter. However, it lacks the grip-enhancing groove that makes the W8less feel especially nice in our hands. The CTC Lite also tends to cost more than the W8less. If you don't dry your hair often and you have an outlet near your mirror, the Conair Tourmaline Ceramic dryer does a good job and doesn't have any hugely annoying design features. At 0.91 pound, this model was lighter than most of the other models we tested. It comes with a two-year warranty.

However, this dryer has two big downsides. First, the handle is thicker and straighter than those of the other dryers we tested, making it a little more annoying to hold. Second, the cord is shorter, at just 5 feet. If your outlet is more than three steps from where you intend to dry your hair, you need to choose a different dryer; don't try hooking this one up to an extension cord, as doing so could start a fire. The Conair Infiniti Pro is a great hair dryer for its price, but it's heavier than our other picks. Photo: Michael Hession

In our tests, the 58 mph, 108 °F airflow from the Conair Infiniti Pro was nearly as fast and hot as that of our top pick. However, this model is considerably less expensive and it comes with a concentrator and a diffuser.

The main reason it's not our top pick is its weight. At 1.2 pounds, it's noticeably heavier to hold, especially after several minutes of drying. Its cord is also two feet shorter than that of our top pick.

In this article: conair, gear, hairdryer, home, partner, rusk, ruskCTClite, RuskW8less, syndicated, thewirecutter, wirecutter
All products recommended by Engadget are selected by our editorial team, independent of our parent company. Some of our stories include affiliate links. If you buy something through one of these links, we may earn an affiliate commission.