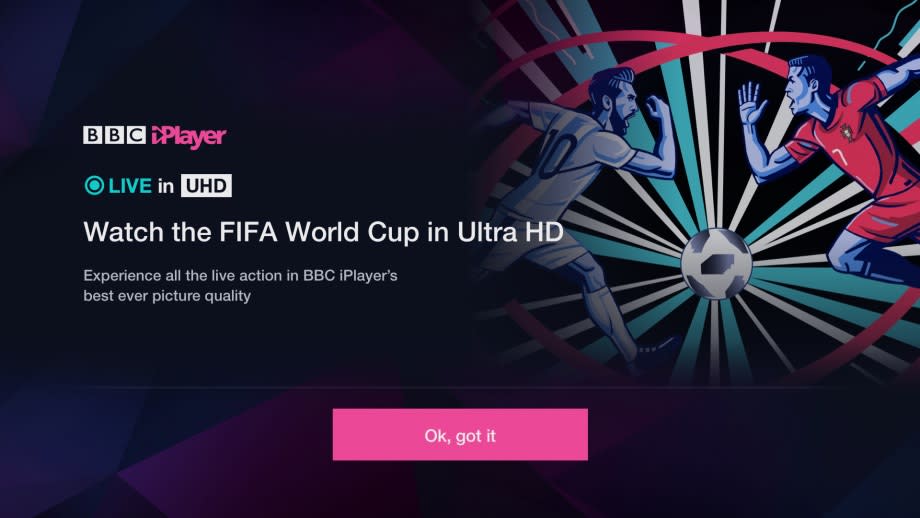 The BBC is finally embracing live 4K. After a run of very limited tests back in 2014 and the recent FA Cup Final, the revered broadcasting institution plans on proving its mettle by showing the FIFA World Cup live to audiences in Ultra HD and virtual reality. It'll be the first time the Beeb has shown a live tournament in this way, and it's a heck of a tournament to start with.

There's a catch, though. The broadcast will technically count as a trial, and while all 29 of BBC One's World Cup matches will be shown live via BBC iPlayer, there will only be a limited number of spaces available for each game. It's not clear exactly how many spots are open -- at least tens of thousands--– but you'll only be able to watch on a first come, first served basis. This should pave the way for optimized Ultra HD broadcasts in the future, though.

The broadcaster is also using the World Cup to test out its virtual reality offering. It's developed an app (the catchily-titled "BBC Sport VR – FIFA World Cup Russia 2018" app) that will let anyone with a smartphone or compatible VR headset watch live coverage of all 33 matches from their very own luxury private box in a Russian stadium. You'll be able to watch daily highlights packages on one of your box's virtual big screens at the same time as the live action, or switch your view so you're sat right behind one of the goals on the pitch. No restrictions on numbers here, and the app will should be arriving soon on Apple, Android, Gear VR, Oculus Go and PlayStation VR.

This is a pretty significant undertaking for the BBC, which has traditionally lost out to more "dedicated" sports broadcasters, such as Sky and BT Sport, which have had 4K under their belts for a while. The World Cup is arguably the biggest sporting event on the planet, so the Beeb's decision to show the beautiful game in this way puts the organisation among the big boys. Plus, it brings an enhanced viewing experience to those who don't have existing 4K subscriptions or the cash to fork out for pay-per view. Hopefully these trials will set the scene for a future Ultra HD World Cup where the BBC can get everyone involved.

In this article: 4K, av, BBC, broadcast, FIFA, football, iPlayer, live, Russia, sport, UltraHD, VR, WorldCup
All products recommended by Engadget are selected by our editorial team, independent of our parent company. Some of our stories include affiliate links. If you buy something through one of these links, we may earn an affiliate commission.