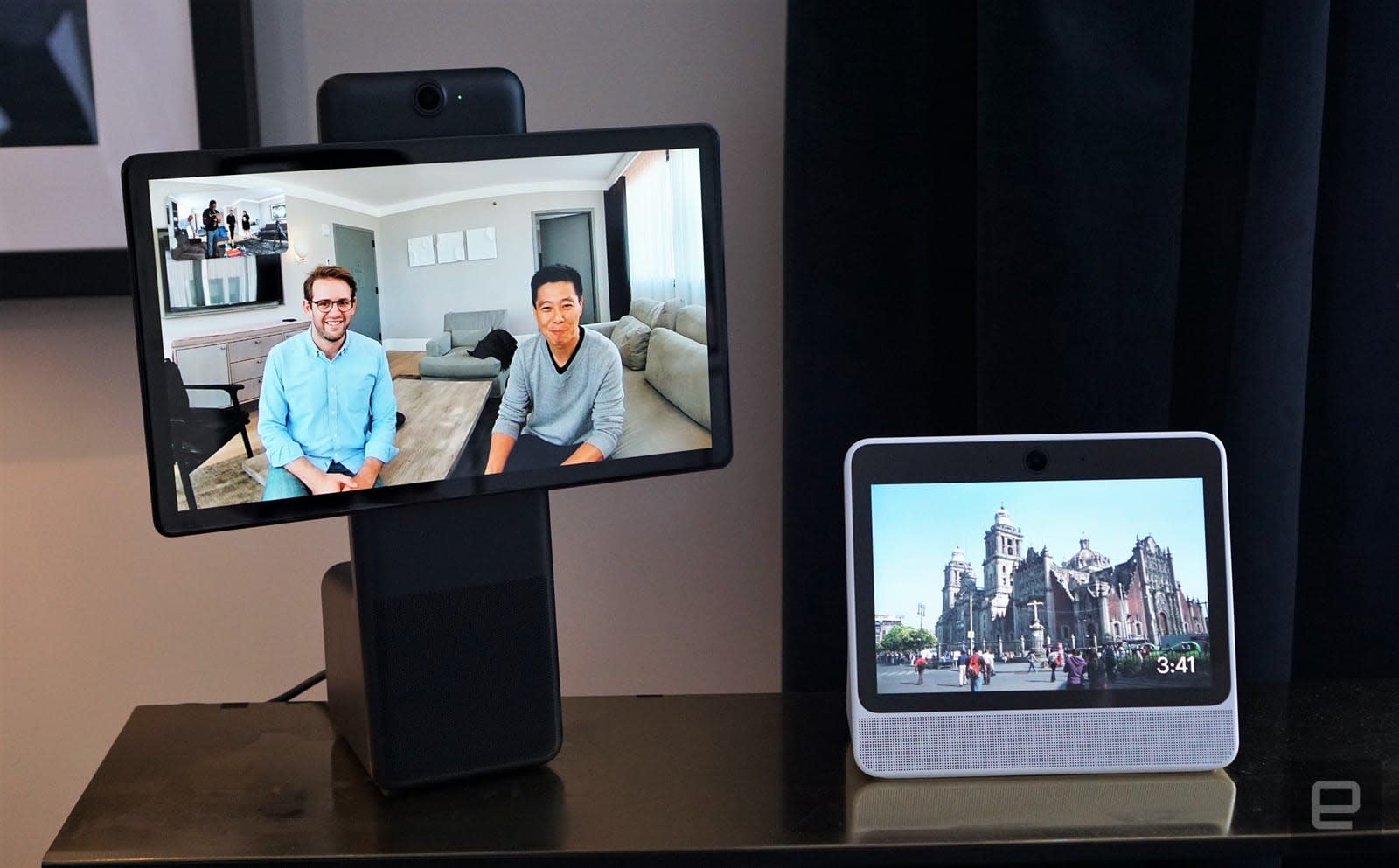 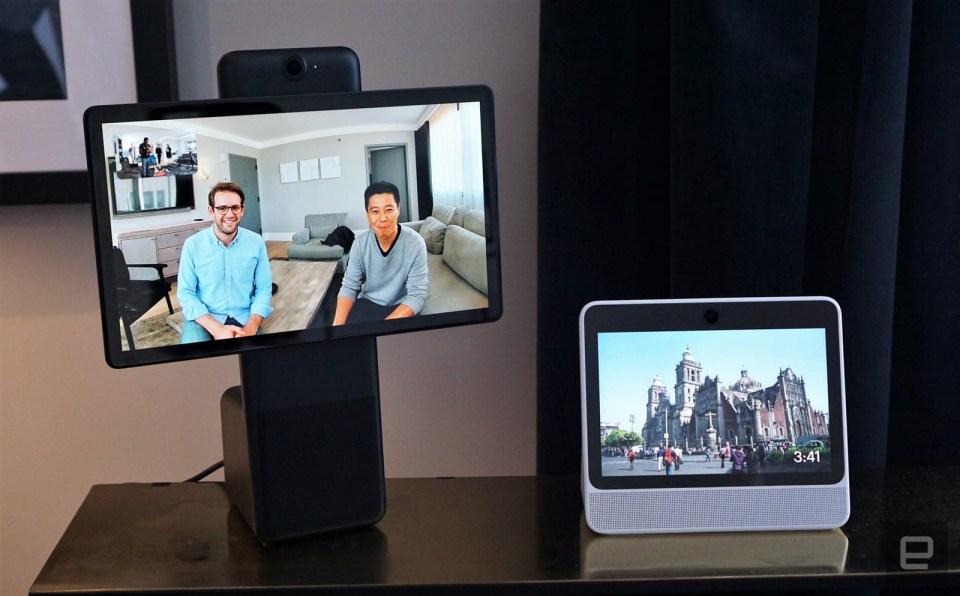 It's never been easier to video chat with someone today -- you can thank the rise of ubiquitous webcams, front-facing mobile cameras and social networks for that. But the act of having a video conversation with someone is still a pain. You have to coordinate with whoever you want to call, make sure you're using a compatible service, and if you're chatting from your phone, you'll also be stuck holding it up for the entire conversation. Clearly, there's still plenty of room for improvement.

So, for the past two years, Facebook has been working on a solution, and it's not at all what you'd expect. The company is unveiling two smart displays, the Portal ($199) and Portal+ ($349), which are focused on video chatting. They have AI-powered cameras to track you as you move around the room, large screens to easily see who you're talking to, an array of four microphones (plus more AI smarts) to capture everything you're saying and decent speakers, so the conversation is always clear. Befitting their name, they're essentially windows that let you stay in touch with your friends and family as if you were in the same room, a concept Facebook calls "social presence." If that sounds familiar, it's because it's similar to the concept of "presence" in virtual reality, which describes how well a VR experience transports you to another place. The team behind Portal is also part of Facebook's VR/AR group -- except it's not part of Oculus. Instead, these devices are the grand debut for Facebook's homegrown hardware group.

The Portal looks a lot like Amazon's Echo Show and Lenovo's Google-powered Smart Display, with a 10.1-inch screen (running at 1,280 by 800 pixels) and speakers along its bottom. The Portal+ is even more intriguing, with a 15.6-inch 1080p screen that rotates from portrait to landscape mode with a slight nudge, and it has an even larger set of speakers at its base. What sets them apart from other smart screens is their focus: Facebook is positioning them as a seamless solution for video chatting, rather than just generic smart screens with virtual assistants. Both devices also feature Amazon's Alexa, which makes them simultaneously a competitor and compliment to that company's growing ecosystem.

Starting a video call with the Portal is easy: Just say "Hey Portal," tell it to call one of your Facebook contacts and confirm the person you want to chat with. While they work best when calling other Portal devices, they can also ring up anyone on Facebook Messenger. You can see the availability of your friends, so you won't be calling them at an awkward time.

In a brief demo in a swanky New York City hotel, I watched as Facebook representatives called their colleagues in another room. It took just a few seconds for them to appear on the Portal+ in crystal-clear high definition. Really though, that's just table stakes today. What makes the Portal devices unique is that their 12-megapixel cameras aren't stuck with one angle. Facebook developed algorithms to let Portal follow you around the room with smooth movements, almost as if a professional camera operator were actually documenting your conversation. The company says it worked with award-winning cinematographers to design how the virtual camera moves, and it shows. 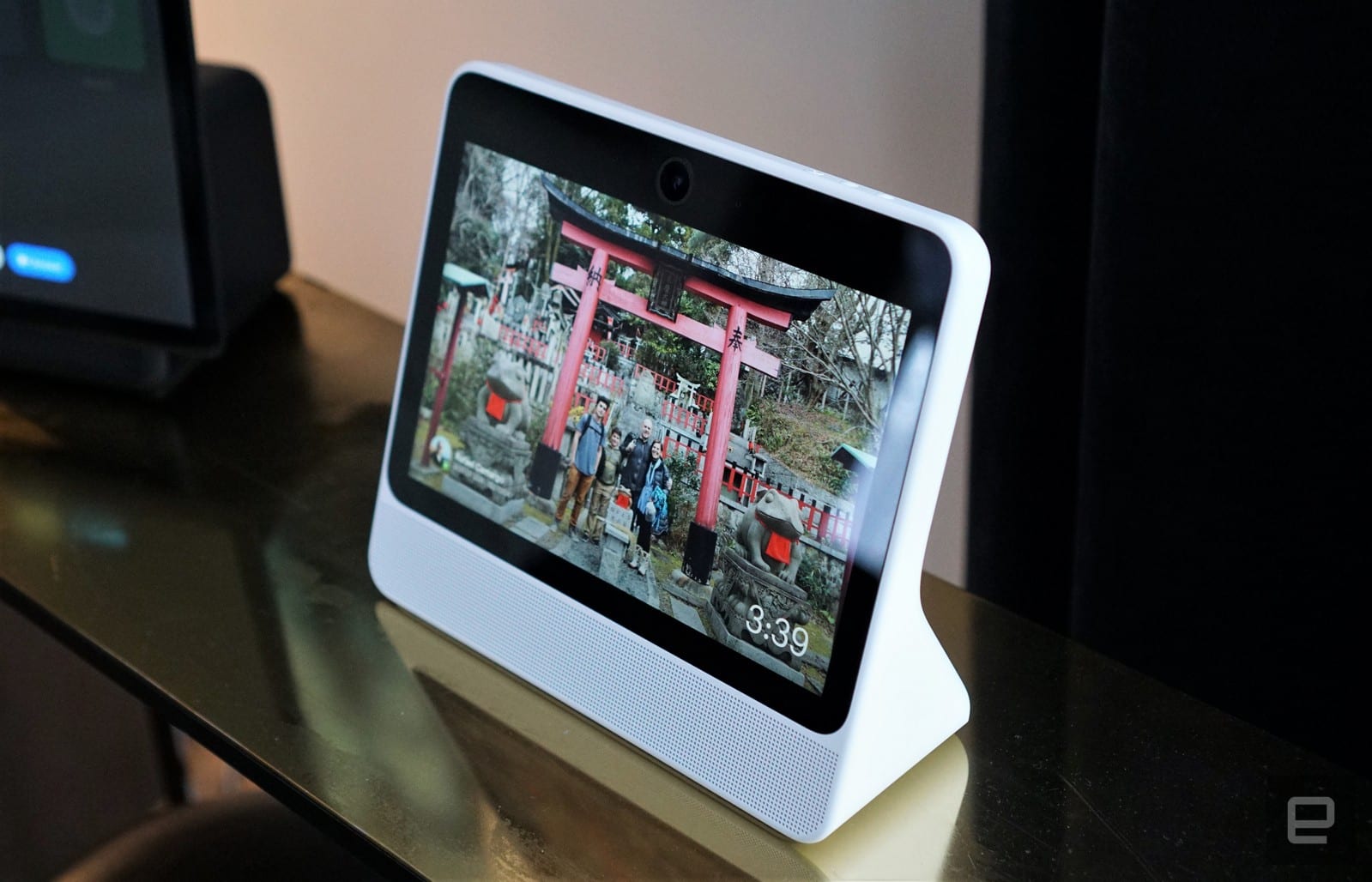 As one Facebook representative walked from one end of his hotel room to the other, the picture smoothly shifted to keep him in frame. At first, I thought the camera itself was actually moving, but no -- it's all in the software. The feature looks even better in portrait mode on the Portal+ -- it almost looks like you're talking to someone actually in the room.

Facebook is using similar technology to let the Portal's microphones capture your voice clearly as you move around. The idea is to have the devices in a central location and go about your life, without worrying about bringing the microphone closer to you or keeping yourself in frame. Think of it like hands-free video chat. You could conceivably have a Portal in your kitchen and have an ongoing conversation with a friend as you prepare dinner, for example.

The Portal devices also pack in a few new twists: You could throw on a Spotify soundtrack or Food Network show while you're video chatting, and the devices will keep the audio in sync. (Noise-canceling technology helps to avoid annoying echoing.) There's also a "Storytime" mode that lets you tell a dramatic story, aided by teleprompter text, while your voice, face and environment get transformed with AR to describe the tale. It's the sort of thing that could make a long work trip less painful for kids and parents alike.

And when they're on standby, the Portal devices can also act as digital picture frames for photos and videos, while also alerting you to important events like birthdays. With their integration with Alexa, they perform like any other smart display, so you can ask the weather, or stream your favorite radio station or podcast.

Facebook VP Rafa Camarago says part of the inspiration for Portal came from an unlikely source: A 2015 Wait But Why article, "The Tail End," in which the author realized he spent 93 percent of his projected time with his parents by the end of high school. It's the sort of existential thought that reminds you just how important our time with family actually is, especially as we typically spend less time together in adulthood. Early testers for Portal reported spending much more time video chatting with their friends and relatives, Camarago says.

Of course, Facebook is still reeling from the recent massive hack the affected up to 90 million users. So the idea of giving the social network a direct video feed into your home might seem ill-timed. Still, Facebook says it's building Portal with security in mind: Your video chats are encrypted, and the company doesn't keep any records of your calls. The AI-powered camera and voice features all run locally, so they're not relying on Facebook's servers, and it doesn't use any facial recognition technology (though that seems like something that could easily change over the next few years). Like Amazon's Alexa, you can also delete your voice history manually.

And Facebook didn't skimp on physical security either. You can hit a button to disable the Portal's camera and microphone, and there's also a bundled camera cover for assured privacy. You can also set up a passcode, so your kids and guests won't be making random calls to all of your Facebook friends. 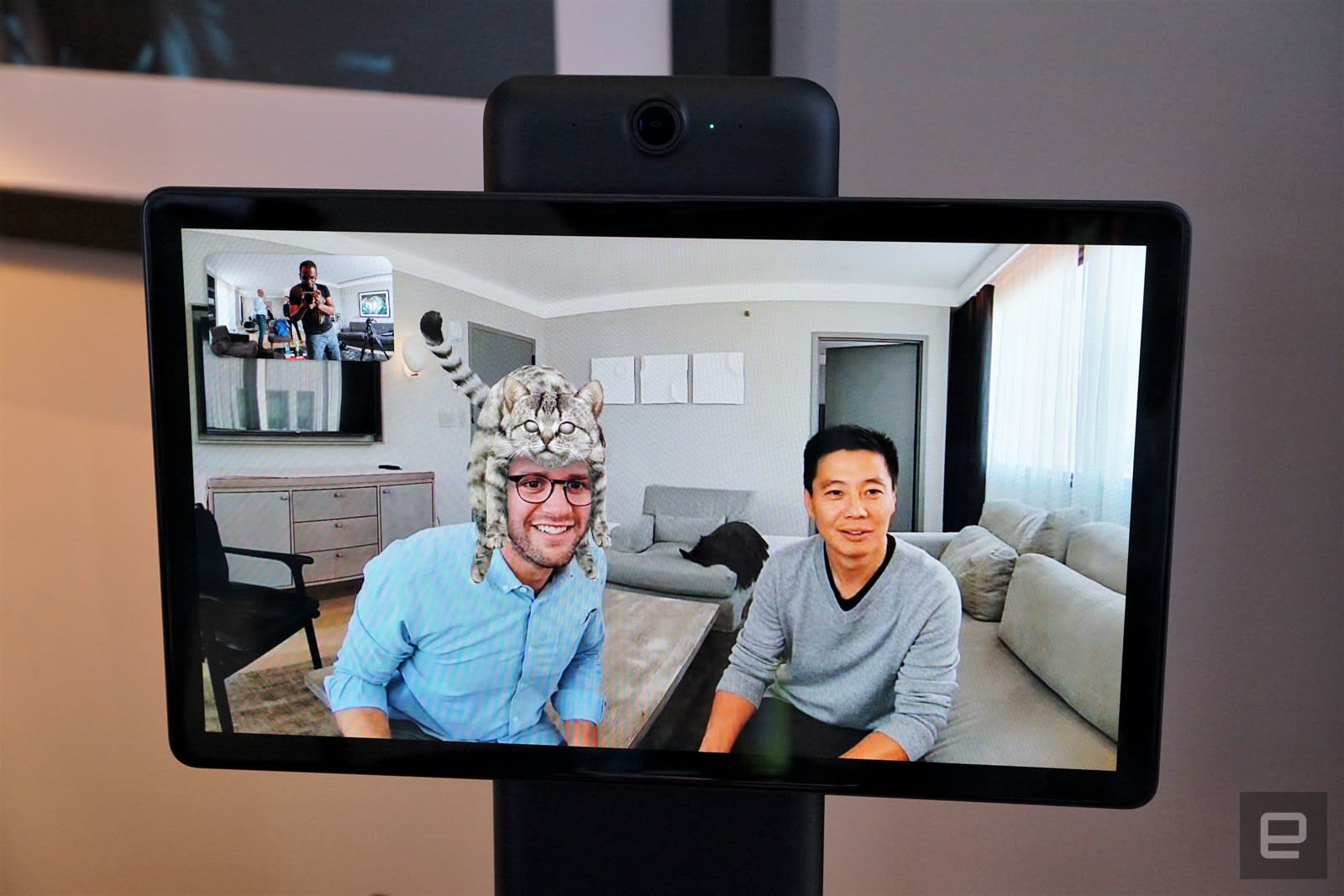 You can pre-order Portal and Portal+ today for $199 and $349, respectively. They're expected to ship in November. Facebook is also offering $100 off when you buy any two Portal devices -- a smart move since they'd be perfect gifts for grandparents. Sure, they aren't cheap. But they might be worth it for anyone who lives far away from their loved ones and regrets not having enough face time with them.

In this article: Alexa, facebook, FacebookMessenger, gadgetry, gadgets, gear, Portal, Portal+, smartdisplays, videochatting
All products recommended by Engadget are selected by our editorial team, independent of our parent company. Some of our stories include affiliate links. If you buy something through one of these links, we may earn an affiliate commission.