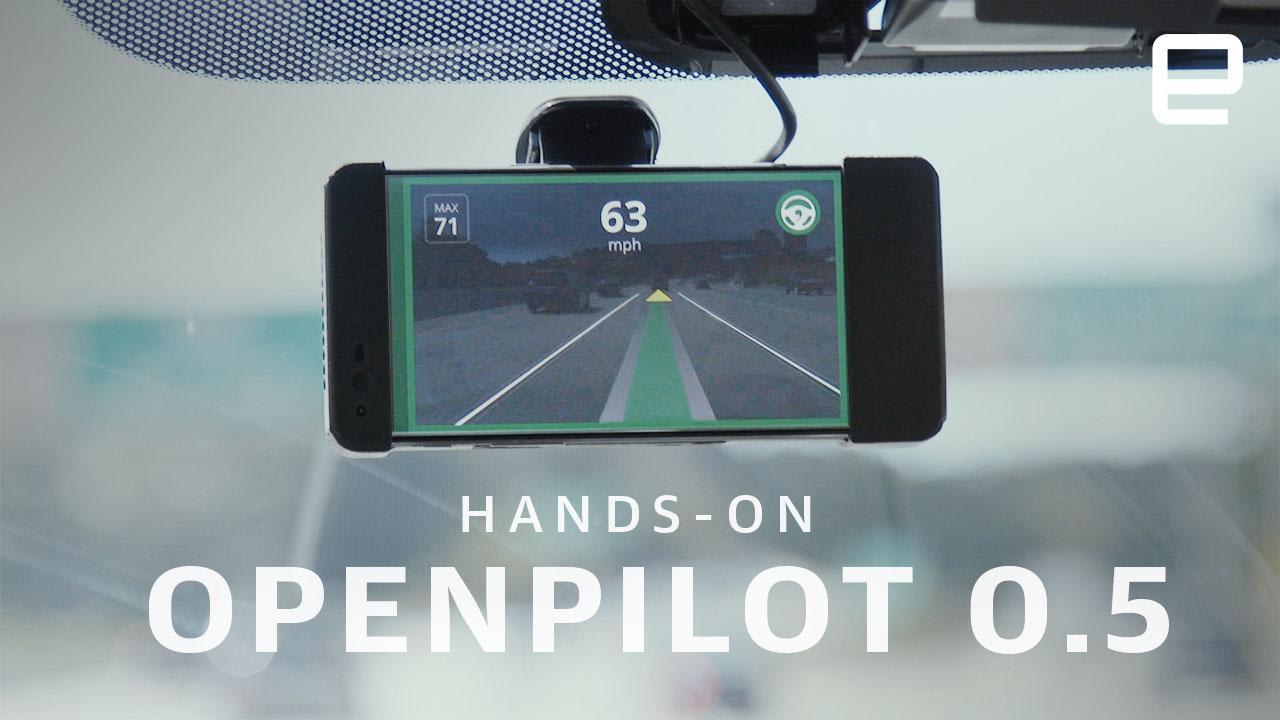 Autonomous vehicle technology is just starting to go mainstream, which means, for the most part, it's still only available to those who can afford a Tesla with Autopilot or a Cadillac with SuperCruise. Both of those cars start at around 60 to 70 grand by the way. So where's the digital chauffeur for the rest of us? Enter Comma.ai.

Famed hacker George Hotz has been developing a driver-assistance system, which can retrofit existing vehicles (with Level 2 autonomy), for a number of years now. However, we haven't been afforded a demo of the technology since 2015, when the company ran into regulatory issues with the US government. But with Friday's update release of  Openpilot 0.5, the company's open source autonomy software, Comma.ai was back on the roads, taking Engadget for a spin to show off the system's new bells and whistles.

Openpilot 0.5 offers a number of updates, the most exciting of which is its facial-tracking ability. In the last iteration of the dev kit, the driver assist would only operate for six minutes at a time -- long enough to be useful but not long enough for you to tune out entirely. The new version, however, will track the driver's face to ensure that they keep their eyes on the road. As long as you remain facing forward, the system will work for as long as you need it. 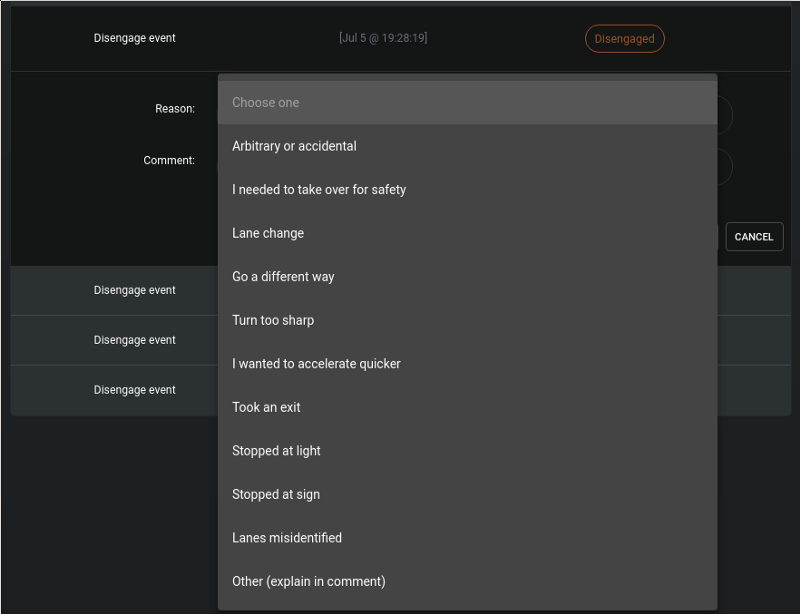 The company is also releasing a crowdsourced tracking tool called Comma.ai Explorer. Since the driver-assist feature is still undergoing development and being taught to avoid specific driving mistakes, the company encourages its users to not only upload their drive telemetry data to the Comma.ai servers but also annotate any "disengagements" (incidents when the assist had to return control to the driver) that the team uses to further improve the system's reliability.

Comma.ai's driver-assist system uses the same Panda ODB sensor, Giraffe bridge and EON dash cam hardware that we've seen before. The only things missing from the newest hardware iteration is Waze and Spotify, which were removed "to free up resources for larger models and precise localization," according to the company's Medium post.

The driver assist is compatible with virtually every new Toyota and Honda on the market (they just need to have a trim package that includes radar sensors) as well as select GM models -- including the SuperCruise-enabled Cadillacs.

Our test drive was ridiculously smooth. We took it for a 20-minute trip down the I-280 South in light to medium traffic. Once engaged, the Comma.ai drove flawlessly. All I had to do was engage the Honda Civic's cruise control and set my desired speed using buttons on the steering wheel. Once the driver assist took command, it automatically accelerated, braked and steered as needed to keep the vehicle in the center of its lane, a safe distance from the cars around it and keep up with the flow of traffic. It even maintained a super-safe 1.8-second gap behind the vehicle in front of it and automatically adjusted its position among the surrounding cars as they changed lanes.

Never once was I nervous about how the AI system was functioning, there were no abrupt speed changes, lane changes or other hiccups. The only time I had to take over control was when I intentionally exited the freeway. Honestly, this Comma.ai system is a better driver than I am, especially in heavy, stop-and-go traffic. My only responsibility was to keep my eyes on the road. If I looked down or to the right (as if I were looking at a something on the passenger seat) for more than 2 seconds, a visual alert would trigger on the dash cam unit. If I kept looking away for 4 seconds, an audio alarm would sound, and if I didn't return my gaze to the road within 6 seconds, the driver assist would automatically disengage and begin decelerating the vehicle. It'll still steer and brake as needed as it slows, but you'll have to take control of the car before you can re-engage the assist.

What's more, if you get caught looking away for more than 6 seconds on three separate times during the same trip, the assist will disengage and lock until you stop and restart the car. Similarly, the system will shut down if you open the driver-side door or unclick the driver's seatbelt. 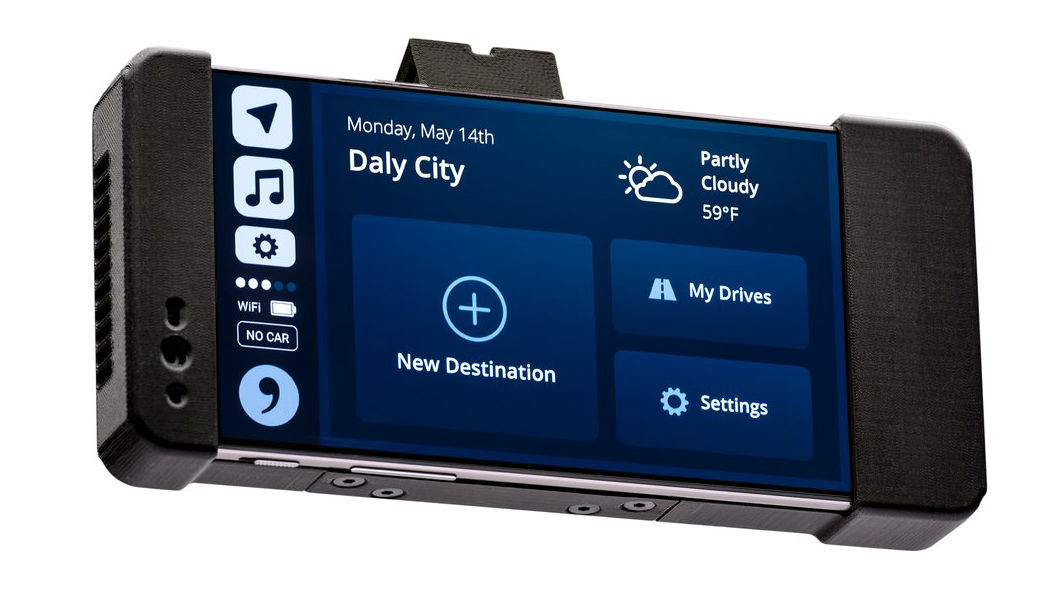 Comma.ai offers the necessary hardware through its web store (though you can also grab the Panda on Amazon), which can be installed in compatible vehicles in under 10 minutes with minimal tools, as you can see in the video above. The software that controls everything needs to be downloaded and installed separately (it's a regulatory thing) but is free from Github and, since the EON dash cam is really just an Android OnePlus 3 running inside a custom 3D-printed case, that installation is as easy as sideloading an app. There are also a host of YouTube instructional videos available to guide the process as well.

The entire system is still in beta and is geared more towards early adopters and enthusiasts -- so this isn't something you're going to want to surprise your tech-phobic parents with just yet. Don't worry, the company is reportedly hard at work developing an all-in-one consumer offering.

In this article: autonomouscars, business, Cabana, CommaAI, gadgetry, gadgets, gear, georgehotz, hacking, opendbc, Panda, personal computing, personalcomputing, self-drivingcars, SelfDrivingCar, services, transportation
All products recommended by Engadget are selected by our editorial team, independent of our parent company. Some of our stories include affiliate links. If you buy something through one of these links, we may earn an affiliate commission.