The service celebrates its 15th birthday a day before it kills off Inbox.

Today is April 1st, a day for pranks and corny jokes. One of the biggest culprits is Google, which comes up with a hoax every year (remember YouTube SnoopaVision or Google Play for Pets?). But on April 1st, 2004, Google debuted a product that was decidedly not a joke: Gmail. It was a service that revolutionized web mail, so much so that it has become an integral part of our daily lives.

Gmail began as invite-only, to the point where invitations were actually bought and sold on eBay as if they were some sort of precious commodity. Invitations would remain the sole way of signing up for the service until 2007. While webmail services like Hotmail and Yahoo Mail existed back then, Gmail had a killer selling point: a gigabyte of free storage. We might laugh at that now, but that was a huge amount of space at the time. (Google now offers 15GB standard, with the option to purchase more.) The thought of never having to delete or manage your email ever again was, and still is, an enticing one.

It wasn't just the gigabyte of storage that had people clamoring for gmail.com addresses. Google's email service offered other unique features too, like threaded conversations, fully integrated search and the ability to send attachments up to 25MB in size. Thanks to a javascript technique called AJAX, it also refreshed automatically. Gmail truly felt like a full-fledged email app, though it was entirely web-based. Even when Hotmail and Yahoo Mail were around, many people still used clients like Outlook or Eudora. Gmail signified the start of something different. Slowly, users were moving away from desktop apps and relying just on the web. 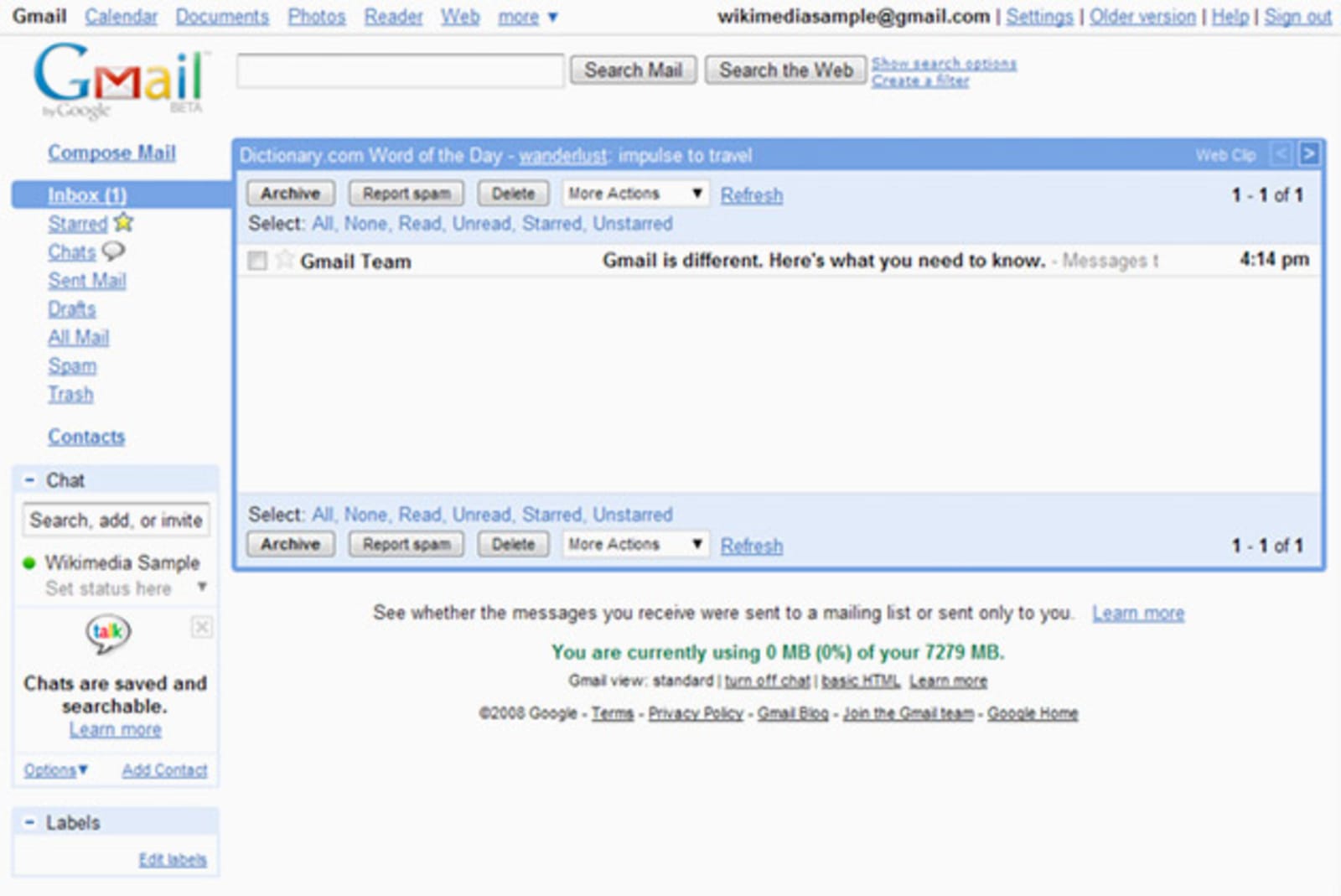 Turn on browser notifications to receive breaking news alerts from Engadget
You can disable notifications at any time in your settings menu.
Not now
Gmail in 2004

Gmail also helped introduce the idea of "the cloud" to the masses. You no longer had to rely on your dinky computer hard drive for storage; you could put it all online instead. At the time, the speed of searching through your emails in a desktop client was dependent on your computer. Gmail, on the other hand, had built-in search that ran on Google's servers. And the notion that you could access all of your email no matter what computer you were using -- all you needed was your browser -- was liberating.

Throughout the years, Gmail grew to encompass other aspects of everyday life. Instant messaging service GChat, for example, first appeared on it in 2005. (It eventually evolved into Hangouts.) Gmail was also integrated into other Google services like Google Tasks; now ticket-confirmation emails are instantly converted into events in Google Calendar, and you can now share large files over email with Google Drive. The arrival of G Suite, Google's enterprise solution, in 2006 made Gmail even more indispensable, as it started to be part of people's work lives too.

That's not to say Gmail is flawless. One of the reasons it's able to serve millions as a free service is by using data it gleans from your emails to display automated advertisements. It wasn't until 2017 that Google announced it would phase out email scanning and would instead rely on data gathered through its other services instead. 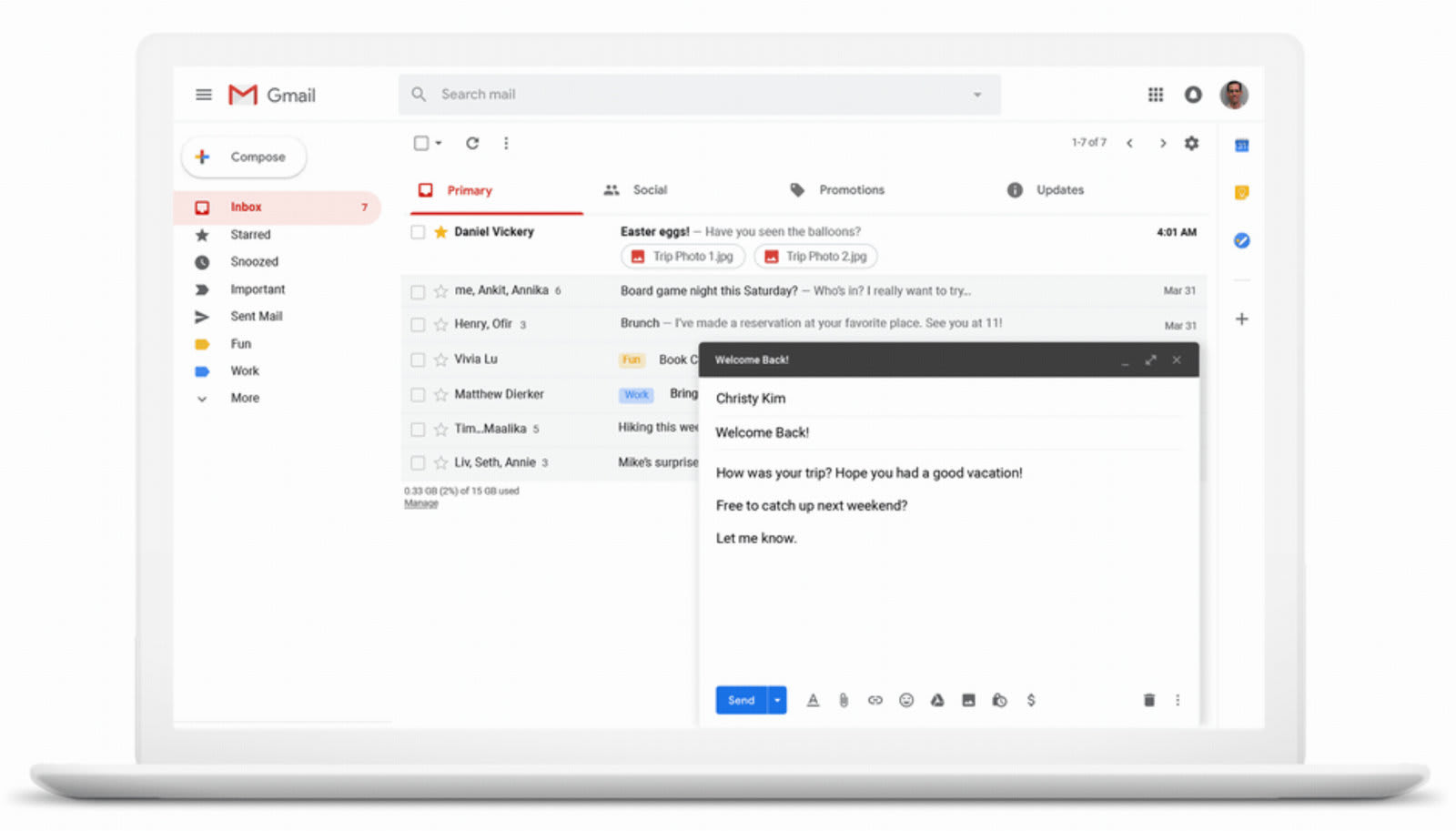 Other privacy-related mishaps included its integration with Google Buzz and Google+, two failed social networking projects. Buzz was a Gmail-integrated social network that unfortunately shared people's contacts without them knowing about it. In 2011, Google+ was so integrated with Gmail that you couldn't have an account on one platform without the other. In 2015, you could also email someone on Google+ even if you didn't know their email address.

Yet despite the occasional fumble, Gmail remains the No. 1 email service. One of the reasons behind Google's success is its constant evolution, like adding more storage, smarter spam controls and Android and iOS support. No matter the controversy, users have stuck with Gmail because it's become so hard to quit.

One of the biggest Gmail highlights over the past few years has come from a particularly popular innovation: Inbox by Gmail. It's a separate email and app that was originally born from Google's acquisition of Sparrow, an email client that had many clever ideas around sorting email. Inbox, therefore, inherited many of those same features. It was a separate web interface and app that were aimed at helping users manage and organize their email better.

And it turns out, people really liked it. One of Inbox's key features was that it intelligently bundled emails of similar types together, like promotions and tech news, without you having to do a lot of that sorting yourself. It also nudged you to follow up on sent emails, let you snooze emails for later and, perhaps my favorite, helped you unsubscribe from a mailing list with a single click. There were also Smart Reply and Smart Compose features that auto-generated predictive text as you type. Inbox was like Gmail, but more intelligent.

Ultimately, however, Gmail absorbed many of Inbox's features, which was likely Google's plan all along. Matthew Izatt, Gmail's product manager, stated in a blog post on September 12th, 2018, that "Inbox by Gmail has been a great place to experiment with new ideas" but it also wants to "take a more focused approach" to email. This meant, unfortunately, that the company was going to sunset Inbox, sending it to the Google graveyard, where it will rest alongside Reader and Google+ starting tomorrow.

This isn't entirely a bad thing, as there are rumors that other Inbox features like reminders, email pins and bundling are coming to Gmail too. But there are still those who preferred Inbox's minimalist style and simpler interface and claim that Gmail's implementations pale by comparison. One reader left a comment: "Seems like Google should have just switched to Inbox rather than using it to test features to move into Gmail."

But what are they going to do -- not use Gmail? Yes, you're free to use your own email clients and perhaps your own email provider too, but you'd be one of a few. Much like how Google has remained the world's most-used search engine, Gmail will likely remain the king of email for the foreseeable future, no matter the obstacle.

All products recommended by Engadget are selected by our editorial team, independent of our parent company. Some of our stories include affiliate links. If you buy something through one of these links, we may earn an affiliate commission. All prices are correct at the time of publishing.
View All Comments
Gmail continues to define email 15 years on