Lenovo is working on a ThinkPad with a foldable display

The unnamed device is a tantalizing taste of future PCs.
C. Low|05.13.19
@cherlynnlow

Sure, foldable phones are intriguing, but have you considered foldable laptops? Lenovo has clearly been thinking about the concept for awhile, and today, it's ready to unveil an early preview of its latest experimental efforts. At its Accelerate conference in Florida, the company showed off the world's first foldable PC prototype, and we got to check it out at a recent briefing in New York.

The as-yet-unnamed device is intended to be part of the ThinkPad X1 family as a laptop replacement. Although the prototype is still incomplete, Lenovo has plenty of time to refine it before its official launch in 2020. Since it's such early days, the company isn't sharing many details on specs, though I expect we'll get more information come CES. Lenovo has a lot of secrets it wants to protect, lest its competitors get inspired to borrow some features, but here's what we do know.

The foldable features a 13.3-inch OLED display that closes in upon itself. Like the Galaxy Fold, the ThinkPad prototype latches magnetically and leaves a small gap near the hinge. When open, the PC lays flat on the table, and I was impressed to see that the PC didn't have an obvious crease. Though, we'll see how long that lasts in real world use. Lenovo said it put in a lot of effort to make its patented hinge and display work better than existing systems, though it won't go into detail how. All the company's spokespeople would really say was that issues relating to the hinge, protection and screen durability "have all been addressed."

Though the hinge was sturdy, it was still easy enough to open and close. When shut, the device resembled a Moleskine notebook, due to its size and leather covering. It was also pretty comfortable to hold with one hand, and the company said it's targeting a weight of less than two pounds. Lenovo plans to include its stylus with this ThinkPad, which makes a lot of sense -- it felt intuitive to hold the slightly folded prototype with my left hand and write on it with my right like I would with a paper notebook. 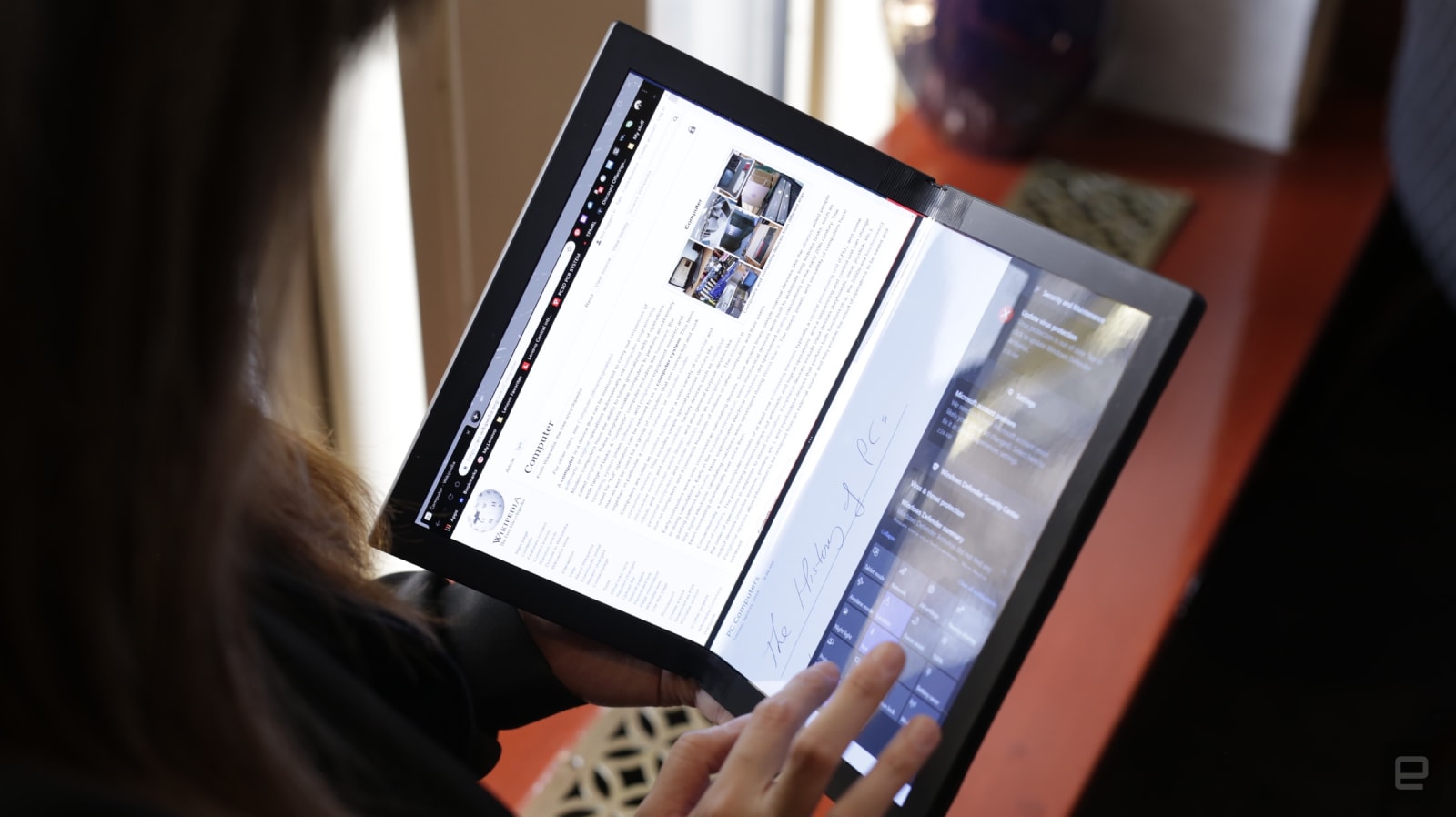 The pen was responsive, though I generally find Samsung's S Pen smoother. I felt some slight drag when scrawling letters on the 4:3 screen, but given we were only using an early prototype, I hope this will get better by the time the ThinkPad launches.

The device isn't just for you to use in your hands, of course. Like a conventional laptop, the foldable ThinkPad can sit on a desk with its screen propped up to face you. Lenovo integrated a kickstand into the PC's back so you can prop it up to use it in All In One mode. In this configuration, connect a Bluetooth keyboard and mouse, and you can use the computer as a 13-inch desktop.

You can also fold the screen and set it up at a right angle so the bottom half of the device rests on the table while the top half of the display faces you. This is Laptop Mode, and it devotes the lower third of the panel to an onscreen keyboard you can use to fire off emails and tweets. Using the machine this way felt familiar, and very similar to Lenovo's dual-screen Yoga Book laptops that replace keyboards with a touch-sensitive panel or e-ink display. It isn't an ideal setup to get a lot of work done, but if you need a proper keyboard you can always connect one over Bluetooth. 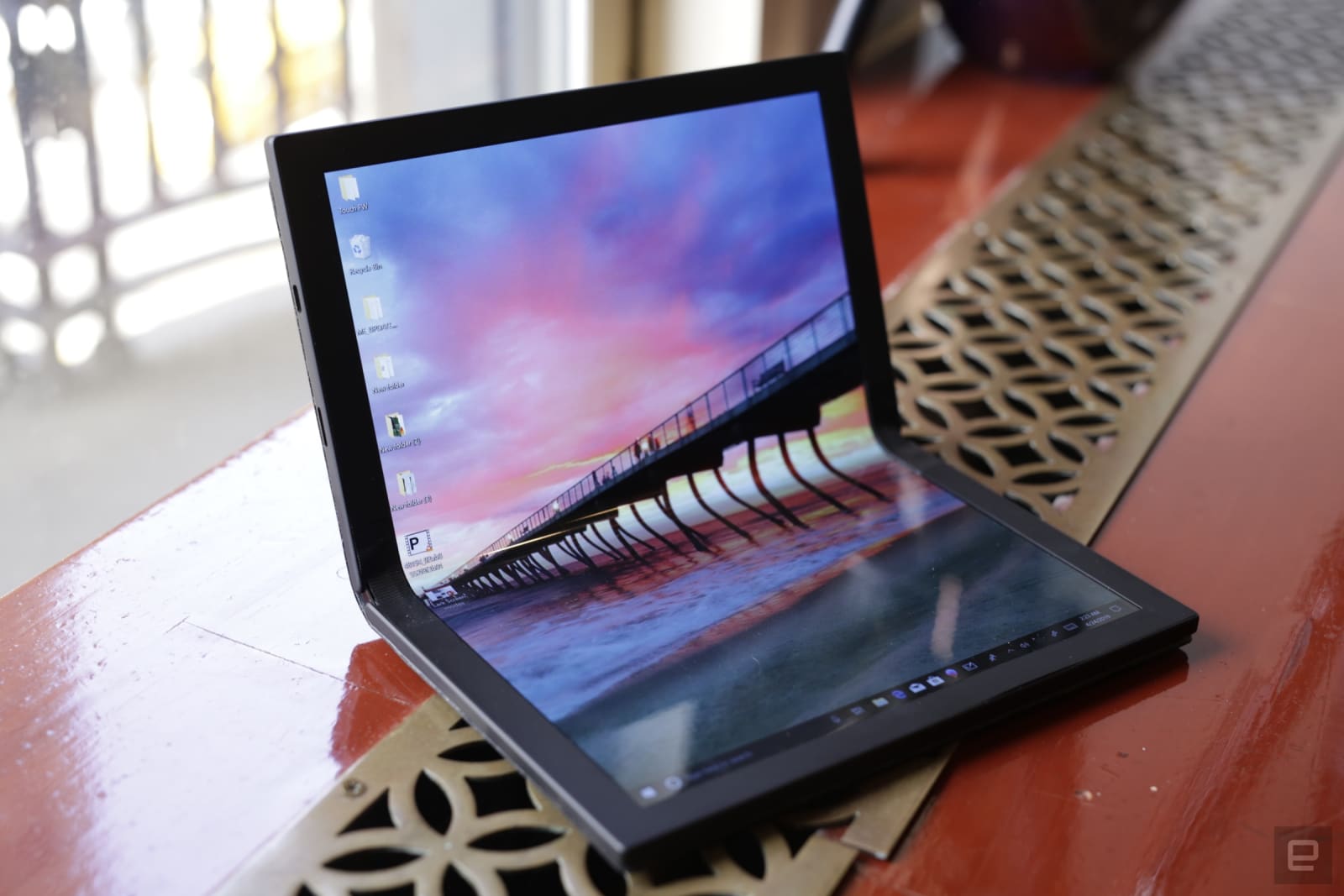 There will be other connectivity options available like USB C and A, but as Lenovo hasn't finalized the system, we don't know what the actual array of ports will be yet. The company did tell us that the foldable will pack an Intel chipset and that it'll be an always connected PC, meaning you'll have a cellular radio onboard. It's also targeting a day's worth of battery life, and will pack things like dual speakers and a Windows Hello-friendly pair of webcams.

There wasn't much else we could check out on the prototype -- we watched some videos and browsed a few websites and the display was as vivid as most laptops today are. Since the foldable is meant to be a ThinkPad X1 product, Lenovo said it will have to meet rigorous durability and quality standards, so it should be well-made by the time it launches. The company also hinted at some features that would make the device better for multitasking on the go, but did not want to share details that could tip off competitors. 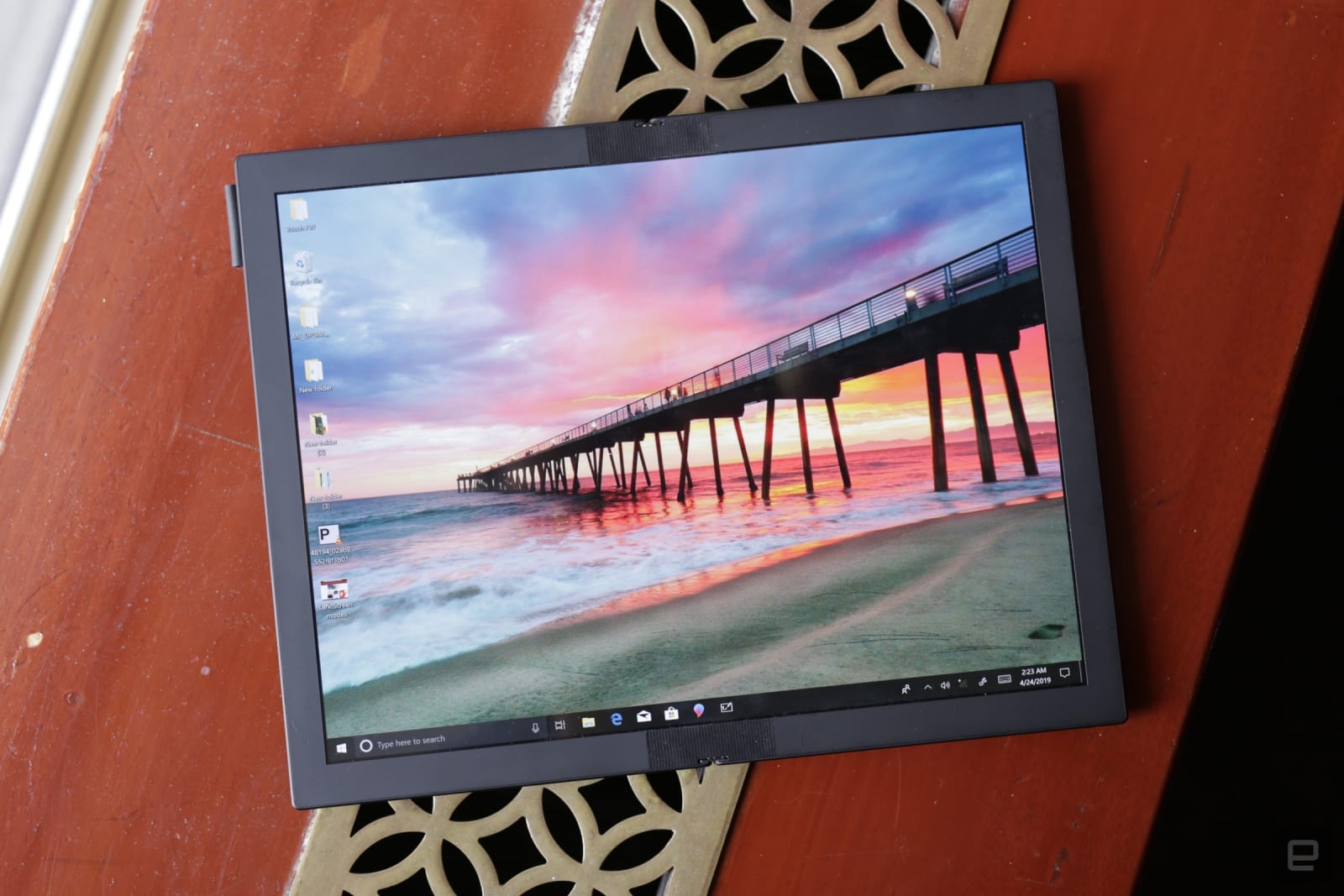 Though the prototype is basic, it offered a tantalizing taste of what a foldable PC could be. The design and bendable display were eye-catching and I love the idea of a laptop the size of a paper notebook. Without giving it a thorough try out in the real world, though, it's hard to judge how well such a format might actually work. I'm not sold on the durability of the display and the utility of a laptop without an attached physical keyboard. Lenovo has until next year to make a foldable that's as capable and useful as it is unique. In the meantime, the company's competitors have plenty of time to catch up and offer their own takes on the foldable PC. Hopefully, that means we'll be checking out an intriguing slate of new laptops with bendable screens soon.