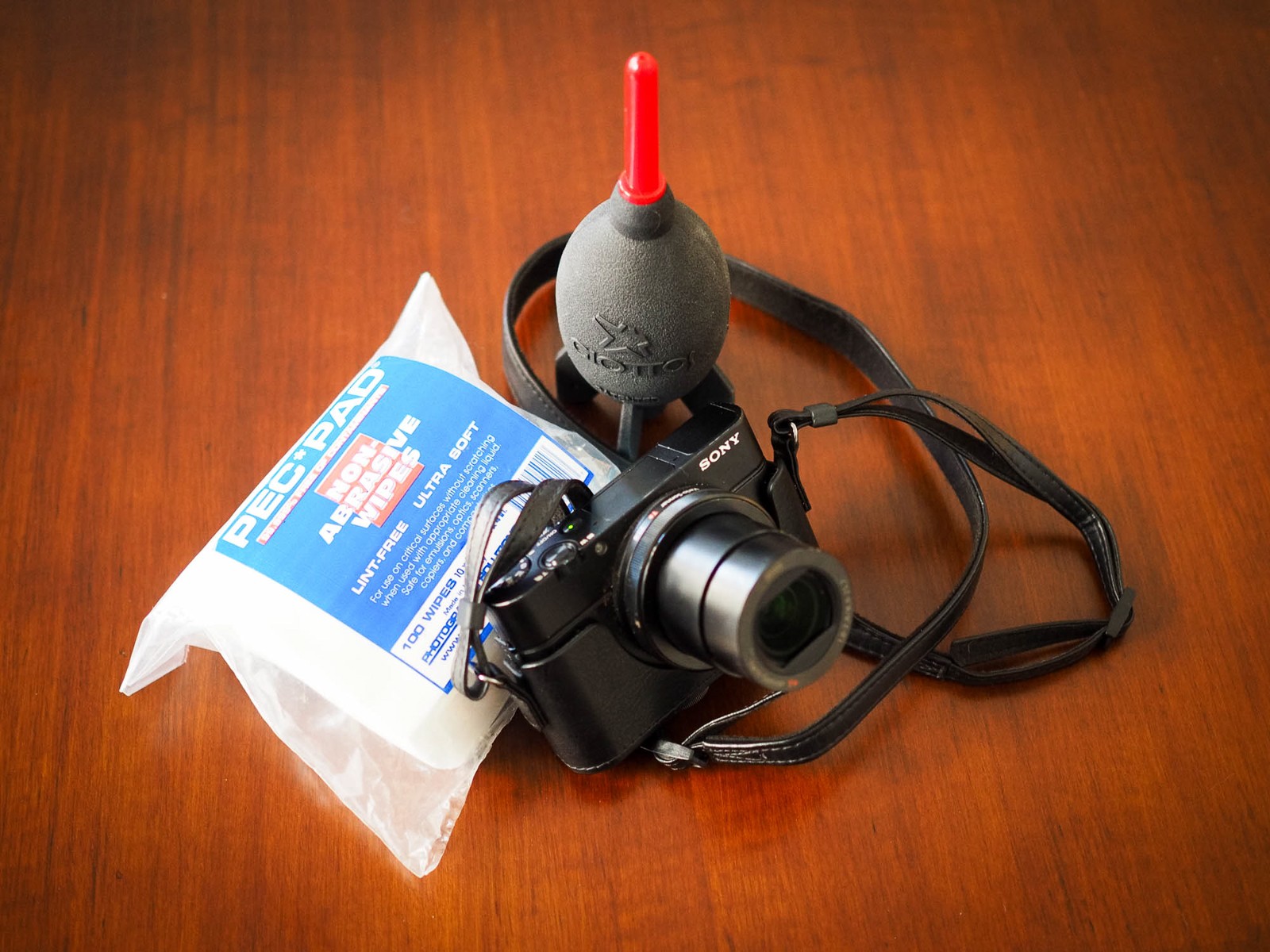 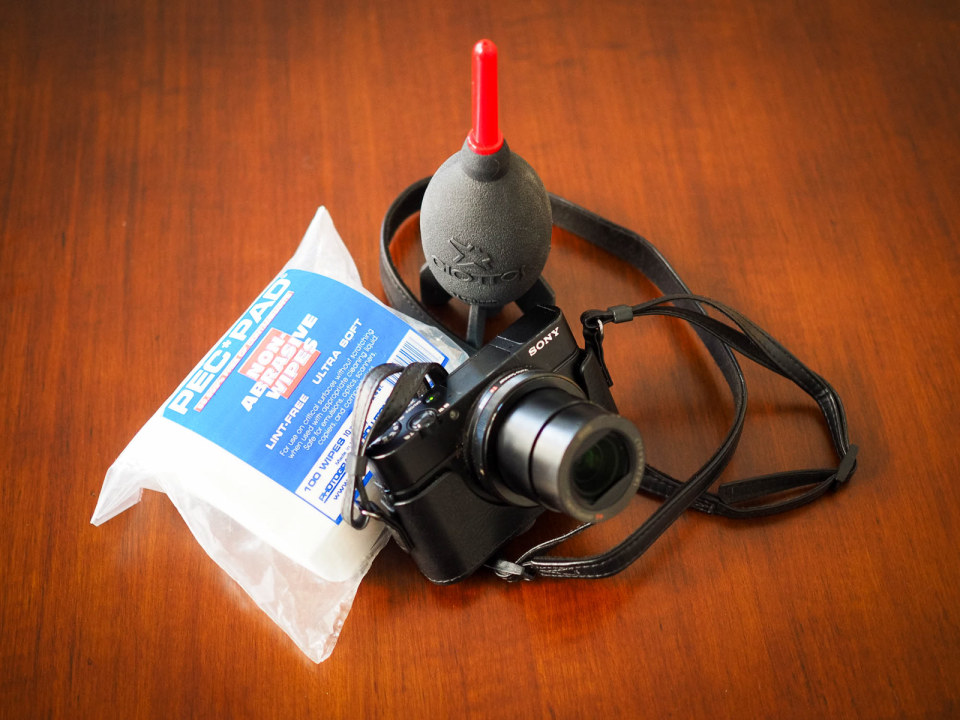 By Tim Barribeau and Ben Keough

This post was done in partnership with Wirecutter. When readers choose to buy Wirecutter's independently chosen editorial picks, Wirecutter and Engadget may earn affiliate commission. Read the full guide to camera cleaning gear.

A camera, a lens, a memory card, and a decent eye are all you need to take a good photo. But you need some other things if you want to keep your camera and lenses in good shape, since photography isn't a sterile business. Unless you're shooting in a studio at all times, dust, mist, mud, rain, sea spray, and other outdoor filth can easily dirty your camera. And that can affect the quality of your photos.

For cleaning the front element of your lens, we recommend the Giottos Rocket Air Blaster, a LensPen, a set of PEC-PAD wipes, and a vial of Eclipse cleaner. With these items in your bag, you should be prepared for anything the world can throw at your camera.

The best thing you can do to keep your lenses from getting dirty and scratched is to take smart preventive measures.

The first step is to make sure to keep lens caps (front and rear) on your lenses at all times when you're not using them. For more permanent protection, you can screw a basic UV filter onto the front of each lens, not for the UV protection—most modern lenses have that built into their coatings—but to help safeguard against drops. The idea is that if you fumble your camera and it lands on the lens (or your tripod falls and takes the camera with it), the filter might bear the brunt of the damage and leave your lens unscathed. But cheap filters can degrade image quality, so we recommend using a reputable brand such as B+W, Hoya, or Tiffen. You can grab one of their basic UV filters for as little as $15—a cheap insurance policy for an expensive lens.

Nikon once famously warned against using your breath to fog up a lens for cleaning, but you probably won't actually hurt anything by doing so. It's a method that has served photographers well since time immemorial. (And Nikon later retracted the warning.) But using a lens-cleaning solution such as Eclipse and a disposable cleaning pad will probably get your lens cleaner and cut down on the risk of scratching the coating.

Last but definitely not least, be as quick as possible when swapping lenses, and if you're outside, try to do it close to your body with the wind to your back. Each time you change your lens, you expose your camera's sensor, mirror (in the case of DSLRs), and other internals to dust and gunk. If your camera has a built-in sensor-cleaning tool, set it to run every time you turn it on or off. That should take care of most particles that find their way inside.

The front element of your lens is the part that needs cleaning most often. It gets exposed to the most wear and tear, including errant raindrops, fingertip smudges, and dirt and dust.

For a good, step-by-step guide to cleaning your gear, we like these in-depth articles by Roger Cicala at Lensrentals and Bob Atkins. We lay out the basics here, but they'll give you more info about how the pros do it.

Your primary tool should be a simple puffer like the Giottos Rocket Air Blaster, a tool that's universally loved (well, except among TSA agents). It's basically a handheld bellows—a big rubber tube with a nozzle at one end and a one-way valve at the other. The blaster sucks air in through the valve, you squeeze, and it shoots the air out the nozzle at high speed, hopefully dislodging whatever is sitting on your lens. Unlike compressed-air canisters (which often contain an accelerant), the Rocket Air Blaster uses only air, so it won't leave residue on the surface you're trying to clean. That means it's also a great tool for contact-free sensor spot-cleaning in a DSLR or mirrorless camera.

If you have sticky stuff on your lens that won't come off with an air puffer, the next step is to use a LensPen. These double-ended cleaners are affordable, gentle, long-lasting, and available in a variety of shapes and sizes.

On one end the tool has a brush designed to knock away loose particles, and on the other it has a carbon-charged felt tip. The carbon end absorbs oil and other particles that may have settled on your lens. Each time you cap the pen, it recharges the felt tip with more carbon, letting you use it again to soak up even more grease and fingerprints. As Lensrentals's Roger Cicala points out in his guide, there's lots to like here:

"We like several things about them: no liquid residue, simple and easy to use, gets into the edge of the lens better than most other methods. And out of the office, they're small and easy to carry around. They come in a variety of types and sizes and we use a number of different ones. Smaller ones are perfect for camera viewfinders, angled edges are great for lenses with deep edge recesses like fisheyes, etc."

But he goes on to point out a crucial caveat:

"The most important point, though, is to not overuse a LensPen. Once the felt on the tip gets worn, the rubber underneath doesn't clean, and can leave marks if used with too much pressure. We get, at best, 100 cleanings from a Lenspen, but that varies by which brand we're using and how big the lenses are being cleaned."

We talked to Cicala about the differences between brands of pens, and he described the situation as murky. LensPen sometimes also makes pens for other companies to spec, and then there are cheap Chinese knockoffs. Cicala added that "screw-on-cap lens pens don't last very long or work as well as pop-off-capped ones." Generally speaking, our experience says that you can trust the LensPen brand.

One last tip: After you use the pen, be sure to give the lens another quick puff of air with your Rocket Air Blaster to blow off any carbon particles that might still be clinging to the glass.

If neither the air puffer nor the LensPen can get the job done, it's time to move to more hands-on methods, such as a cleaning cloth. For this purpose, we like PEC-PAD disposable lint-free wipes. They're safe, convenient, and very, very cheap. Some folks say that a clean microfiber cloth does just as good a job of removing tough gunk, but the problem is that if you reuse such cloths, it's easy for debris to get trapped in the material (even if you wash it between uses) and scratch the glass. In general, we don't like recommending one-time-use items, but this is one instance where it makes sense.

You can try cleaning your lens with a dry PEC-PAD, but you'll probably need lens-cleaning solution to really get the gunk off. Eclipse cleaner is the go-to brand for most experts. It takes only a tiny bit to remove most foreign material, it dries quick, and it doesn't leave streaks on glass. Paired with the PEC-PADs, the Eclipse solution is enough to take care of virtually anything that might reasonably end up on your lens. Put a drop or two on the pad, and then clean from the center of the lens outward in a circular motion. Throw the pad out after each use.

Alternatively, you can make your own lens-cleaning fluid, using either 99 percent pure isopropyl alcohol or a mixture further diluted with water. Some people recommend adding a drop of Dawn dish soap to the mix (which people apparently use to clean telescope elements). For further discussion of various cleaner types and formulation, see this post from a DPReview forum member who tested a number of them head to head.

If you want ultimate convenience and don't mind paying a little extra, you can use individually packaged, premoistened wipes, such as Zeiss Lens Cleaning Wipes. While some people like the Zeiss wipes, others accuse them of leaving streaks, though a swipe with a microfiber cloth will clear away any visible residue left when the Zeiss wipes' liquid evaporates. Regardless, since they're individually packaged, they're virtually guaranteed to be free of foreign particles that might scratch your lens coating. That makes them the safest option around. 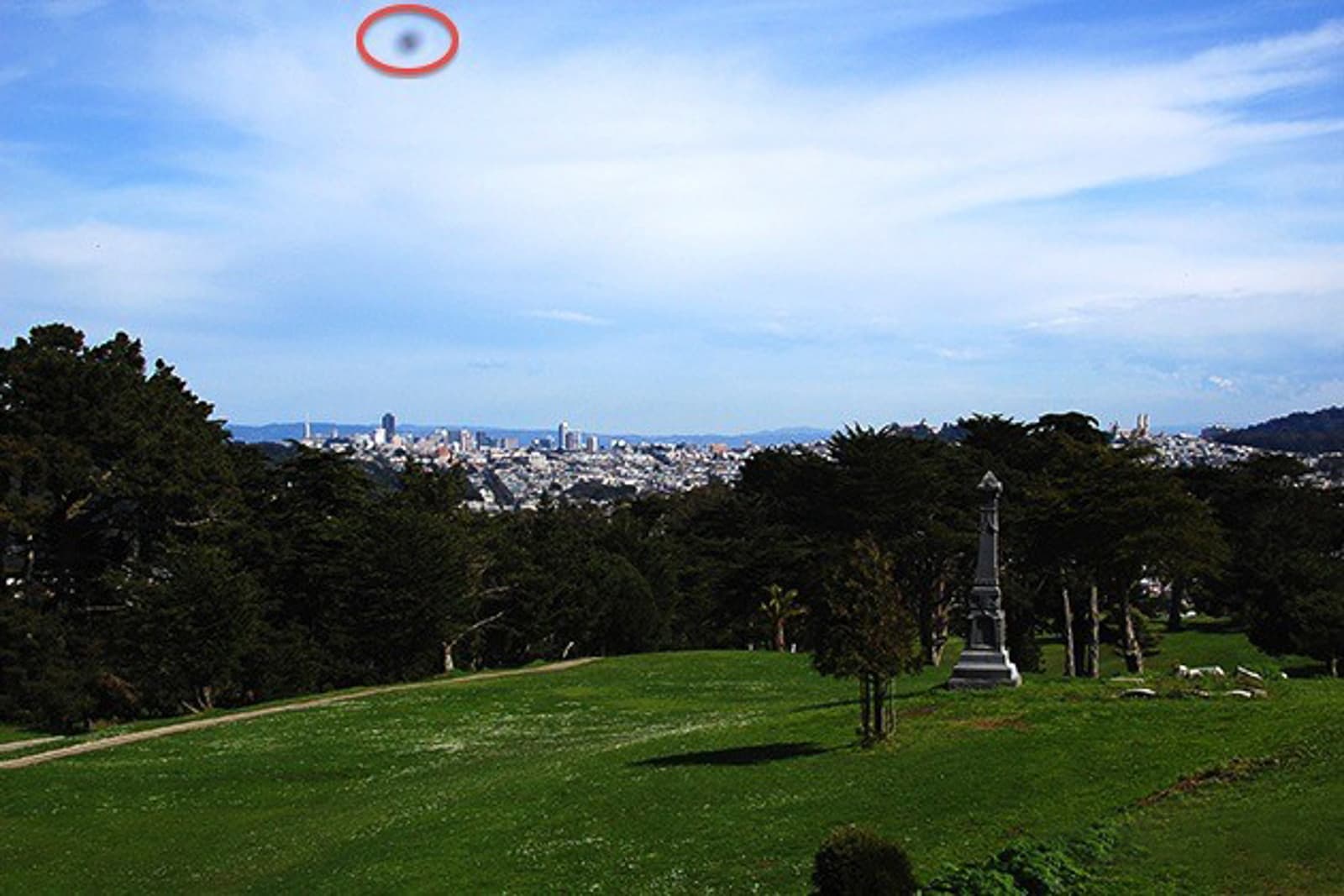 Dust on your sensor will show up in exactly the same spot on every photo, no matter how clean your lens is. Photo: Tim Barribeau

It's perfectly possible to clean your own sensor, but we don't recommend it. The margin for error is simply too small, and you could easily end up causing hundreds of dollars of damage to your camera if your hand slips during the highly stressful process. Unless you're very confident in your own abilities, this is one situation in which it would be safer and smarter to leave the repair to the professionals. Most brands provide mail-in cleaning services, and many have authorized repair centers in cities across the US and Canada that will do the job.

Dealing with the rest of the camera

All of that takes care of the super-sensitive areas of a camera, but what about the rest of it, such as grime on the LCD or dirt on the buttons?

For the plastic, rubber, and metal of the camera body, you can be a bit more cavalier. Chamois and microfiber cloths work well. So does a soft toothbrush for getting into cracks. Use basic, gentle cleaners—warm water first, and if that doesn't work, diluted isopropyl alcohol. Avoid caustic cleaners that include bleach and ammonia. Generally speaking, this process should be pretty straightforward.

To clean your camera's LCD and viewfinder (be it optical or electronic), you can use the same wipes and lens-cleaning solution we recommend above.

In this article: cameras, gear, partner, syndicated, thewirecutter, wirecutter
All products recommended by Engadget are selected by our editorial team, independent of our parent company. Some of our stories include affiliate links. If you buy something through one of these links, we may earn an affiliate commission.