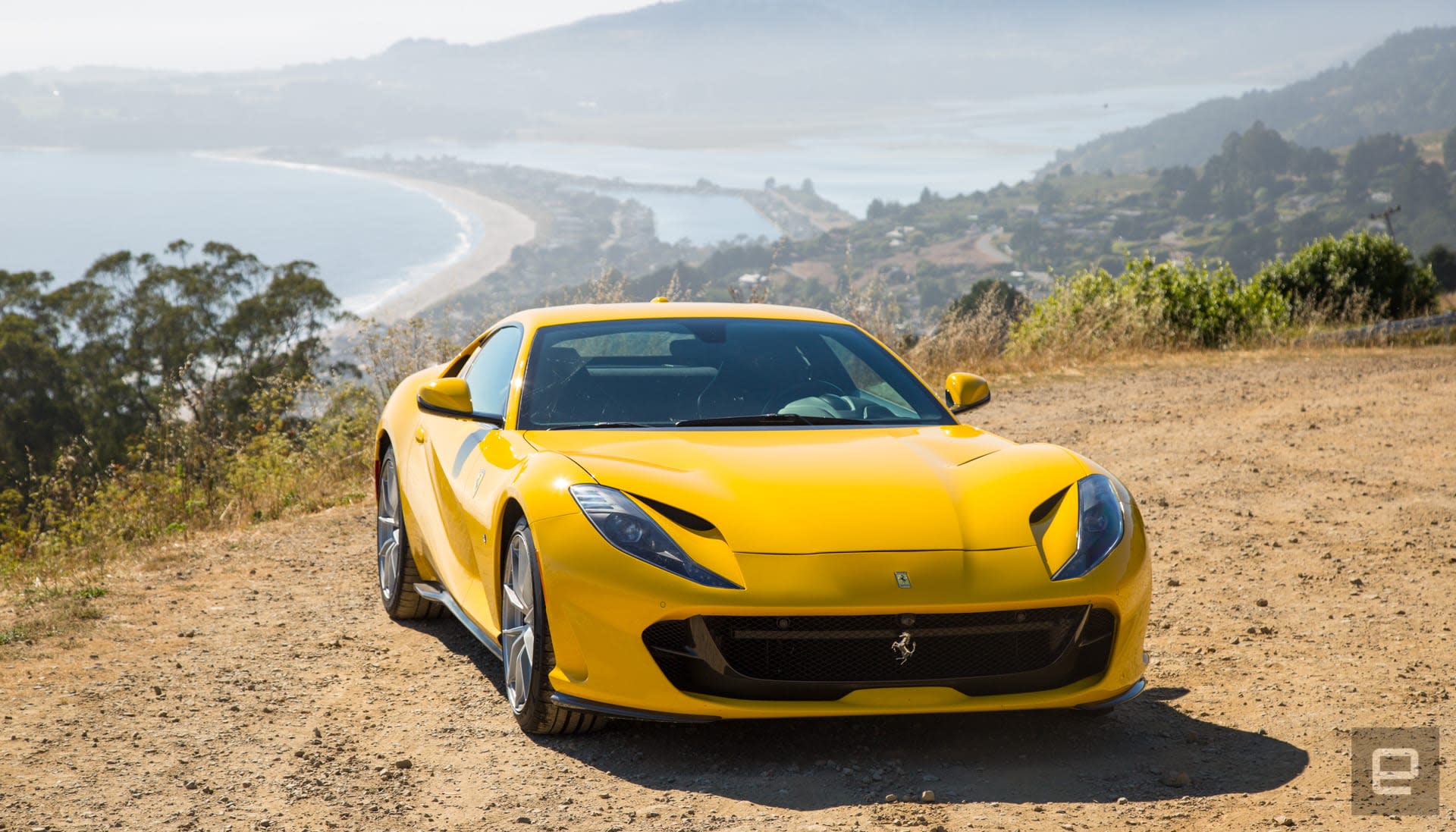 Every shift of the gears unleashes a burst of torque as I link corners on the mountain roads of Northern California. I hit the brakes hard as I head into a curve. I'm not even sure I needed to brake. The wheels are firmly planted to the asphalt and I power out of the apex and on to the next turn. I'm tapping into maybe 50 percent of the Ferrari 812 Superfast's ability as a supercar and it's outstanding. 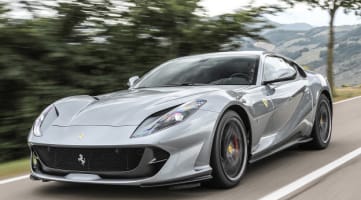 The Ferrari 812 Superfast is a production car, but really, it's a race car. A V12-powered beast that carves up roads without breaking a sweat. It's the pinnacle of the supercar genre. It's fast, expensive and when you look at it, you want one in your home -- even if it's just as a poster on your wall. You can even look past the sort-of-ridiculous name. Yes, it's superfast, but did they really have to call it that?

That speed is delivered by a gigantic 6.5 liter V12 that yields an impressive 789 horsepower and 529 pounds of torque. The air intakes on this car are larger than the engine on my first car. They're like giant arms reaching out to the world sucking up the sky and producing a dizzying amount of raw power. A V12 engine needs to breathe, and those intakes make that happen. The enormous powertrain pushes the 812 Superfast from zero to 62 miles per hour in 2.9 seconds. Plus, you get 80 percent of the car's torque at 3,500 RPM. That means you get most of the power without having to rev the engine too high. That's why there's a jolt at every gear change. It's intoxicating and would be frightening if there wasn't a lot of aerodynamic wizardry keeping the car stuck to the road. 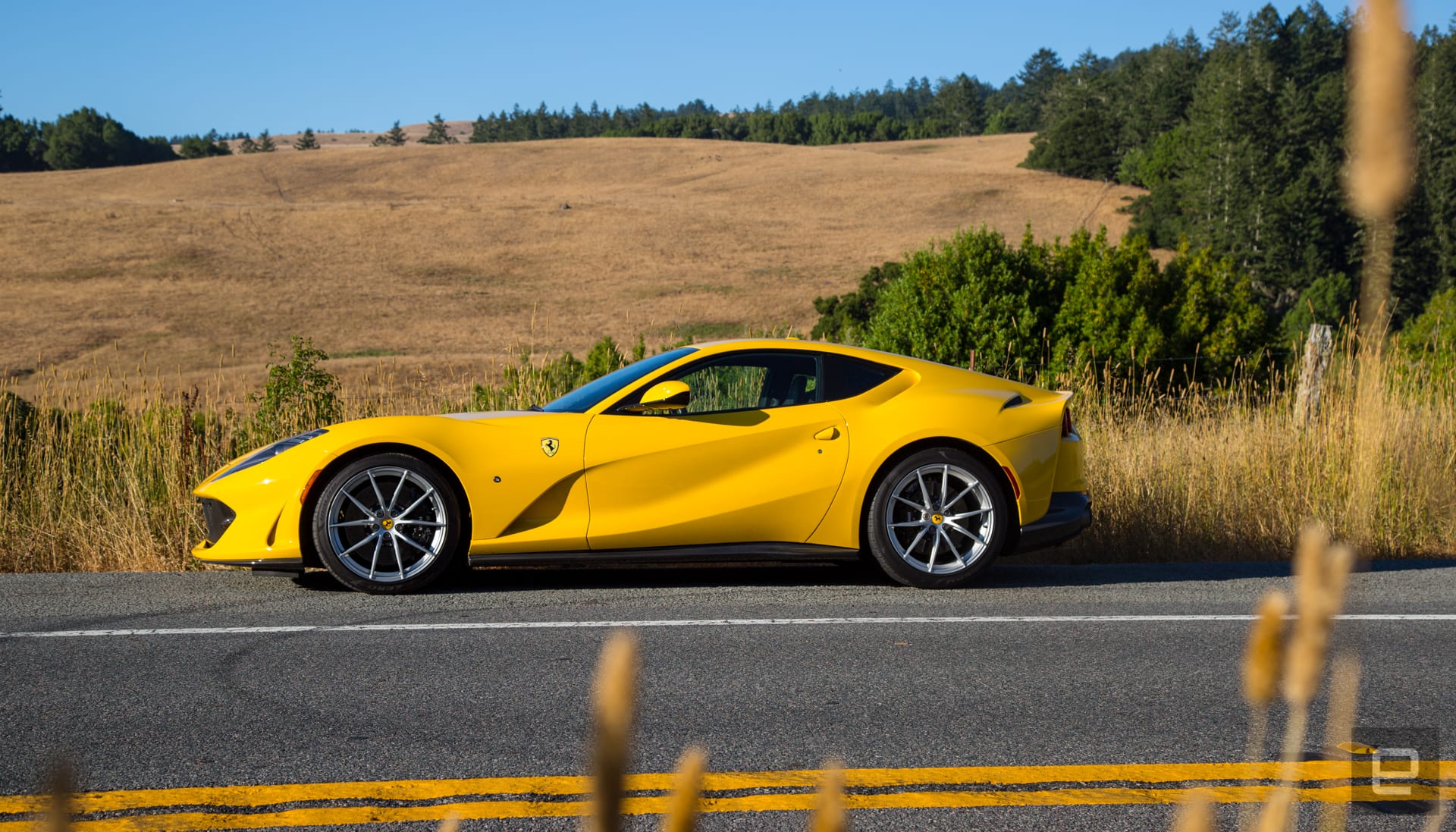 Every scoop, hole, vent or curve on the Superfast serves a purpose, and most of the time it's to create downforce. If automakers didn't use air to push a car down, as they sped up, they would just take off and leave the ground.

In addition to passive aerodynamics, the Superfast has two elements under the vehicle that open and close to reduce drag. The only problem is that they only come into play when the car hits 112 miles per hour. So I actually have no idea how well it works because I never got close to 112 miles per hour. I mean, I'd like to, but laws and safety prevent me from testing that feature.

Still, even without time on the track, the Ferrari does nothing to hide its abilities as a rocketship with four wheels. When you're behind the wheel, it's magical. The only time I was able to get the backend to release was around a very slippery turn. At that point, Ferrari's Electric Power Steering (EPS) system kicked in and gently helped me right the ship. It wasn't overbearing in its adjustment. But more like a welcome nudge to get all four wheels solidly going in the correct direction.

It helps that all four of those wheels are turning. Throw in some finely tuned suspension and every movement is an invitation for the car to head in a new direction. To say it's twitchy is an understatement. It took me about 15 minutes to realize that your movements are immediately being put into action by the car. Sure, I'm not doing 112 miles per hour, but I'm now part of the car and the car is now part of me.

On rough roads, the car's suspension was less jarring than anticipated. It has a bumpy-road mode that smooths out neglected infrastructure. It's nowhere near what you get in a luxury car, but it's not going to rattle your teeth out of your head. 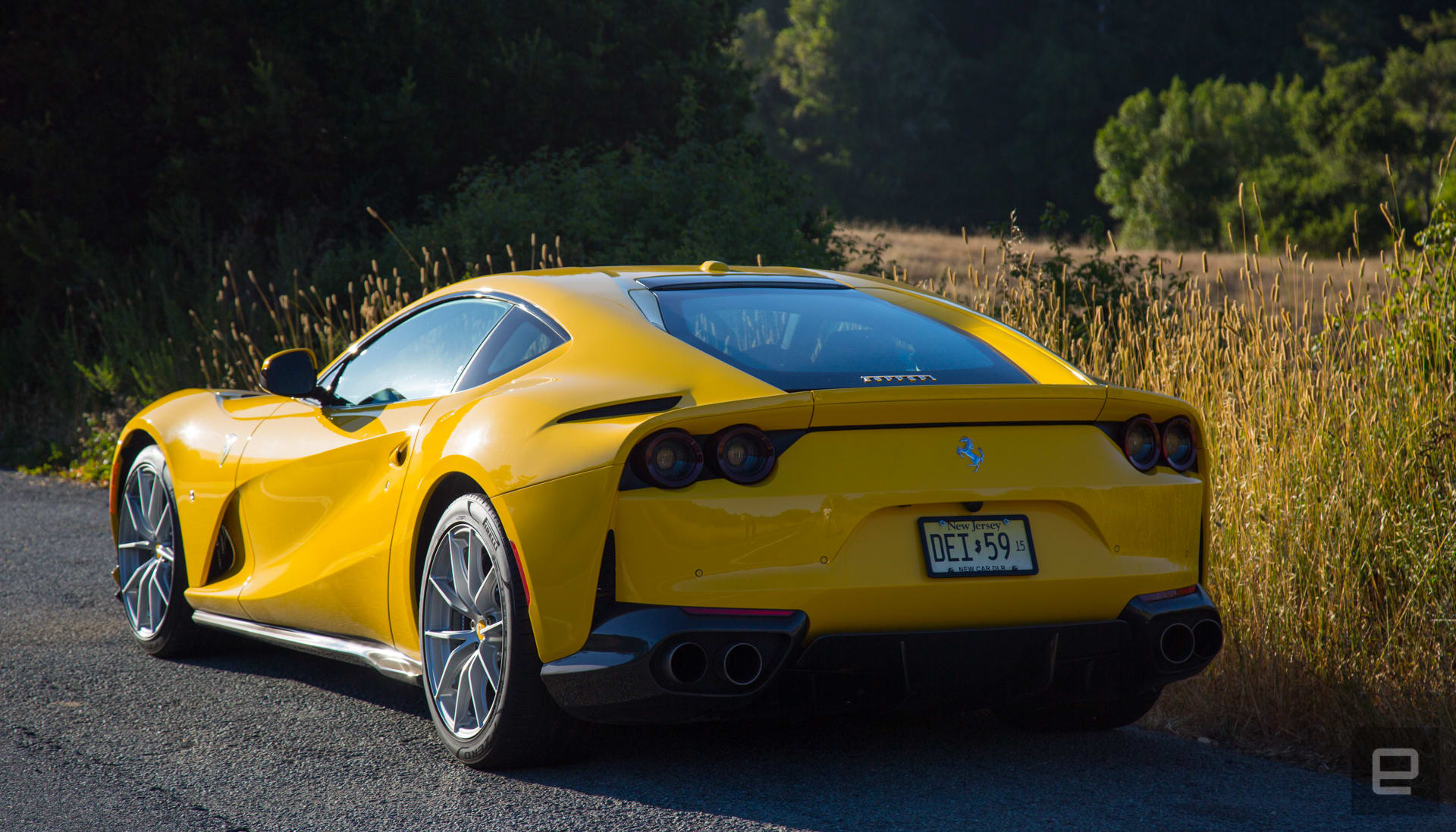 Oddly, the hardest part about driving this car was driving it slowly. Anything under 35 and you're feathering the accelerator trying to get the car to behave. It took a while to get used to. But if you owned this car and just wanted to cruise around town, you'd have a mostly comfortable ride.

Inside, the Superfast is pure Ferrari -- with a steering wheel that feels like it was pulled from an F1 car. It's overwhelming at first, but after half a day I figured out what all the dials, knobs, and switches actually do. One thing I'm a fan of (but still can't bring my brain to understand) are the turn signals on the steering wheel. Instead of a stalk, the left signal is on the left side of the wheel and the right is on the right. It makes sense -- and when I remembered they were there, it was great. But most of the time my lizard brain reached for the missing stalk.

In addition to forgoing indicator levers, Ferrari did away with the center dash-based infotainment system. Instead, the drive has two screens in the dash cluster on either side of the speedometer that serves that purpose. The screen on the right is for navigation, media and phone-related items. On the left side is information about the car, including the status of various elements. For example, it'll tell you when the tires are warm enough for spirited driving.

What's fun and weird is that the passenger gets their own small touchscreen. With it, they can see how fast the car is going, check on the progress of a route and control the music. While I, personally, believe that the driver should listen to whatever they want, it's an interesting feature that I found weirdly cool. But on the driver's side, some of the infotainment is less fun. 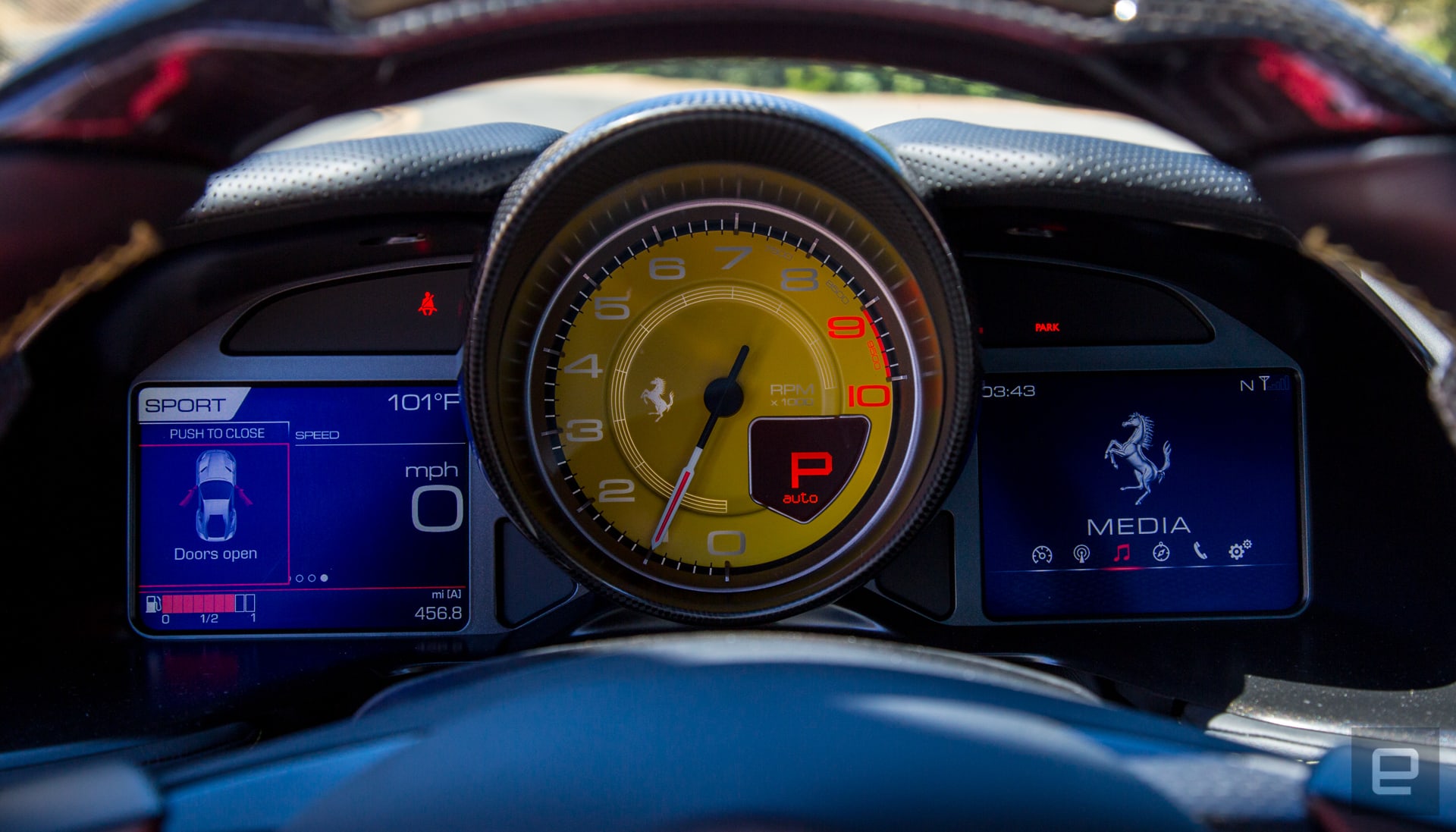 Like most supercars, the part of the infotainment system that deals with navigation is lacking. Everything is controlled with a knob, and inputting addresses is a frustrating affair. The voice assistant is script-based, and after a while, I just gave up. Is it a deal-breaker? No -- not even close. Ferrari states that it supports Apple's CarPlay. I would have tested that but, unfortunately, my iPhone wasn't working correctly.

As a person too cheap to upgrade his iPhone 6S, I should be appalled at the Superfast's starting price of $337,000. Unsurprisingly, Ferrari sent me a test vehicle with all the bells and whistles, including a lot of carbon fiber, which bumps the price up to a whopping $474,500. So, yeah, it's basically a superexpensive race car that you can drive around, and I'm oddly fine with that.

Even with all that money, the interior of the Superfast is minimalistic. It's a stylish suite surrounded by power. That design ethos also extends to the transmission controls. There are only two buttons for the gearbox: reverse and auto. The eight-speed gearbox is controlled almost entirely by the paddles behind the steering wheel.

There's also a PS (Partenza Sportiva) button that puts the vehicle in launch mode so you can feel the totality of the power under the hood. If you do buy one of these cars, use this feature only on a closed track. It's already internal-organ-displacing fast without initiating a full-blown takeoff. Safety first -- even in Ferraris. 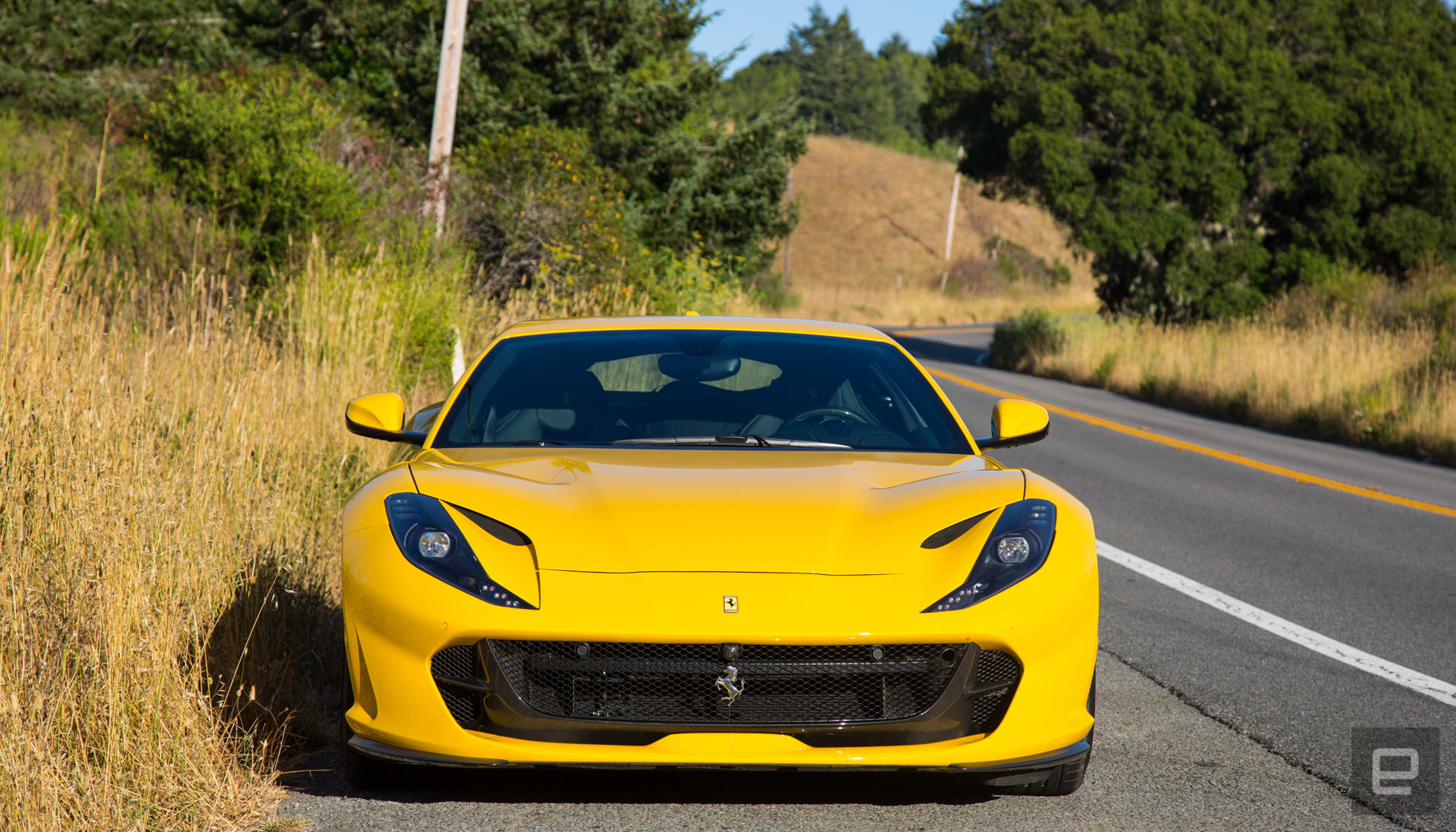 The Ferrari 812 Superfast is a magnificent car that hits all the marks for a proper supercar. It's beautiful, it's fast and it's prohibitively expensive. It's got everything you'd want from a vehicle that costs more than most homes. Even with a funny name.