This marks the first time Nike is sharing its shopping tech with a retail partner.
E. Alvarez|08.09.19
@abcdedgar

Over the past few years, Nike has heavily invested in making its stores more tech-oriented. A big part of that strategy is integrating its Nike app with the company's physical spaces and trying to make it easy for shoppers to do things like instantly pay for product and scan items to check if they're in stock. You can do all of that in the application, at the Nike store, without having to interact much with store associates. Nike says its customers love these type of features so much that it is now bringing them to Foot Locker, one of its biggest retail partners. The Foot Locker Washington Heights Community Power Store, located in uptown New York City, marks the first time Nike's shopping tech will power (part of) a store that isn't one of its own.

While Foot Locker is still selling apparel and sneakers from other sportswear brands at its new location, including Adidas and Puma, the partnership with Nike does make gear from The Swoosh stand out. For instance, throughout the store, you'll see signs next to Nike products that tell you to download the NikePlus app to "scan and learn." That'll let you use the app to scan barcodes on items and then, within seconds, view available sizes and colors at this Foot Locker store. Additionally, you can use the Nike app to reserve items directly from the company and pick them up at the Foot Locker. 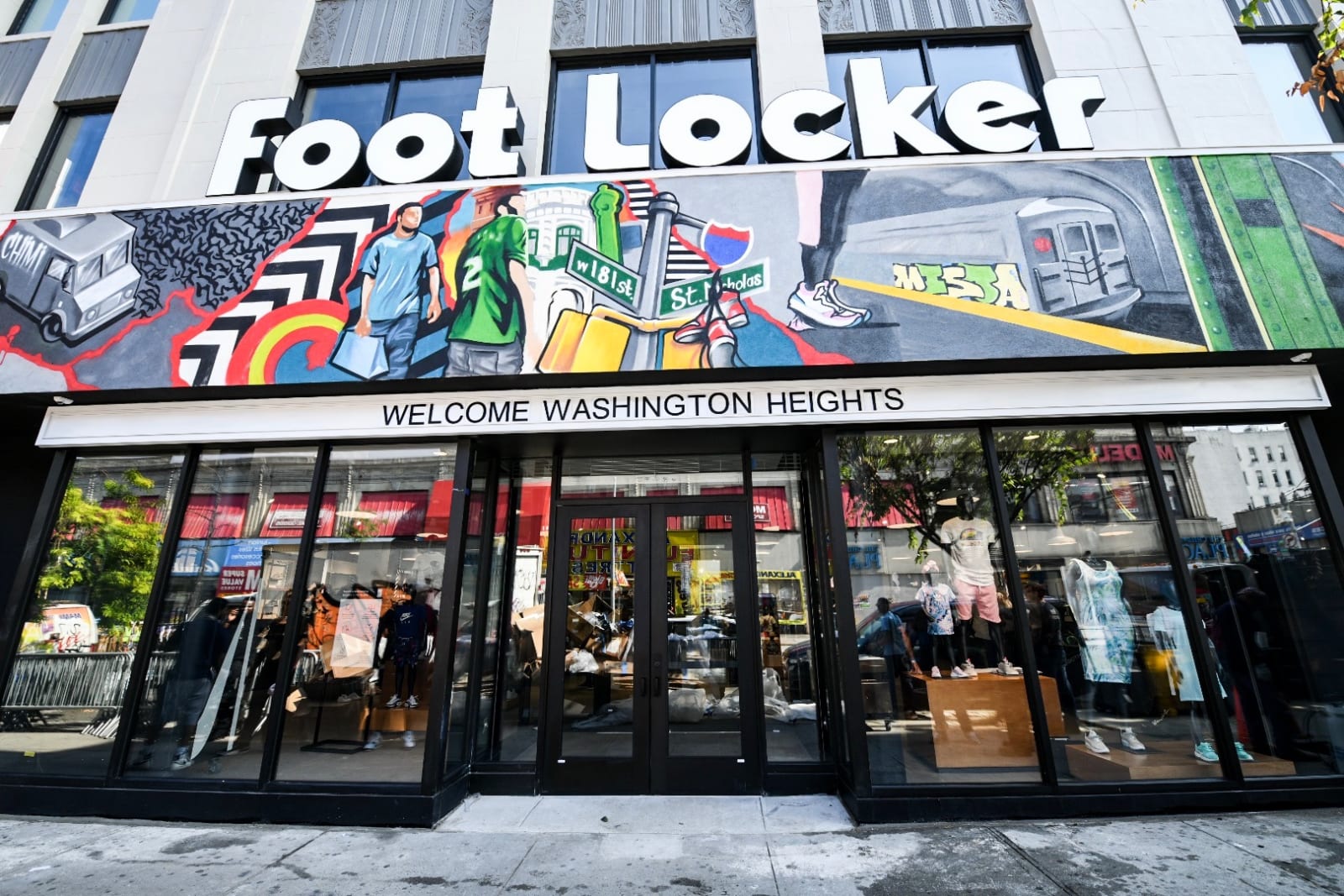 But that's not it. There's also Nike's Unlock Box, a vending machine that lets you scan a QR code attached to your Nike+ profile and get free swag every few weeks. When I went to the new Washington Heights Foot Locker, a two-level, 10,000-square-feet space, the Unlock Box had Air Jordan pins and Nike sunglasses and USB power packs -- though what's in the vending machine will change from time to time. It's the same concept Nike's shown off at a few of its other stores, intended to drive people back regularly into its store, of course.

Perhaps the biggest highlight of the first Nike-powered Foot Locker, however, is the ShoeCase (pictured in the lede image). Like the Unlock Box, you'll have to scan your NikePlus code to use it, but this one will enter you into a real-life, real-time raffle that can give you the chance to buy limited-edition sneakers. For those of you who are into kicks, it's basically the physical version of Nike's The Draw, and what Nike sells through it will refresh regularly. So one day it might be a pair of Air Max, another day Air Jordans will be displayed on Nike's ShoeCase. Once you scan your NikePlus pass, the machine rotates the shoe and in few seconds prints out a ticket to let you know if you won and can buy the sneaker.

Both Nike and Foot Locker told Engadget this collaboration has been in the works for about two years, adding that right now it's about testing and learning. Both companies aren't closing the door to doing this at more stores across the US, although that will depend on consumer demand for these particular type of experiences. So far though, based on what Nike has been doing at its stores, the sportswear giant is confident that these app-meet-retail efforts will be appealing to people. Not only because it makes it easier for them to shop at physical locations, but because it's also using data to know what local customers want to come in and shop for.

As for Foot Locker, the retailer is making use of its own digital services. If you buy something from its app or site, for example, you can also pick it up in-store -- the same way you can with the NikePlus app. For now, the NikeShoe case will only be at the Foot Locker Washington Heights store, but don't be surprised if you start seeing it at other locations soon.