It uses an LCD screen and features a pair of wide and extra-wide cameras.

It's time for another Apple event, and at the Steve Jobs theater in Cupertino, the company blazed through a ton of new products from gaming and streaming services to iPads and Watches. But as is usually the case each September, we're also getting to see new iPhones. When the iPhone XR launched last year, it was a less-expensive version of the iPhone X meant to reach a wider audience. In other words: people less willing to spend a thousand bucks on a phone. It's become the most popular smartphone in the world, according to Tim Cook. To keep wooing that sizable segment of shoppers, Apple is announcing a new iPhone 11.

The iPhone 11 features an anodized aluminum and glass design and adopts a 6.1-inch LCD TrueTone display, similar to the XR's "Liquid Retina" panel. Possibly inspired by companies like Huawei and Samsung delivering flagships in gorgeous finishes, Apple is also offering the iPhone 11 in six attractive shades including Product (Red), lavender and green.

It has two rear cameras wrapped under that glass -- one is a 12-megapixel sensor while the other a 12-megapixel ultra-wide camera for expansive landscapes. The camera app UI has also been tweaked to show you what the wider lens sees while you're framing your shot with the main camera. Apple also updated its imaging algorithms to better process skin tones, highlights and shadows, as well as offer optical zoom and portrait effects via the dual cameras.

There's also a new Night mode that comes on automatically when the iPhone 11 determines it's "dark enough" and based on samples Apple showed during its keynote, the feature is comparable to Google's Night Sight. It opens up the lens for longer periods when there's no movement in the scene to let in more light, then uses noise reduction to clean up the resulting image.

Apple is also making it easier for you to record a video when you're in still image mode with a feature it's calling QuickTake. You can just hold down the shutter button in picture mode to record a clip. 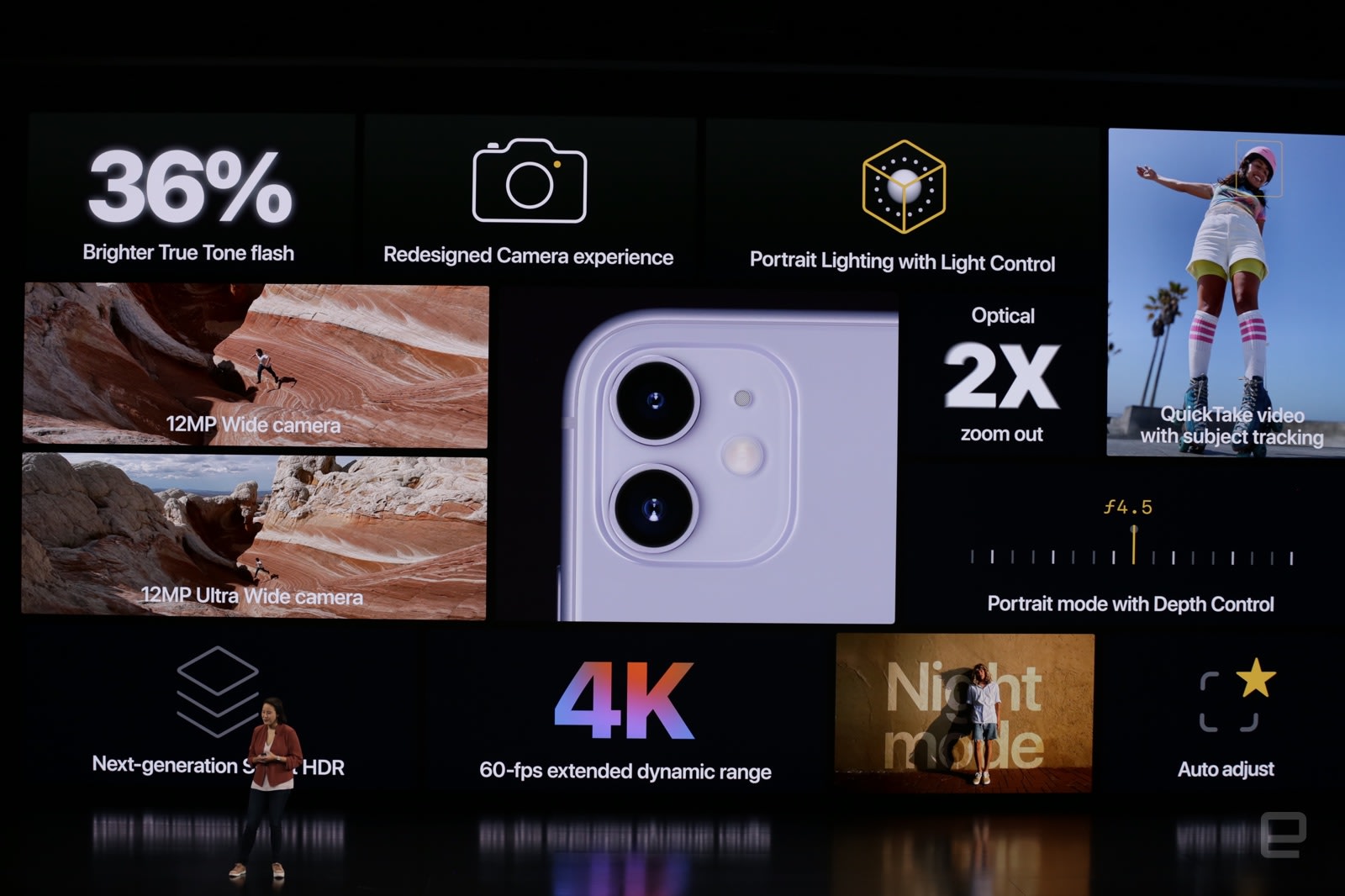 Around the front, the TrueDepth camera has been updated with a 12-megapixel sensor for wider group selfies. Apple also introduced a new Slo-Mo selfie feature which sounds like too much even for me, someone who takes about 300 selfies a day.

The iPhone 11 is powered by the A13 Bionic processor, unsurprisingly, which Apple says is even more powerful than the chipset on the iPhone XR (A12 Bionic). Graphics are similarly competent, with Apple claiming once again this is the fastest processor in a smartphone. The A13 Bionic has a low-power design that makes it more power-efficient, the company said, with more than 8.5 billion transistors.

In addition to all these upgrades, the iPhone 11 continues to deliver longer battery life than the iPhone XR -- a whole hour more, according to the company.

With all these comparisons to the iPhone XR, it's clear to see where Apple sees the iPhone 11 in its lineup. Plus, it'll cost $699, which is $50 less than the XR cost at launch last year. It's also $300 less than the iPhone 11 Pro, which makes its position clear. Apple is keeping the iPhone XR around at a starting price of $599. Pre-orders for the new phones begin this Friday (Sept. 13th) at 5am PT and will be available September 20th.

All products recommended by Engadget are selected by our editorial team, independent of our parent company. Some of our stories include affiliate links. If you buy something through one of these links, we may earn an affiliate commission. All prices are correct at the time of publishing.
View All Comments
The iPhone 11 is Apple’s colorful new handset for the masses