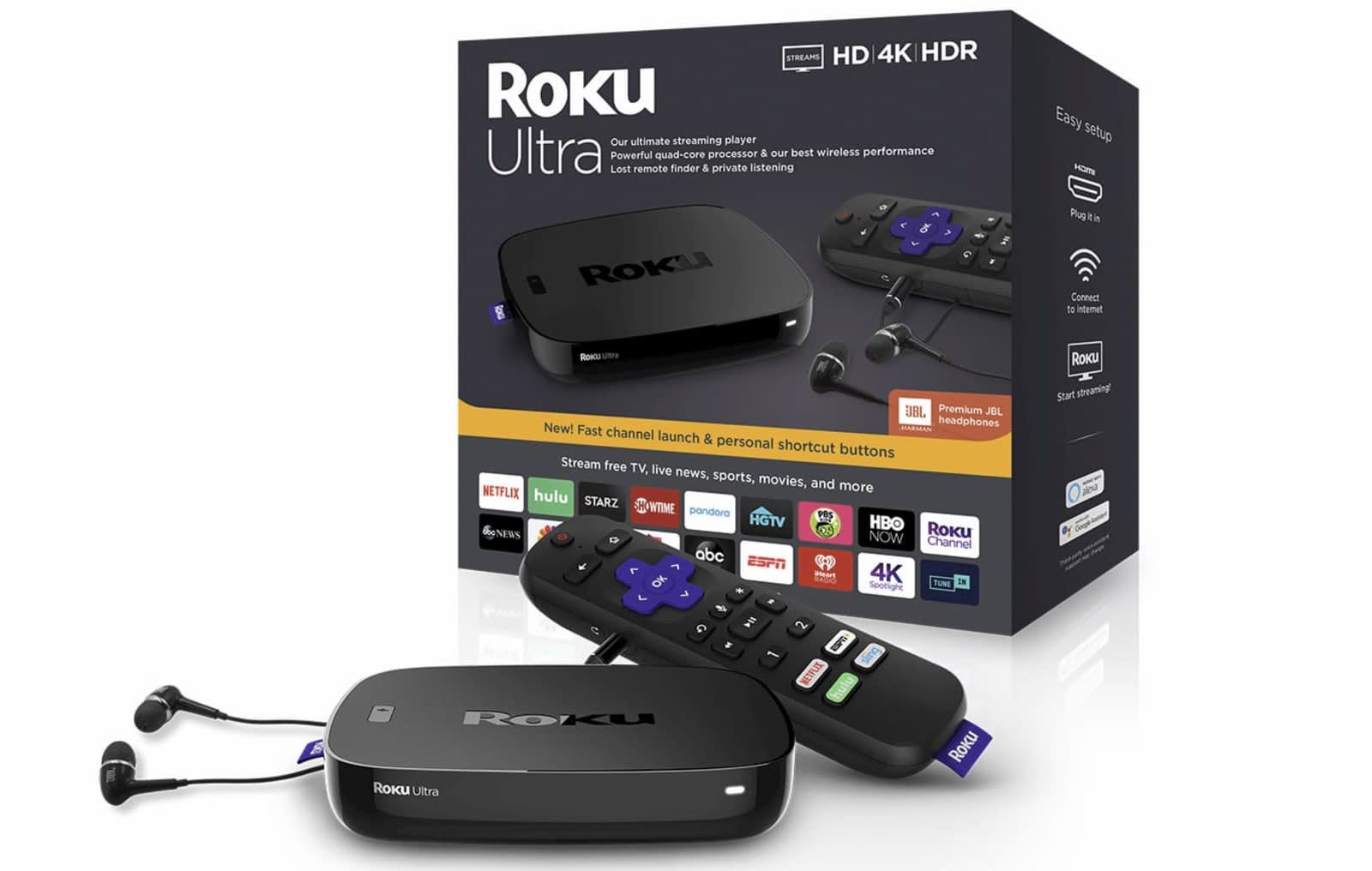 Roku has refreshed some of its streaming players to make them smaller and faster, while it's revealed what Roku OS 9.2 has in store. The latest $99.99 Ultra, which supports 4K and HDR video, should be zippier at launching channels than previous iterations, and it'll come with a remote that has programmable shortcut buttons. JBL headphones are also bundled with the player -- you can plug them into the remote to watch shows without disturbing others.

The revamped Roku Express is 10 percent smaller than the previous model and, because most TVs' USB ports can power it, the device should be more portable and cause less clutter. It'll set you back $29.99, while the Walmart-exclusive Express+, which features the same design and includes the Roku Voice Remote, will cost $39.99. The Streaming Stick and Premiere models haven't changed.

You shouldn't expect Dolby Vision support from any of the devices, however. The company is more concerned with supporting Roku TVs with Dolby Vision. It reasons that folks who pick up Roku devices may already have TVs and other services that support the format. Meanwhile, none of the models have analog outputs anymore. A Walmart version of the Express had that option, but it apparently wasn't selling well enough.

You can pre-order the latest Express and Ultra from Roku today. Express+ will be broadly available at the end of the month, with other devices arriving in October. Elsewhere, the Express, Premiere and Streaming Stick+ should be available in Canada, the UK, the Republic of Ireland and some Latin American countries in the coming weeks.

In addition, Roku OS 9.2 will start rolling out soon. The 4K Spotlight channel has been overhauled for easier access to 4K titles, while the Roku Tips & Tricks channel could help you get more out of your device. The Roku Zones feature will display a curated selection of titles when you search for a genre or subject like "superhero movies" or "comedies." They're arranged into rows, which might focus on new releases or free-to-watch titles.

There'll be new voice control options, including sleep timers, searching by movie quotes and the ability to control multiple Roku devices in your home with Alexa or Google Assistant. You can also say "4K movies" to see a selection of them and control personal files in Roku Media Player with your voice. A shortcut section is coming to the home screen too.

OS 9.2 will roll out to Roku streaming players and the soundbar starting later this month. You might have to wait a little longer to see the new version on Roku TVs, however. They'll likely receive the OS update in phases over the next few months.

In this article: av, gadgetry, gadgets, gear, roku, streaming stick, streamingstick
All products recommended by Engadget are selected by our editorial team, independent of our parent company. Some of our stories include affiliate links. If you buy something through one of these links, we may earn an affiliate commission.