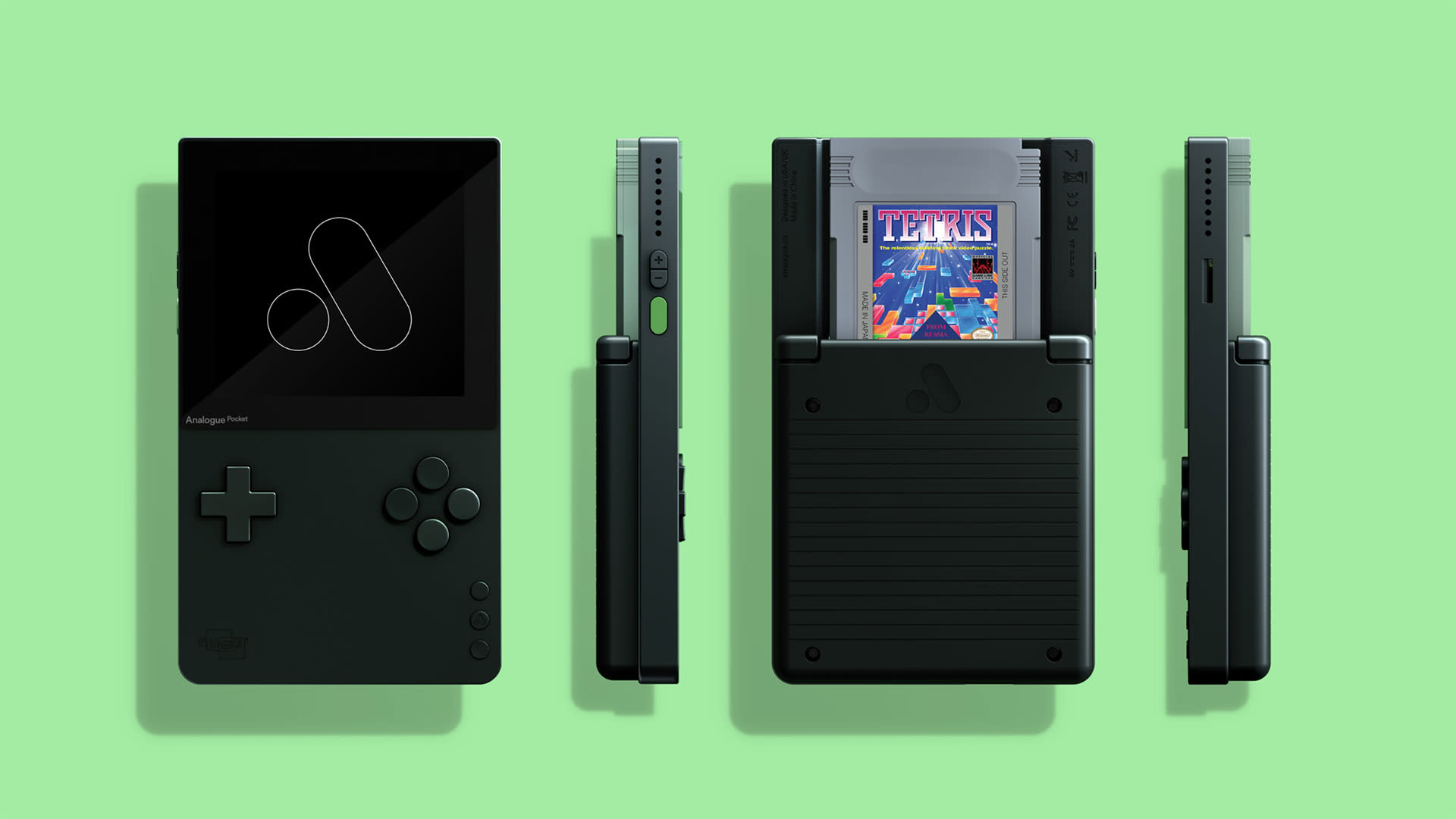 Analogue's $200 Pocket could be the ultimate retro gaming portable

The Pocket is a Game Boy Advance, a Game Gear, a Lynx and much more.

In just eight years, Analogue has transformed itself from a maker of wildly expensive bespoke Neo Geo consoles to a retro gaming giant. Capitalizing on the buzz around Nintendo's Classic Mini NES and the following mini console craze, the Seattle-based company has created premium high-definition consoles based on the NES, SNES and Genesis, all of which have been extremely well received. Today, it's announcing its most ambitious project to date: the Analogue Pocket.

The Pocket is a roughly Game Boy-shaped console that can play any Game Boy, Game Boy Color and Game Boy Advance game, with support for Game Gear, Neo Geo Pocket Color and Atari Lynx coming through add-on adapters. The system has a few more buttons than you'd expect from a Game Boy: There's a D-Pad, four face buttons, two shoulder buttons nestled on either side of the cartridge slot and a trio of small system buttons. All of the controls are remappable to individual users' tastes. Elsewhere, there are stereo speakers, a headphone jack and a lithium-ion battery that charges over USB-C. A lot of attention appears to have gone into the Pocket's display. Analogue CEO and co-founder Christopher Taber told Engadget that, while many all-in-one retro portables use displays that have been around for 15 to 20 years, the Pocket's "modern and sophisticated" panel only began being manufactured in 2018.

More specifically, it's a 3.5-inch, 615-PPI LTPS LCD panel running at 1,600 x 1,440, which is handily exactly 10 times the resolution of the original Game Boy's display on each axis. The resolution choice means you can get a pixel-perfect, full-screen rendition of Game Boy, Game Boy Color and Game Gear games. Atari Lynx titles can also scale perfectly to take up the full height of the display; although the aspect ratio of that console means there will be black space at the sides. For the Game Boy Advance and Neo Geo Pocket Color, there's no way to neatly multiply the resolution, but Analogue will offer its usual suite of display options across every system, letting you tailor how they look.

For Game Boy Advance titles, the more modern display coupled with scaling and filtering could improve the notoriously muddy and hard-to-make-out character models. But all cartridges should benefit from the Pocket's superior panel, color reproduction and brightness. Analogue describes the display as having "pro level color accuracy, dynamic range and brightness," calling it the most advanced ever in a video game system. The company isn't sharing all the technical specifications of the display just yet, but the dimensions and resolution are the same as the premium panels found in Valve's $999 Index VR headset.

Rounding out the hardware is an optional dock, which will use Analogue's renowned in-house scaling tech to put handheld games on your TV with "no loss in quality," according to Taber. It will feature HDMI, two USB inputs for wired controllers and Bluetooth for connecting wireless controllers from companies like 8BitDo. The dock is scheduled to launch alongside the Pocket, but the company isn't revealing the price yet. There are countless Game Boy knockoffs and retro handhelds out there, but the Pocket is different. While all-in-one consoles typically run games through software emulation, Analogue's party trick is and has always been its use of field-programmable gate arrays (FPGA). The company develops its machines by examining the original hardware and circuitry of a console, and then coding an FPGA core to mimic it. Many months (if not years) later, the result is an accurate machine that can play cartridge media directly as if it were original hardware.

Although Analogue pioneered the use of FPGA for gaming, a healthy community of developers has sprung up in recent years, writing code for subsidized development boards. Where the Pocket diverges from Analogue's other devices is that it has two FPGA chips. The first the Pocket uses to support the various systems and games, while the second is a blank slate for others to work with.

Taber said the company will "be providing resources and putting together a lot of cool stuff" for the FPGA community to create cores for the Pocket. That includes access to the company's proprietary scalers and hardware, including the cartridge slot to allow for accessories.

The limit to what the spare FPGA can achieve "comes down to how skilled the developers are," according to Taber. It's worth setting some expectations, though: Mimicking even an NES is not easy, and with every generation the complexity of consoles increases. Even making the leap from NES to SNES adds orders of magnitude more transistors and paths to suss out. There's no reason, though, that someone proficient enough couldn't do what Analogue did with its hardware emulation of the Neo Geo, SNES or Genesis using the Pocket's FPGA, and build a simple adapter to plug in the carts.

These adapters aren't simply hardware that adapts the pins of cartridges into a Game Boy-friendly layout -- although they will do that. Analogue has to write a core for the FPGA that mimics that system's original hardware for each adapter it creates. "When a user moves between systems on our products the FPGA is literally being reconfigured as that system on a transistor level," Taber explained.

For the preservation of video game history, supporting Atari, Sega and SNK's portable consoles is perhaps a bigger deal than creating the perfect Game Boy. Titles for less-popular consoles are more at danger of being lost to time than those made for Nintendos. The Lynx community, for example, relies on enthusiast knowledge to keep systems running when displays die or capacitors burn out. Having a modern device that can play original games as they're intended won't stop Lynx fans from collecting everything they can find, but it does offer them, and others, a user-friendly way to play the system's games.

Nanoloop is a storied electronic music program originally created for the Game Boy in the late '90s. For almost two decades, Nanoloop only ran on official hardware -- retro emulator boxes are incompatible -- meaning a Nintendo Game Boy, Advance or DS. That changed earlier this year when a dedicated Nanoloop device was crowdfunded on Kickstarter.

Taber is a longtime Nanoloop fan and user and reached out to its creator, Oliver Wittchow, to explain the Pocket and discuss a collaboration. The result? The Pocket is set to be the second non-Nintendo device to support the software. More than that, every Analogue Pocket comes with Nanoloop built in -- it's usually sold as a $50 cartridge -- and also has a Link Cable-style port for connecting up to a larger setup.

Nanoloop uses the Game Boy's sound chip to create music straight on the console, but through a Link Cable adapter, it can make the Game Boy a synth or sequencer as part of a larger music setup. Nanoloop 2 for the Game Boy Advance added features and could tap into the Advance's more... advanced hardware. Both editions are widely used in the chiptune world, and there are numerous accessories for expanding your setup that will be compatible with Analogue's console.

While the Pocket doesn't technically have the same sound chip as a Game Boy Advance, it does have a core that precisely mimics the console's hardware. Taber said the version of Nanoloop that'll ship is "tailored for the pocket," with all the same functionality as Nanoloop 2 but a customized UI.

I asked Taber whether it's feasible for Nanoloop to utilize the "chips" in other system cores. His response was "more on that later." If it's possible, being able to switch between various retro sound chips on the fly is a game-changer. Even someone with a passing interest in making music could have a lot of fun tapping into, say, the legendary Texas Instruments sound chip found in the Genesis and Game Gear. Analogue made a name for itself by producing products that typically do one thing extremely well. For years, its takes on various consoles have offered the single best way to play retro games on modern TVs. The company now has a loyal audience, which Taber said, typically buys every product Analogue makes. And it's managed to lower prices considerably by turning to plastics in place of wood or metal. These products remain focused: It's carved out its own niche and largely stayed there.

Producing one product that does a lot of things, then, may seem counterintuitive. But Taber said the Pocket is something the company has "always wanted to do," it's just taken a long time for the company to get to where it needs to be to make it happen.

In retrospect, you can draw a line between each of Analogue's systems and the Pocket. The scaling tech it developed to make low-res NES games work on modern TVs will now offer the display options necessary to support a wide array of consoles. The transition to plastics for its Super NT consoles gave it the materials knowledge to create a (hopefully) durable portable. The Master System adapter packed in with the Mega SG boosted its experience working with multiple cores on one FPGA. The Game Gear core created for the Mega SG's adapter is also going to come in handy. All of these are steps that have led to the Pocket.

The Analogue Pocket will be available in 2020 for $199.99. The dock will be available at the same time at an unspecified cost. Taber said the company is "working really hard" to have at least one of the add-on adapters ready for launch, with the others coming over "the following quarter or two." There's no price for those yet, and there's no word on when pre-orders for the Pocket will go live.

How you react to the Pocket's price will depend on how familiar you are with Analogue's products. Just two and a half years ago, its NES-compatible console launched at $450. Its most recent device, which is inarguably its best-value product to date, was the $190 Mega SG. At $200, the Pocket, with its dual FPGA chips, ultra-high-res display and compatibility with over 25 years worth of Nintendo handheld games almost seems like a steal.

All products recommended by Engadget are selected by our editorial team, independent of our parent company. Some of our stories include affiliate links. If you buy something through one of these links, we may earn an affiliate commission. All prices are correct at the time of publishing.
View All Comments
Analogue's $200 Pocket could be the ultimate retro gaming portable