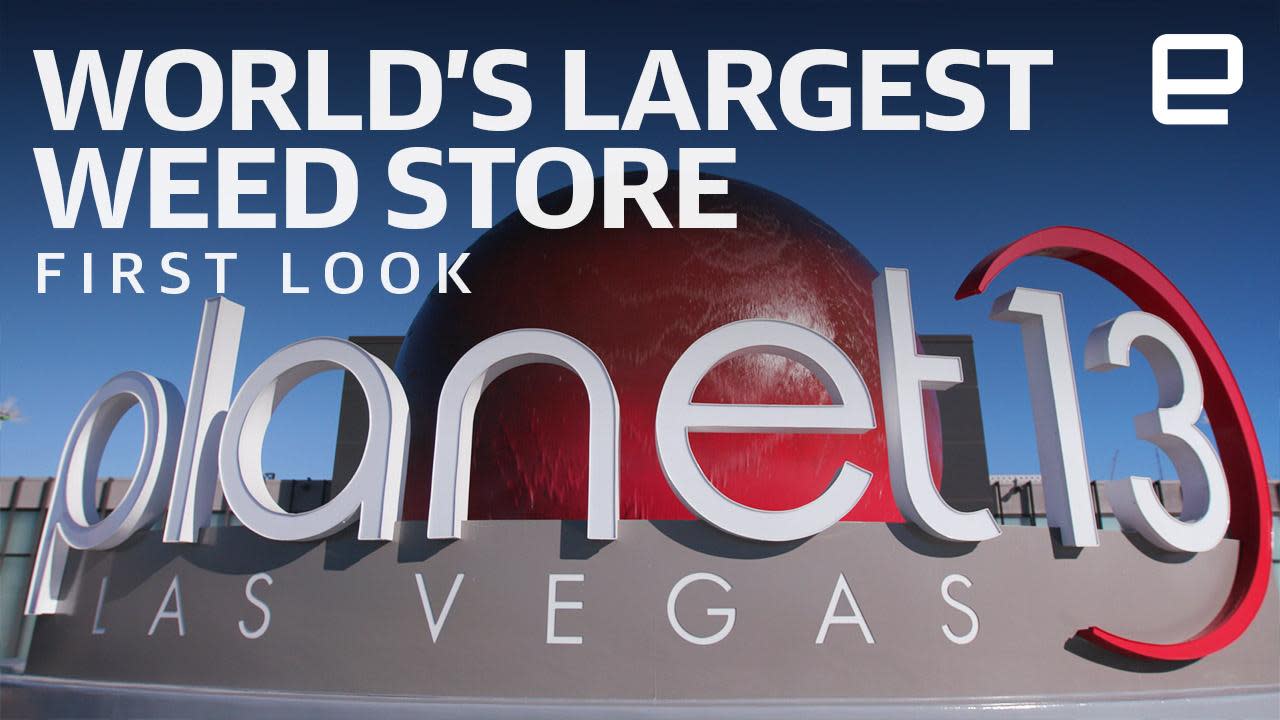 Las Vegas is not a town for half measures. So it's of little surprise that when the state of Nevada legalized recreational cannabis in July of 2017, Sin City took the cannabis dispensary model and added a bit of Vegas' over-the-top magic. The result: Planet 13, a 40,000 square foot dispensary -- the largest of its kind anywhere on Earth.

But Planet 13 isn't just a massive warehouse of weed, even though it does carry hundreds upon hundreds of various cannabis-derived products. The dispensary is an entertainment destination in and of itself with an array of art installations created by designer Todd Moyer and high tech activities designed to delight visitors, whether they've toked beforehand or not.

Customers are greeted by a number of these installations even before they step foot in the facility. The main entrance to the dispensary is guarded by a massive 18-foot diameter LED-studded water globe that emits fog and mist to create a hypnotic and decidedly Bellagiatic effect. Additionally, a series of 15-foot tall acrylic lotus flowers line the roof. At night, visitors to the 24-hour dispensary can actively control the flowers' LED lights via a pair of command consoles located at ground level. You can also make your mark on the building itself via Planet 13's interactive art wall with laser-tipped "spray paint" cans. The effects are especially impressive after dark.

Once inside the building, after signing in with the front desk, visitors can get their Billie Jean-era Michael Jackson on thanks to a pressure-sensitive floor display that reacts every time you step on it. During Engadget's tour of the facility, we walked on digital water across a simulated Koi pond but as David Farris, Planet 13's director of marketing, explained it can be reprogrammed to show a number of patterns, from simple bursts of light to elaborate galactic effects.

The dispensary itself offers guests a pair of visual treats: a persistent "3D Projection Visual Experience" that, as its name suggests, projects 3D laser images onto the room's ceiling; and a bi-hourly aerial orb show in which a number of glowing globes meander slowly through the room high overhead.

The dispensary isn't done yet, though. As Farris explained, the company is already working to expand its facilities to include a coffee shop, restaurant and open production facility where visitors can watch buds being tended and concentrates being made, live. Eventually Planet 13 hopes to build out a lounge where customers can safely and comfortably consume their pot-based purchases. And given that the existing dispensary sits on a 112,000 square foot lot, the company has plenty of room to grow. They're already beginning to host events on site as well. Crews were busy setting up for a VR conference in a meeting hall of the main concourse during our visit.

Now, whether Planet 13's customers will embrace to these expansions remains to be seen. While we were there, visitors didn't pay much attention to the available attractions on their way to the dispensary. Granted, we visited at 9am on a Wednesday when virtually everywhere on the strip was just as subdued.

Still, Planet 13's offerings are certainly unique. The retail space is unlike any dispensary that I've visited before, more like an Apple Store's Genius Bar than your run-of-the-mill pot shop. And with the upcoming expansions, Planet 13 will operate less as a big box retail space akin to Walmart or Costco and more like a proper mall.

In this article: cannabis, ces2019, dispensary, gear, medicine, planet13
All products recommended by Engadget are selected by our editorial team, independent of our parent company. Some of our stories include affiliate links. If you buy something through one of these links, we may earn an affiliate commission.