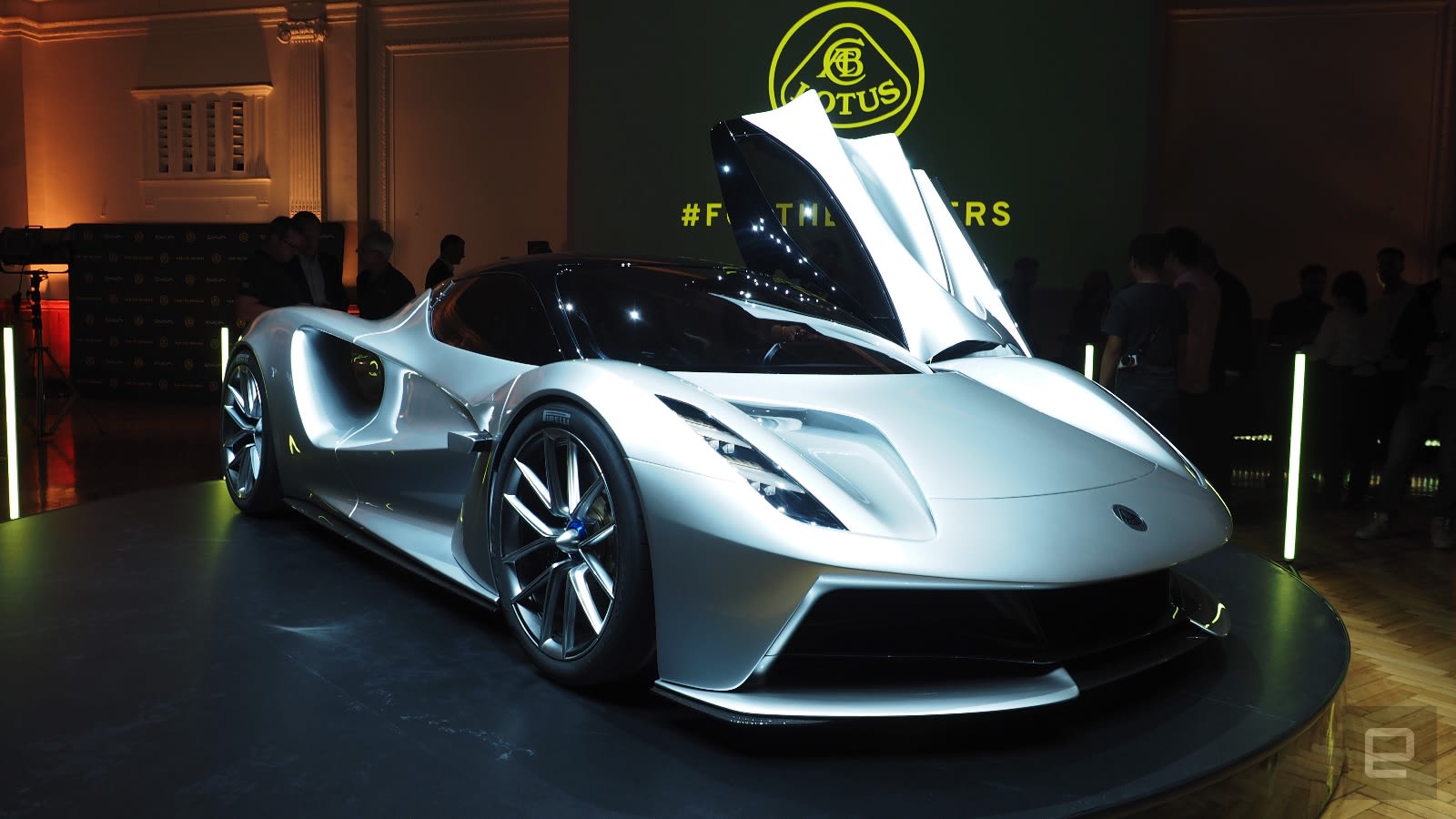 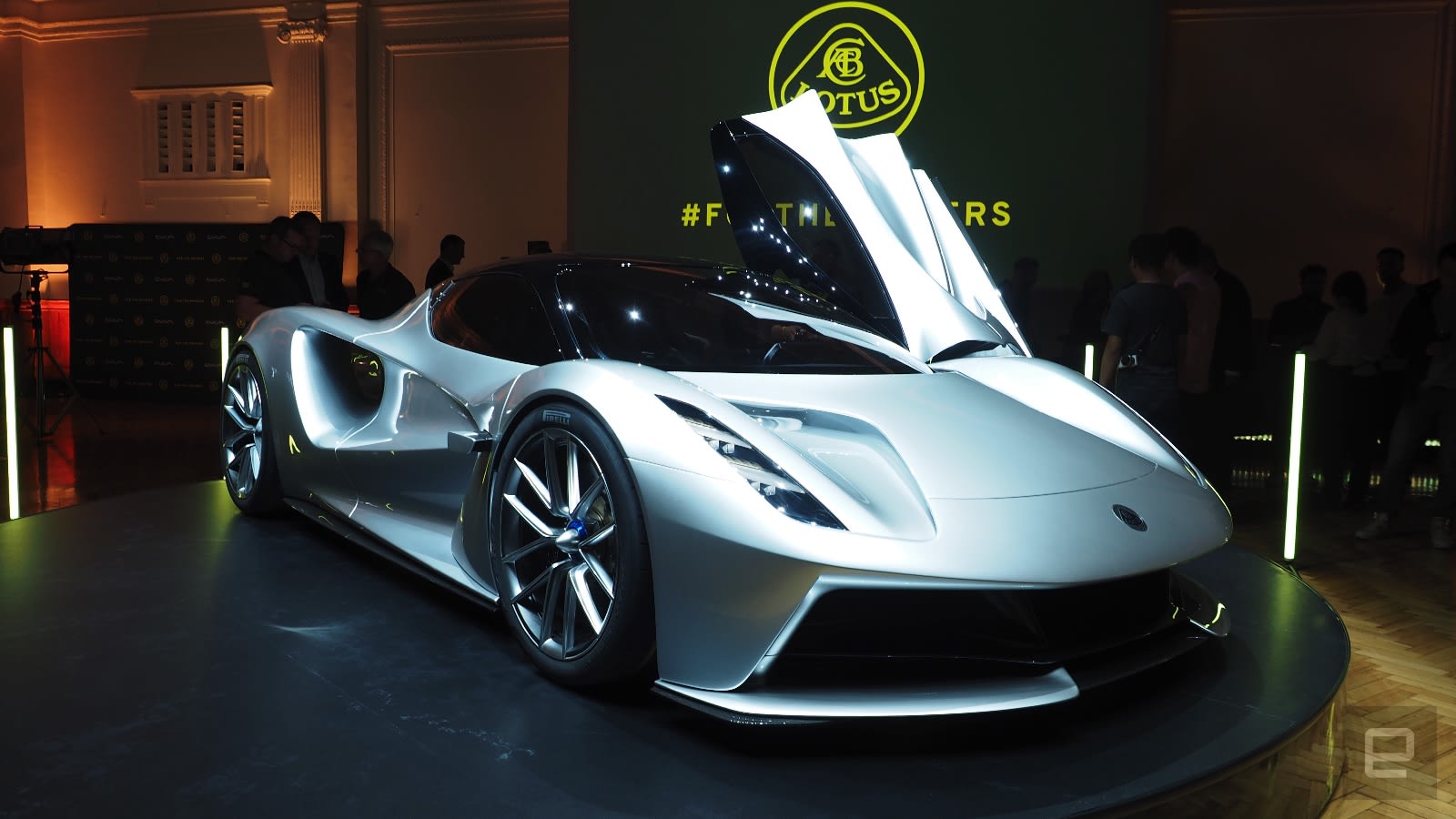 Lotus decided to make its latest hypercar not only all-electric but also incredibly powerful. The Evija is the company's first car with an electrified powertrain, which translates into a disgusting amount of power (2,000 PS or roughly 1973 in horsepower).

For Lotus, the car represents a new beginning. CEO Phil Popham said the Evija will "re-establish our brand in the hearts and minds of sports car fans." For everyone else, it's a car that wants to go toe-to-toe with Tesla's Roadster in every way possible. Except for affordability.

This is apparently what you get when you pay £1.7 million (over $2.1 million) for your next EV. As you've already noticed, the Evija looks like a Lotus, even if it lacks a fuel tank. It's a hypercar, which means nothing beyond it being a top-tier sports car that's going to turn heads. With this project, the team was apparently inspired by rock formations ("carved by nature over the centuries") for the curves of the Evija's initial designs. The team also looked to Le Mans race cars to hone the vehicle's design around airflow. They dropped traditional door mirrors to help reduce drag, swapping them for cameras integrated into the front wings, while designing the car to optimize downforce. Russell Carr, Design Director, said the Evija is "a timeless design with exceptional amounts of downforce." 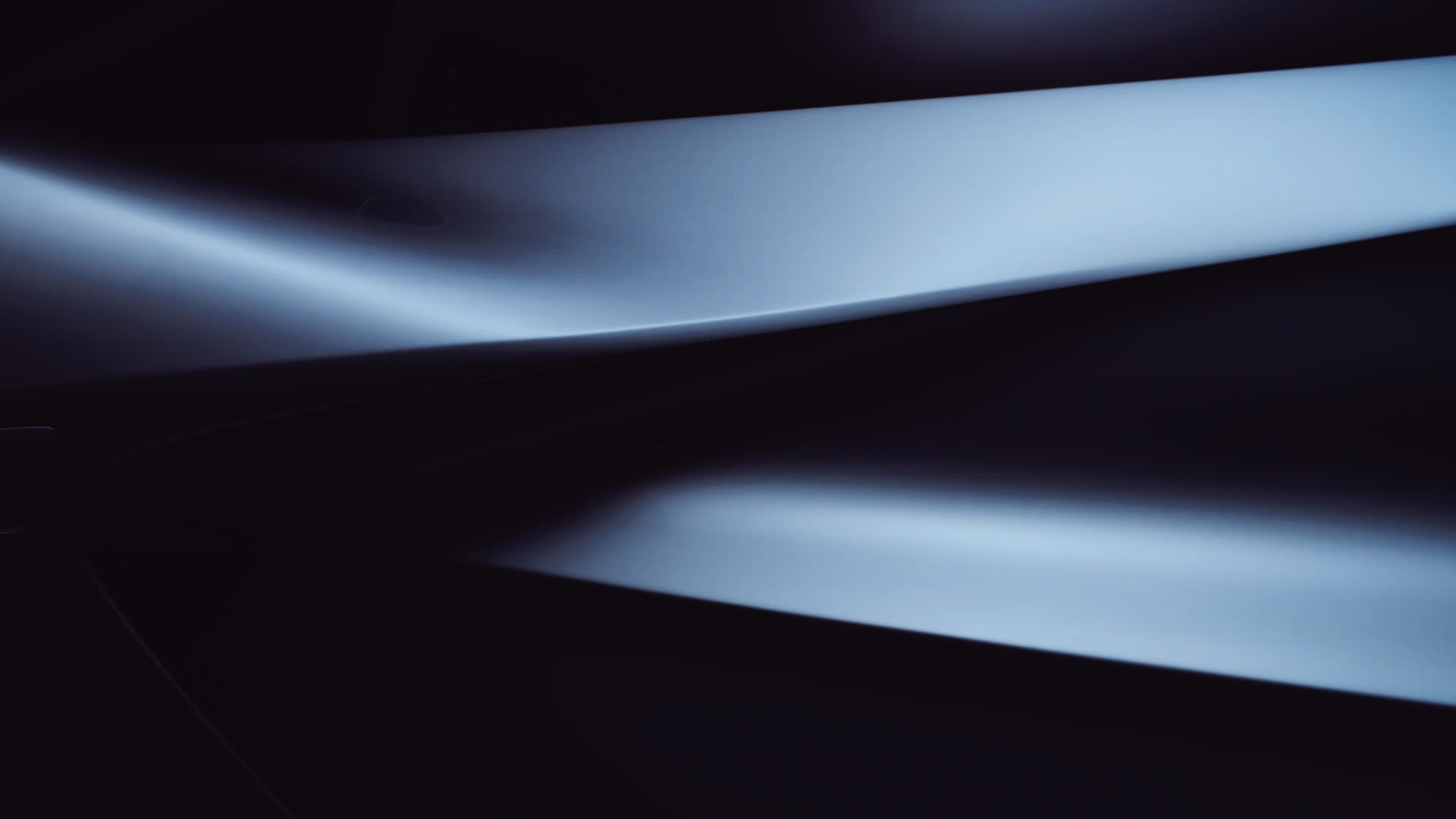 And that's something it'll need to stay on the road; Lotus says it can go from 0-62MPH in under three seconds and hit speeds of over 200MPH. Tesla says its new Roadster, by comparison, will do zero to 60 in 1.9 seconds, and reach its top speed of 250MPH in under nine seconds. Lotus' Evija will take nine seconds to hit roughly 187MPH.

Inside, inspiration is taken from 1950s race cars, with a 'floating wing' dashboard which you can see from outside the car. According to Design Director Russell Carr, it "represents a typically Lotus approach because it performs multiple functions". Not only does it house the instrument panel and air ducts, but it's also core to the support structure of the car. In-person, it's glossy, beautiful and expensive-looking. The contours of the sides mean that there are literally holes that punch through the profile of the car for the sake of air flow, and presumably, style. 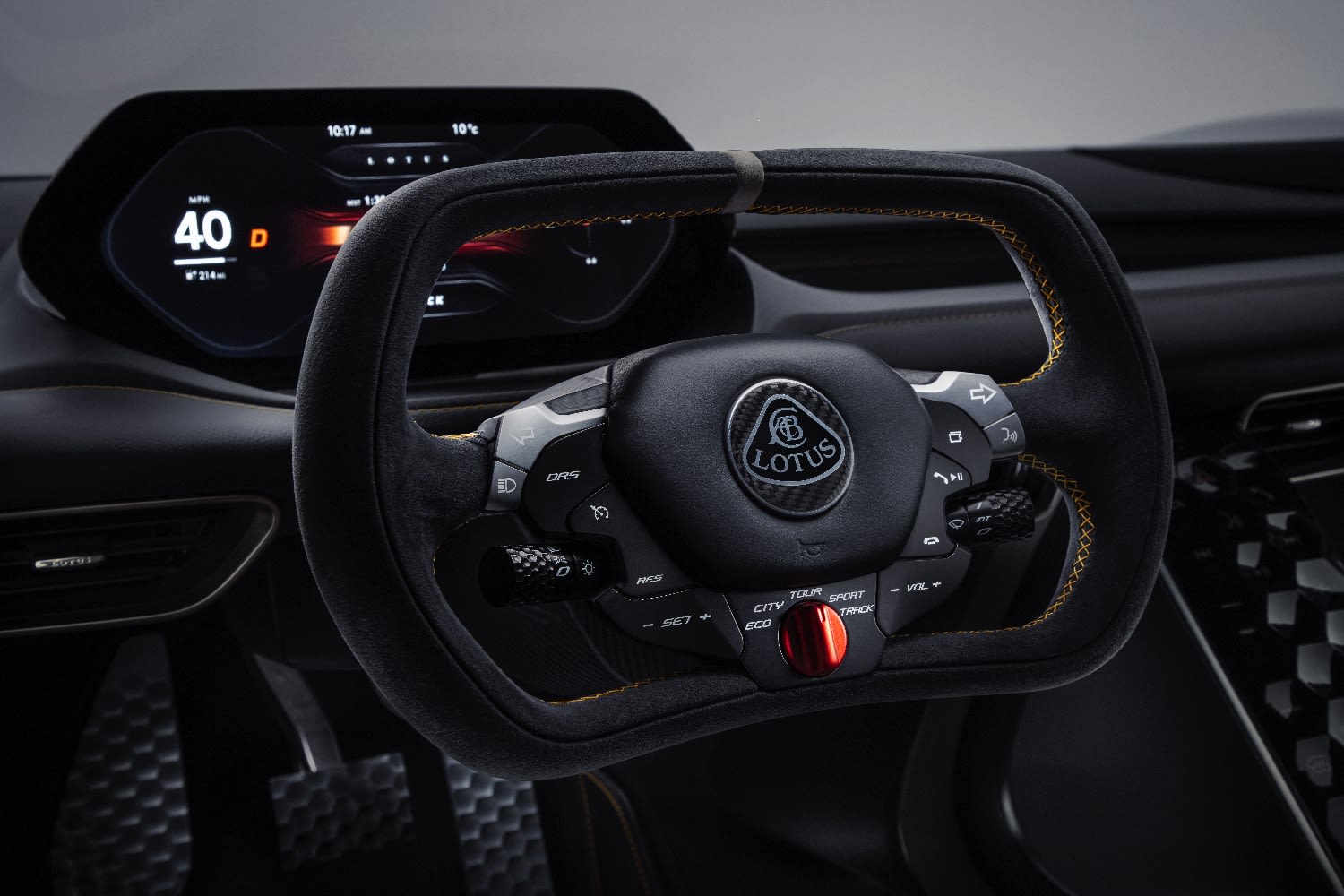 Nothing better represents Lotus' attention to detail (and the pomp and ceremony) than the design of the steering wheel and dash, which attempts to evoke F1 imagery and sports cars of yesterday. The wheel itself is finished in luxurious Alcantara (there's a leather option too, don't worry), with a mode controller in the steering wheel's center to swap between Range, City, Tour, Sport and Track. Just behind the steering wheel is a digital display with all the hypercar's vitals -- and nothing more. It's the only screen, and Lotus have intentionally made it unfussy, broadcasting only essential functions and information.

More controls, in the center console, have touch-sensitive haptic feedback buttons, with light tracing the buttons as your fingers glide over them. Lotus doesn't want you to forget that this, sir or madam, is a luxury car.

Perhaps the Evija's most impressive on-paper specification is to do with a different type of speed — how fast it takes to charge. The car can, using a 800kW charger, fully replenish itself in nine minutes.

Which is amazing, except for the fact that such chargers aren't commercially available, anywhere.

Back in the real world, using charging technology that actually exists (a 350kW charger is currently the most powerful), the Evija's charge time will still only be 18 mins to get to 100 percent. Range-wise, the car can run up to 270 miles, based on the New European Driving Cycle Combined Cycle.

Back to the electric powertrain, developed by Williams Advanced Engineering, which not only works on F1 cars but also Formula E racers too. According to Lotus, its mid-mounted battery pack is the lightest, most energy-dense, electric power package ever fitted to a road car — and as a sign of that, the Evija is shooting for a target weight of 1680kg. If it gets there, Lotus will have made be the lightest "pure electric" hypercar in production.

Given the price, the Evija is a not-shocking limited run: only 130 of these will hit the roads around old money, start-up millionaires and the other one-percenters. This will be the first Lotus car coming from its new owners, Geely, which also owns Volvo. That could mean if the car is a hit, that less pricey cars for mere mortals like us will get the drip-down effect of this carbon-fiber encased halo car, with at least some of the specs and features.

Production on the Evija will kick off in 2020.

In this article: electric vehicle, ev, evija, gear, hands-on, hypercar, lotus, lotus evija, supercar, transportation, volvo
All products recommended by Engadget are selected by our editorial team, independent of our parent company. Some of our stories include affiliate links. If you buy something through one of these links, we may earn an affiliate commission.